The headlines about local news are confusing at best. While we read that reporters and editors are losing their jobs by the hundreds, we see stories suggesting that local news is critical. In fact, local news has never been more important to grassroots democracy and to our daily lives. According to a recent Poynter Media Trust Survey, a vast majority of Americans, of every political stripe, overwhelmingly trust local news reporting—whether it comes from newspapers or television. Then why is it going away and how can we save it?

More Americans get their news from local TV more than any other platform. However, TV news outlets and newspapers are closing, consolidating, or cutting jobs at an alarming rate. Across the country, ‘news deserts’ have emerged. These are communities that have lost all local coverage. Their numbers are on the rise. There are 1300 ‘news deserts’ identified in the most recent count by the University of North Carolina’s School of Media and Journalism. The researchers conclude: “The stakes are high…our sense of community and our trust in democracy at all levels suffer when journalism is lost or diminished. In an age of fake news and divisive politics, the fate of communities across the country—and of grassroots democracy itself—is linked to the vitality of local journalism.”

Local News is at Risk

When local newspapers close, political polarization ensues. When readers have fewer outlets to learn about their local politicians, they take cues from the national outlets. There people are exposed to party politics at its most oversimplified and amplified which overwhelm the important issues. According to the Journal of Communication, voters then transfer those feelings about national politicians onto those running back home.

In 1992, 37 percent of states with Senate races elected a senator from a different party than the presidential candidate the state supported. In 2016, for the first time in a century, no state did that. “The voting behavior was more polarized, less likely to include split ticket voting, if a newspaper had died in the community,” said Johanna Dunaway, a communications professor at Texas A&M University, who conducted the research with colleagues from Colorado State and Louisiana State universities.

Consolidation is Not the Answer

The company which owns the largest number of stations is Sinclair Broadcast. They may not be a household name, but they should be. Sinclair’s reach covers three-fourths of U.S. homes. The company has been singled out as having a political agenda, where management orders its local stations to air biased political segments produced by a corporate news division. In some cases, anchors have been compelled to read from scripts that hauntingly echo what we hear from the White House, which excels in denigrating the news media. 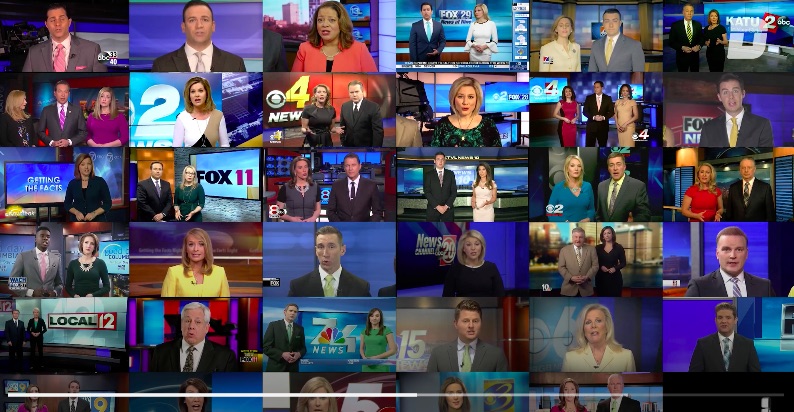 News anchors across America reciting from the same script. Video and image: Deadspin.

Even when local news outlets remain, their gutted staffs rely on syndicated services to supply newsfeeds instead of assigning reporters to cover local government or institutions. Duke University analyzed the news stories from 100 randomly selected communities last year and found that a paltry 17 percent of the stories were actually about the community where they were presented. Think about how many times you see a local news story but what you get instead is the latest tweetstorm from the White House. When there is no coverage of routine local government meetings, whether about budgets or bonds, there is evidence that spending on municipal projects skyrockets.

The Impact of Local News

Good local news is not about the highly sensationalized, disaster driven story but rather keeps a sharp eye on city hall, the statehouse, the court house, the schools. Local news helps us get to know our neighbors and what is happening in our communities. Day-to-day there is no other aspect of journalism that has such a large impact. Think of early warnings for deadly tornadoes and hurricanes or reports on the dangers in the water supply. Local news can save lives.

For example, this year KNTV, the NBC local affiliate in the California Bay Area reviewed hundreds of surveillance videos. These videos revealed violent attacks against public bus drivers despite district claims that assaults had declined. The drivers were punched, choked, and even threatened at gunpoint. The series brought public attention to the problem which subsequently led to the transit authority installing safety shields and surveillance monitors to help protect drivers and keep passengers safe. That series, Drivers Under Siege, won the prestigious 2019 duPont Columbia Award for excellence in journalism. 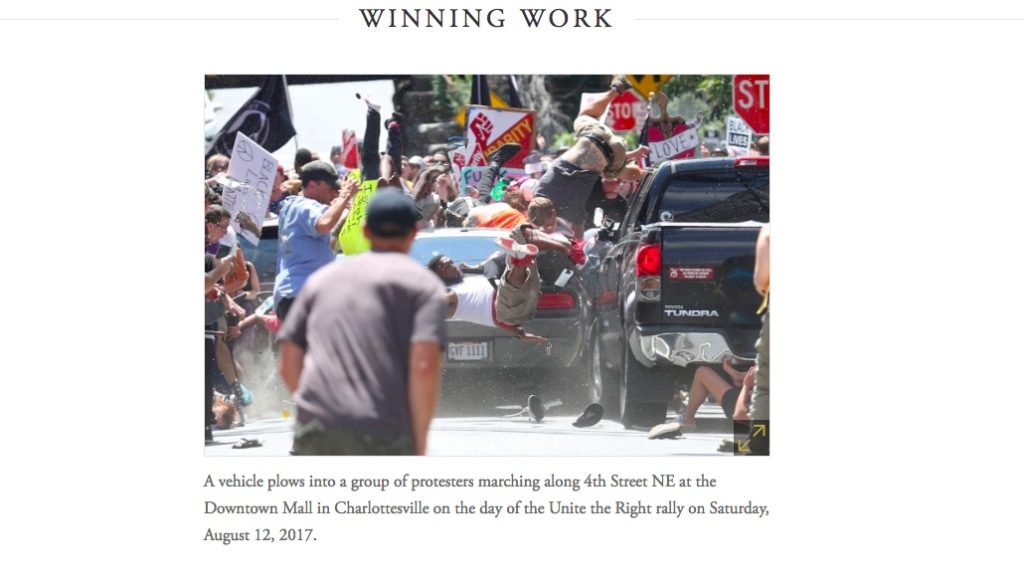 Ryan Kelly of The Daily Progress captured a car attack at the Unite the Right rally. Image: The Pulitzer Prize website.

The Pulitzer Prize in 2018 for Breaking News Photography was won by Ryan Kelly of The Daily Progress in Charlottesville, Virginia with this front page photo.

Staff photographer Kelly was on the scene at the Unite the Right rally to capture the horror and create an indisputable, indelible record. It became hard evidence that a white supremacist turned his car into a murder weapon that killed paralegal Heather Heyer. That photo may not have existed if not for the funding of Berkshire Hathaway.

The historic Charlottesville Daily Progress, founded more than a century ago, is now the last remaining daily newspaper left in the entire region. In the last few decades, the paper has staunchly weathered many harried ups and downs: surviving staff cuts, multiple buyouts, and ownership changes. That means we all owe investor and billionaire Warren Buffett, CEO of Berkshire Hathaway, a big thanks for supporting a local newspaper. But whether it is Amazon CEO and billionaire, Jeff Bezos, who owns The Washington Post or doctor and billionaire Dr. Patrick Soon-Shiong who owns The Los Angeles Times, we can’t just leave the news business to the rich guys. It is all of our responsibilities and I don’t mean as citizen journalists—I mean as financial supporters. How can it be that only 14 percent of us pays for our news and most of us think incorrectly that news outlets are financially healthy?

A Personal Experience and the Impact of Local News

When I was the senior broadcast producer at 20/20, long before the #Metoo movement, correspondent John Ferrugia then the lead investigative reporter at Denver’s KMGH-TV uncovered sexual assaults of female cadets at the U.S. Air Force Academy in Colorado Springs. With additional reporting, John brought the local story to 20/20 to reach a larger national audience. The outcry from the story initiated Congressional hearings and a leadership change at the Academy. Also there are now sex assault officers/teams on most U.S. military bases around the world as well as at all the service academies. I am happy to say that John is still at it, now at Rocky Mountain PBS, where he is helping to reinvent local news. In a unique arrangement, he leads an investigative team funded in part by donors and underwriters that creates content for his public TV station and—here is the unusual part—a local commercial station which pays for the content. Stories with national angles are expanded and aired across the country by PBS NewsHour and National Public Radio (NPR).

How Does this get Better?

Digital news platforms have not performed well and many are closing too. However, the public/private partnership at Rocky Mountain PBS may provide some clues. Foundations as well as philanthropists have started plowing millions into journalism. Early in 2019, the Knight Foundation alone invested 300 million dollars to focus on the future of local news. 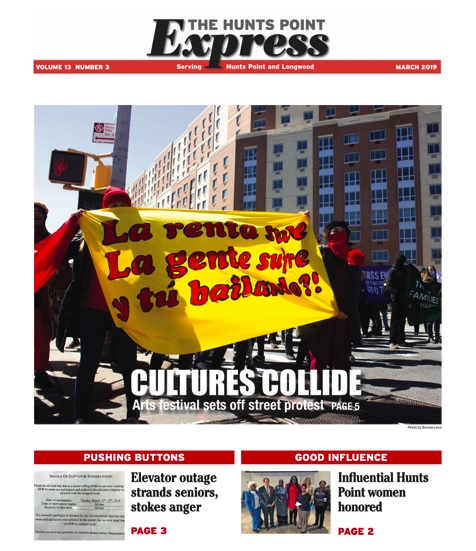 In New York, where I live, Craigslist founder and philanthropist, Craig Newmark, has endowed the City University of New York’s Graduate School of Journalism. Newmark’s support for local news has trickled down to the Bronx and a school where I tutor for the literacy nonprofit Reading Partners. It is in the Hunts Point section of the Bronx, an area that surely qualifies as a ‘news desert.’

In the school lobby, as I signed in at security, I could not resist picking up what looked like a free neighborhood paper. The Hunts Point Express is a monthly and can be found at schools, community centers, and housing projects. I tracked down the editor Joe Hirsch who said that as recently as twelve years ago he had plenty of reporting competition in the neighborhood. There were reporters from The New York Times, The Daily News and the local news site DNAinfo. Today his paper stands alone and covers critical issues like homelessness, unemployment, education, and the environment. Hirsch continues his commitment to community journalism in the Bronx, a borough that barely makes its way into city news, except for an occasional over-sensationalized crime story. The Hunts Point Express is funded by advertising, private individuals, and none other than the Craig Newmark Graduate School of Journalism at the City University of New York (CUNY).

Maybe all news is local. Or maybe it should be.