Traveling, displacement, and migration have always been a part of human beings. When people have moved from one place to another, their culture has met the one of their reached destination, influencing music. Many composers have been influenced and inspired by migration, either because they have moved themselves, or because they have seen someone else do it.

One piece inspired by migration is In the Steppes of Central Asia by Alexander Porfiryevich Borodin.

In the Steppes of Central Asia

This symphonic poem was composed to celebrate Alexander II of Russia, who had largely expanded the Russian empire. In this orchestral piece, Borodin represents both Russian and Oriental culture using two musical themes. During the piece, another theme acts as a background, the theme of the travel.

The first theme of the symphonic poem describes the Russians. It is firstly assigned to the Clarinet, and then to the French Horn.

The second theme describes the Asians and appears after the exposition of the first theme, played by the English Horn.

The third theme is the theme of the travel, which is played by the strings for the duration of the piece.

The three themes appear at the same time during the second part of the symphonic poem. Here, the two cultures meet in the steppes of Central Asia. 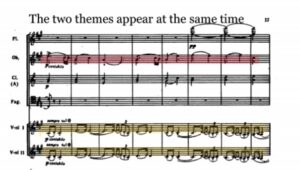 In red the Russian theme, in yellow the Asian theme.

At the first execution of this piece, a sentence was written by the composer on the hall program that summarizes the metaphor of the symphonic poem:

“In the silence of the monotonous steppes of Central Asia is heard the unfamiliar sound of a peaceful Russian song. From the distance we hear the approach of horses and camels and the bizarre and melancholy notes of an oriental melody. A caravan approaches, escorted by Russian soldiers, and continues safely on its way through the immense desert. It disappears slowly. The notes of the Russian and Asiatic melodies join in a common harmony, which dies away as the caravan disappears in the distance.”

Chiara Panigutti is an 18 years old student of Liceo Caterina Percoto in Udine, Italy. Her studies focuses on music. Starting 2021, she also studies at the Conservatorio Jacopo Tomadini in Udine. Chiara is part of the youth editorial group of the Messaggero Veneto scuola and part of the impactmania student internship.