impactmania spoke with professor Lydia Contreras about what had to happen for her to win the Mellichamp Award for Emerging Leaders. Contreras, chemical engineer, at the University of Texas, Austin, is originally from the Dominican Republic, and grew up in the Bronx, New York. She initially dealt with communities unsupportive of her career track—her aunt thought becoming an engineer would an “ugly career” for a girl, “walking around in hard hat and hammer.”

Lydia, what impact are you trying to realize in human health and biotech?

We know that depending on where we live, what kind of food we have access to, what kind of air we breathe, what kind of social interactions we experience, impact our health. I am passionate to understand the biochemical molecular basis for this, where we can think about this as network biology, and that’s perturbed by these external environmental circumstances.

Give me an example. What are you researching specifically?

One of the examples would be the chemical we are exposed to. Chemicals we breathe through the air; chemicals in our waters; chemicals we put on our skin. For years, there’s been a lot of correlative work about the impact of these chemicals on health.

There have been toxicology studies of how that impacts rats and epidemiology studies of our populations. How it affects our cardio health or lung health. One of the things we really started doing is looking at the molecular bases of what really happens when you take lung cells and you start exposing them to toxicity in the air, toxic chemicals. When you start exposing them to things that are thought to be harmful. Can we trace how our molecules are literally changing in real-time and how that translates to deviations from healthy behaviors? Can we go all the way back and link this air chemistry to molecular chemistry?

Ultimately, the question is how these molecules behave in us to make healthy proteins, to make healthy pathways, to dictate a healthy behavior? That research is to really gain a mechanistic understanding. It’s something that can affect the way we regulate behavior to protect fellow human beings from harm around the world. It can really impact how we understand privilege—who lives where and who’s expose to what.

What are some examples of what you’ve seen that’s known to be damaging to our health?

One of the most interesting things we realized is that second hand smokers are exposed to harmful smoke much more than the smoker him or herself. That is because the reactions that happen between all the smoke air and the general air leads to a lot of toxins. There is a lot of interest in COPD [chronic obstructive pulmonary disease] and lung disorders that stem from smoke—so regulations have changed.

We are starting to realize that lung tissues can be induced by a lot of other chemicals that we barely even realized we’re getting exposed to.

“We are starting to realize that lung tissues can be affected by other chemicals that we barely even realized we’re getting exposed to. For example, our cells start looking damaged, phenotypically. They start disintegrating their healthy patterns of behavior, de-attaching from one another. That has been pretty fascinating to us—how we can track those changes at the molecular level and start really understanding how things that we are exposed to impact to our health at the cellular level.”

Is there a specific chemical that you’re focusing on?

We started our work with two particular types of chemicals. One of them was aldehydes that are in the air. This is the result of air pollution. We know pollution is a big problem for people’s health, and especially in urban cities. The other one that we’ve been recently studying is formaldehyde, which is very commonly used in industrial settings. It’s also used in a lot of hair products that especially women of color use in their hair. And so we’re really starting to use those as two model chemicals. 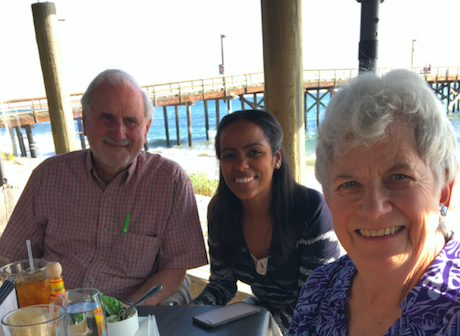 At the University of Texas, Austin, you run a lab with two dozens undergraduate students, a dozen graduate students, and recently was appointed to select incoming students for the overall chemical engineering graduate program. Tomorrow, you will be receiving the Mellichamp Award for Emerging Leaders. What had to happen for you to be where you are?

That’s a good question Paksy. I am an immigrant. My family is from the Dominican Republic. We came to New York City when I was 11 years old. I started out in bilingual classes. My English was pretty theoretical British-English, the type you learn in some remote part of the Dominican Republic. And so, that was the barrier to overcome when we came here. I grew up in the Bronx with pretty much working families only. I had the opportunity [through scholarships] to change environments. In private school, I saw a much more enriched system of education. It opened my eyes to the fact that we indeed have great resources in this country.That really started my interest in sort of connecting more of a scientific discovery. I wanted to understand more systematic, quantitative, and mechanistic ways to access different resources and how these things could actually affect people’s health.

I grew up seeing a lot of people around me having heart attacks, a lot of cardio-vascular problems, a lot of lung problems. I started to see these signs as a way to objectively bridge a lot of those gaps that exist amongst people all over the world.

There has been an uptake in women and women of color studying STEM. Even though they graduate, there is what’s called a ‘leaky pipeline,’ which does not translate in a similar increase in women entering or staying in STEM fields. Can you talk to me about how you were able to overcome graduating and entering that science and technology fields.

I’ve been very fortunate to have a lot of things on my side. I even had to overcome the thinking of people in my own family about being an engineer. I was told being an engineer is an “ugly profession.” A family member described to me how I would walk around in blue overalls and a hard hat with a hammer. They really didn’t understand how broad engineering was. It starts with the images you see and the stories you get told. You don’t envision yourself as a scientist.

Then, I’ve had a lot of encouragement around me, people that really took their time and said, “Lydia, you are capable of doing this. You can be successful by giving it an extra push.”

The environment around us in terms of it being still a pretty heavily male dominated environment can be discouraging. I’ve had a lot of people who have helped me see challenges as huge opportunities. It made me think, Well, if that’s the way things are, let’s see how I can change it.

Since we need cross-sector solutions to solve today’s complex societal issues: who do you collaborate with?

You are a mother of twins. What would you advise your children if they would like to become scientists?

I would be thrilled! It is a very rewarding career. I would advise them to remain persistent in their dreams and to nurture their creativity; this is the only way we can find solutions to challenging unsolved problems.  I would also advise them to embrace learning and exposure to fresh and different perspectives.  Lastly, I would advise them to pursue meaningful collaborations in their work as something that can truly expand their universe of ideas and allow “ bigger” thinking…as long as they are willing to: grow, step out of the comfort zone, challenge themselves, and value the visions of others.