That direct line between Friuli and California. A virtual exhibition by impactmania.

Online appointment on 18th May with the program given birth by the partnership with the University of California, Santa Barbara (UCSB).

Almost at the end of the school year and the publication of our weekly insert, one of the most life-changing experiences lived during the pandemic is being finalized: the internship impactmania in partnership with the University of California, Santa Barbara (UCSB).

Let us explain in this way what it dealt with. Founded by Paksy Plackis -Cheng, whose programs of social, cultural and economic impact have been mentioned even at the UN, impactmania gave us the possibility to dig deep into the relationship between the “Human Mind and Migration”. We empathized four intriguing themes, impactful and impacted nowadays by migration flows: second generation of migrants, music, names, and social media.

Reaching an unexpected variety of women and men, who experienced or are still experiencing migration in their existence, due to professional reasons, school, or simple life choices. Undoubtedly a paramount opportunity, “A precious resource not only for the young adults, but also their community”, as Francesca Milocco thinks, who from the Netherlands, where she is finalizing her PhD in Chemistry, coordinated our activity and made many surprising interviews possible.

It reached not only Italy, but also foreign countries: our survey did not have great limits of space and our curiosity was repaid, meeting after meeting.

As a matter of fact, we developed a relevant awareness of the world, which is now — more than ever — required to understand contemporary issues and their dynamics. And it was precisely this aspect which thrilled our editorial staff of teenagers from Friuli Venezia Giulia, forced to stay at home due to the pandemic, but focused on diverse nations, using technology to interview the ones we would had never imagined reaching. 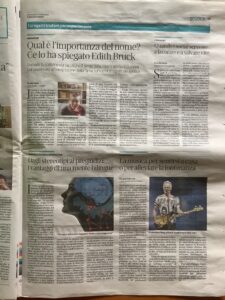 Being a partnership between UCSB with its young mentors and our group from Friuli, English was the “lingua franca” implied to communicate.

“The chance to work with oversea students was a formative possibility to refine my English,” explains Giacomo Mastronardi from Messaggero. Hence, an excellent result for the language skills learnt at school, which were provoked and improved thanks to impactmania.

Thus, full-fledged connections were shaped, red threads which made us — the young adults — closer to inspiring figures for our future.

Denida Doda, one of the student mates of Messaggero Veneto Scuola involved in the project, tells us: “After all, we always find people who continue to work, even in ‘hard times.’ They continue to give a contribution to our society, so that tomorrow becomes a better, renewed day. I could interview those people, such as Professor Iacoboni, who is conducting his mirror neutron research in California, and the witness of Shoah Edith Bruck.”

It is possible that you are wondering how the partnership between Messaggero Veneto Scuola and the Californian University was given birth. Then, it is curious to discover that the idea was first thought in the mountains of Friuli which hosted  the Science Festival Nanovalbruna last Summer, where some of us will take part as press office from the 19th to the 24th of July 2021.

Precisely in that occasion Paksy and our head journalist Gabriella, both full of energy and resourcefulness, decided to propose to us the internship impactmania, catching from the very beginning the attention of the ones who were present in the district of Malborghetto.

“In those days in Valbruna, during meetings with experts and nature excursions, I would have never expected to get in touch with Paksy from California and to hear of a possible internship impactmania between Messaggero Veneto Scuola and UCSB,” Chiara Zanella, a fellow of our editorial staff, states.

At Nanovalbruna was also involved Martina Chirico, a student of University of Trieste who realized in the last months some articles about our project, which appeared on the website www.impactmania.com.

“The program in a word? Novelty. For me it was the first time I had to compose articles to publish on websites and social media. I learnt a lot reading what you prepared and told me”.

Landed at the final destination of the virtual travel between “Human Mind and Migration,” we officially announce a hugely considerable date for the ones who contributed to impactmania.

On May 18th, 2021 at 6 pm (Italian time zone) we will show the internship products in a global online exhibition, which can be reached through the link https://ucsb.zoom.us/my/paksy if you are interested.

Nevertheless, if you cannot join us, we do kindly invite you to browse the page www.impactmania.com, where the interviews we prepared during the program were published in English and Italian.

Perhaps you will be surprised to see how so many of us managed to deal with complex and current themes such as migration, not only using the mother tongue but also a foreign language. Consequently, it is clear that in a year full of harsh difficulties to tackle, impactmania was a pleasant challenge we overcame with massive pride and constant determination.

The article was written by a student from Messaggero Veneto Scuola for the newspaper. It appeared May 12, 2021 in the newspaper with a circulation of 43,000+ and 140 schools. Here is a link to the first part: the second page of the spread is behind a paywall. Approved republishing in English by MV.