impactmania is learning from people who are sharing their special relationship with a mountain. Alessandro Minigher gives us a glimpse of life in the Julian Alps, a mountain range of the Southern Limestone Alps that stretch from northeastern Italy to Slovenia.


My Story in Valbruna, Italy
A Mountain Wonderland

No prayer, no creed,
makes man more devoted
than the solitude of a wood rustling in the wind,
or the free proximity to the sky
on the peaks of the mountains.

My name is Alessandro Minigher, I am 24 years old and I am a physicist, specialized in physics of the Earth and the environment.

My life is going to turn into a pleasant and curious oxymoron: soon I will start working as an oceanographic modeller, but I grew up in the mountains.

I could spend hours talking to you about my studies and my interests, but the best way to contribute to your project is to tell you about Valbruna, the small mountain wonderland where I grew up. Today I will have the honour of being your local guide: I will take you on a short journey, during which you will discover Valbruna and the Valcanale, the enchanting valley in which Valbruna lies. Are you ready? Come with me, let’s immerse ourselves in the uncontaminated nature.

Valbruna (Wolfsbach in German, Ovčja vas in Slovenian and Valbrune in Friulian) is a small Italian village located in the mountainous region of the Julian Alps, at 807 m a.s.l. More precisely, Valbruna lies in one of the valleys of the Eastern Alps, namely the so-called Valcanale, which is dominated by the Carnic Alps, the Julian Alps and the Karavanke. This means that, although this valley belongs to Italy (Friuli-Venezia Giulia region), it borders with two other different countries, namely Austria and Slovenia. Due to this peculiarity, the Valcanale is a sort of melting pot, where the communities of the three different countries mentioned above meet and share, especially for historical reasons, various popular traditions.

Some of the main popular traditions that are practised in the Valcanale are listed, and briefly
described, below [1]:

• San Nicolò e i Krampus – San Nicolò is a good Saint who has the task of rewarding or punishing — assisted by the Krampus (evil and demonic beings) — young people. In several villages of the Valcanale the rite is celebrated on December 5, with the visit — house by house — of the Saint and the Krampus. In other villages the festival takes place on different dates and/or in more spectacular ways;
• Sciapa (or Brina) – This ancient rite takes place on December 27 in the small village of Ugovizza, where a group of young people (namely those who have come of age during the year) wanders — from house to house — wishing their community a Happy New Year. The wish occurs through the display of a branch of silver fir, called sciapa (or brina), which is decorated with several different symbols, each depicting a particular wish. While the young people are received in the houses, a choir of men intones the melodious notes of Hoch sollst du leben.
The name of this melody is a clear evidence of the influence of the neighbouring Austrian community;
• Scip Sciap – On December 28, small groups of pre-adolescent children roam the streets of their village in order to wish the community joy and health. The rite consists in “beating” an adult with a small spruce branch while intoning an auspicious rhyme, which is usually pronounced in the local language variants (German and Slovenian).
Also in this case, the influence of neighbouring foreign communities is evident;
• Pechtra Baba – The Pechtra Baba is an evil spirit, much feared in the past for the negative influence it could have on the agricultural production. During the evening of January 5 (epiphany’s eve), groups of children ward off the negativity of this nefarious being by producing deafening noises with pot lids and bells; this is aimed at trying to bring the Pechtra Baba out of the borders of the village;
• I Tre Re – This epiphanic rite sees children as protagonists, who wander — from house to house — singing the good news and receiving an offer. Upon leaving the house, a member of the procession writes — on the door jamb — the first two digits of the year, the letters KMB (or GMB)1, interspersed with crosses, and the last two digits of the year (e.g. 20 K + M + B 20, or 20 G + M + B 20). This sign is attributed the power to keep all kinds of negativity away from the visited houses;
• La Maja (or Maibaum) – The Maja, or Maibaum (May tree), is a fir tree that is dragged from the wood to the village, where it is limed and debarked for most of its length. Later, it is decorated and hoisted in the centre of the village. The raising of the tree symbolizes the renewal of the community, but it is also the symbol of the vigour of nature’s productivity;
• Easter rites – The Easter rites begin on Palm Sunday with the blessing of the Prajtl (or Palmbusch), namely a small tree made up of various plant essences. By virtue of the blessing received, the Prajtl acquires a protective power towards men, things and livestock. The period between Thursday and Holy Saturday (day dedicated to the blessing of the basket containing Easter foods) is characterized by the croaking sounds of tree frogs, actioned by the children of the village.

In some churches of the Valcanale, spectacular Holy Sepulchres are set up, which are usually supervised by the Volunteer Firefighters.

In the Valcanale, the maintenance of popular traditions is considered a priority that strengthens the sense of community of the various families.

Valbruna, the Valcanale and their mountains are inhabited by several wild animals, such as deer, chamois, ibexes, squirrels, foxes, lynxes, bears and many others. Furthermore, wolves have recently reappeared (it is interesting to note that the German name of Valbruna, namely Wolfsbach, means “stream of wolves”).
Encounters with some of these animal species (deer, squirrels and foxes) are commonplace, even near roads and villages. Nevertheless, to be able to admire chamois, but above all ibexes, you have to hike to higher mountains, where the enchantment of nature is accompanied by that of wildlife. The Valcanale has many naturalistic curiosities, some of which are listed below [2]:
• the small village of Bagni di Lusnizza is characterized by the presence of sources of sulphurous water, the potential therapeutic use of which has been highlighted by recent scientific studies;
• the edelweiss (leontopodium alpinum) is the symbolic flower of the Alps, even if its origins and centre of greatest diffusion are found in Central Asia and in the Himalayas. Edelweiss also blooms – from July to September – on some slopes of the Julian Alps. It is a protected species, the collection of which is prohibited;
• the resonance spruce is a conifer known all over the world by great luthiers, as the elasticity and resistance properties of its wood make it the most suitable for the construction of some stringed musical instruments (violins, violas and cellos). The Valcanale, thanks to its particular climatic conditions, is one of the rare Italian and European areas offering the ideal living environment for this species.

1 The three letters identify the name of the Three Kings (Tre Re): K stands for Kaspar (in German), G stands for Gašpar (in Slovenian), and M and B stand respectively for Melchior and Baldassarre (or also for Christus mansionem benedicat, i.e. Christ bless this house).

Those listed above are just some of the numerous naturalistic curiosities belonging to the place where I live. This list could be easily extended if only me and my fellow villagers realized that what we consider normal, as daily and luckily lived, it is actually something exclusive for the most. 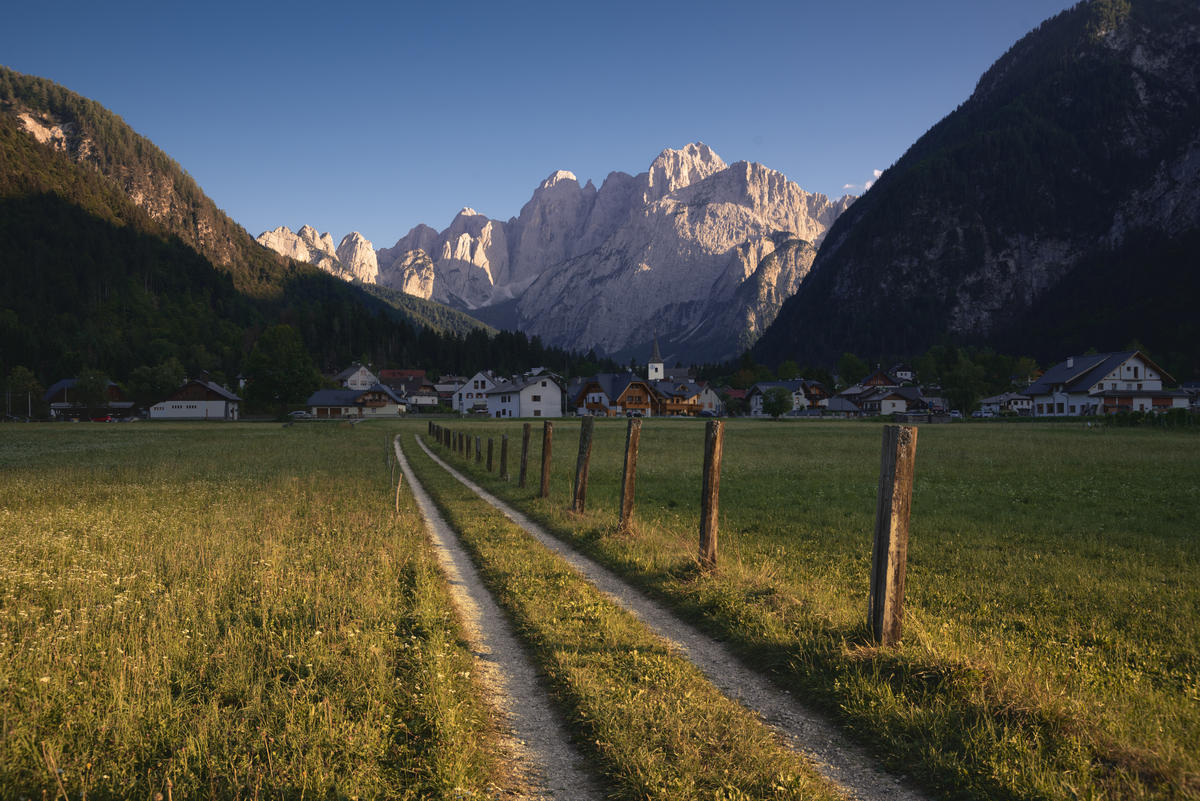 Living in Valbruna: Strengths and Weaknesses

After having briefly presented Valbruna and the Valcanale, well aware that there would be an infinity of other topics to be discussed (e.g. history, nature, culture, tourist attractions, etc.), I will tell you about my experience in this mountain wonderland. I will present both the strengths and weaknesses related to my personal experience in this location, and I will try to convey to you what the mountain means to me.

I grew up in Valbruna, where I spent my daily life until the age of 19. At this age I moved to Trieste to undertake university studies, leaving the mountains for the first time, but coming back home very often. After having achieved both a bachelor’s and a master’s degree in physics, the work opportunity I had is taking me away from the mountains again.

From the lines above it is possible to guess the beauty of my native mountains, but also the challenges that you may have to face. In fact, a small mountain village like Valbruna, which experiences severe winter conditions, offers almost nil opportunities to ambitious young people, who are forced to migrate in order to pursue their dreams. Despite this, the immeasurable beauty of its mountains — together with the sense of peace, tranquillity and freedom cradling the inhabitants of the Valcanale — exerts a gentle appeal to one’s native and natural place. A pull, attractive force that could be confused with gravity, if only the mountains were immensely more massive.

Although in Valbruna and its surroundings the facilities are limited (just think that the nearest hospital is several kilometres away), the connections with other Italian regions and neighbouring foreign states are numerous and easily accessible. This is of fundamental importance, both cultural and economical, for border locations like the one where I grew up.

The multicultural atmosphere of peace and tranquillity that reigns in Valbruna and the Valcanale is vital: I could not live without it.

Mountains as Teachers of Life

Mountains are not only majestic material objects, since these can be viewed as teachers of life. The sense of inferiority you may feel while finding yourself at the foot of an imperious mountain is something ineffable. Living the mountains means learning to respect nature. A deep feeling of respect for nature in its entirety.
All this contributed to my decision to devote myself to the study of the environment, a precious treasure that needs to be preserved and investigated further, in harmony with it.

Digital Nomads Magazine features 23 Nationalities
impactmania student internship — The Role of Social Media in Migration
COVID turned many of us into Digital Nomads
Dr. Rinaldo Comino: Sustainable Economy is the Future of Work