Today, there are approximately 258 million people living in a country other than their country of birth. The World Migration Report projects the world to experience 405 million international migrants by 2050.

Migrant workers in Hong Kong make up 5% of a population of 7.4 million. Last year (2017), the 370,000 migrant domestic workers represented 10% of the total work force of which 48 percent were from the Philippines, 49.4 percent from Indonesia, and 1.3 percent from Thailand. About 98.5% of them are women who often must leave their own families and children behind to take care of their employers’ families. These family and household caretakers are required by law to live in their employer’s residences.

Professor Fong, you have been working on an extensive qualitative study on migrant domestic workers in Hong Kong. What are the main focuses of your research?

What are some of the research’s initial findings?

The migrant domestic workers’ mental health is not as good as the local population. We are trying to understand the reasons and how to address the issues.

Interestingly, a lot of the workers don’t seek help from the government, social services, and don’t look for NGOs (non-governmental organization). Instead, a lot of them seek help from their churches and mosques. This is a quite important finding because in Hong Kong, we may have always emphasized on creating better services through NGOs. 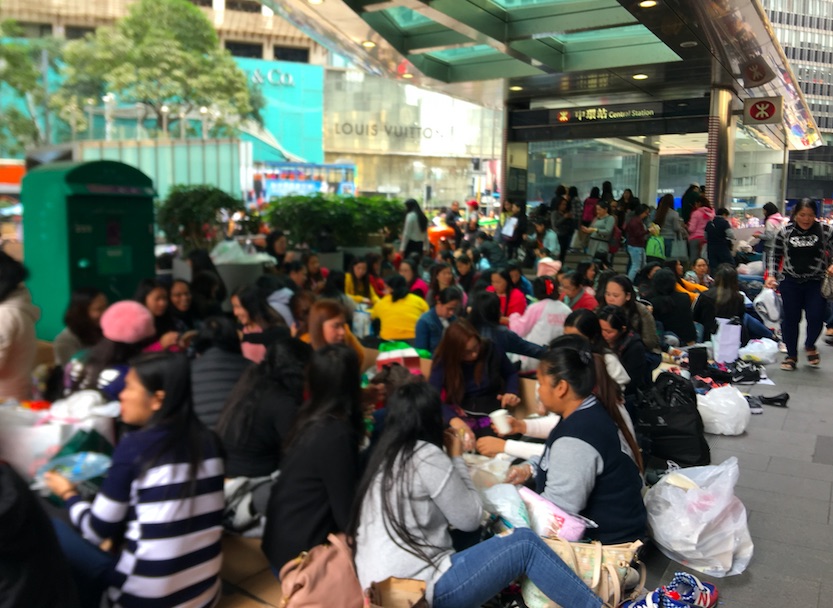 The Hong Kong government closed the roads at Central to give the Filipino domestic workers a place to meet. Photo: impactmania.

On Sunday, I walked through Central and saw hundreds of Filipino domestic workers camped out on the streets. What do Hong Kong people think of this?

Yes, the Chinese Hong Kong government has blocked certain roads specifically for migrant workers, because there’s no other space for them to mingle. People from Hong Kong are quite used to it, because this has happened for a number of years now. I think most people even think that they should have a better place to enjoy their one-day a week off from work.

A lot of Filipinos meet at Central because the Catholic Church is there. The Indonesian mingle around Causeway Bay area because the Consulate is very close by. Based on our data, a large number of them have been in Hong Kong for 10 years or more.

Interestingly, the domestic workers I spoke with all said they are in Hong Kong temporarily. Then, if you ask them how long they have been here, no one I spoke with was here for less than 4-5 years.

It’s a very interesting arrangement. A lot of migrant domestic workers stay with one family for a long period of time. When they were initially hired, they were asked to take care of the children of the family. Most of them stay ten years, spending longer time with the employer’s kids than with their own kids.

There are some studies in the United States looking at Mexican migrants. Similarly, some arrived to a new country leaving behind their own families. The migrant domestic worker in Hong Kong, often female, and her employer form close attachments, because the worker takes care of the family almost all day.

What are some of the future trends of migrant domestic workers?

From the supply side, migrant domestic workers have a high level of education, especially from the Philippines. There are agencies providing training before the migrants move abroad. Participants are educated about the culture, how to take care of things, and even how to cook local dishes.

Any idea what is happening in the Philippines with the Country’s women labor force leaving behind senior people with their young children?

It is an important question. I have not seen too many works published about this particular issue. We only know that the Filipino government is receiving a lot of remittance that’s very significant to the country. We don’t know how this affects the family relationships and the development of the villages.

What are you hoping the research will solve or uncover?

We definitely need to document the general trends about the group. If we don’t, we may not be able to provide better support to them. If we can identify the issues, then we can make better suggestions in terms of policies to the government. Or advise the group on how to better protect themselves.

Let’s talk about the migrant issue with Mainland Chinese people moving to Hong Kong after the British handover (1997). Who were these migrants moving out of China to Hong Kong?

The [940,000] people who moved from China to Hong Kong were mainly composed of family reunification. Studies suggest that most of the migrants were female who came to Hong Kong with their children to reunite with their Hong Kong husbands.

The second migrant group is highly educated; some are students who stayed in Hong Kong. The immigration process is somewhat similar to the United States. You have to return to the country of origin, unless you have a job after graduation.

The third group is the investment group. Investors are allowed to stay in Hong Kong if they bring in a certain amount of money.

One thing that attracted me to work in Hong Kong is because it is different from the United States, Canada, or even Europe. When we study immigration in North America and Europe, it always involves race. When we talk about migrants from Mainland China to Hong Kong, it’s not a different racial group.

There were still challenges though, right?

Yes, there’s a really clear group boundary between those from Hong Kong and those from Mainland. That makes the study more interesting, because you cannot find such a case in other parts of the world. We see that even with people with the same race and ethnicity, they still have to cross boundaries to meet local friends to develop social ties.

Are there similarities between East and West Berlin as part of the Germany unification?

I think that’s a good illustration. It is different in a sense that Eastern and Western Germany reunification was to become one place, one country. Hong Kong is a place with two systems. You still have to learn another system. The system, in terms of the culture and language, is very different from China’s Mainland.

You will find that the Mainland migrants are experiencing the same as migrants in North America, except they are actually from the same ethnic group. We don’t have much information in terms of how well they integrate. Especially, among the largest migrant group from China, the Chinese wives with Hong Kong husbands usually have limited social networks. Many may speak a dialect somewhat similar, but not exactly like Cantonese [language spoken in Hong Kong].

Where is that’s coming from, you mentioned that the two groups share the same race and ethnicity.

Most people have parents or grandparents that moved from China to Hong Kong during the Civil War or after the communist government took over. [After the Japanese occupation of Hong Kong in 1945, the renewal of Nationalist-Communist Civil War in China resulted in 1.5 million Chinese refugees to flee to Hong Kong].

People who moved to Hong Kong had a particular set of thinking of what Hong Kong was about and what Mainland was about. Once the door opened to China in the 80’s, Hong Kong people saw examples that reinforced their thinking. Most of the time we only pick out examples that fit with what we learned.

You say that it is a learned idea that Chinese people from Mainland and from Hong Kong are different?

It is fascinating, it’s related to cognition, the development of socialization from when we are very young.

Back to integration: what have you learned concerning the integration of different groups of people?

Countries have different policies towards the integration of immigrants. In countries such as Canada, there is an emphasis on group rights. Other governments, for example, the United States, the emphasis is on providing resources to the individual to compete and narrow the socioeconomic differences. In European countries, you see more emphasis on learning the history and culture of the host country. There is no one effective way. However, we do know that the individual socioeconomic background and ethnic community are important to the integration of immigrants. Often times, when governments see different groups have similar level of education and occupations, it is considered as the groups have been integrated.

Next week: impactmania interviews a Filipino domestic worker who has been living with and caring for her employers’ families for the last 30 years.