I have interviewed Presidents, and celebrities, CEOs, and iconic artists. I have covered historic global events such the Tiananmen Square uprising and the fall of the Berlin Wall. However, in my decades of covering people, there is one story above all that has left a lasting impression. Here is the story behind the story.

In 1996, I met the Noonan family. A close-knit Irish clan blessed with a wicked wit, but cursed with a rare disease—early onset Alzheimer’s.

At the time, not much was known about this mysterious disease, which robs people of their memories. After years of rapid decline, those afflicted died as young as in their forties or fifties. Someone unlucky enough to carry the gene passed down from one of their parents has a high likelihood of contracting the disease and possibly passing it to the next generation.

In the Noonan family of ten brothers and sisters, five would likely have the disease and five would be lucky enough to escape—a hideous twist of fate. Those who are spared still aren’t saved from the cruel sadness of having to watch as the others fade and pass away.

What led me to the Noonan family and tell their story? An unexplained neurological disease had touched my own family’s life. I relentlessly read about the latest news on the brain. I was haunted by a story I had come across about scientists who had just discovered a gene responsible for early onset Alzheimer’s. It was a big science story, but I wanted to tell the story in a personal way, about the people who were affected by the disease and by such a monumental genetic discovery. How to find a family to tell the story? No scientist would reveal the identity of subjects, even if they knew who they were. I researched and read all the background material I could get my hands on. The phenomenal team of in-house librarians then employed by ABC News was instrumental. Old school shoe leather led me from one person to another and another.

Finally one source agreed to take a message to the Noonans. Would they be interested in telling their story on ABC’s 20/20 to a national television audience?

The family had agreed to meet me in person with no promise or guarantee that they would go public.

In the age of oversharing on Facebook and Twitter, it is almost quaint to recall the Noonans’ reticence. They were right to be cautious. The story had all kinds of implications and ramifications. How would their employers and health insurers react. Would they lose their jobs and the crucial health insurance that came with those jobs? It was a time when a pre-existing condition like a genetic predisposition for a disease could prompt the revocation of precious health care coverage.

None too hopeful, I drove to Cape Cod, where the family had gathered to hear from me. With no GPS for a guide, I arrived late at night, alone, in a terrible foggy storm. When I met the brothers and sisters, they were polite, but wary and anxious. They had already witnessed the untimely death of their young mother and the mother’s twin sister from early onset Alzheimer’s. With the news of the genetic discovery, they faced a cruel equation—half of them would get the disease that claimed their mother and aunt and yet at the time no one knew who would succumb. The other important question was: what would it mean for their children and grandchildren?

They were in the midst of grappling with unfathomable turmoil. By telling their story they would re-experience their painful past as they struggled to come to grips with an uncertain future. Time was running out. One sister was already showing signs of forgetting.

Even as I made my case, spoke about the ethics of journalism I lived by—the twin pillars of fairness and accuracy—I counseled them to do only what was best for them. After hours of answering their detailed questions and concerns, they asked me to leave the room for a family vote. They insisted the vote had to be unanimous. I waited and heard loud but indecipherable words from down the hall.

Finally, Julie, the family spokesperson, summoned me back in. They agreed to tell their story. What persuaded them to talk, they said, were my effort to meet them, my honesty, and answers to their questions. While we all understood the risk for them, the family believed that telling the public would help others who lived in the shadows of the disease—alone in secrecy and shame.

The Noonans personify courage—they opened their hearts and let me and millions of viewers into their homes and lives. Their interviews were emotional poetry spoken from the depths of their Irish souls, it contained the beauty and cruelty of life. As we videotaped, my camera crew and I could barely contain our tears. The Noonans generously offered first-hand knowledge and insight about the heartbreak of the disease while dispensing priceless wisdom about how to live an indelible life in spite of it. I will always be grateful to them for sharing their heroic saga. 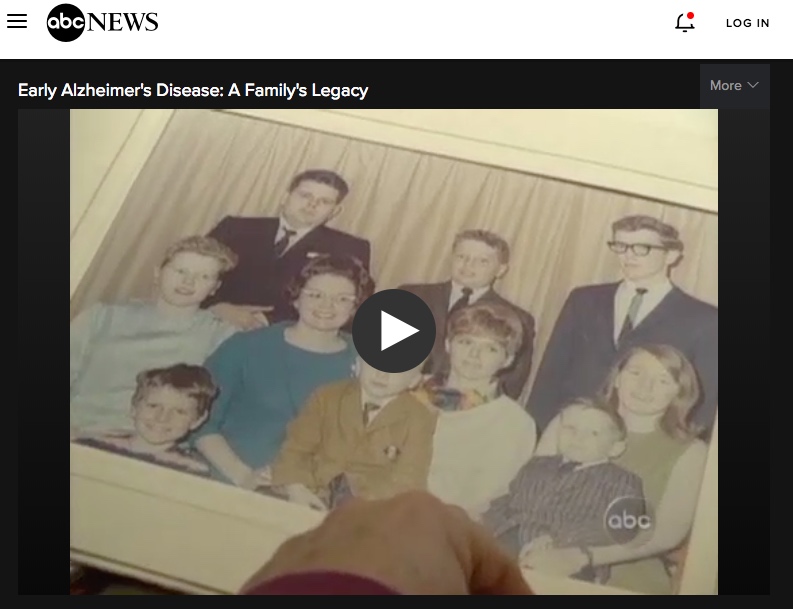 Journalism in Support of Other Families

Since airing their story, there is more we know about Alzheimer’s and early-onset Alzheimer’s, but not nearly enough. There is still no treatment or cure. For the Noonans, the disease has taken its terrible, inevitable toll. They have lost five family members now. In yet another cruel turn, another Noonan sister who was spared the early Alzheimer’s gene has now come down with the more common variety of the disease associated with aging.

These many years later, as I have come to know them better, I admire how they hold out hope for the future. They continue to raise awareness and research funds for Alzheimer’s. It is an example of journalism helping to build one powerful family legacy in support of many other families.

And more from impactmania: Trillion Dollars

More than 5 million Americans suffer from Alzheimer’s. Projections suggest that number could increase to 16 million by 2050. The last drug approved for managing Alzheimer’s symptoms was in 2003. With these increasing rates, and without disease-modifying treatments, Alzheimer’s care could cost Americans a trillion dollars, bankrupting our medical system. So what’s the answer?

Carla De Landri, Emmy-winning journalist, produced at ABC News for decades, and reported on the Gulf War, US political campaigns, the Tiananmen Square uprising, and the fall of the Berlin Wall. She and her team were the first to break the story about sexual assault at the US Air Force Academy and uncovered inhumane labor practices faced by women in clothing factories. Since ABC, Carla has pursued a wider portfolio as a media consultant. For impactmania, Carla is writing a monthly column on media and news.