Art and Migration — A Journey through Artistic Experiences

Art and Migration — A Journey through Artistic Experiences

Art and Migration:
A Journey through Artistic Experiences when Running Away from One’s Country

The topic I chose is art in relation to migration. I interviewed three people: Don Pierluigi Di Piazza who is a leader in a Welcoming Center near me; Tommaso Sandri who did an amazing art project in Mali and along the Balkan route; and Aida Talliente, an actress who worked with the Carovana Artistica in many refugees camps.

How can art be a bridge between different cultures?

In refugee camps and in welcoming centers art performs an amazing task of social inclusion and communication with very unconventional means.

We can even say that it’s a common language that we all speak everywhere around the world without the need to learn it. Witnessing an artistic manifestation, whichever it’s an experience with universal traits that cause different feelings in every single beating heart, wherever it is.

Three people that are familiar with the reality of migration helped me to consider this topic.

Don Pierluigi Di Piazza, whom I interviewed first, has founded in Zugliano the Centro di Accoglienza e di Promozione Culturale Ernesto Balducci, which offers, from 1989, a roof and a chance to integrate to migrants and refugees.

Don Di Piazza offered me a direct record of how the integration process works in Italy. And how this is perceived by the ones without a direct experience of it. “The topic of hospitality originates from the concept of the world people have,” he says. “It isn’t just a face to face relationship, this situation comes from an unsustainable paradigm.”

In relation to art he remembered some experiences at the Centro Balducci: one in particular was with a group of boys and girls that were helped by father Georg Sporschill after the fall of Ceausescu’s regime.

After hearing them playing music he thought: “Art expresses tragedies and grief but also hopes and profound joys. Art has an extraordinary strength and it’s also universal because it overcomes borders and walls built to keep people apart. It’s a great way of sharing.”

After his record I spoke with someone that instead of being involved directly in welcoming activities, has experiences in migration routes and in many poor countries affected by important emigration events. Tommaso Sandri is a visual artist and a social operator. His work consists of combining artistic practices and social promotion through art, not enhancing just its aesthetic and visual use.

A participant in the mural. Photo: Tommaso Sandri

At the end of 2015, Tommaso, his brother, Alessandro Sandri, and a friend of his, Paolo Tavani, members of Menti Libere, went for a three-month-long journey from Lignano, Italy to the border between Turkey and Syria, a total of more than 3000 kilometers. During his journey along the Balkan Route, they brought with him a 30-meter sheet of paper that had an extraordinary effect on both children and adults experiencing migration. They felt free to express their feelings, fears and hopes by drawing.

“In every place we could we put the sheet of paper at everybody’s disposal: every time dozens of children rushed to it. That created strong and immediate relations that were egalitarian because we didn’t use a verbal language: drawing was the way of communication. And after them also arrived their older siblings and their parents that made a situation open to dialogue possible.”

After that Tommaso continued to bring art to refugee camps, train stations, and places affected by heavy migration or war, from Lampedusa,Italy, Calais, France, Mali, to Bosnia.

“Art, being music, theater, drawing or any of its forms, is a universal language, the language that puts us more in contact with the divinity, called Allah, God, or whatever. Art, for its nature, connects everyone without discriminations”.

I also met Aida Talliente, an actress that focuses her work on teatro d’indagine, which consists of telling real experiences through plays. For her, theater has an important social function; it transmits ethic and political values. For this reason Aida is committed to listening to, collecting and telling the stories that people tell her during interviews.

During the years she chose to work, in addition to theaters, also in particular situations, many of them very problematic, like refugee camps in Greece, Giordania, and Bosnia, collaborating with the Carovana Artistica. The goal of this association is to bring back joy and beauty by art in places where people are afflicted by troubled backgrounds.

“Some people said to me that art, books, music, playing and smiling aren’t useful in situations like refugee camps. But I answered that yes, they are useful. They’re useful because every human being deserves care, attention, and to experience beauty even where beauty seems nonexistent” 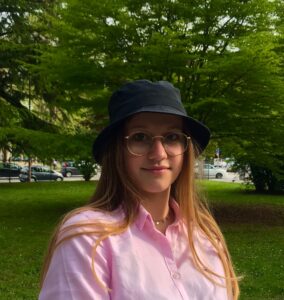 Caterina Glerean (17) was born in Udine, Italy. She attends the classical high school Liceo Jacopo Stellini, a school focused on humanistic studies. Caterina is part of the youth editorial staff of the local newspaper Messaggero Veneto Scuola and part of the impactmania student internship program. She is interested in art, literature, and music. From the past few years she has been an active member of the local group of Fridays for Future and of the Rete degli Studenti Medi, an Italian high-school students’ union.