Chris Schembra, Broadway producer, member of the Philanthropic Board of Trustees, Easterseals Foundation, and founder of the 747 Club speaks to impactmania about keeping your day job, realizing your passions while being philanthropic, and about how finding yourself can happen in your own kitchen.

Pasta sauce and human connection save my life. As we sit in this table, I’ll start off by saying that I’m a 29-year-old man, devoid of insecurity and filled with joy, which is not how life has always been.

My greatest insecurity growing up was feeling like I didn’t belong, feeling like I was always the last person called to every party, partly because I knew so many people. I was always leaning outwardly to impress them. What I realized over time was that the opposite of addiction is not sobriety, it’s human connection.

I’d just come back from Italy, producing a Broadway show. I was sitting home alone in my kitchen, and I invented a simple marinara sauce. I figured that the first thing I should do was to see if it was good or not. So, on July 15th, 2015, I put 15 people around my dinner table and fed them my sauce.

Not only did they like the sauce, but they liked meeting each other and I fell in love with the joy of connecting people, so we did the dinner the next week: same food, same model, same jokes, same everything.

We’ve had 63 dinners and have fed over a thousand people. This has turned my life and has allowed me to overcome my insecurity by building community while providing for people and connecting with others on my terms.

What can people do who cannot attend those dinners?

I’d like to empower people through our story: if they desire connection, feel alone, feel insecure, and want to be part of something greater than themselves, then they can do those things on their own.

Give me an example.

Host dinner parties and gatherings. Create safe spaces for people to come and to be authentic, vulnerable, real, and connected. The inspirational story of what we do should inspire others to go do it themselves. 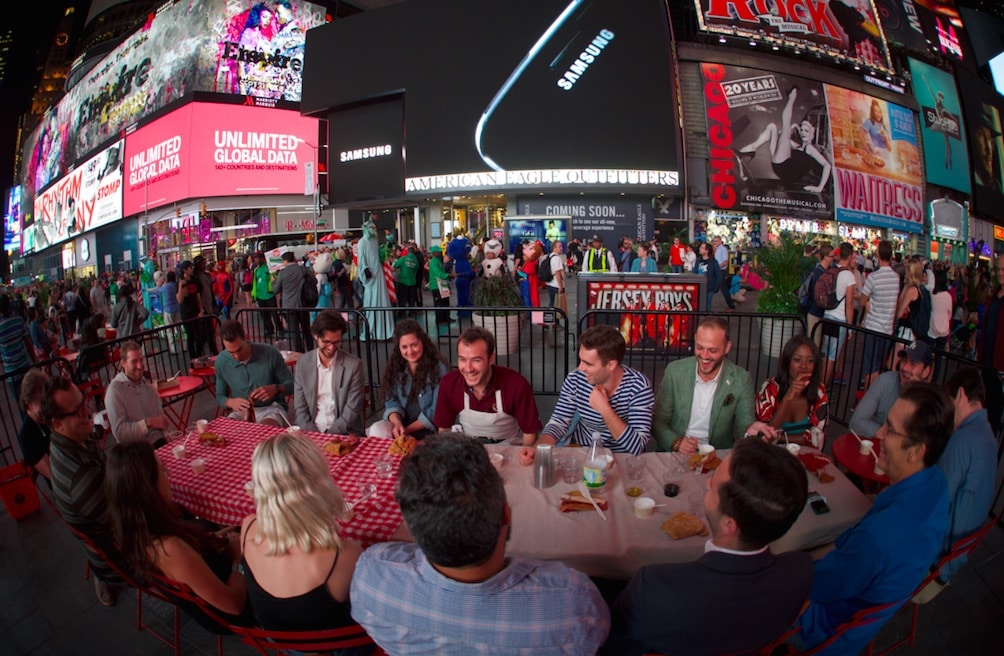 A lot of people hold dinner parties. What makes this dinner party different from the average party where the ego takes over — the ‘what can you do for me’ conversation.

The 747 Club values inclusivity over exclusivity, passion over position, and eco over ego.

The story actually starts in 1976, 11 years before I was born. My dad moved down to Hilton Head to do real estate. In 1978, he met my mom. They got married, went on their honeymoon to Europe where they talked about family, passion, philanthropy, values, everything that they cared about in life.

When he got back to America, he realized that just doing real estate isn’t going to cut it. He’s meant to do something more with his life that he’s actually passionate about, so he went in to see his sales manager, Bill Burns, and said, “Bill, I quit.” Bill said, “You can’t quit, you’re too valuable here. We need you. Plus, what are you gonna do for money?” My father said, “Yeah, yeah. I think you’re right about that, so here’s what we’ll do. I’m gonna work less. I’ll produce more and you’ll pay me more. I have something I wanna build on the side with my honey bunny.”

So from 8:30 to 10:30 AM every day, two hours a day, he did real estate. Productivity increased, he made more money, and he worked less. It freed him up to go home with mom to write down all the cool stuff he had ever learned in life, including inspiration, education, motivation, passion, and philanthropy.

Out of that, he became a motivational day planner that helped people achieve excellence and gain a competitive edge. Out of that, the company, The Hilton Head Island Performance Group, popped up.

At the same time that this was going on, on August 2, 1979, Thurman Munson, the Yankees great captain and catcher, passed away in a plane crash tragically. My dad and a couple of Thurman’s buddies got together and started a charity dinner in his honor, which has been running for 36 years ever since. It’s raised millions of dollars for charity.  Everybody he met in philanthropy and the impact he had impassioned fed into real estate.

So if you look at my family’s life, driven by income, passion, and philanthropy, what he, and what I, advocate for, is that you don’t have to give up your job to pursue your passion. You can have your job, take care of your family, put bread on the table, do what you want, and develop a passion on the side, your hustle and community. That’s the 747 Club in my life, my passion project.

When we investigate, what does it mean, the 747 Club? Not a club, I hate social clubs. One day I studied every social club there is. What I realized was they were spending so much time trying to sell their membership model and their access to their network that they were forgetting about the experience they actually provided.

I looked at my dinners and said, “Well, in 63 dinners we haven’t changed the menu, changed the time, changed the content.” We have an experience that we provide that we’re the best at, now we just scale that.

When I was five, I was diagnosed with ADHD. I was put on a heavy dose of amphetamines for 15 years of my life, until I was 20. I don’t remember dreaming as a kid. I had a narrow vision, stunted psychological growth. When I kicked the amphetamines cold turkey in the woods of Utah at the age of 20, my brain started reworking itself. Now I train harder and smarter and faster than ever before, making up for lost time.

I should not have been put on amphetamines at the age of five. There should have been creative alternatives for treatment. Easterseals has been around since 1919. We serve over 2 million people a year: adults, children, military veterans, their families and caregivers, who are living with mental and physical disabilities.

The number one program at Easterseals is called Make the First Five Count. We take care of those diagnosed with ADHD and on the autism spectrum with adequate treatment, prevention, and programs. I took the hard road.

My dedication at Easterseals is to make sure that these kids from one to five have the best access to treatment, prevention, and identification of a disability so that the rest of their lives are adequately prepared and planned for.

Tell me about your work as a producer.

I have been a theater producer for a long time.

I’m the producing partner at O’Henry Productions. My partners are Oliver Roth and Richard Roth. Collectively we use our different strengths and resources to raise money for commercial Broadway productions, do marketing for off-Broadway productions, and incubate playwriting contests in conjunction with the DVRF foundation.

We just had a play that we invested in and started previews on Broadway called The Front Page with John Slattery, John Goodman, Nathan Lane, Robert Morse, and Jefferson Mays. We also have a play opening in March called Hello Dolly with Bette Midler.

Even though I told the stories of my father, I would name Tony Lo Bianco. I ran his production company for four years. He’s a very successful and famous actor and he has the most powerful friends in the world. In his friend group, he’s the authentic guy.

We used to have an 80-person Christmas party every year where whether they were billionaires, politicians, leaders, or executives, they would come to his home and eat a home cooked meal. He is the glue of the community. I learned that from him.

…I used to be afraid of peeing in public, so one day, he made me pee in the office with the door open until I got comfortable peeing around him. Now I can pee in public. It may seem small, but that’s a massive thing. He taught me to not look at life like it’s going to be filled with rose-colored glasses. Expect life to suck, but get through it; that’s it.

Life will fail you; people will continually fail you on a massive macro scale. You have to learn to be strong and get through that. Don’t get rid of what you need to sustain yourself, but yes, you can pursue your passion. Know that a ‘no’ or a failure is not that, it’s an iteration. You change it and go; that’s it. He taught me to be bold, daring, to not care, and boom, just get through it.

That’s what I want to teach kids: go find your people, do your thing, live how you wanna live, but do it so that it has a positive impact on people.