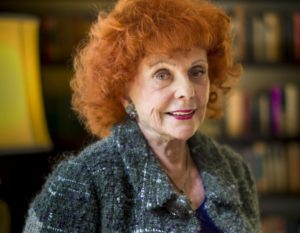 Lady Leslie Ridley-Tree was the director of a community center on New York City’s West Side and established the first Head Start program (a federal program that promotes school readiness of children up to age 5). She also established the Bridge Academy for teens expelled from public school.

Today, Lady Ridley-Tree is the Chief Executive Officer and Chair of Pacific Air Industries, a leading source for airframe parts and components and a trustee of the Ridley-Tree Foundation. The Foundation benefits outstanding students facing physical or financial barriers to education.

In addition to your local volunteering and philanthropy, you actively manage Pacific Air Industries as the CEO. Do your private sector and nonprofit sector involvements cross paths?

Not too much, however, I work so that I can give the money away. At Pacific Air Industries, many of my employees are involved in their own volunteer work as well, such as coaching their children’s baseball teams. Whenever there’s an opportunity, I contribute to whatever they’re doing.

You have been the director of a community center, and started the first Head Start program. Tell me a little bit about that.

That was very exciting. It was at a time of the cotton curtain (a political, social, and cultural divide, especially concerning race, between the southern United States and the rest of the country). [This was] a very important time [in New York City] when people were coming out of the South and the Puerto Rican and the black community were trying to mesh. It was a very difficult time. There were no places for young people to go. I was director of a church facility on the West Side of New York City, when the slumlords were there.

It was a time when there was an opportunity to make a great deal of difference. Every day was memorable because it was a chance to be a part of the community: working with the courts, helping the kids off the streets, and dealing with pregnancies. There were drugs, there were no facilities, there was no money, there were people who were hungry; it was everything at one time and how were you going to do it?

We had all kinds of terrible things happening on the West Side, West 84th street at that time. So when we made good things happen, we drew attention. We started a program, and it gained recognition. [Nelson] Rockefeller was the governor at that time, and he visited the West Side. Our programs made a difference. I had 15 children awarded to me by the court. There was no place for them to go; there were no detention places for girls. They were just left on the street. We took them in. It was a wonderful, rewarding time. Some of the girls ended up going to nursing school.

It’s like everything that has happened in my life. There was a need. And somehow, [laughs] I jumped in. My mother said, “Whatever you have, you must share. The more you have the more you must share.” When you get involved in something…for me, I can’t do anything halfway. With children, if you care at all, you care, all the way. You get inspired to make a difference. It’s there in your head all the time and you pray that you find an answer.

You did all that work and now you’re running an airline components company.

Some would say it’s very foolish because I jumped in where I’ve never been educated. The door opens and I rush through. Would I advise anyone to do that? No.

Perhaps, that’s why you’re successful? You go in and just do it.

[Laughs] I fall through.

How have your previous involvements shaped you as a CEO of a private company?

Well, I think there are many things. I did go to law school. I think life experiences and knowledge have shaped me to run the company. That I must have some intelligence to be able to do it, I must be a fast learner, because I didn’t know a thing about running the company. But I have common sense and sometimes things don’t work and you have to move on.

What is the most important thing a nonprofit can learn from the private sector?

Some of the reasons that nonprofits experience a great deal of stress are because they are not run like a business. They get romantic about them, and they build them past what they can support. They have too big of egos.

Give me an example of a gift that had an impact.

One of the students (a recipient of Lady Ridley-Tree’s scholarship), [who] is dyslexic, just received her doctorate and what she’s going to contribute to this world is wonderful. Other young people in that group [of scholarship recipients] will also make a difference in this world, and they might have been lost.

In addition, the Center for Wound Management is very precious to me. The Center offers hyperbaric oxygen therapy. When you have these terrible infections, you could be saved from losing your legs [with this therapy]. The Center saves dozens and dozens of people from losing their limbs. It’s fabulous.

Do you see the next generation being as involved in philanthropy?

Yes, I do. I see wonderful young people giving. I see that they want to serve, but they find it difficult to find their place. You will have to fall into it; it is something that you feel, and see where there’s a need. Maybe you have to find one or two things because not everything fits. You could try something. Maybe you won’t like the people that you work with or you don’t like the way they’re doing things. Or you might find that they don’t need you and you have to find something else.

What is required for social impact — to drive change in the community?

What is required for social impact? Dedication and vision.

You have said, “I don’t give, I share.” Your mother said something about being a good girl and sharing…?

She meant nickels and dimes [laughs]. Think of the miracle of how you’re made and that you’re here on Earth. For most of us, we have so much. How can we not give something back? Give something somewhere and give of ourselves; it’s not just money. I know of people who have no money and they give nothing of themselves, either. I wonder about the mentality that goes with that. Because there is such a joy [in giving] and not looking for anyone to recognize that you’re giving—that’s not what you’re supposed to do.

What’s next for you, Lady Ridley-Tree?

I’m at an interesting point in life, where all new possibilities are available. I don’t know what God has in mind for me. I’ve learned that if I decide what to do, He laughs, because He has other plans.