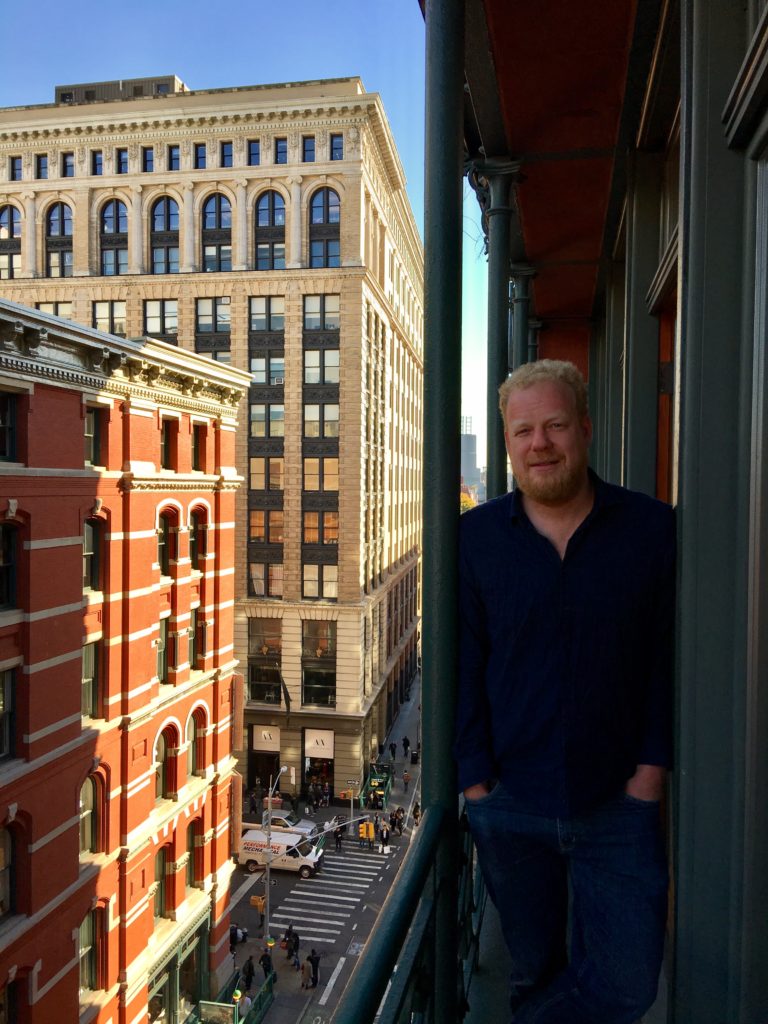 Tomáš Sedláček, economist and university lecturer, is known for the bestseller Economics of Good and Evil, published by the Oxford University Press (2011).

At age 24, Sedláček was an economic advisor to first President of the Czech Republic, Václav Havel. The Yale Economic Review mentioned Sedláček in the article “Young Guns: 5 Hot Minds in Economics”.

Sedláček also wrote the foreword to Paksy Plackis-Cheng’s book, Impact X (2015). In November (2016) Tomáš Sedláček and Paksy Plackis-Cheng caught up in Soho, New York. Sedláček provides insight to why people voted for Trump, our changing civilization, and why work will be leisure.

What do you think of Trump’s ex-wife’s desire of being the U.S. ambassador to the Czech Republic [Sedláček home country]?

What brings you to New York?

I am here for a Japanese documentary about the paradoxes of money and economy. They’ve already run a series of it, with Stiglitz [Columbia University economist and author] and other economists.

The system that we live in behaves much more like a religious and an ideological system, than an exact science. With this mathematical cover up, economists pretend it to be technical and an exact science. In fact it’s something between ideology and mathematics.

The world today looks a bit like the Catholic Church the night before the Reformation, only we don’t have Martin Luther, we don’t have John Wycliffe.

Unfortunately, you can only cease to believe something if you have something better to believe in. You can’t live in an ideological vacuum. That’s what we are experiencing today. Maybe Trump is a reflection on that, because people don’t believe the existing system. They are ready to believe anything including the likes of Trump.

What is that alternative system?

We want a system that reflects the state of being of the 21st century. We, human beings, are a curious mixture of Stone Age intuition. We still fear spiders, mice and, the dark. Although, we know perfectly well that these things can’t threaten us. Then our basic integral and religious system is that of the Middle Ages adopted with God-like technology. Which is a curious mix.

We are still stuck in a system that reflects the way we feel. The disappointment with the system is exactly what we would see in the elections.

People would vote for something more progressive, but because there was no progressive alternative, out of the revolt, they voted ‘No’. Trump happened to be the harvester of the ‘No’ sentiment.

Do you have any insights on how to fix the system? We know we want something else, but where do we even start?

The million-dollar question…we lived for centuries in a system where gathering wealth and being aggressive to your surroundings was the optimum strategy. Now it’s beyond clear that this strategy is no longer viable.

For example, we are coordinated as a planet when it comes to information. The Internet is globalized. There is no government, it doesn’t really matter that you are from America and I’m from India. It functions without any coordination.

What everybody is looking for is a system, which is aligned with our moral feelings. Your book [Tomáš Sedláček wrote the foreword to Paksy Plackis-Cheng’s Impact X] shows exactly the cases where people do things that are in line with our moral sentiments.

But these are exceptions, something the system allows and produces, but it’s not based on. The whole thing is based on greed, profit, and it’s based on using your situation against somebody. We are looking for a system, which would ideally, automatically, line up profit making with goodness making.

Are you pretty hopeful that goodness making will be part standard business practices?

Yes, these things do change and the situation is definitely much better than it was 20 years ago. It was an ignorant position and the only thing that the economy saw was the profit.

The moment companies start to understand that the field is not there for you to exploit but for you to care for it…the moment you realize that you are harvesting beer culture; you want consumers to drink a moderate amount of beer because you want to make it sustainable.

Even in China they realize that you can’t mess up your environment. Much faster than we did, they say, “We can’t just produce maximum amount of iron, we need to realize that this is our common culture, which we need to nurture.”

What would be a model economy for the future look like with the rise of innovation and automation? Forbes figured that by 2020, 50 percent of the American workforce will be free agents.

In broad brush, what do you think our future is gonna look like in terms of work and free time?

That’s a really nice question. Two weeks ago, together with other colleagues, I published a book, titled 2036. It’s exactly answering how we’ll work.

So we need to get the book!

Yeah, unfortunately it’s in Czech [laughs] but this is exactly the question we’re trying to tackle. First, we don’t work anymore.

We get paid but most of the work is not hard labor. It’s not dangerous and not physically exploiting you. You are not working for a purpose that you know nothing of, and being ripped from your family and social circles as it was 100 years ago. The difference we will see in the coming 20 or 30 years is exponential.

Second, work and leisure have swapped. If somebody from medieval times would wake up today and see how we work. He or she will come to the conclusion that work is leisure.

A lot of us are sitting in warm offices, drinking coffee, and talking with people or sending information. That share of the economy is becoming larger and larger. That time traveler would have to conclude that eight hours a day we’re prancing around. Then when we get home, that’s when it would most likely appear that we’re working, jogging, and cooking.

In 20 or 30 years, work and leisure will be indistinguishable from one another. My test of happiness in work is, “If you had enough financial resources, what would you be doing?”

If the answer is: I would be doing what I’m paid to do now, then that person is already working in a field that is indistinguishable from leisure.

Would basic income be one of the answers to this debate?

I have discussions with a Swiss friend of mine who’s researching basic income. It should be global. It should be an income that a Chinese, Indian, Russian child should be getting alongside a European or American child. Then, it would begin to make sense to me.

It would completely change the flow of investment. Currently, there is demand in Russia, China, and Africa, but that demand is unsupported by money. The economy does not need only production, it needs demand; this would work well for us. It should be something that we should think about, definitely.

With less work, what will we be doing in the future?

Substitution of human labor by artificial intelligence, machines, and robots is going to happen. Classical human labor will be obsolete. As we started this interview, there must be a new debate.

What will we be doing? One option would be the profits from machine labor could be considered as a property of mankind, not one particular person. That could be the source of a social net.

Which then, will sustain mankind as such. Hopefully, we will no longer care where a child was born and the color of his/her skin.

I would say the majority of the people would feel that it should not matter where you were born. But then we have Brexit and elect Trump.

Yes, exactly. That is what’s so disappointing. It is exactly these two events that look like we are going backwards.

This is the challenge, exactly. It is something that scientists have used to discuss the Fermi Paradox. The transition from planetary type zero to planetary type one is a huge civilizational filter. We either we’ll be able to talk with each other, or we’ll blow each other up.

I thought the European Union was a beginning of the planet’s integration. At least the European countries were learning how to speak with one another, on a volunteer- and non-violent basis.

What I thought was a beginning of a global communication, suddenly looks like it was the maximum that we could handle. America becoming more open, and suddenly, the leaders of the open world say, “No, no, no, it is too open. We wanna build walls, we wanna close doors, we know better, and we don’t want to talk with the rest.”

Who else in the world should be ready, if not Europe and the United States of America?

I thought we tried that and it was a failed system.

Yeah, we have been there, done that, and we have the T-shirt to show it. It’s not something new.

You kept the T-shirt? [Laughs.]

Yeah, yeah, and we didn’t even have time to wash it. [Laughs.]

How mental residuals from the past that make no logic at all are still functioning and driving our behavior. The whole idea of a nation states…it’s not even an old idea, but it has such gravity. It could be argued that it brought more harm than good. Yet, we are fixated on it. We can’t think in global terms.

We always ask our interviewees who has had an imprint on their professional DNA.

Did you ever meet Chuck Palahniuk?

Only a month and a half ago, I was moderating a literature event where he was one of the guests.

It may surprise you, but I do believe in the invisible hand. Not of the market, but of society. There is some self-regulatory force that doesn’t function perfectly; there are still wars and violence. At the end of the day, we’re still here, and we are regulating each other. When society becomes too corporate, a generation of hippies will be born, and nobody can plan this. It happens spontaneously. It’s invisible.

Sometimes politics is saved by art, that’s what happened in my country [Czech Republic] in 1989. Artists largely led the anti-communist movement. In other situations, it’s when politics help businesses: bank bailouts in 2009.

Traveling the world trying to put people together thinking about the way forward. It’s the task of our generation to put ethics in place.

If for nothing else, then because of artificial intelligence; we need to make clear ethical rules. Which is something that we’ve never managed as mankind.

We need to think about changing the system. If again, for nothing else, because of new technology is going to change our classical and built-in perception of society.

Let’s make sure that we pick the best from our society; strong family values from Russia and China, but not their politics, for example. We need to make sure that the best properties in a nation will be the ones that will be shining forth.

Tomáš Sedláček, economist and university lecturer, is the Chief Macroeconomic Strategist at ČSOB (a Czech national bank), a member of a group Narrative of Europe commissioned by Manuel Barroso and Council Member of World Economic Forum focused on New Economic Thinking. Sedláček is a former member of the National Economic Council of the Czech Republic and an economic advisor to former President Václav Havel. Sedláček’s bestseller book Economics of Good and Evil was published by the Oxford University Press in 2011.