Reap Benefit for the Environment: Picking Up Trash Picks Up Steam
November 7, 2016 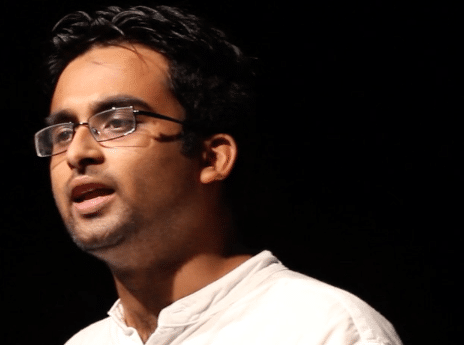 Reduce, reuse, and recycle in action. The founder of Reap Benefit, Kuldeep Dantewadia, went out on a personal daily trash collecting exercise over the course of 8 months. At the age of 21 he founded Reap Benefit, a social enterprise centered on improving the environment, and mobilized other young people to be part of the solution.

So far, Reap Benefit has worked with 240 schools saving 19 million liters of water and 1450 kilos of electricity units. Plus, the social enterprise has diverted 270 tonnes of waste from landfills.

Why Reap Benefit? It’s a combination of many things. I was born and brought up in Bangalore. It was a beautiful city when I was young. It was green and it had a charm of its own.

In very early life, my school inculcated small things, when it came to the environment. Then, I happen to be a part of a nationwide train journey called as Jagriti Yatra. Instead of being an armchair critic, it is good to get my hands dirty and actually try to solve all these problems.

What is the Jagriti Yatra journey?

It’s a train journey. After college, I was part of a [15-day] train journey where 300 young people travel across 8,000 kilometers in India. I was 21, 22. In my books that was the best start to try something. And that’s how Reap Benefit started off.

How did Reap Benefit evolved from this journey?

I collected garbage for about 7 to 8 months. Every single day, two of my friends and I would collect garbage. I began to realize that there has to be a smarter way of approaching this so that we can work on behaviors as well.

There are so many other organizations that are trying to tackle what you do — waste, energy, water  and other environmental solutions. What makes this different?

It comes out of the belief that you have to start looking at things in a more holistic manner, from an ecosystem point of view. When it comes to big issues, we all are looking for some magic silver bullet, a solution, which will solve the problem.

At the core of it all these are behavioral problems. The behavior has to be worked. Reap Benefit’s belief is that these problems can be solved in multiple ways. In the short term, we work on local data and local solutions, which are simple and are doable for people.

In the long term, we are developing a human capital of young people who have experience with problem solving. We have been building a human capital which is not passive but which is far more active. We are also building solutions by collecting data to engage the government and society in general.

You’re targeting young people to take this on. It is so logical when you think about it but I have not seen other organizations so focused on getting youngsters mobilized.

Yes, that’s the idea. What’s the most important stakeholder right now? The government, but the government is a difficult ecosystem to manage. Corporations, they have their own agenda and interest. So how can you build a cartel of people who believe that they can start solving problems and who are not passive?

To me, young people are less cynical, are far more hopeful. They will not mind trying newer things. There is this inherent need to be innovative and think out of the box.

How did the student involvement come about?

I asked myself, “Why am I doing these things? Why am I connected to these things?” Every single time I thought of that, the answer came back to childhood, so that was one point.

The second one, I began to realize that a sense of belief of problem solving was there because of my school’s service and the approach.

Who would be a good stakeholder to focus our energies on? Young people became very good building centers for us.

Kuldeep Dantewadia spoke at Launchpad 2015 about involving students in implementing solutions to environmental and civic problems in India.

It sounds like you went to a very special school or there must have been something that happened in your childhood that stood out for you?

Yeah, actually, it’s interesting you say “special school”. There were many times when I talked to some of my school friends and I’m like, “Our school was great and we did all these things in school.” And they’re like, “Is it so?” Sometimes it feels like we were not part of the same school either. [Laughs.]

I reflected on this question many times in the past…my father migrated from a very small town in Andhra Pradesh to Bangalore. He had just started his own business, so the struggle was on. I remember as a child walking in different parts of Bangalore, going to eat somewhere, or spending time in the parks. He would always say that his only aim in life was to move to Bangalore. I was very curious.

In school when we are asked these kinds of questions, we would say, “I’d like to become a pilot, scientist, computer engineer, or something.” His only aim was to move to Bangalore. As a young kid, I would ask him why, and he would say, “It’s so green here. It’s so beautiful, the city is so calm, there are so many trees, so many trees means there be so many good people around.”

That became the first foundation for me, the second foundation was a nature club in school. We had a geography teacher who made us do small, small things. For example, at the end of an academic year, we would have two to three notebooks.

She would say, “Why do we need two, three notebooks? How can you write in a way to fit one notebook?” It was a small action, but the thoughtfulness of the action made me think deeper about it. I remember her taking us to a bird watching activity with a very popular ornithologist.

The way he spoke about the ecosystem of birds, nature, and environment. It was not deep and profound, but there was an understanding that there’s an ecosystem, and this ecosystem cannot talk to us, but this ecosystem is equally important. Like switching off lights or turning off taps, so these are some very basic things.

When I moved to college, that’s where the real disturbance started because Bangalore started changing from the Bangalore I knew to the Silicon Valley of India, with reckless construction and garbage thrown all over the city. I thought, if you’ll study and be more educated, these problems will become less. But clearly that’s not the case. When you’re in college, you have a lot of these quote and quote intellectual discussions.

At one point I started asking myself, “What is the point of this discussion if it doesn’t lead to anything meaningful?”

Luckily after college, the only good decision I made, I didn’t seek a job. I happened to go on this nationwide trip and suddenly the dots started to connect and the puzzle was becoming clearer. I came back and I didn’t have an idea, I didn’t know what a social enterprise or development sector was. I just started collecting garbage that was a very accelerating speed of understanding a problem.

Why did I choose garbage? Because it was the only problem I could see at that time. If I talk about air quality, how do I make that far more relatable to people? But garbage was just out there; you can see and experience it every single day. That’s how the journey started.

You’ve started this social enterprise, what do you think in general is needed for social impact?

Many times what happens in social impact is, people start beginning to feel they’re making too many sacrifices, and yes, they are. At the end of the day, I believe it because I like doing this, and that’s the real truth, right?

Nothing is more important than that. Take your work extremely seriously, but don’t take yourself seriously. Because honestly, these are very, very wicked problems and change is slow.

In building Reap Benefit, what has been a surprising learning for you?

When I look back and it feels silly but I think managing people is the best thing ever. I kind of underestimated this ability.

Can you give me an example?

But ultimately people management is the most important thing. If you can do that right, impact starts multiplying at a faster pace.

Who has left an imprint on your professional DNA? You mentioned your father and geography teacher. I’m sure there are many others, but is there a specific someone who has impacted you as an entrepreneur and environmentalist?

One was Anshu Gupta from Goonji. I heard him speak and thought, “Here is a man who is no nonsense, pursuing a mission that is so complex.” I was blown away by his straightforwardness, by his energy to pursue his mission. [Anshu Gupta created a parallel economy based on trash.]

His non-apologetic nature of doing what he does but not being bigger than his mission. He is a very, very interesting social entrepreneur to listen, see, and to talk to.

Closer to home in Bangalore, Harish Hande. Harish Hande created this very simple solar lighting. One thing that came across is that he is staunchly in touch with what plays out on the ground. We all think we know stuff, but the stakeholder knows how to solve the problem much better than we do.

Both of them, very early in my life, gave me the importance of working in the field. I have taken that very, very seriously.

How did Ashoka discovered you?

In 2011, Ashoka had an event called Green Plan-It. They had called a lot of Ashoka fellows to give a talk. Then they were looking for a young person who’s trying to do something.

Ashoka gave me that platform. That’s when I also met my co-founder, Gautam Prakash. After a year or two, the Ashoka venture team got in touch, came, saw our work, and asked us very, very tough questions. Then they asked, “Will you want to go through the process of becoming an Ashoka fellow?”

What has becoming an Ashoka Fellow meant for Reap Benefit?

It became a great validation. Sometimes people question my commitment, because the organization and I were young. Now, it has been validated by Ashoka, people see it as, “There must be some fabric to him, which is right.”

Second, in India there are so many Ashoka fellows. Some of them are just superstars. Observing them and getting connected with them have been really great. Just to lean on the soft support from Ashoka in terms of connection, ideas, and listening. Ashoka has been very, very helpful to me.

What’s next for you, Kuldeep?

We avoided scaling for the longest time. We felt scaling compromises on the quality of what one is doing. Now, after having worked for years, we’re trying to amplify the work. We’re developing a technology platform, an application, where citizens can solve problems in the local environment with the government through data solutions and communications.

Can you give me one word that describes your journey so far?