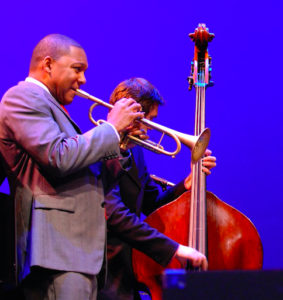 World-renowned trumpeter, composer, and managing & artistic director of Jazz at Lincoln Center, Wynton Marsalis is a nine-time Grammy award winner who also received the Pulitzer Prize for his work.  In 2001, he was appointed Messenger of Peace by the United Nations.

impactmania asked him what is needed for social impact.

A change in the symbols. We have to change the symbols of our mythology; that’s how you get broad impact. The story of the country needs to change. People need to hear modern symbols of people coming together. An example would be that when you think of the March on Washington, you think of Dr. King’s speech “I Have a Dream.”

But the truth of the March on Washington, and of all of the speeches together, is that they are much more powerful than one man’s speech. We have to change symbols. If you could just change the symbol of that one day, it would be a celebration of the nation coming together. Here is the speech Walter Reuther [labor union leader]  gave, here is the speech A. Philip Randolph [leader African-American Civil Rights Movement] gave. Because all of the generations and everybody came together, that day became much more powerful. Change the symbols.

The March on Washington for Jobs and Freedom, held August 28, 1963, is one of the largest demonstration for human rights in United States history. That year was marked with racial and social unrest and civil rights demonstrations. An estimated 250,000 people marched peacefully from the Washington Monument to the Lincoln Memorial in the nation’s capital.

The most remembered speech came from Martin Luther King, Jr. Dr. King’s “I Have a Dream“ called for an end to racism.