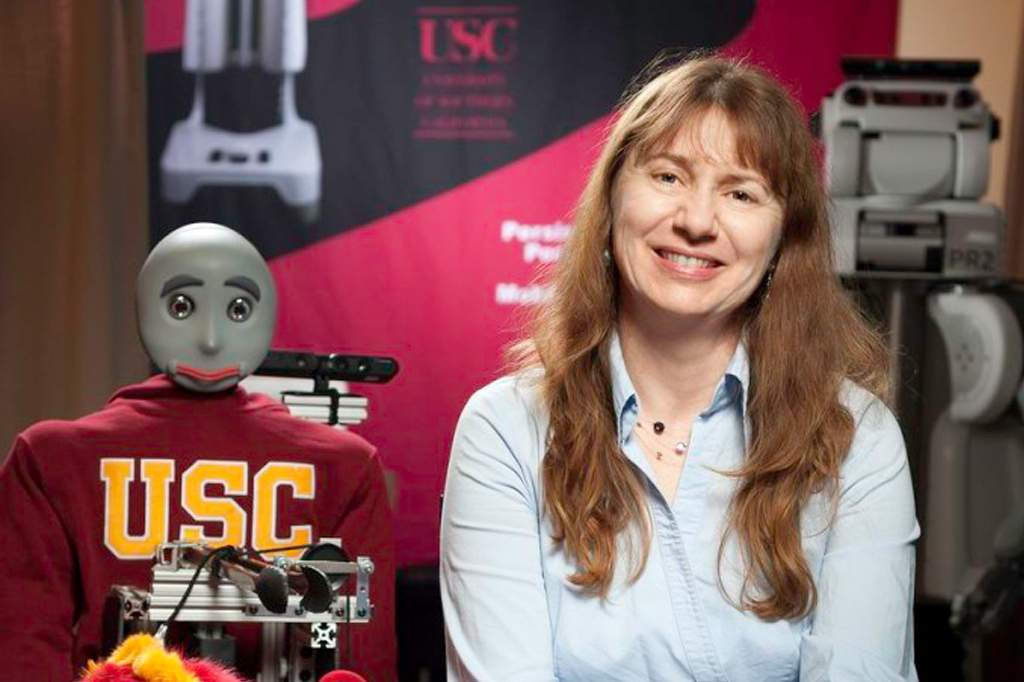 Professor Matarić is the United States Presidential Award winner for Excellence in Science, Mathematics and Engineering Mentoring in 2011. Recently, she was named one of Los Angeles up-and-coming innovators to watch for her work on socially assistive robotics to aide people in society. 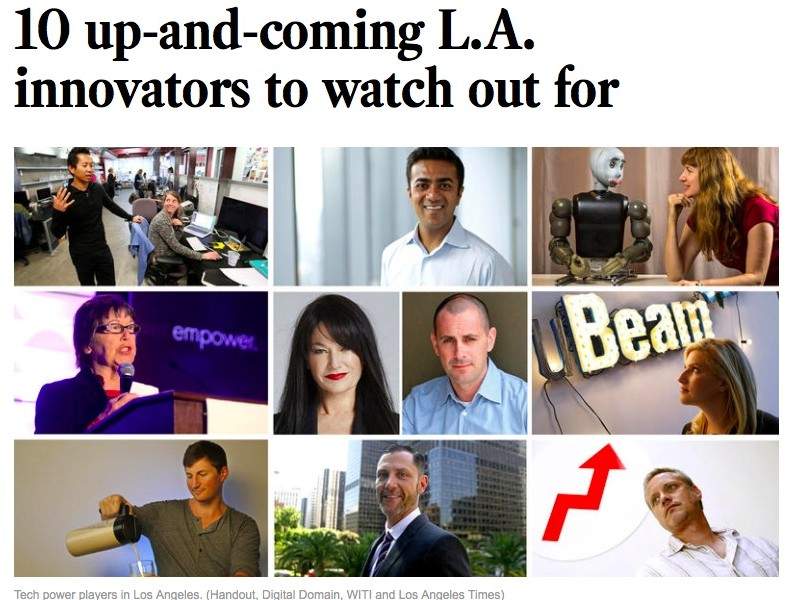 impactmania spoke with Matarić about how she uses science and technology to impact the immediate community, here and now. From K-12 outreach to other programs — Matarić is a big fixer of the “leaky pipeline” — her lab consists of all women except two first year male students.

How long before we see socially assistive robots at home?

We will see the earliest socially assisted robots in the home probably within five years, in Asia, just because the barrier to get into the consumer market is lower there. My lab is working on relatively sophisticated robots where we would like them to understand the user’s personality, predict the user’s needs, and cater their help to the individual user. In the near future, we can expect robots to interact in a focused way. They might help a child with autism to start playing and behaving socially. And it’s a very important and helpful thing.

Why is the barrier of acceptance lower in Asia?

Both Japan and Korea are leading countries for robotics. They are very concerned about not having enough care for the elderly and have always looked at technology for solutions.

The other most fundamental difference is that at the level of their governments, there’s a lot of investment in both the research in robotics and also in spinoffs and companies in this space. Comparatively and proportionally, in this country, there is less investment in both. There’s a National Robotics Initiative that President Obama announced in 2011, so that’s wonderful. I was on the team that pushed that along, but, still, it’s relatively small, in terms of investment. In order for us to see robots in homes, companies have to create these products. Venture capitalists are still very conservative about investing in robotics for home domains. They’re worried about liability — not even the robot hurting the person; what if the person trips and falls? There is a lot to be worked out in a way that isn’t as much a concern in Asia. They’re willing to jump in and see what happens.

Do you collaborate with the private sector?

We are working with a company that is developing low-cost robots for children. For years we’ve been creating robots for kids with autism. One of the issues with kids in special education is integration. Unfortunately, many typically developing children may not study or play with special education kids, and that’s just incredibly sad, especially if you look at a disorder like autism, where the kid’s IQ is distributed the same way but there’s a social disconnect. The robot creates a social bridge. Kids love robots, and if a kid with autism has his or her own robot, other kids want to play with them. I want to see these robots serving as social catalysts, not just educational catalysts. Our goal is not to create a robot that will further isolate a child, but instead connect the child with other kids.

I’ve been doing K-12 outreach for about 12 years. We started out working with about 13 schools in the neighborhood around USC, a very much in-need and at-risk population.

I have three kids, so I’m automatically motivated. I think teachers are overworked and underpaid. We should do anything we can to help. Especially with the new common core standard that requires teaching engineering in K-12, the teachers are not prepared. It’s not their fault: most of them were not educated or trained in engineering. It’s a tremendous opportunity for us, who do engineering for a living to make a difference in K-12. We can bring kids to our labs; we can go to schools; we can show teachers and kids what engineering really is. Every April, we host the USC Robotics Open House, and more than a thousand people show up; 80 percent are kids. It’s a bit of an open mad house, but it is great.

Also, with funding from the National Science Foundation (NSF), we have summer programs for teachers, where they spend two summer months in research labs on campus. After that, they are well informed and trained to teach engineering in K-12.

What made this a priority?

I thought about that a lot. Fifteen years ago, I was doing robot teams, spatial representations, and so on. Around the time that I had kids, I started to think how to answer the question: “What does mommy do?” and, soon after that, “Why?” The answer cannot be, “Just because I like it” The answer cannot be, “Because there are federal grants,” or “Because it’s interesting.” You know what? That’s not enough. It’s not enough that it’s interesting. I love it now that I can tell kids, “Mommy builds robots that really help people who need help, people who have autism, or people who have had a stroke, or somebody who has Alzheimer’s, like Grandma.” They think that’s cool, and you know what? It is cool. I learned a lot from my kids.

I have seen real human attachment to robots.

That’s what we are trying to leverage. There is longstanding evidence from psychology that if you show people something that has lifelike behavior, they will attribute lifelike properties to it. Such as emotion and intention.

I am not interested in robots that look realistically like people as that can lead into the Uncanny Valley, where people think the robots are freaky. That is because it is really hard to create truly realistic-looking human behavior. Also, hyperrealism is too expensive. You do not need realism to engage people. It is behavior that matters, and so I don’t work on appearance. There are other people who do, and that’s great. It is definitely worth studying. I want the robots to be affordable. I want it to be something people can use in my lifetime. 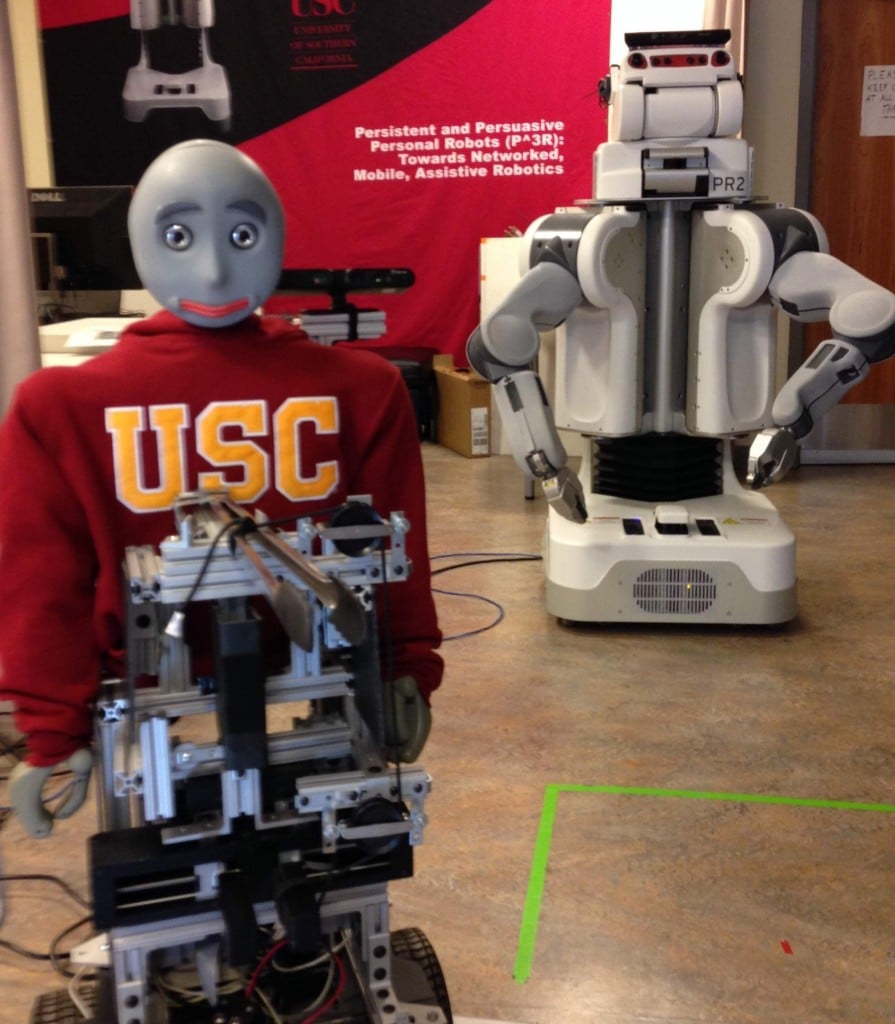 One of the really interesting things about what we do is to better understand what people really need, what makes us human. Putting people and intelligent machines together is a whole new area of engineering. It tells us a lot about us. I’m really touched when we work with patients, people in need. They are in many ways so modest, and their needs are humble; they’re not demanding. They often don’t want to put human helpers out, and so they’re sort of inhibited. With a machine, they really feel this is their buddy—it never gets tired of them. It is remarkable how effective robots can be. And that’s what gives me hope.

What can others do in their community to get more involved with science and technology?

For people who are already in involved in science and technology, it’s really important to get the word out. The vast majority of kids don’t have an idea of what science and engineering is or what it could be.

Aspects of what people do in science and technology are very accessible. Anybody can reach out to the local university and to people who know about Science, Technology, Engineering and Mathematics (STEM). I had parents who’d say, “Can my son/daughter tour your lab?” Once I had enough of those requests, I thought, “Why don’t we just have an open house?” Then a thousand people showed up, again and again and again.

Professor and Chan Soon-Shiong Chair in Computer Science, Neuroscience, and Pediatrics at the University of Southern California (USC), founding director of the USC Center for Robotics and Embedded Systems, co-director of the USC Robotics Research Lab, and Vice Dean for Research in the USC Viterbi School of Engineering.

Matarić is a Fellow of the American Association for the Advancement of Science (AAAS), Fellow of the Institute of Electrical and Electronics Engineers (IEEE), and served as the elected president of the USC faculty and the Academic Senate.

Among numerous honors and awards, most recently, Matarić received the Anita Borg Institute Women of Vision Award in Innovation in 2013 and the U.S. Presidential Award for Excellence in Science, Mathematics and Engineering Mentoring in 2011.