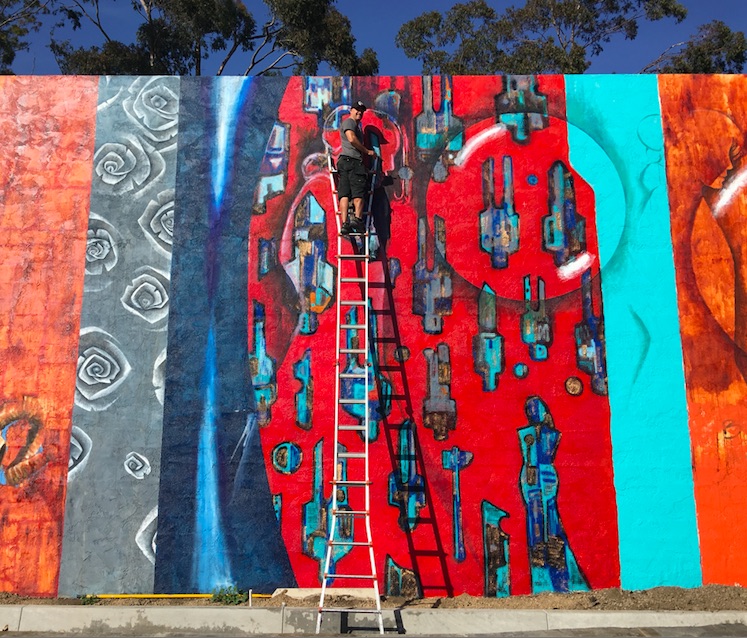 Gus Harper, artist and muralist, is in Santa Barbara to paint a mural on Haley Street. The UC Santa Barbara (UCSB) alumnus (Law and Society and Art Studio) joked that Track & Field was his real major. Gus returned recently from a three-month trip in Asia where he donated his time to several mural projects: a clubhouse in the slums of India, a train station in Sri Lanka, and a wall of a bakery in Laos.

I understand that your mom inspired you when she was in art school?

Yes, I can remember being seven years old and my mom, a student at Otis College of Art and Design would take me to drawing classes — nude figure drawing classes. The teacher said, “You can’t bring a little kid here!” My mom said, “Look, either I bring him or I don’t come. And everyone else is 20 years old, and they don’t have kids, so it’s not going to become an epidemic problem!” It exposed me to the idea that adults can be artists. I never questioned it.

You were commissioned to paint a mural on a commercial building. Could you tell me about the process?

I had to go through the City. [Laughs.] This is a tough city to do stuff in. The City of Santa Barbara Architectural Board of Review looked at a picture and said, “There are some planters that are supposed to be in the parking lot.” I replied, “I don’t know anything about planters, I’m here to ask permission to paint this wall.” They went on, “And there is supposed to be a bicycle rack. Does that not block the view of the mural?” It’s a 24-foot tall wall! They continued, “Maybe you should do a drawing that shows the bike rack in it.” [Laughs] I said, “You want me to go back to LA, delay the whole project for two weeks, so that I can draw a bike rack? Hand me your paper, I’ll draw it in for you right now.”

Your work is produced primarily outside in the environment. What kinds of questions do you get asked by people while you’re working?

People walk by and say, “Are you doing this?” What they mean is, you did all of this work? At the beginning, it was very esoteric. I was putting up weird colors, and I think some of these guys [pointing at the construction workers on the other side of the wall] were wondering…[Laughs.] Now they love it. Some people say, “Wow, it’s so beautiful, what is it?” Other people pull their faces with comments like, “What is that?” I guess it depends on your personality. You’re living with negativity or positivity.

All the color columns represent chapters in our lives. The monks accompany us on our spiritual journey. One walks in the opposite direction. A man and a woman are depicted, and they have found each other, so there is a little love story within their journey. But there is always one person going against the grain.

People come up and tell me what they see. And I don’t say whether they’re right or wrong because I want to make people wonder. I also didn’t want to spray paint a mural with colors and add in the word, “Breathe.” [Laughs.]

And no palm trees, thank heavens.

Yeah, I could just paint palm trees and everybody would be happy. Nobody would be puzzled and think, “That’s odd.” But if I make it a bit more polarizing, it’ll also be a little more loved.

This is how I feel. I fell in love with a painting when I was seven. I remember going to LACMA with my mom, and encountered the portrait of Don Bachardy and Christopher Isherwood by David Hockney. My mom said, “Look at the bowl of fruit between the two men. It rests a bit to the side and that makes the whole painting out of balance, which creates a sense of angst in the painting.” She didn’t tell me they were gay lovers because I wouldn’t have known what that meant. [Laughs.]

Years later, I posed for Don Bachardy who is a portrait artist. I started telling that story, and he’s like, “I don’t want to know anything about you before I paint you!” [Laughs.]

I remember when I was a kid and I would see this giant disregard for rules. I was too young to understand the cynicism of Pop art. I like to disregard the reckless abandon of colors. You see that a lot in my work. It has those bright colors, but it’s not about cynicism, it’s more about joy. That’s just my journey; it is where I’m at. I like to make work that appeals to a sophisticated adult, but also speaks to a seven-year-old child. 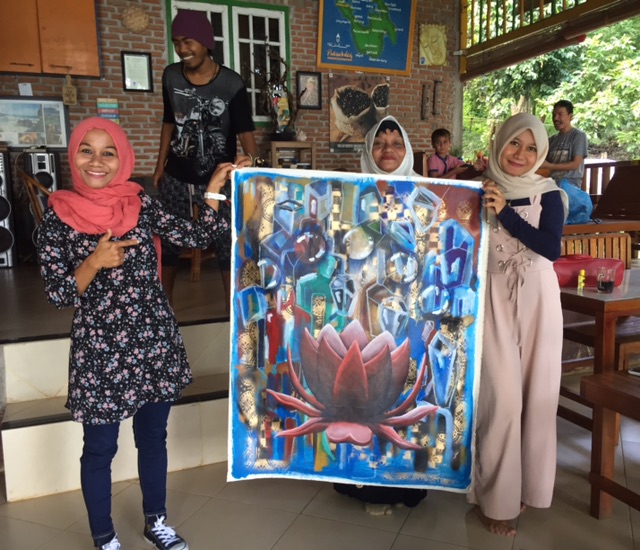 The artist traded a painting for a week of lodging and food in Indonesia. Photo by Gus Harper.

You gave up an art studio in LA and started traveling in Asia to paint murals?

I had two art studios in LA. The main art studio, where I lived, was 1,900 square feet. I also had a side studio, which was like an airplane hangar at the Santa Monica Airport.

I was in my main studio for about eight years. I gave it up for no reason other than the need to grow. I gave up my home, and left to go travel the world. The first three months, I was in the US and Mexico, and then I went to South Asia.

I just returned and started rolling this wall with solid colors — everything’s freehand.

In the past you’ve also been to Africa, and taught children about art, and art making.

I didn’t know what I was doing yet. I was with a friend who traveled the world. Everybody always asks her, “Are you the one who went to Africa with Gus?” And we would laugh because we both know that I went with her. She is the badass! [Laughs.]

We went to orphanages and refugee camps and made murals. The whole time, I thought, “People who are destitute like that, they don’t need things — they need food.” I didn’t really get it until this last trip, when I painted a clubhouse in the slums. I finally understood it for the first time…I saw that making art together, and the mural, made people happy. It brought them joy. It made a difference. 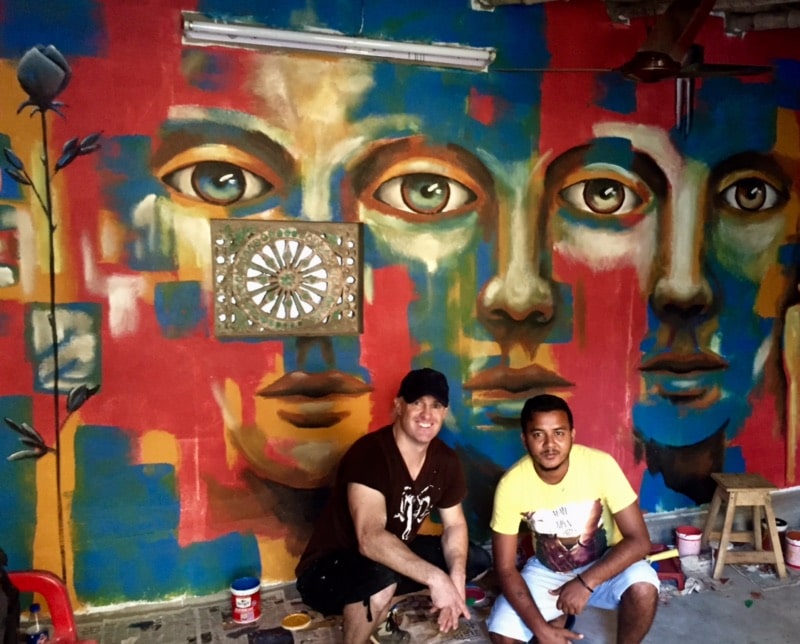 How did you end up painting a mural in the slums in India?

A tuk tuk driver in Kolkata, India drove me around. I told him that I wanted to paint a mural. He said, “What the hell is a mural?” I had to explain what a mural was and asked if he could help me get permission to paint a wall. And he replied, “Well, maybe you could paint my club!” And I was like, “You belong to a club?” And he said, “No, no, I have one!” So we went into this crazy little neighborhood, through all these alleyways. We pulled up to a few parking spaces with rubble. There was one room with an unprimed gray wall; it looked like a bomb shelter. He said, “This is where we hang out.” I carried out my gear and paintings (within poster tubes) on my back. After I showed them my paintings, twenty guys came with me to buy paint. [Laughs.]

At the end of the day, the tuk tuk driver took me back, pulled over and he looked down. I’ll never forget, he said, “I’ve never had a day like today, magical.”

In Laos, I was smart. I picked the sidewall of a bakery to paint. [Laughs.] The owners brought me cookies and then they’d take me out to a bar at night.

After I was situated in Sri Lanka, I got a bike. I biked around and found a wall at the Hikkaduwa Railway Station. When I painted there, a crowd of people stood behind me all day. People invited me to all these restaurants. I would ride my bike around and hear, “Hey Mr. Artist Man!” 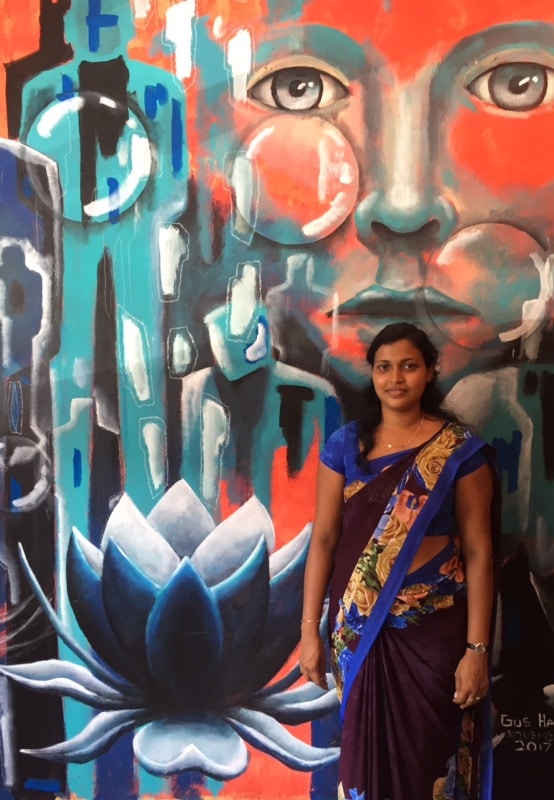 Was it easier to get permission to paint a wall in Sri Lanka or in Santa Barbara?

[Laughs.] Sri Lanka! In most of the South Asian cities, you ask the person who owns the wall, “Can I paint something here?” Often enough, they say, “Yes!” There’s no committee. Even when I ask government officials there, they will take responsibility. They are a little confused because there’s a language barrier, but then they can’t believe that I’m doing the mural for free.

What is the most important message you want to communicate with this mural in Santa Barbara?

When I see something like this, I feel stimulated, excited. It infuses a sense of joy or wonder. I collaborate with a lot of other artists. One of them was speaking with me about life. He says my stuff is so joyous. He tells me that his work is liked because he shows the darkness of life, its turmoil and struggle. I just listened. I have traveled to places where people aren’t doing well. I have seen hardship, but also the resilience of mankind. Out of turmoil come the most beautiful things. There’s sadness and tough times, but there’s also joy. This mural is about that. I love the idea of people growing up, moving on, and remembering this painting. They’ll come back in 12 years and show it to others, and say, “Here it is!”

While you were becoming an artist, do you recall something someone said who made an impact on your career?

This is from a lawyer I met years ago when I thought my backup career was law. I said to this law professor, “Aren’t there already too many lawyers?” He looked at me and said, “There’s always room for excellence.” If you do a good job there will be space for you. There are a lot of murals, there are a lot of artists, but there’s always room for excellence.