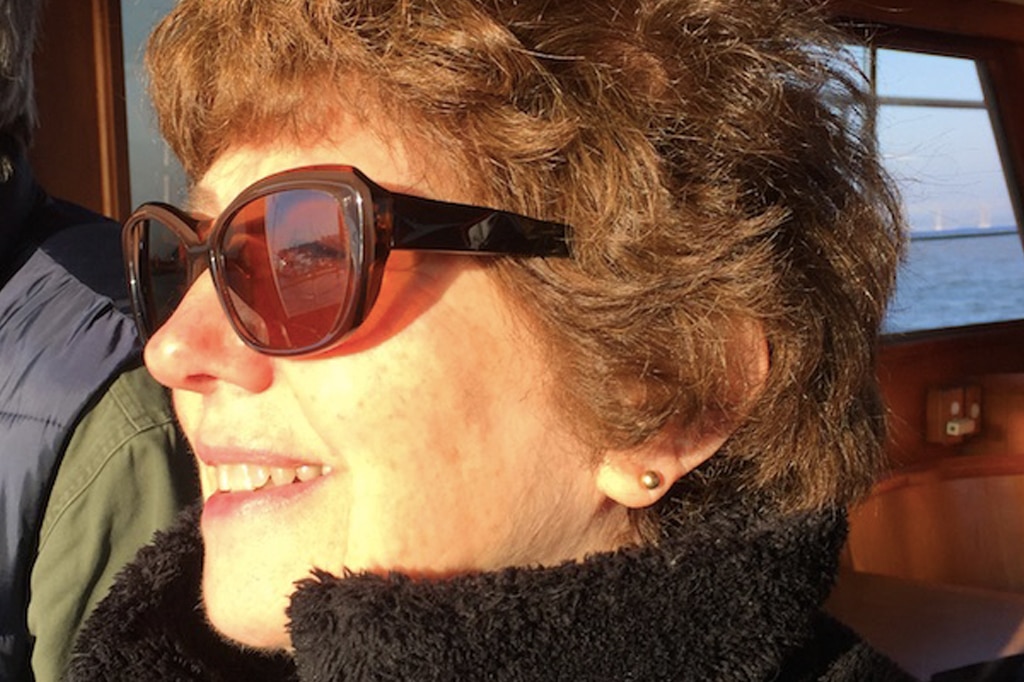 Charlotte Grossman is a film editor and producer. A show she edited won an Oscar for best documentary and she also won an Emmy for her work on the same program, “He Makes Me Feel Like Dancin’ ”.

In 2000, Grossman shot and edited a documentary, Woman’s Work: Making Quilts — Creating Art, about how women find their creative voice in the world. It was aired by KQED and taken up by American Public Television, which broadcasted it nationally in 70 markets.

Grossman says, “Even though it’s called Woman’s Work, so many men who look at this show say, I have had the same experiences. I get it.”

She was at work editing at her postproduction workshop when she recently talked to impactmania.

Storytelling, being the last rewrite on a script, suits me. Everybody on a film works on this huge collaborative project. The writer starts it off. The editor does the final rewrite, and in the middle you have lots of hard working, talented professionals. Often you’ll find that good stories are hardest to tell. Who knows if the story is going to work? Who knows if your casting is good? You do the best you can.

Most of my career, which started in New York, was cutting documentaries. Documentaries are very special because a documentary editor actually creates the story in many ways. [I’d] look at all footage. With interviews and B-roll footage, you could often have 150 hours to draw from to produce one hour or less. [I’d] start to see where the footage [was] going. In the days that I was cutting, you were given time for this. At that time, film was physical, of course. When you cut the film, you [had] to keep it in a special place — with many trim barrels, each filled with your selected shots.

I started as a gofer (go for this, go for that). I washed floors, I got people lunch, I answered the phone, and I entered bills and receipts into a little red book that my boss had. He had just started his own business. I was 22, and he was 29. He was a wonderful editor and truly a mentor, but very tough.

It must have been unusual for a woman of 24 to be an editor.

Yes, it was. I was in a small company that needed an editor, he saw that I could do the jobs that needed to be done, and he was delighted. I had 20 great years of editing film in New York. Then, when I came out to California, I had to transition into the digital world, and I discovered Avid Media Composer, a powerful editing tool. I was very lucky I was trained on AVID at Apple at the very beginning in 1991.

What are your views on the different mediums, TV, film, and Internet?

What makes a good story?

There has to be something very personal and something very universal in it. People have to be able to understand who these characters are — why they’re doing what they’re doing. You don’t have to have entire backstories on people. But when you’re directing a film, even in a documentary, you want to get an idea of who your characters are. It’s very important when you’re putting stories together: Why would this person say this? Why would they do this?

I was just listening to a documentary about Mike Nichols. He said all scenes where people are speaking to each other break down into three categories: seduction, fighting, and negotiation. I have been thinking about this for the last three weeks since I saw the doc on KQED.

So there must be tension?

Mm-hmm, that’s right, and conflict. Conflict is very, very important, but how is it expressed? You have caught me truly in a pool of thoughts about this. I am practically over my eyebrows right now because it’s very compelling to me. I’m looking at students’ work at the Academy of Arts University where I teach computer editing and theory of editing. A lot of the students are very young and many are from overseas and did not grow up with Western filmmaking. When I have the opportunity of giving them something to shoot or edit, I try to go to films that are wonderfully written with great characters — even if it’s only a three-minute scene — to show what the students can do with the language of film.

Writing, by the way, to me is the gold of the business. Writers are precious beyond rubies. If you find good writers don’t let them get away— lock them up in the basement.

What is your personal reason to tell stories?

Who among us understands the world? I asked my mother, a refugee and my father, a child of refugees who came to America early in the 1900s. Both were 20 years old at the time of the Depression. Sharing those painful, but real stories, changes the way you see how people help you or don’t help you, and this gives you fear or confidence.

You know Amy Tan’s The Joy Luck Club? That wonderful piece at the very beginning: “I came from afar, and I have these white feathers, and with these white feathers I wanted to tell you…” A mother is talking to her daughter about her life as a young girl. The families in the story lived in Chinatown, San Francisco, and were yelling at each other in Cantonese. I felt like my childhood had come back to me. It was wonderful and painful. A universal story.

I always try to hear what other people say who didn’t have the same background as I did; how those who came from people who were very new to this world or confused by it, how they struggled with and against their new world. Nobody really knows the answers, do they? Everybody wants an absolute from somewhere, I guess. Maybe I looked for it. And perhaps I found that there was no answer, just the work of struggling and building.

You make your way and try to have a good heart, be a good person; you shape the best life you can. Not new, yet the core of thousands of moving stories.

What is one of the most difficult things to teach students who study filmmaking?

The job of the editor is to “listen” to the material in the story and try to make it as believable as possible. You have to start off with the assumption that human beings actually do such actions, even when your characters are CGI (computer generated images).

Everything has to feel of a piece. The story has to have unification. If you don’t have that, people will feel it right away. They won’t like the story. They won’t understand the story. It’s very hard to show students how to use reaction shots, silences, looks exchanged by people, and how to integrate these shots into the storyline. What often happens is that students leave out very significant continuity elements. If they cut the shots it too short, they lose pace and rhythm which impedes that narrative clarity of the scene.

Often students don’t understand that what is going on in their head is not what the audience is seeing. This is something I wrestle with helping all my students grasp.

You edited ABC Sports Specials, The Lady Is a Champ — Women in Sports, produced by the first woman producer at ABC Sports, Eleanor Riger.

Ellie Riger: My goodness, she was wonderful. We were working together in an all-boys club for a long time. She defended me there at ABC Sports…

She was very interested in working with a woman editor, but she wouldn’t have taken me on if I couldn’t do the work. I was very proud and very challenged. It was a good relationship. 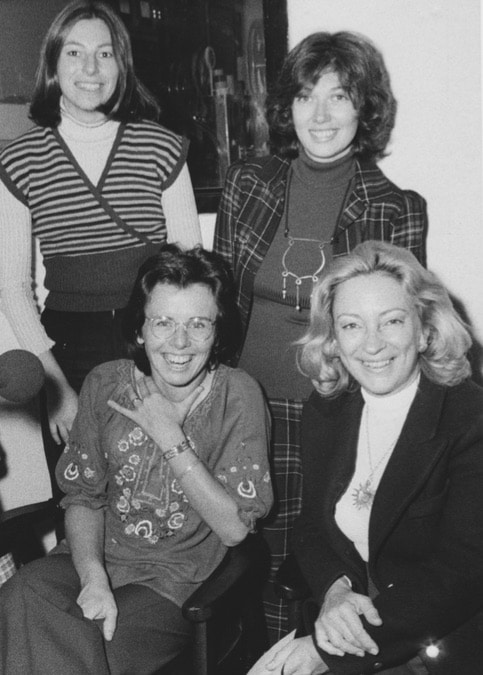 Who is one of your impact makers — someone who left an imprint on your professional DNA? 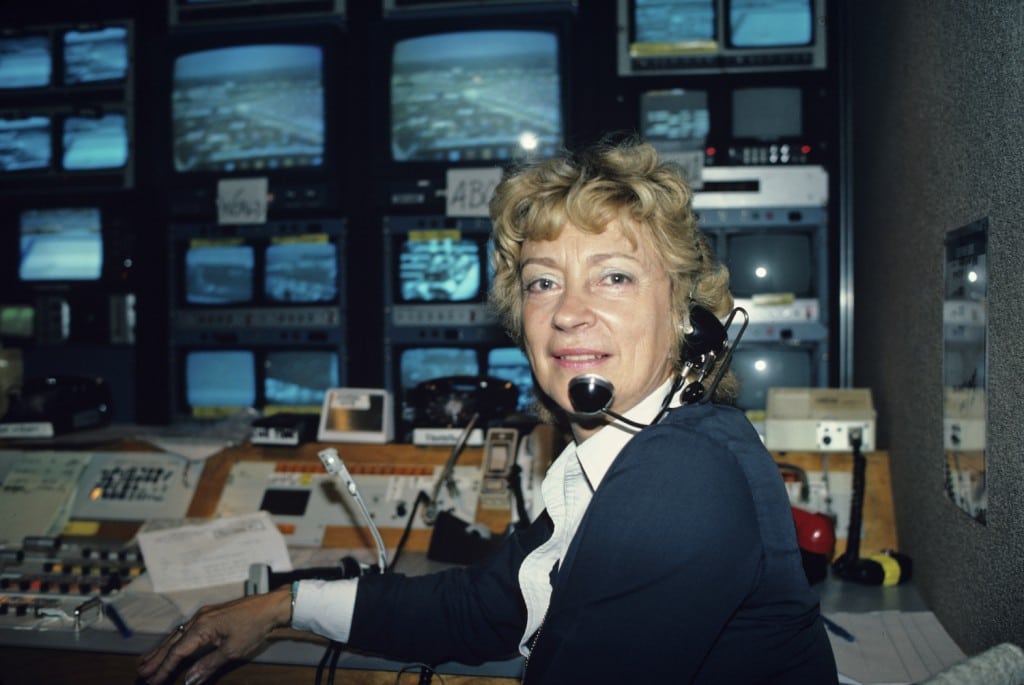 Eleanor (Sanger) Riger, first woman producer at ABC Sports. Thank you, ABC Photo Archives, for the use of the photograph.

I like people who are honest. I love to work with good people, men or women, young or old. But really there are others who have had am impact on me.

There’s Joan Saffa, who is a producer who not only directs, she edits and writes. Also, Pamela Rorke Levy, another strong producer. Gee, I’ve worked with some great producers out here. A good writer I worked with is Charlie Pierson — terrific. There is also a good friend and executive producer, David Kennard, with whom I have worked on many documentaries. There are many others going back over the years—Emile Ardolino and Paul Galan. What I love are teams that work together well.

Being an editor is terribly difficult. You really have to go in there and look at every cut, not only to tell the story but also to make sure that you’re on the frame you want, that the sound works, that the effects work, that the music is in right place with the narration, and the voiceover sits over the picture correctly. You are coordinating and integrating many elements to make the story work, and this takes a lot of love, patience and effort.

Mysterious. I think my journey has been pretty darn mysterious. But I see everyone’s is, every time I interview someone for my work.