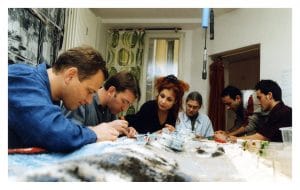 For the last year, few topics have dominated the German news as much as the crises on Europe’s borders. People fleeing the unbearable situations in their home countries are searching for places to build new futures for themselves and their children.

After the summer of 2015, Germany showed the world how welcoming they could be to the tired, poor, and humbled masses. The acceptance level of the new status quo has been less reassuring. Both from the state and the public, the response to the now presumably one million refugees has turned colder in the last year. Standing against this are individuals and organizations doing their best to help the new arrivals settle in and find ways to build a new home, even if it is temporary.

One of these individuals is the Swiss-born artist Barbara Caveng, who started her initiative KUNSTASYL in February 2015. With the inhabitants of the residential home for asylum seekers and displaced persons at Staakener Straße in Berlin, she tries to find ways to navigate the complicated situation of building a home far from home. 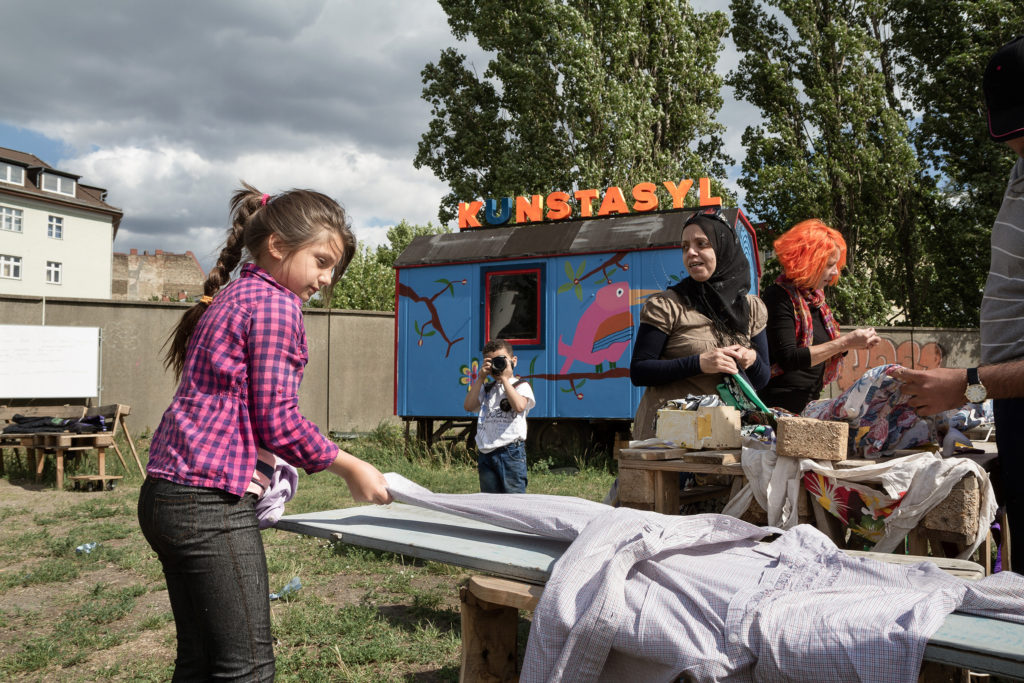 Here she combines her life as an artist with that of a social activist. Next month the exhibition daHEIM: glances into fugitive lives, a collaboration between KUNSTASYL and the Museum of European Cultures in Berlin, will open its doors and give a wider audience a glimpse into this project. 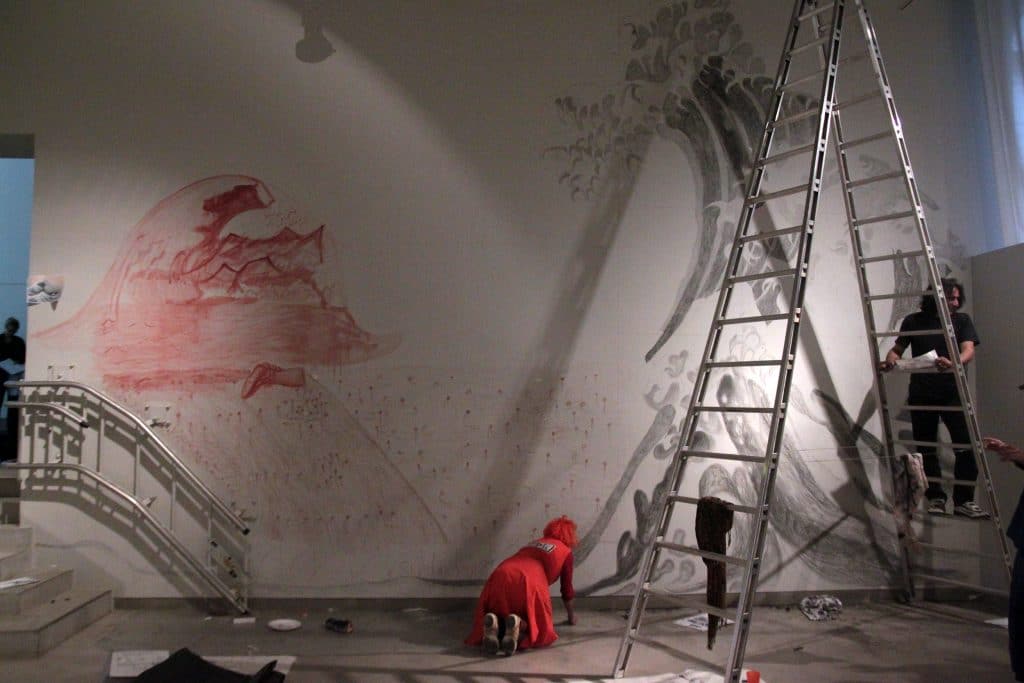 The KUNSTASYL is probably not what one would expect when going to see a project by an artist. Could you describe how you got here?

I came to Berlin in the late ’90s; at that time, the main focus of my work was between installations, sculpture, and objects. At that time, my work already did not take place in studio; it was always outside in the public space. For example, there was my work called “2000minus2.” It was my arrival work in Berlin.

For one year, I walked through Berlin, looking for what this world offered me. Day by day, I took small objects, and at the end of the year, I had a complete household. This shows my work was actually always a reaction to what’s going on outside.

And then, in 2003, I saw a press picture, shortly before the Iraqi War broke out. It was from the aircraft carrier Abraham Lincoln. On its deck, you read the words “Ready Now.” Later, I found out, this writing was spelled out with the bodies of 500 soldiers. I wondered, “What does this mean? Ready now — what for? That was the start, the trigger point for a new artwork. 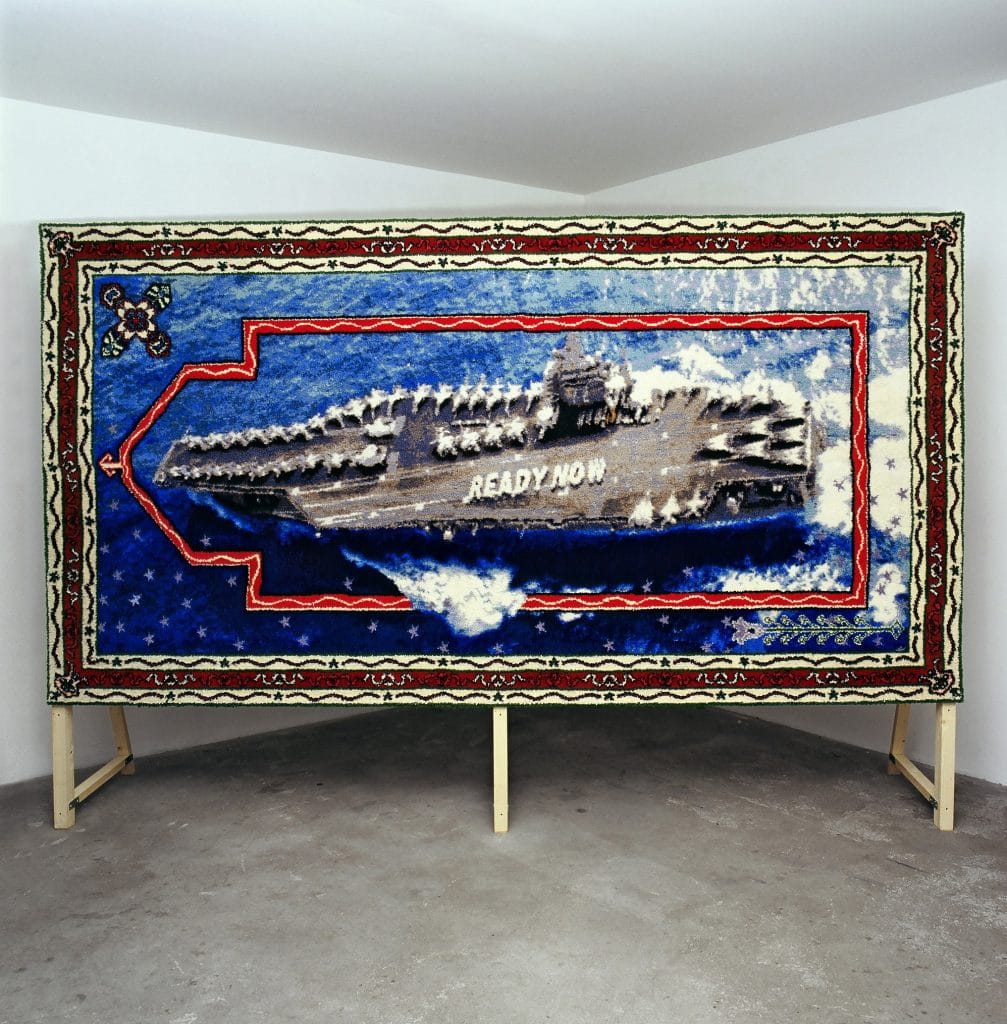 I developed the work based on this press picture and combined it with the shape of the Arabic prayer rug. It was at the time that Bush was speaking — dividing the world into good and evil. I said, “Okay, how can you make this division?” We are on the one side, and everybody else on the other side is evil? I invited people from different walks of life to come to a studio. Together, for more than half a year, we would knot a rug of 330,000 knots. 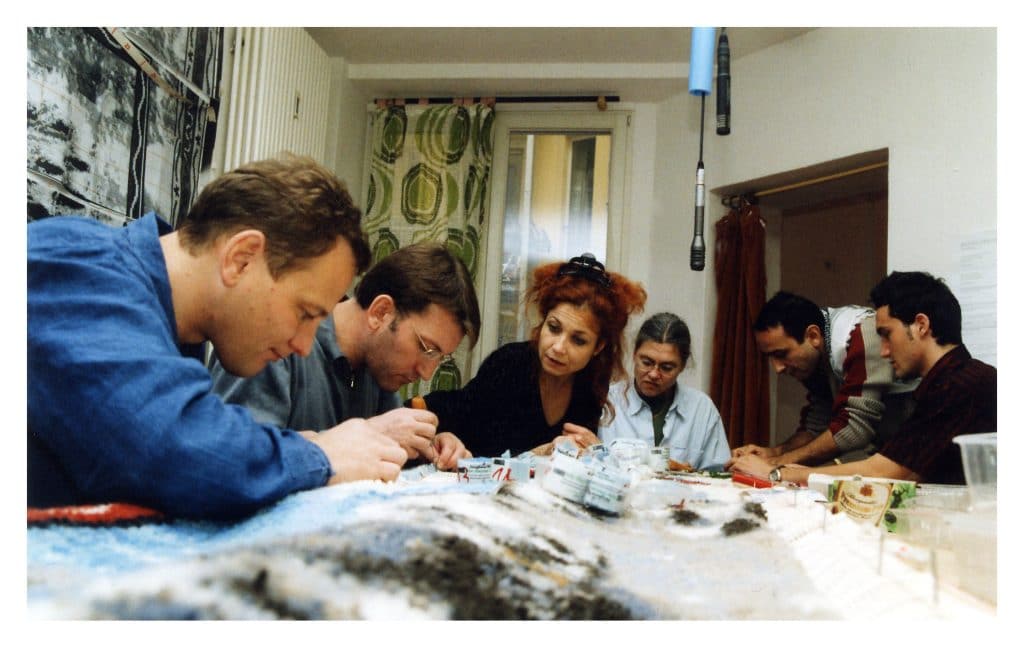 I installed microphones on the table. Everybody was aware of it, but nobody knew who would be sitting with whom at the table. Where does this person come from? Who are they? The range was very wide. There were people from 30 nations. People talking about cultural identity, about everything, with each other. In the installation, there is 80 out of the 900 recorded hours of conversation. In the end, this means nobody could leave the installation and say, “I understood.” Nobody could have listened to all 80 hours.

For me, it’s a very good metaphor for the situation itself. It’s dangerous that we so quickly think, “I understood.” It’s something I have always confronted in my work. From that point on, it’s been an important focus of my projects to work with people.

It must have been obvious that KUNSTASYL would be an overwhelming and long-lasting project. What made you start it?

This special project has a long history behind it. In 2011, I was in Damascus, Syria, on an art scholarship. I had the chance to see the developments leading to this point when it was at the verge of war. People were talking about a crisis, but for me, it was clear. Damascus was already affected. It started to be dangerous. I had some uncomfortable experiences for the first time in my life. I made a public work in Damascus during my time there. Then I did another work. I thought now I’m through, now I’m finished. Then it started; the crises couldn’t be ignored in Europe anymore. I went to Lampedusa. When I came back, the people who had fled from Africa and the Middle East were in Berlin. After the long journey I left behind me, now it’s part of my world. What does it mean? How is it possible to share our lives?

This project is mainly about space. We in Europe are now fighting for our space: closing and reinstalling borders. Using words that divide: What is this space, and what about me? How much space am I ready to offer to somebody? Am I able to step back to make space, or am I just saying, “Look, this is my space. Yes, you can also move in this space, but it’s my space”? These are questions I’m really, really interested in.

Despite the hardships, what would you say you have gotten from this project?

The project has now been going for about 16 months. Doing this, having been living all this time with this project, it’s like being in a long-term performance. We are having an extremely hard time at the moment. Germany has changed their policy. People are being cruelly pushed back to their countries.

It is a question the inhabitants also ask me: “What do you get? We understand you’re not becoming rich. So what do you get?” I mean, it’s really simple, it’s enriching. It’s amazing because who has the chance to experience something like this? Day by day, 24 hours, all these aspects during such a long process.

Of course this is about changing yourself. Whatever I get through these projects is always the starting point for the next project. It is ongoing. One of the main points is that the project has a lot to do with giving people some dignity back, and through this, you make people strong.

How have you seen this project affect the inhabitants?

Bereket Kibrom’s story is a very interesting example of what we have been talking about. Bereket is the only one from Eritrea living in the residential home at the moment.

Bereket is from Eritrea. For months, we tried to communicate with him. We said, “Bereket, hi.” We said, “Bonjour.” Nothing worked. Then we had a sewing machine, and he got interested. Bereket is now one of the core group who is regularly with us in the museum and working on a big installation.

I would say Bereket changed and he took something from the whole process. Maybe it’s the first time that he is in a relationship with people like us. He’s coming, he’s joining us, and he is completely open, and interested in the artistic process.

My work does not start from point A and go straight to point B. I don’t say, “I have this project and that’s the aim; let’s go there.” This is much more about seeing, “Okay, what is he doing? What is he bringing?” It’s similar to my “ready now” project, which was about knitting, the image of connecting things. You could say weaving, knitting, knotting, and sewing is a metaphor. My work always has a lot to do with these kinds of processes. It is about making connections, within our community here, but also between us and the outside.

To create an exchange between this place and the neighbors is a huge project. After this period of one and a half years, I can say we are a community. We are a body of people from 15 nations with many different beliefs. You can say we have created something new, something we can call our own. That’s what I wanted to know. Is it possible or not? I clearly have to say it is possible, but it’s hard work for everybody.

Would you say, as an artist, you’re especially qualified to help bridge the gap between this new community and the community that already lives here?

It’s a really good question. Sometimes, I say, “Yeah, I’m just an artist.” Maybe my real profession is a flâneur. I have always tried to find a way that I can walk, I can move, in my projects. There is something — let’s say it’s a gift — that if you can take care of it, it’s also a talent. I have an ability to reach people, to make a connection between them, and with a project. When you have built something, then you have something, which has power. For me, it’s great to work with this power, with this body. That’s why I prefer to say body and not community, because for me, it’s a body with power.

For more on Barbara Caveng: KUNSTASYL and daHEIM: glances into fugitive lives.