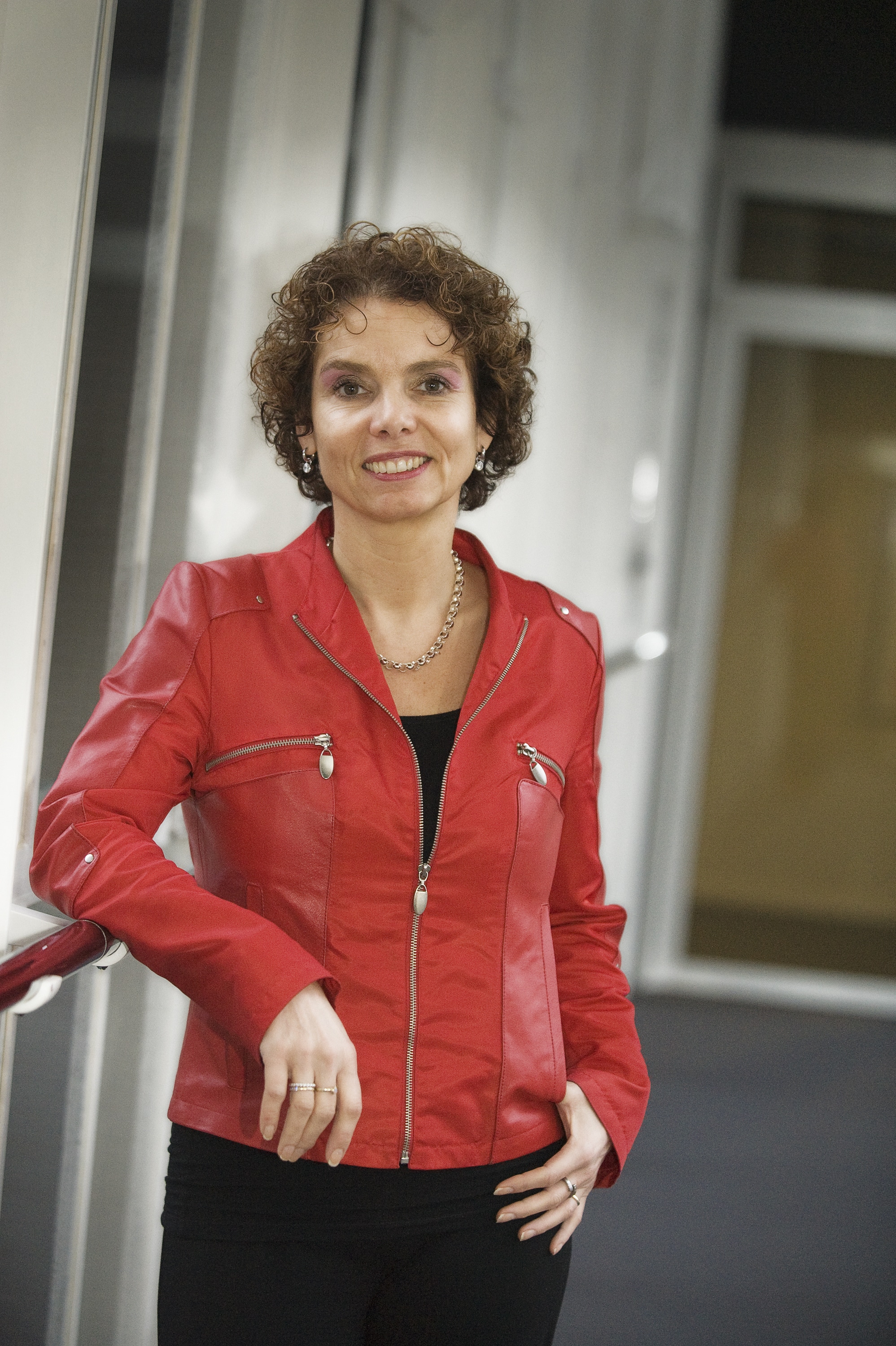 During impactmania’s interviews with Gilbert Curtessi from SUGU and Daan Roosegaarde from Roosegaarde Studio — both entrepreneurs praised the City of Rotterdam for creating a space for innovation.

Rotterdam, home to one of the world’s largest harbor, has long been a multi-cultural city. Today (2018) half of its inhabitants have a migrant background. Over the last two decades the city has been successfully revitalizing a number of its neighborhoods, which started with the arrival of the iconic bridge Erasmusbrug. It now is looking at an innovation district in the city and becoming a Smart City.

Paula Verhoeven of the municipality of Rotterdam shares her insights on fostering successful private-public-nonprofit partnerships to support social impact.

Do you mean the ultimate smart city?

The ultimate smart city is a city where all systems and processes that make the city works like a system of systems with the objective to achieve a status of continuous improvement of the city. Smart City Rotterdam is not there yet. We are making great progress with multiple smart city initiatives combined with an increasing number of innovation hubs with the objective to stimulate and facilitate innovation in and for the city.

Is there a city currently in the world that is a model city?

No, not really. As mentioned, a real smart city has a high level of integration and interoperability. That is the real challenge for every city, but due to the complexity, this is very hard to achieve.

How do cities learn from each other?

The city of Rotterdam has more than 30 smart city-related partnerships with multiple stakeholders, on international, national, and regional levels. Most of them are related to one specific Smart City topic. That is why I am so pleased with the new Smart City Lighthouse call project that we have been awarded recently, in which we combine mobility transition and energy transition, combined with ICT solutions.

The city has worked with many other parties in revitalizing a community such as Hart van Zuid. What is needed for a successful public, private, and nonprofit collaboration?

First of all, there must be a consensus about the strategy and agreement on the work-packages and financing. Co-working and co-financing is often the best solution. As a facilitator, the city government should focus on realistic long-term objectives. If there is no real opportunity to achieve the objective in a long term without government finance, then you should look for alternatives, or not start at all.

What is the vision for the Rotterdam Innovation District?

As for locating innovative and successful new companies in Rotterdam, there has to be a physical place to test and experiment. This physical place for experiment and innovation will be the Rotterdam Innovation District (RID). Here we want to attract talent and further develop, accelerate the growth of start-ups, and scale-ups and strengthen the position of Rotterdam internationally as the location for innovative business. Stimulating crossovers between new and existing companies, between sectors, with knowledge and research institutes, and the surrounding neighborhoods is one of the key ambitions of the RID.

What are some of the factors that encouraged entrepreneurs to settle in this area?

Next to the Rotterdam Innovation District we have several other innovation hubs and is really blossoming at this moment. Rotterdam is a city of distinctive character: energetic and constantly changing. Rotterdam and its inhabitants never shy away from experimentation. Like the Nieuwe Maas, a waterway represents a powerful symbol for the city’s constant motion.

Rotterdam is a city where the “Make it Happen” mentality can be seen and felt. The city is supported by organizations and people that make a clear choice for Rotterdam and add their own take on the Rotterdam mentality and ‘can do’ spirit. 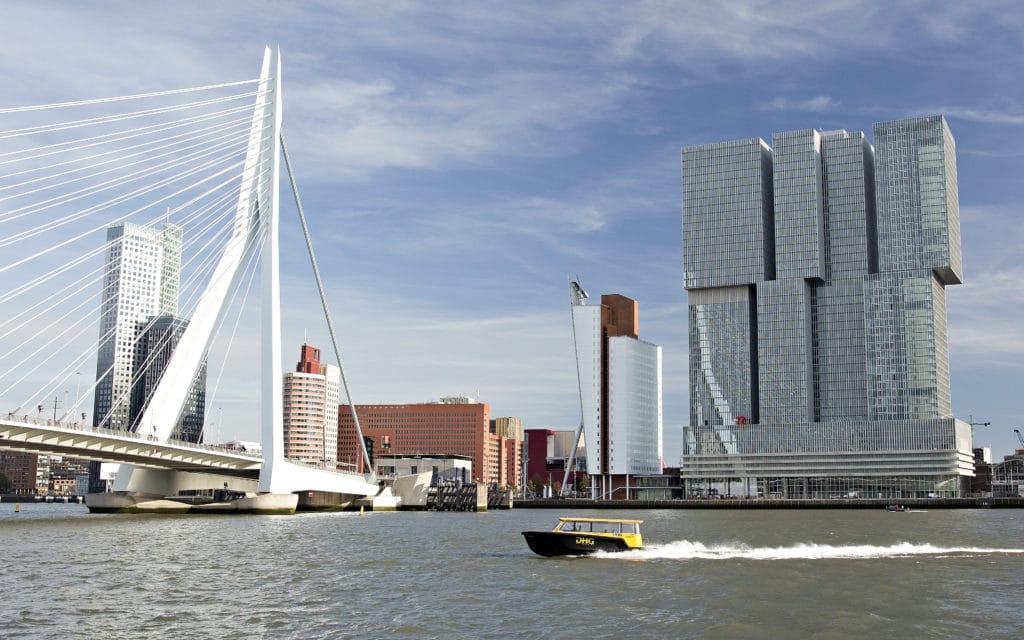 Rotterdam’s Erasmusbrug connecting downtown with the southern part of the City. Skyline of Kop van Zuid.

It is also famous for the Port of Rotterdam for its wide variety of branches and well-known innovation hubs within the region, such as the Cambridge Innovation Center, Venture Café, Erasmus Centre for Entrepreneurship, SuGu Club, BlueCity010, RDM Rotterdam, and YES!Delft. They are all there to help, advise, connect, learn from, and teach start-ups, scale-ups, corporates, and entrepreneurs. Venture Café is the place where they all meet, connect, and share.

We focus on Food, Clean-Tech, maritime, and medical innovations. And of course we have striking innovative architecture that is way ahead of its time. The inspiration derives directly from the city and the people living and working here. There are so many interesting initiatives on a small and large scale. Typical Rotterdam thinking is all about opportunities. It’s in our DNA. That’s something which makes me happy every day.

What can citizens do to support the City’s development?

When it comes to projects taking place in the public space, we involve inhabitants and entrepreneurs on several levels. Sometimes we just have to inform them. But on other occasions we are putting them in charge of creating solutions. For example: maintenance, public use, or design.

How do you measure success?

If something has more than one goal. For example, a bridge isn’t solely a way to get across water. Our Erasmusbrug has been, and still is, an accelerator for a new city development. Thanks to this eye-catcher, we’ve not only connected the Northern and Southern part of the city with each other, but as a result, a better-connected city with 4.500 houses and skyscrapers were built in between.

In general, what is required for social impact?

This is, in general, a difficult question. Our objective is to improve the city for our citizens. Social impact is an important part of that. How do people meet each other, in what context, and with what objective? These are things that you have to study and include in your smart city strategy and actions. In the end, 75% of the change you want to achieve is accomplished by behavior. That is why the social impact is so important.

With thanks to Dave Geensen at the City of Rotterdam.