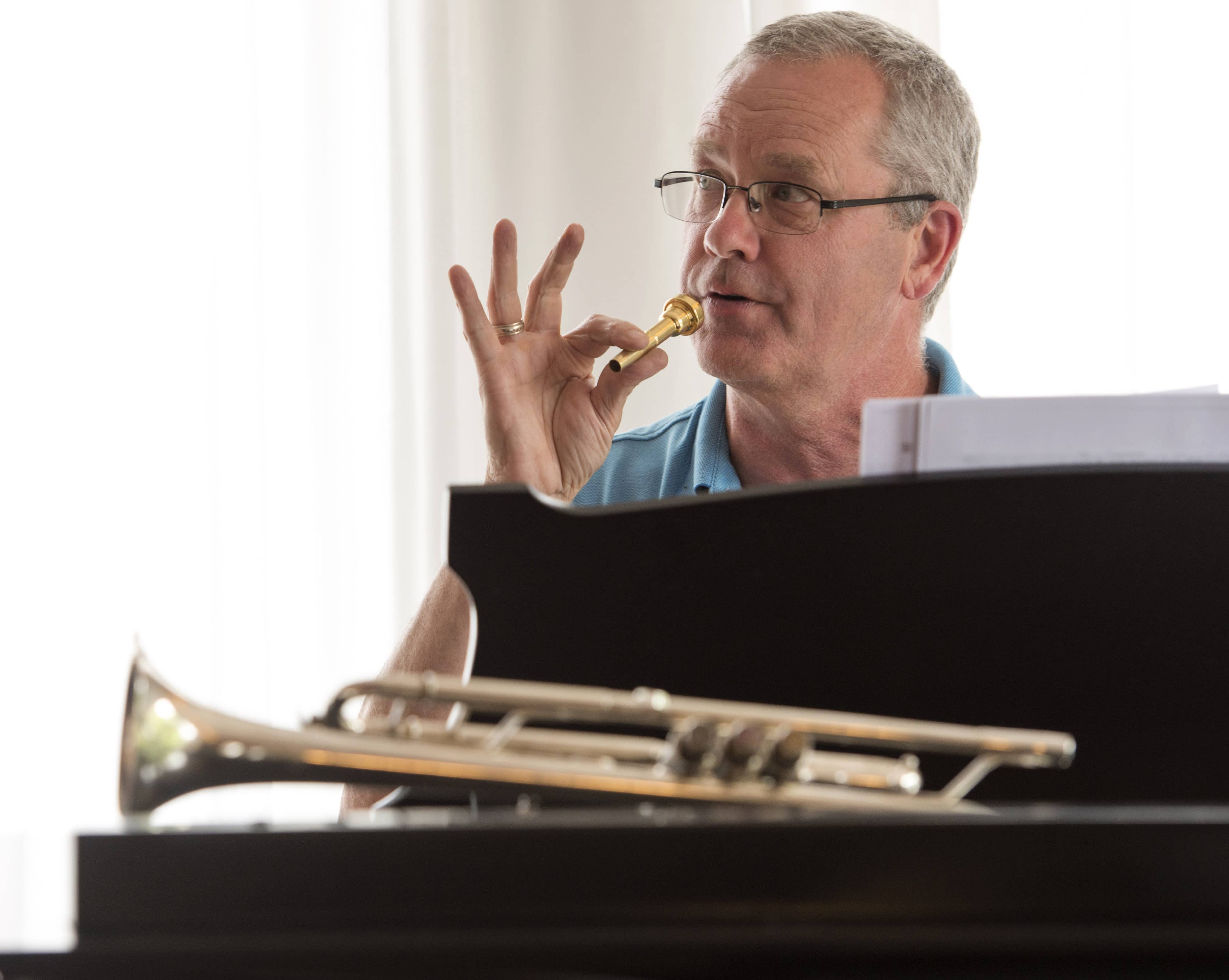 We caught up with Jon Lewis at Central Station, Amsterdam after his two-day visit with Hub Van Laar in Magraten, Limburg.

What brings you to the Dutch province of Limburg?

Van Laar in Margraten, Limburg makes flugelhorns for brass bands and orchestral horns for Amsterdam’s concert hall, Het Concertgebouw. They, as well as the many people of Rotterdam, play jazz on his horns; jazz is huge here in Holland, as you know.

When I was working on the Star Trek franchise, they thought that it would be really good for me to play on one of Van Laar’s horns, which worked out great. Since then, I’ve used that horn to play in about 350 to 400 films, including in Star Trek’s Deep Space Nine.

And you played on that same horn for Star Wars?

Yeah, and for about every movie I’ve done. We’ve been talking about making it a collection horn for about 11 years now; we just haven’t been able to make it happen. So finally, I said, “we really have to…my horn is 11 years old!” Not that that’s old, but it’s one-of-a-kind. If something happens to this horn, then it would really be a challenge.

How many horns do you have?

I have no idea. Maybe 25, but they’re all different — there’s a B flat trumpet, a C, E Flat, D, flute, horn, cornet, C cornet, E Flat, trumpet, and piccolo trumpet — I have all of those and then I have multiples of them. I think I have four C trumpets, about seven B flat trumpets…

It has a character sound that I’ve never experienced before… actually, I have — the original horn that I started recording with was a Bach trumpet. I still have it and l did all of my early recordings on it.

Somewhere in early 2005, Doc Severinsen came out with a new line of horns. Since Doc doesn’t really play C trumpets, I went down to try it. Doc was great and I ended up buying one of those horns.

At the time, I had the Bach that I thought was really bright — almost too bright. I just felt like it was not as pretty as it could be, so when I came to see Hub Van Laar, I found the perfect horn and said, “I want that horn right in the middle.”

Hub is a wonderful man — a really great instrument-maker. We had people coming and going all week. He had announced that there was another trumpet player, Howie Shear, a jazz player. Hub called it “America Week”. People were coming in for lessons, which was really fun. 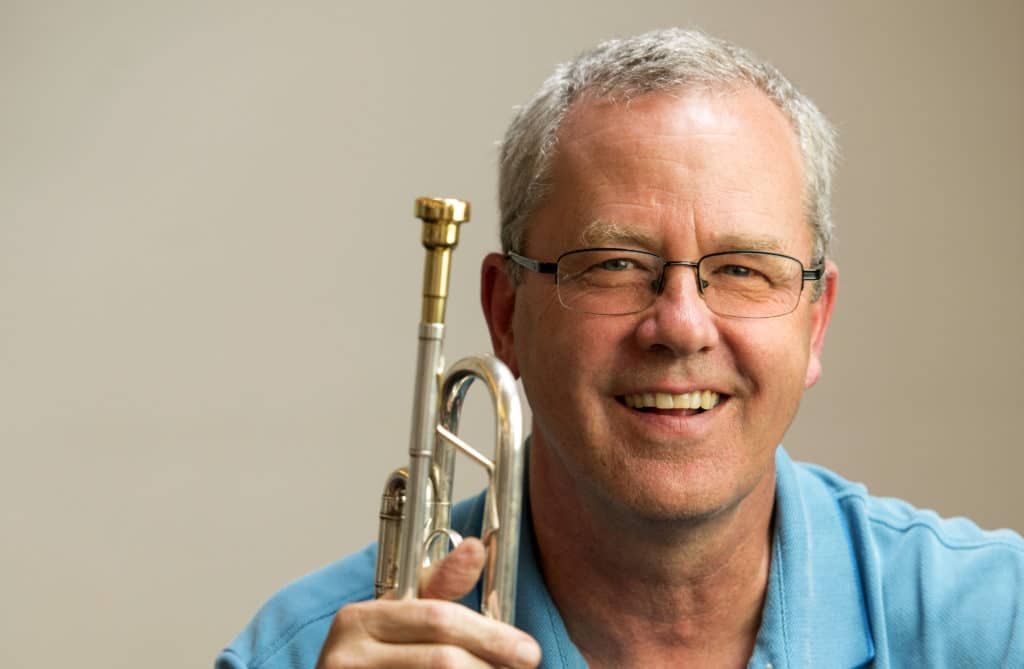 Hub has this beautiful compound and a shop in his house. Every day around noon, we’d stop, get lunch, and drink wine while sitting on his beautiful property — the weather has also been gorgeous throughout. “Is it always like this?”, I asked. Apparently, it had poured during my recital at the concert today for like ten minutes — I never even saw it.

The recital itself was pretty impromptu — we didn’t get to rehearse. They had just hired a pianist and we all talked a little bit beforehand…

Talk about an impact on me…that horn has been with me for 11 years. I’ve been working for 25, but 11 years of it has been with this horn.

And you did all these brilliant movies with it?

Absolutely, and now I’m really excited about the idea of Hub Van Laar actually making a production horn. Over the years, there’s been at least 15 people that have said, “We’re gonna need that horn.” It will no longer be one-of-a-kind, and that’s going to be really exciting.

Is your name going to be on it?

Yeah, hopefully they spell my name right. [Laughs]. J-O-H-N would not be good. I wanted exactly the same trumpet ‘cuz every time someone tries to say, “No, that sounds better,” I tell them that I don’t want better. I want the horn to sound exactly like my old horn.

Can you really replicate an instrument to be exact?

No, I don’t think so. You have a better chance of doing that if you make them at the same time. What is really fascinating to me — where Hub is really, really amazing —is that he had like eight trumpet bells. I have a mute and put it in one of them and I can tell if the shape of the bell is the same by the way it fits, so right away I just said, “That one’s good.” I was able eliminate or narrow my choice down to three or four bells. 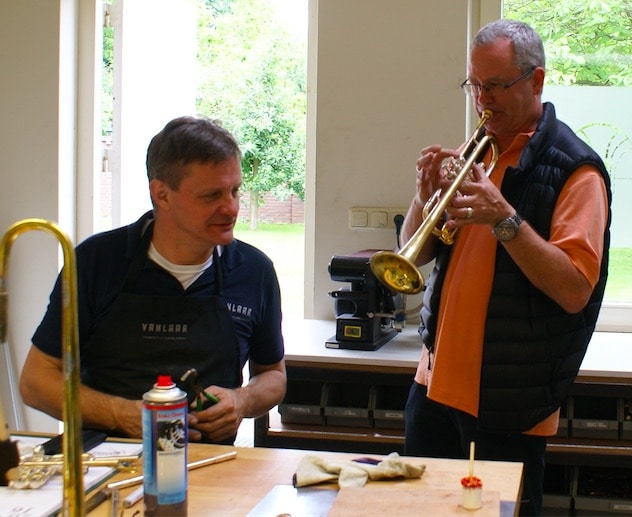 Hub and I are on the same page completely. Having already measured my horn for the lead pipe, he gave me a couple of valve sections, a couple of tuning slides, and just kind of fit things together. I’d say, “Yeah, that feels good, or no, that doesn’t feel so good,” and once I said, “Okay, this is really good”, he had me move the bell to get it to where it played the best and soldered it. That was fascinating.

When it came to the water at the end of the horn (they call it water here, but it’s pure saliva), moving it made all the difference. I mean, you move a thickness of a dime and it makes a difference.

Why did you choose to play the trumpet?

I don’t know why. I really got interested in it during my freshman year in high school. While in a great high school band, there was a lot of turmoil happening in my life — my mom was dying of cancer. We also had difficult family dynamics with divorce and moving around a lot. Though there was a lot of unrest, it seemed like a good childhood to me.

It was kind of difficult, actually, so when I got into the band situation, it was like a family to me. Then I got passionate about it because it was a great band, and who wants to be terrible in a great band? I started practicing and got better and better. Form there it kind of took off. I knew that that was what I wanted to do. The trumpet became my protector.