In August, impactmania interviewed Jon Lewis, First Trumpet for Star Wars, The Force Awakens. Lewis has played on 800-plus motion picture soundtracks and close to 1,000 television shows. He is working with trumpet maker Hub van Laar in the Netherlands on a Jon Lewis Signature trumpet.

impactmania caught up with the maker behind the trumpets treasured by renowned symphony orchestras, revered jazz players, and seasoned studio artists.

Van Laar shares why he has no desire in scaling up his business and how at age 13 he made a charcoal drawing of jazz maestro Ack van Rooyen — 14 years later, Van Rooyen called for a Van Laar flugelhorn.

How many of trumpets do you make a year?

At age ten, you already knew that you wanted to be a trumpet maker.

Yes. I wanted to be a farmer and a trumpet maker. [Laughs.] It was a long road, but I did it. At 25, I started making trumpets. At 20, I started learning. First, I was in Stuttgart, Germany for four years. Then I was seven months in Wisconsin and Ohio, U.S.

In 1990, the first of May, I started repairing a little by little. I looked what was in the market, something I could do better or improve on other brands.

We first started with flugelhorns. The Dutch fanfare bands have the trumpet, trombone, tuba, euphonium, and saxophones. Instead of clarinets they have flugelhorns. All those big brands, they don’t put a lot of energy in making flugelhorns, because the market is not that big.

Why at the age of ten did you wanted to be a trumpet maker?

Someone has to make them! [Laughs.] I don’t know. Everything in life has a reason. You have to do what you feel in life. My grandfather worked with metal, he was a black smith. The farmers in the area would come with the horses. I had uncles who also worked with metal. I took it in a bit different direction!

What do you feel was the main difference working in Germany versus in the States?

In Germany, it was a small company with several people. We have to do everything from the beginning to end. In America, I was at a big company. The whole day you would only make one thing. That is not what I wanted to do, ‘cause I would go crazy.

Van Laar is a very small company, the people who work for me, they know they work for Van Laar. In America, you are making parts for this guy, parts for that guy. Here, people in the workshop have direct contact with customers. They all see customers and everybody is free to make the work better.

What has been a surprising learning for you building your business?

Surprising and also most difficult are the people. There is only one factor in trumpet making that is not stable, and that’s the client. The most difficult is how to change things, when the client says, “I want a brighter trumpet, I want this, and I want that.”

Every day you are dealing with different types of people. If you go to Japan, they want a completely different sound. They want a sound like Yamaha. Even if you look at France and Germany. France tends to like it ‘légère,’ a very light sound, and in Germany ‘muss alles groß,’ big and full. The countries are only 50 kilometers away from each other but they want completely different sounds.

How can you be everything to everybody? Your clients range from jazz players, studio artists, to classical musicians.

It doesn’t make a big difference. You have only one trumpet. If I have a trumpet for studio artists and they have to play in the church, they cannot go home and take another trumpet because they have to go and play. So this trumpet has to be for everything.

What people count on is that I understand how to customize trumpets. I’m not a guy who talks a lot; I do it. [Laughs.] It is 25 years of learning by doing. There is not a book on how to make trumpets.

A lot of entrepreneurs we interview talk about scalability. The focus is on growth; it’s all about scaling up. But it sounds like you don’t want to expand much more.

No, that’s the last thing I want to do. I have a very big problem; I have more than 280 back orders. I can add another person and another person. But that’s not what I want. I don’t want to go in that direction.

I want to make the bells and I want to make the pistons. I don’t want to sit in the office all day. I have never called to get clients, it happened. Don’t ask why people come here. I didn’t call anybody! [Laughs.] 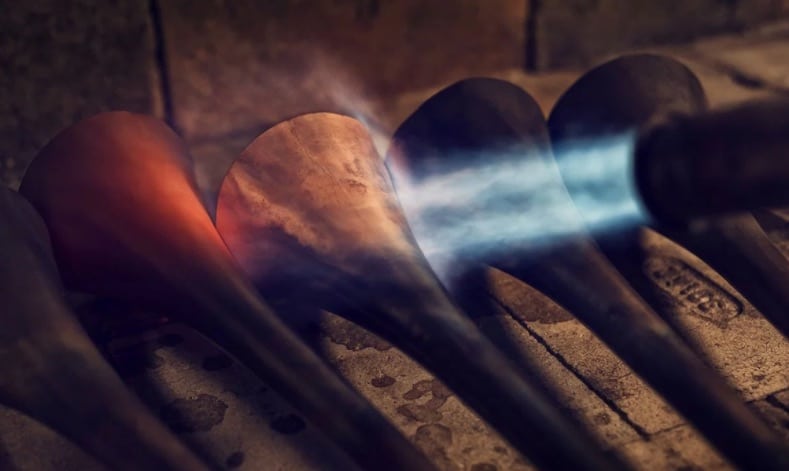 They call because you’re focused on making trumpets!

If you do the best, you have to stop. At some point, it can’t get better. I have a lot of colleagues in Germany. They claim they make the best trumpets in the world. I tell them, “Stop, stop! Don’t make another one or they can only get worse!” [Laughs.]

Every day you have to make it a little bit better.

I’m 50 years old. I have to find somebody to take over the business. I have someone here, he is 20 years old and he’s like my son. Then, last week, we opened the new factory in Klingenthal, in Germany. That was a big project. I am working on a Japanese garden, in Germany. [Laughs.] It’s a big property with a creek. I have everything there — I can sing, I can paint, I only need 4-5 hours sleep. I am what I am. 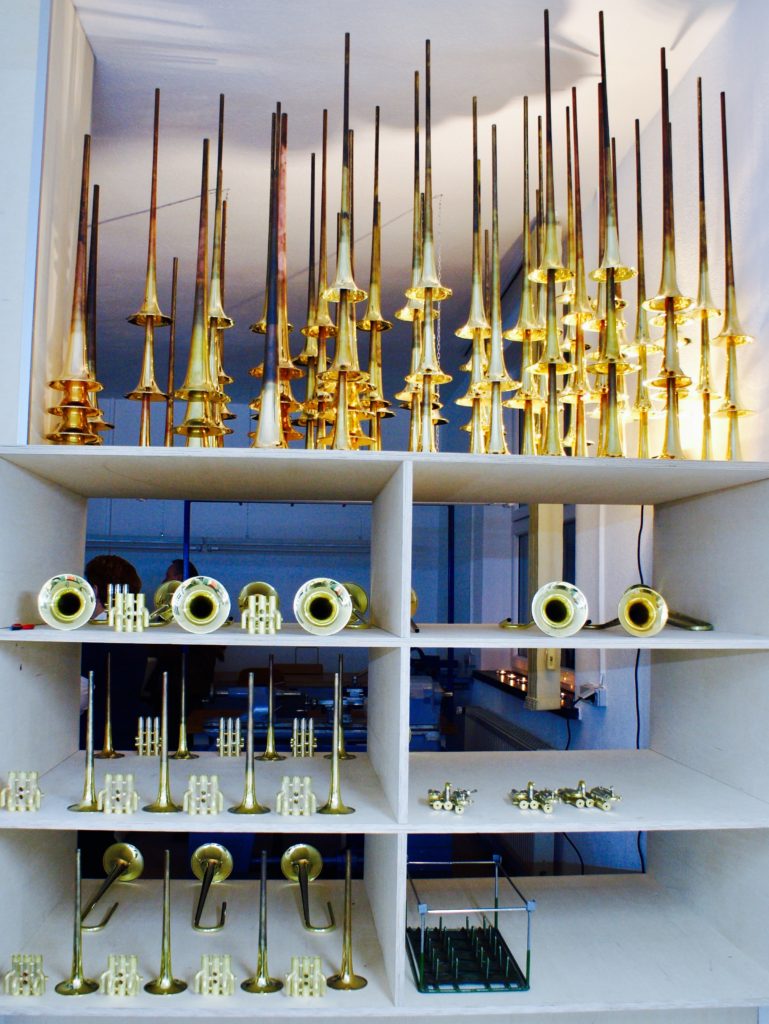 I read that there’s a Hub Van Laar day in Japan?

[Laughs.] That’s always in a weekend in September. I go together with Bob Reeves, he’s a mouthpiece maker in Los Angeles. Eighty Japanese trumpet players who all have a Van Laar trumpet come. It’s so sweet. I really love it. Those people are so so honest. I love Japan.

Who has made an impact on your professional DNA?

When I was 13, I made a painting of Ack van Rooyen, a world famous jazz player. I don’t know why I made the painting.

Van Rooyen played with another trumpet brand for more than 50 years. I met him when I was working in Germany. To me, Van Rooyen was so fascinating. Then all of a sudden he calls me and says, “I heard you make flugelhorns, can I try one?”

It is unbelievable. The last 20 years he has been playing my flugelhorn. Now, I am like his grandson. We are so close. It’s funny, when you’re 13 years old, you make a painting of somebody; 14 years later he calls and says, “I want your flugelhorn.”

What have you learned from Ack van Rooyen?

Do what you feel, I think. Everything I feel at the moment, I do. I don’t think a lot. People accept it or don’t accept it. Mostly it goes well. Be what you are and don’t be other than that. Life is too short. You are born on Monday, on Friday it’s over.

What would be a Hub Van Laar passion project?

I have so many things. I love to sing. I play the cello. Five years ago, I bought a Steinway, and now I’m learning the piano. Next week, I am learning Qi Gong.

Life is beautiful…Yeah, I’m a little afraid of what’s going on in America and Russia, watch all these people shout and shout. They don’t think anymore. Everybody has a big mouth. But I have my own garden, eat my own vegetables, and that takes you back to normal.

What insight do you have for people who are starting out as an entrepreneur?

If you think you can do it, do it. ‘Cause my father said, “Don’t do it. You cannot earn any money being a trumpet maker.” I said, “I’ll do it anyway.” After ten years, he said, “Okay, it was not that bad.” [Laughs.] If you want to do it, you’re already more than 90 percent of the way. It’s not easy, never give up, and always go on and on and on. 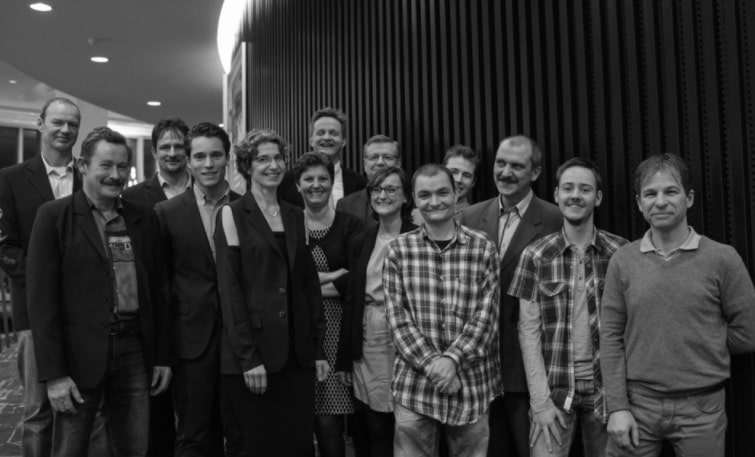 Have you ever wanted to quit?

No, never. That is not my style. Of course, now I have 15 good people around me. But if the feeling is not good, you need to stop. If you go to your work, you should whistle. Put in your positive energy.

The Jon Lewis Signature trumpet made by Hub van Laar will be available Spring of 2017.