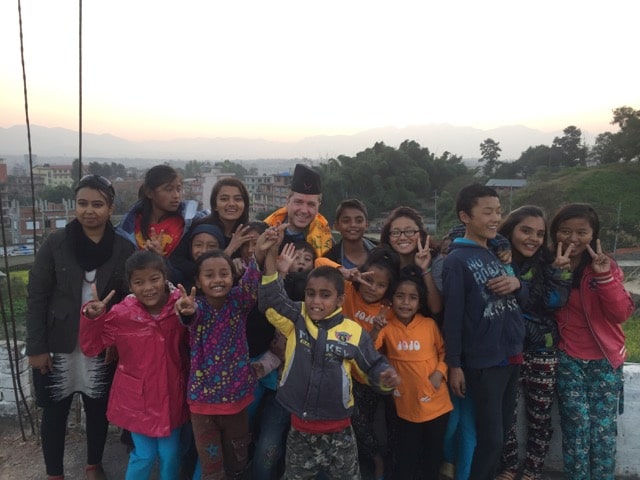 Apart from advising corporations on Corporate Social Responsibility, José Montero is also the cofounder and chair of Trekking for Kids, a organization in Washington D.C. that organizes trekking while raising funds for orphanages.

impactmania caught up with Montero in between his trips to Switzerland and Colorado.

Why Trekking For Kids?

What we tried to do is to take a sport that is very much centered on me and take it to we. I want to climb, I want to do this peak, and I want to do this summit. Now, you can do a trek and enjoy the outdoors but at the same time leave a lasting impact in the area where you trek.

What is the impact on the trekker?

It’s a very powerful experience. It starts at the orphanage. You see the children who live there, who will be children that many times give us more than we give them. 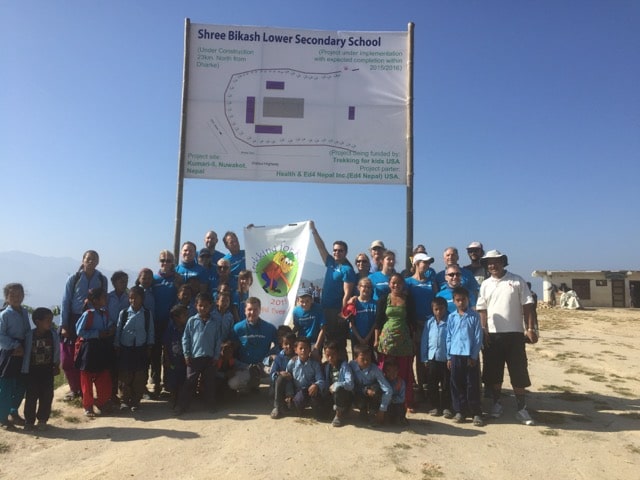 Trekkers and a few of the 400 children of the TFK rebuild school.

Most of the coveted trekking destinations are in the developing world. When they go on an expedition, first of all, trekkers always have the shock of going to one of these countries. Then the next thing is you get together with a lot of folks from all over the world who have come to make an impact. We invest in high-impact infrastructure, giving orphanages a platform toward sustainability.

Every trekker pays their own way and commits to raising at least $1,000 for that high-impact infrastructure project.

Say a trek happens in June. Three months before that, trekkers are committed to raising the funds. Most trekkers will raise twice as much as the minimum requirement.

Then, the construction starts. We always hire local work to continue to build wealth in the community where we’re going. By the time our trekkers arrive, the project is 95 percent done. 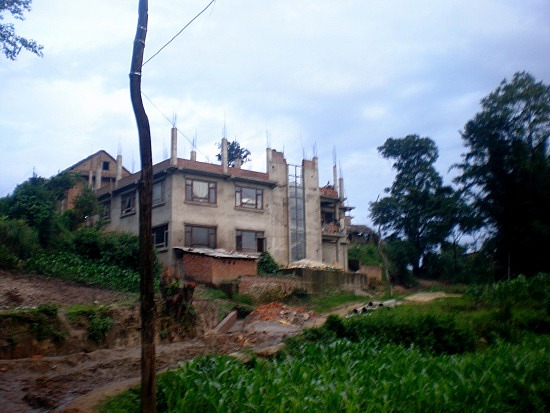 Our trekkers spend a day, a day and a half, finishing this project. They and their donors can really see what they raised money for. They see what the impact of the before and after has for the children. They’re seeing these orphanages change from being just orphanages to being homes.

How do you ensure correct stewardship of the raised funds?

We maintain a relationship with the orphanage. We continue to check into them. Fortunately our projects are normally completed by the time we leave. We will have seen that the funds went to the right organization, the right project, and the right place.

Some orphanages have master plans. They say, “Listen, over the next five years, we want to grow here.”

For example, since our first expedition to Everest Base Camp in 2010, when National Geographic selected us as on their “Top 50 Treks of a Lifetime”, we have been helping the Orphaned Children’s Rescue Center (OCRC).  It’s an orphanage of 30 children, both boys and girls from ages 4 – 18. They run a very stable and professional operation, and the rate of children who stay at the orphanage through high school graduation is very high.  It is located just outside of Kathmandu, in a city called Bhaktapur (which is a World Heritage site).

We helped OCRC remodel the first two floors of the building. Then during the next expedition, we added a whole new floor to the structure.

Then this past expedition, we visited with them and they came with a proposal to build a greenhouse on the roof. TFK’s director of operations maintains a relationship with them, and we see how they continue to evolve. 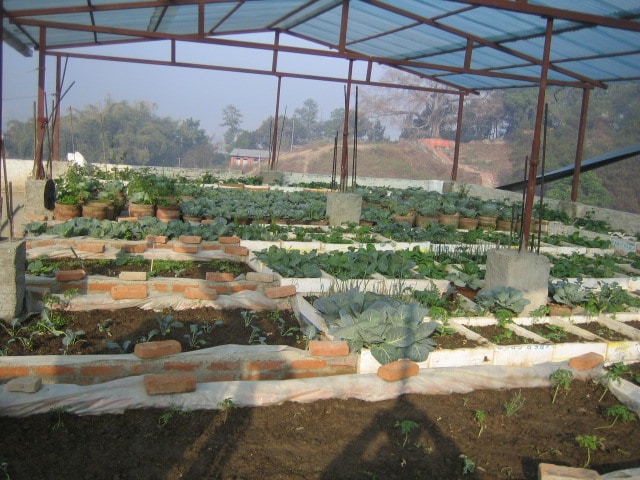 In fall 2015, TFK added a green house on the roof of the building, which allows the orphanage to grow 60% of the food required to feed the children.

Could you sketch out what your vision is for Trekking For Kids?

The idea for Trekking For Kids is to be the brand name for social-impact adventures five years from now. The way to do that is giving folks the opportunity to get out in the outdoors, starting with trekking, eventually maybe going into other outdoor activities as well — giving folks the opportunity to really say, “Hey, listen, I can enjoy the outdoors whether it’s on a TFK trek or on my own and still provide social impact for others around the world through what I’m doing in this sport.”

What is the main reason a person treks?

I think human beings have an attraction for nature. You’re always looking up, and looking to get out and enjoy this planet that we have. We’re hardwired for it. How do you make more connections and extend that passion to also do something to help other people who are less fortunate?

Do you feel that there are more people rediscovering nature?

Absolutely. Even if they say, “Look, this isn’t my thing for the rest of my life,” they come back with this feeling of accomplishment, of really having reconnected with something.

Sometimes, it takes them a while to figure out what they’ve reconnected with. There are those who are cautious at first or they’ll always be cautious. We have the Shenandoah around us. I’ve taken groups of friends out there. And my god, this is really out of their comfort zone. A trail. It is like Gucci goes camping kind of thing. [Laughs.] They don’t necessarily like the mud, the rain, and the cold, but there’s still something about nature.

You and your sister grew up with such strong purpose. Where did that come from?

My father was a Catholic priest for 20 years. We grew up with the story of him being an orphan of the Spanish Civil War, growing up by himself and all the hardships that orphans go through. At the same time, we were in a very valued home in which we’re here to do well for ourselves — but always have to look out for those less fortunate. My mother, she came from a well-to-do family in Cuba, and was in her freshman year in Louisiana State University when the revolution happened. She never went back.

[My] grandparents lost everything when they came. My grandfather had a very prestigious career in Cuba, and at 65, he had to come over; mowing lawns and doing yard work in New Orleans.

What would your father say of your journey?

I think he would be very happy. My father passed away from liver cancer years ago, which is a very sad process, because they [liver cancer patients] start to lose a lot of their consciousness.

The last coherent conversation that I had with him — he was the one who initiated it — was about how amazing Trekking for Kids was, how I had to continue this. He said, “So many people can really benefit from this. It’s such a different way of helping.”

I think he would be looking down at everything that we’ve done and be very happy. I was at Everest Base Camp. The organization has been to Everest four times, and I had not been yet. Going up from village to village and seeing our Trekking for Kids stickers… Seeing how along the way [TFK] trekkers from past expeditions had put it up there… It was very moving for me. 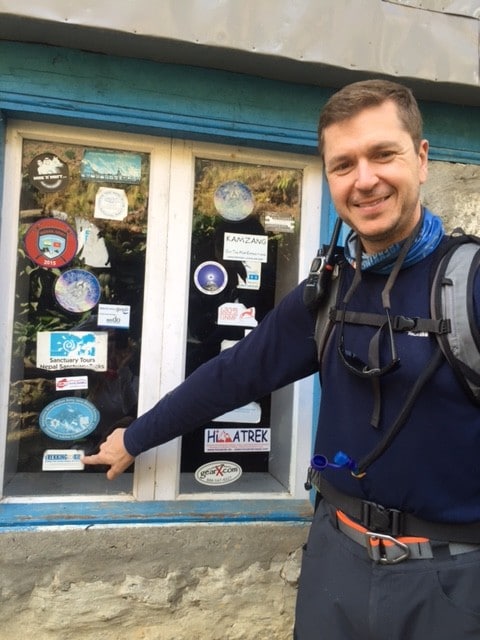 José Montero, Jr. and Trekkng for Kids stickers at tea houses in the Khumbu Valley all along the trail to Everest Base Camp.

For more information: Trekking for Kids.