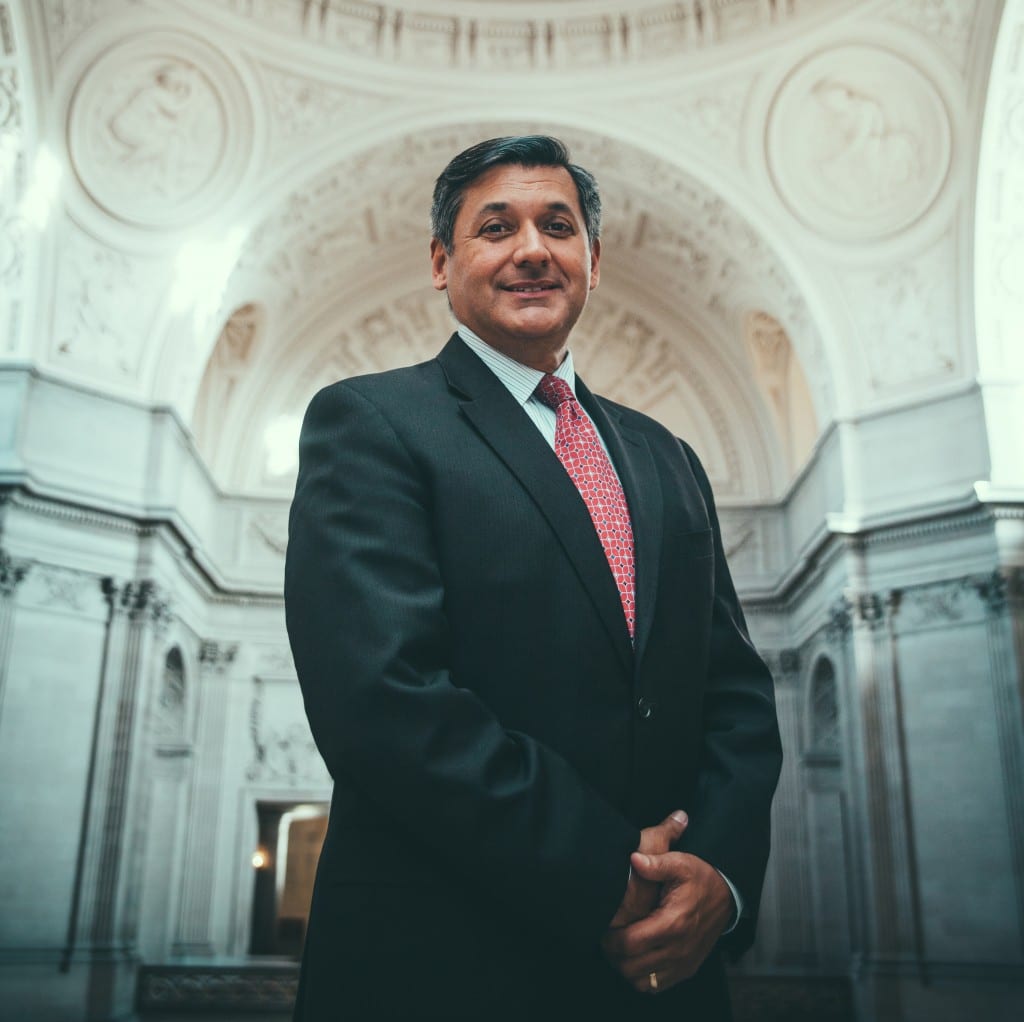 When was the last time you heard a government entity referred to as a laboratory of innovation?

Treasurer José Cisneros shares the innovative role the municipal government is playing, and why certain programs are necessary to help build an inclusive city.

The former San Francisco mayor Gavin Newsom asked the Office of Financial Empowerment (which is part of the Office of the Treasurer and Tax Collector) to run a tax-credit program for working families.

The objective was to provide a small cash match to families so that they would file for their own income tax credit.

In running this program, the office was faced with a problem – many residents did not have checking accounts. Many of these low-wage and low-income families used check cashers that took exorbitant fees for their services.

Providing these families bank accounts became a larger issue than the tax-credit program. In 2006, the city spearheaded Bank on San Francisco to address the problem.

Bank on San Francisco is one of the programs coming out of the SFOFE that is now a model across the nation – the other is Kindergarten to College (KtoC).

The Washington University in St. Louis [i] reports that children with a savings account with their name on it, regardless of how much money is in the account, are six times more likely to attend college.

San Francisco launched the Kindergarten to College program in 2010. Today, every child entering kindergarten in the San Francisco Unified School District receives a college savings account with an initial $50. Families are motivated to consistently save for their children. Equally important is that the program is coupled with financial education in the schools.

KtoC is an example of cross-sector collaboration: the City and County of San Francisco, the San Francisco Unified School District, Citibank, and private support.

To provide the program’s stability, the city led the efforts and makes a $650,000 annual investment. Funds from foundations and individual donors support the matches and incentives for families to save.

The interview with José Cisneros, Treasurer of the City and County of San Francisco, follows.

An article based on the interview was previously published in Impact X, May 2015.

Could you speak to what is required to build a successful partnership between private, public, and non profit entities?

We saw folks who didn’t even have a bank account. Something almost all of us take for granted. People who were left with no place to go with their paychecks but these rip-off check cashers who are operating in our state completely legally.

We wanted to partner with financial institutions, for-profit commercial banks, and cooperative, even non profit credit unions. After nine months of negotiating, three quarters of all of the invited parties agreed.

We also learned from previous programs that word of mouth was one of the most effective ways for people to hear a message, understand, and buy into it.

That’s what led us to the need to partner with community groups, non-profits, labor unions, employers, and you name it. And so we tackled the Bank on San Francisco program.

We pulled them all together and said, “Let me just lay out the challenge ahead of us. We have folks that are being harmed. We believe that all together, we can make a difference and help people be more successful, particularly the neediest people in our community. We’re asking your help, and it’s strictly voluntary, we’re not forcing anybody to do this.”

How do you align public sector objectives with a private sector entity?

Well, it’s really interesting. That’s something that can be a challenge for government officials to do. I was a banker for half dozen years. That experience allows me to understand what motivates not only private companies, but also particularly a private company that happens to be a commercial bank.

Understanding their motivation was important to getting their buy-in. It was really interesting in the nine months of negotiation that we had, because while it was easy for them to understand our main point they occasionally would kind of drag their feet or hesitate.

They like to note that there might be some challenges to them doing things. We brought their regulators into the conversation. We had the Federal Reserve Bank in San Francisco in the conversation.

Therefore, when a bank would say, “I’m not sure, or we’re not allowed to do this because our regulators will not be happy with that,” we could then turn to the regulators and say, “Is that a true statement?”

Pretty much every time the regulators would confirm, “No, that’s not a true statement. The bank is perfectly reasonably allowed to accept these forms of ID, do this, and do that.”

It was very important that we come into those conversations with a clear vision, and explain to what it is like to live in an expensive city, like San Francisco, without a bank account.

What’s the foundation for the Laboratory of Innovation?

We soon found one thing that was unique about governments – particularly local governments – we don’t really feel a sense of propriety as much as I think a for-profit company would.

In fact, what we’ve found to be the case is quite the opposite. When other similar governments do something, they might learn something. By mutually sharing both of our programs can get better.

We quickly found that it would be advantageous for us to form a coalition of cities.

How many cities are part of the Cities for Financial Empowerment (CFE) Coalition?

It’s 15 now. It started with six. It’s been slow growing, because we’ve wanted it to be a coalition of cities really seriously engaged in the work. It has been exciting to see how particularly local governments are very open and eager to share.

There was a report on the economic power of local governments, mayors of cities like San Francisco, working on issues together could drive real change globally.

We can start to have conversations that would be much more challenging for any of our cities to have individually.

We now start to meet with regulators in D.C. who are pondering how should we oversee the banking system? What should we, the regulators, say about overdraft fees? We have been noticing that a lot of banks are really growing their revenues from overdraft fees. That doesn’t seem like a healthy thing to us.

We said: “Let me tell you what we’re seeing, you’re sitting up there in D.C., you’re regulating all the banks in the country. We sit here and live here. We see folks in the Tenderloin, the Mission, in shelters. Let me tell you what they’re facing when they get two or three or four overdrafts in a month’s time, $30 – $40 each. It’s not like they wrote huge checks that were reckless.”

And, lo and behold, we found that our voice started to be able to help shape federal policy. Like financial education, financial empowerment, financial access, and financial safety which is so critically important. Particularly to many of the neediest and riskiest households in our country.

We’ve been excited to be able to do that and then we were particularly supportive of the banking system reforms. That happened a few years ago, out of which came the creation of the Consumer Financial Protection Bureau (CFPB). Which we heralded, and we were trumpeted, and is going to be huge benefit now and for years to come for consumers.

Finally, for the first time, I can’t believe it’s taken this long, we finally have a federal, federal regulator who’s going say, “Well, I’m going to look at the safety of mortgages, bank accounts and loan products.”

How do you rally more cities to join you?

We’re actually in the midst of a project right now, Bank on 2.0, administered by CFE Fund, which is a partner organization to the CFE coalition.

We’re close to 100 different Bank on Cities across the country. We partner with really great groups like the National League of Cities and The United States Conference of Mayors.

This type of work is quite politically neutral. Most people regardless of what your political beliefs are agree that people should have access to safe and healthy financial products and financial education.

How about the Kindergarten to College program?

KtoC is so incredibly exciting and inspiring. It resonates again the same way Bank on San Francisco did with so many people.

It’s getting a lot of other cities really excited about it. Some have actually launched.

How expensive is it?

About $650,000 for the City and County of San Francisco’s budget, which is paying all the costs of the program. We raised about $150,000 a year in match money. Then, we probably raised another $100,000 to support outreach and community activities.

Going back to innovation. San Francisco is unique; in some ways it is a responsibility to push the envelope because we are able and allowed to here.

Is this a task for a local government?

We have to make sure that everybody that lives in our city has a chance to be successful, has equal opportunity, and is not getting blocked or excluded in some way.

We’re not cavalier about it, either. We do our research, homework, especially if there’s a cost to it, like there was with Kindergarten to College. We have to go before our city leaders that decide our budget every year.

San Francisco has a lot of successful citizens. Our city benefits from a strong economy. Yet, at the same time, we see our costs of living and the costs of success. We see a growing divide between the haves and the have-nots.

As a government, we have a role. Which is, first and foremost, protect our residents and our consumers.

[i] Washington University: Studies part of growing body of research on assets and their connection to college success, Jessica Martin, April 2011.

Kevin Reimer: 80 Miles p/h on a Skateboard While Building a Company