impactmania > Articles > Suzie Afridi: Comedy is Not a Laughing Matter

Suzie Afridi: Comedy is Not a Laughing Matter
January 24, 2017 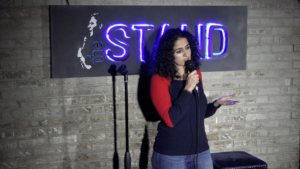 Comedy is Not a Laughing Matter

Suzie Afridi, a former tax accountant fell into a midlife crisis and came out a comedian. If being a female comedian is not challenging enough, Afridi is very publicly processing her personal challenges set in geopolitical Middle Eastern matters.

On December 16th, Afridi will be launching her own comedy show in New York City called Amreeka, which is about the American dream. She is producing, performing, and curating comedians. The first show is already sold out.

What’s it like being a Palestinian girl and a comedian in New York?

If you told me, five years ago, “You’re going to be a comedian,” I would have laughed at you.

I had a midlife crisis and went to the therapist. She said, “You should journal.” I wrote, gave her my journal, and she says, “This is very funny, you should take a workshop!”

I took a humor writing essay workshop. Three weeks after the workshop — this relates back to impactmania, which is ‘you can’t be what you can’t see’ — my husband says, “I have these tickets for this comedy show.” The entire show was by different Arab comedians and this Korean guy who did his entire set in Arabic. He’s famous in the Middle East. His whole set is about growing up looking Korean but being in the Middle East. Two days later, I woke up my husband in the middle of the night and said, “I want to do comedy!”

Suzie, you were in finance before all of this?

Did you realize you were in the wrong line of work?

Yeah, growing up, I had opinions and humorous ideas. Palestinians are paranoid. We think the Mossad and the CIA are spying on us. An Arab’s biggest fear is to go to jail, even Christian Arabs. We were told that everybody’s spying on us. This is not like conspiracy theory paranoia. No, no, no, it’s probably happened to people.

We’re told be quiet, don’t talk. Anything you say might sound anti-Semitic, even if you’re fighting for justice. The fact that I’m Palestinian and can trace my family back 500 years doesn’t matter. If I say that in front of a Zionist, he might say, “No you’re not Palestinian, you’re visiting from Jordan.” Their narrative is that we never existed. I am not trying to take my land back; I just want a sitcom.

Simply existing was anti-Semitic. We were told so many times, “Don’t talk and don’t go to political rallies.” We were dissuaded from expressing or even thinking.

As immigrants to the U.S., you’re told to go for a safe job, like accounting, lawyer, doctor, whatever. I did tax planning and accounting. I liked it but I wasn’t good at it. If I find my reviews from my manager, I am sure they say that I took nonstop chai breaks. [Laughs.]

How did your family respond to the career change?

My oldest brother called and said, “It makes so much sense that you ended up a comedian ‘cause you were so funny. He reminded me of this story:

Terror was like a fact of life for us. It’s small talk, “Did you hear about the suicide bomber?” It was like talking about the weather, it’s just normal. I was 9 -10 years old. The house next door to us was demolished. The only thing left was a nice sofa set out in the open air. We didn’t have toys as kids. I said to my sisters, “Let’s go and do a tea party on this sofa set.” We went with the neighbor’s kids and played there in the middle of Jericho.

You think now, there was war, injustice, oppression, and colonialism. It’s crazy that all of these big themes were a part of our childhood. I observed, “Okay, the Israelis don’t like our architecture, but they love our sofa sets!”

You grew up as a Christian girl in a Muslim community.

Yeah, we were a minority. Two years ago, a friend invited me to a synagogue. The rabbi said, “Our values are to educate, celebrate, and remember.” I went home and was thinking, “My God, we grew up on guilt, shame, and blame.”

Everything that motivated us was done through guilt, shame and blame. Growing up as a Christian in a Muslim country that was occupied by Jewish people was a lot to process.

For breakfast we were fed Jewish conspiracy theories, and for lunch we had a healthy dose of Islamophobic horror stories. The arch to any story was: “You will not marry a Muslim!”

Imagine how scared I was when I fell in love with a Muslim. They tell us all these horror stories. In the ‘80s there were all these stories on the media about Muslims. If you marry a Muslim, he will steal your kids. You realize that a lot of these narratives on TV are because America is like a high functioning person, but it’s got a war addiction.

They go to the Middle East, bomb the hell out of it, but they have to justify that. On TV, they present this horrible Muslim, who slipped into our culture. We were taught to hate them.

We, at school, were taught Arab history from the Islamic era from 800 years ago. We were told they were great people with a rich culture, and then you come to America and you’re like, “Wait a minute — we are known for terror?”

Is must have been unusual to have such a free upbringing in the Middle East?

Very unusual — I realize now that my dad was a feminist. We walked around in bathing suits. If anybody said something to him, he’d say, “These are my daughters. You have to control your sexuality. I don’t give a shit what you’re thinking, if you’re thinking sexual things, that’s your problem. These are innocent little girls and they’re going to walk around in bathing suits.”

You have done the rounds in New York clubs. How many women comedians are there?

When I got in the business, I was like, “Okay, I’m going to change the narrative because it’s wrong. I meet so many Arabs and Muslims who are sensitive and conflicted people with normal issues.”

I wanted to bring Arabs into the living room and show how funny they are. We worry about the basic things, like health insurance, education, and housing too!

Two years into it, I was, “Okay, fuck the narrative.” I saw this documentary by Jennifer Siebel Newsom called Miss Representation. It says that 95 percent of what’s on TV is written by men. Women do not write the women roles on TV, they’re written by men. Women are sexualized; there isn’t a nuanced dialogue. Two years into it, I realized I have to fight as a woman, forget being a colored woman. I have to get myself heard as a woman. There are so few women in comedy.

It is very, very hard for a woman. You have to work harder to prove yourself. I got so tired of bringing my people and giving my business to bad comedians. Old-fashioned, second-hand car salesmen type control a lot of comedy. They’re cheesy, they hit on you, and they make it harder for women. So I’m doing my own show.

Comedy is no laughing matter.

It’s no laughing matter. That’s the irony of comedy; you have to be a very serious person to do comedy.

Is there an ongoing pressure from people you run into who expect you to be funny all the time?

Yeah, my doorman, every single day, “Tell me a joke.” I tell him, “You’ve got to come, pay money, and get a two-drink minimum.” [Laughs.]

I was one of ten comedians and had six minutes at The Stand, which is my favorite comedy club. One guy heard my settlement joke about my thighs. He said, “I am Israeli, and I served in the army. But you make me want to have Palestinian friends! We need to support Muslims or Arabs who use their words.” These statements drive my husband and I to have the goal to bridge gaps.

In a blog post, you discuss the problems of the Arab boy.

Something went wrong with the post 1967 generation. In ‘67, there was a war, and occupation after that. We lost. It was a defeat. But the Arab mindset — we victimized ourselves. Everything about us is fatalist. If you say, “Shall we meet tomorrow?” Inshallah — if God wills it. There is no individual will.

I’m glad you showed up today!

Tell me about some of the Arab boy problems.

Every time I talk to a female Arab friend, I ask, “Do you have a loser brother?” Every family has one loser son. There’s something wrong with the way we parent boys.

There are four factors that lead to terror: male macho culture, Arab sectarianism, the politicization of Islam by the CIA, and hate preaching imams.

If you’re a kid who is disenfranchised from society and you’re hearing at home that you’re the man, and you go to a mosque and you’re told to hate everyone, and you have a lack of healthy role models, what direction are you heading?

People were saying Obama was a Muslim, I wish he was! Because then you could tell these kids, “Here is a Muslim, put his poster in your room, and aspire to be the leader of the free world through your words!”

What has comedy taught you?

It is exhilarating and educational; I learned so much about myself. But there have been times, those dark night of the soul moments…I was in the grip of depression, and thinking, “How can I do this?”

You write, memorize, bring people, and perform. Comedy is tragedy plus time, right? When tragedy happens to you, the more you shrink that time, the sooner you can laugh at yourself. My whole wedding drama to a Muslim took a full ten years before we could laugh at the whole thing, ‘cause it was so traumatic. Now, if something happens to me, I fall in the street, I laugh right there and then.

It’s hard, because you’re not getting paid. I’m so lucky that I have this amazing, supportive husband.

You married the right person after all!

Yeah, he’s amazing. He helps me so much. You need a feminist husband. As a Muslim woman, there’s so much going against us. The least you can do is marry a guy telling you that you were born to do big things.