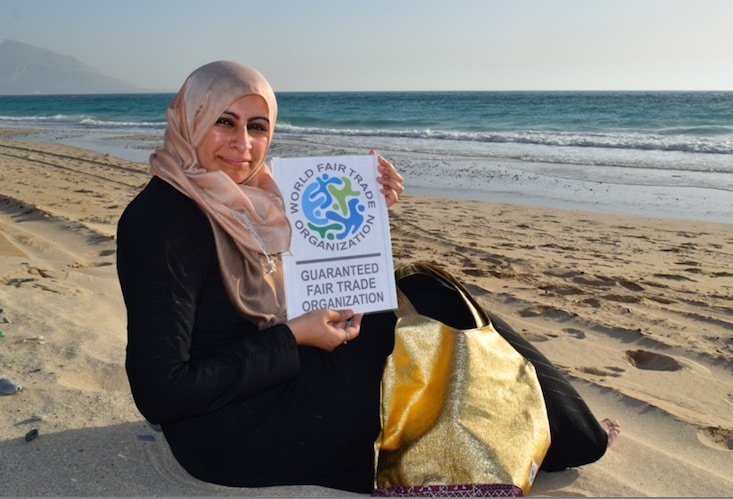 Sabeena Ahmed, a native of Pakistan, went from teaching English to refugees in England to founding The Little Fair Trade Shop in Dubai, in the United Arab Emirates (UAE). She spoke with impactmania about how boredom led to a course in banking and Fair Trade. Sabeena also shares a simple step you can take to support others, even when you are out grocery shopping.

You started The Little Fair Trade Store at the Dubai flea market in 2008.

I was recovering from an operation.

Recovering from an operation was not consuming enough!

[Laughs.] It wasn’t, believe you me, I was so bored. I thought, what could I do now? I decided to study banking and insurance. That’s what you do when you’re bored, you start some finance course, right? [Laughs.] It changed my life. The last assignment read, “Islam promotes equal distribution of wealth.” I was blown away. I kept asking, “Islam really promotes equal distribution of wealth?”

I’m now living in the UAE and thinking, how could people support the most deprived? I don’t want to give them charity; I want them to help themselves. I did research and came across the World Fair Trade Organization website. That was an epiphany. I contacted them and said, “There’s no Fair Trade here in the UAE. Would you mind if I started something?” They said, “Go ahead!”

Is there any interest in Fair Trade products in the Middle East?

I’m an individual associate member to the World Fair Trade Organization. I visited Fair Trade Egypt. Last year, I visited Fair Trade Lebanon. I went to the British Council representative in London and she put me in touch with a lady who was working to raise Fair Trade awareness among school children in Qatar. When teachers are teaching English, they may use a lesson plan to talk about Fair Trade. There is also a woman who is an active member of the movement, promoting Fair trade producers in Kuwait.

It seems there are only a few individuals in each countries. People are still unfamiliar with responsibly sourced goods, right?

Absolutely, absolutely, I was shocked to even find the lady in Kuwait. I do get people emailing me around the region. I have had no emails from Bahrain or Saudi Arabia or Oman. These countries are not familiar with the Fair Trade movement, what it means, and how they can become involved.

How is Fair Trade seen in the United Arab Emirates?

Would you say that most of your customers are expats?

Yes, GCC [Gulf Cooperation Council: political and economic union consisting of all Arab states of the Persian Gulf, except for Iraq. Its member states are Bahrain, Kuwait, Oman, Qatar, Saudi Arabia, and the United Arab Emirates] customers come and visit, but the majority are expats and tourists.

How did you source the different artisans all the way from Chile to South Africa?

I used to do research on the Internet and would write to organizations and people would send me emails. Fair Trade Egypt was the first Fair Trade group and movement to support me here in Dubai. I have to say a huge thank you to Mona El Sayed, the Director of Fair Trade Egypt. I’m so grateful to her because she believed in me from the beginning when everybody said, “No”. She said, “Sabeena, take our products and give us feedback.”

What has been a surprising learning since starting The Little Fair Trade Shop?

Everything in life is a learning curve and I’m blessed for this journey so far. I’m grateful to everybody who’s supported me. I’ve had so many failures; I’ve lost money on products I haven’t sold.

What was not a big seller?

Gosh, I used to buy these gorgeous clutches made from food packages. I really thought that they would do well here. I invested a lot of money and I didn’t sell very many, but I still believe in the group. Then there was another product that I purchased; this is very dear to me because it supports breast cancer research.

My mother passed away from metastatic breast cancer last year. For the past five years my life has been a blur, because I’ve been in traveling to Manchester [UK] every couple of months. I didn’t know anybody with terminal cancer. When you see your parent, especially a healthy independent woman — who’s nurtured you, given you everything that’s the best in this world — when you see that person withering away, it has an impact on you for the rest of your life.

This Fair Trade work is all about supporting what my parents believed in: giving people opportunities, especially people who have nothing.

The breast cancer campaign bag is a pink bundle bag made by Fair Trade artisans in Nepal. That product is very dear to me, because all the money goes to The Christie hospital in Manchester, where my mom had chemotherapy. 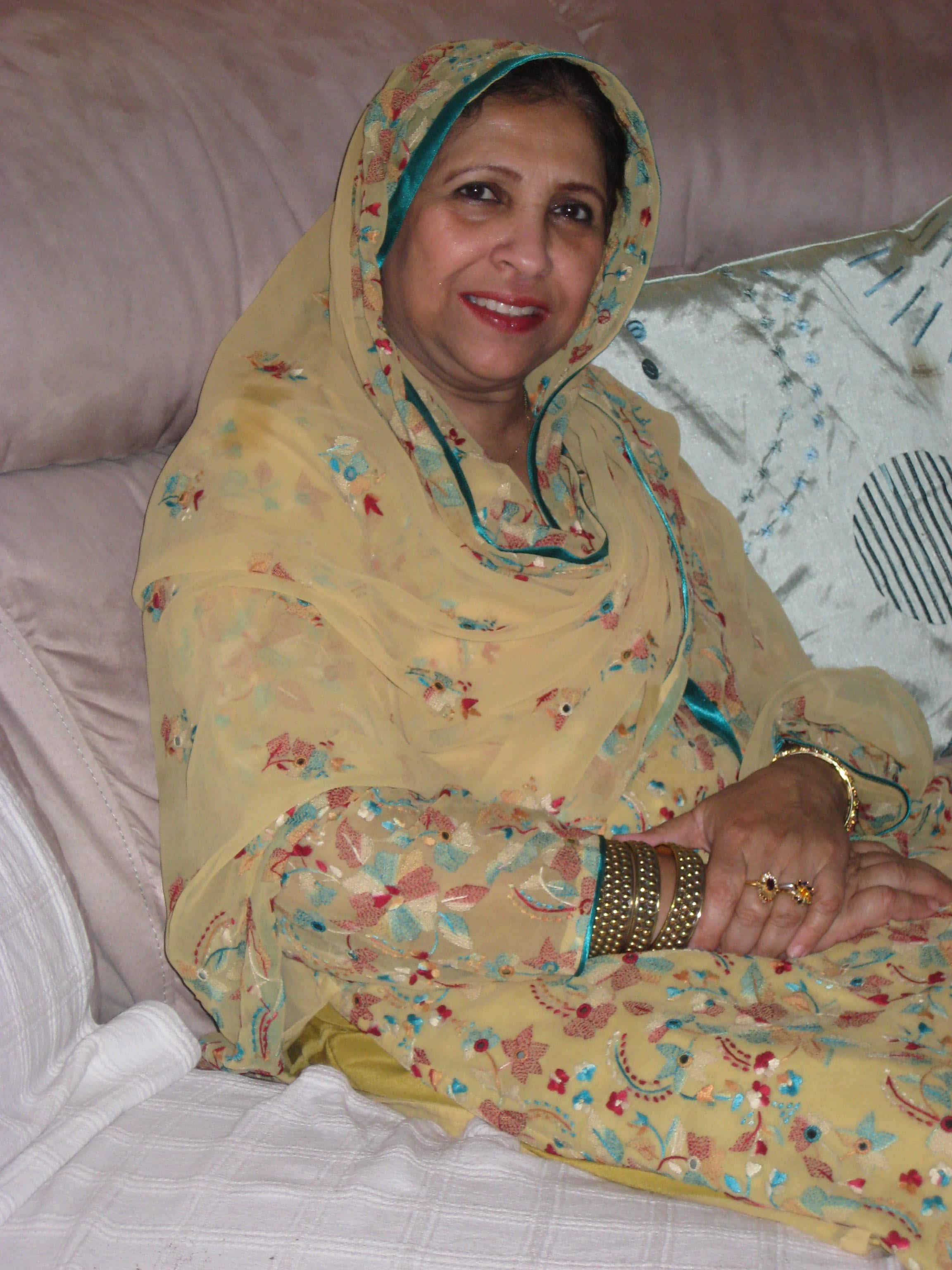 What did your mother say when you started The Little Fair Trade Shop in Dubai?

My biggest success was that I convinced my mum to purchase Fair Trade sugar, Fair Trade tea, Fair Trade bananas, and Fair Trade chocolate! [Laughs.] Whenever we’d Skype, she’d say, “Sabeena, I went to the market and bought fair trade bananas!” So my mum supported the whole concept of Fair Trade and the support of trade families.

What are some easy things that people could do to incorporate Fair Trade in their everyday lives?

If you drink coffee, support female coffee growers such as Equal Exchange. If you can’t find that in America, one of the biggest is Tradecraft, they’ve been around since 1979. They’re one of the largest Christian Fair Trade organizations. One of my favorite brands is Dark Woods Coffee; they’re a new company. They aren’t Fair Trade certified yet, but they support Fair Trade farmers in Kenya, Uganda, and Democratic Republic of Congo.

Please support these coffee growers; they struggle to survive, because of the conditions in the market. Coffee prices have decreased so much, same for chocolate, cotton, and bananas. When we go out shopping, we need to think, “Who grew this for me?”

Sabeena, you said in an interview that your husband is your greatest supporter. Could you give me an example of how he supports you with The Little Fair Trade Shop?

When I first became interested in Fair Trade, I did a bit of research on the Internet and said to my husband, “There is great place called Fair Trade Egypt in Cairo…you love going to the pyramids. At the same time, we can support the artisans in Egypt.” He said, “Let’s go!”

When we got to a very small showroom, we saw a beautiful butterfly bag made by two women’s groups in Cairo. My husband, Faisal picked it up and said to the gentleman, “What’s the story behind this bag?”

The man said, “Well, it’s made by garbage pickers. They find materials while collecting garbage. They use macramé, which is traditional to Cairo in Egypt. They produce these bags with the butterfly logo as a supplement to their income.” We were just completely overwhelmed with emotion. 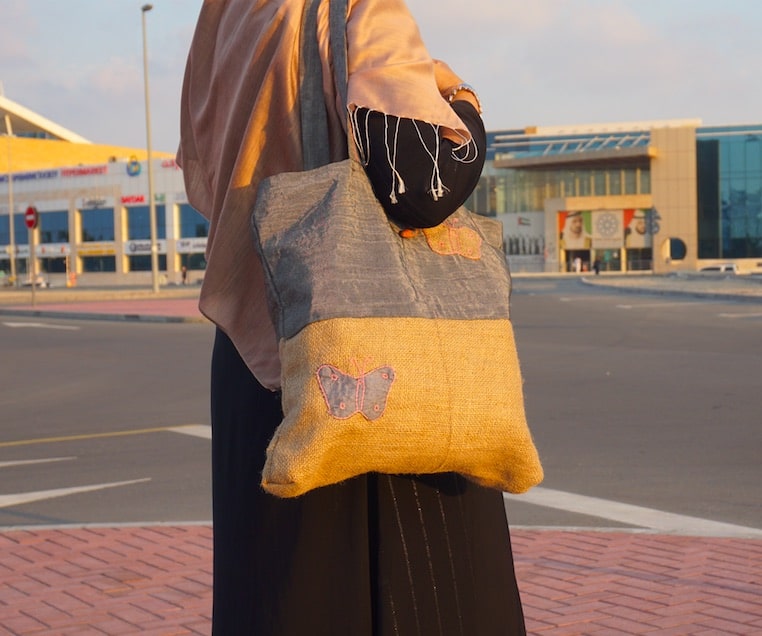 The Butterfly Bag made with recycled materials by women garbage pickers to supplement their incomes.

I said, “Faisal, can we buy more products, because I’d really love to support more artisans.” And Faisal said, “Of course, this is what you do.” If it weren’t for my husband, I wouldn’t be where I am today. He believes completely in what I do.

He’s a financial controller, hotelier, and a fine arts man. He talks numbers and figures, profit and loss all the time. But he’s so committed supporting the Fair Trade movement. I’m so blessed to have him by my side. Many husbands would probably say, “Why do I need to pay for your trips?”

Because of how passionate and how committed I am to raising awareness, he says, “Sabeena, don’t worry, if you want to go visit, if you want to interview artisans, go for it.” 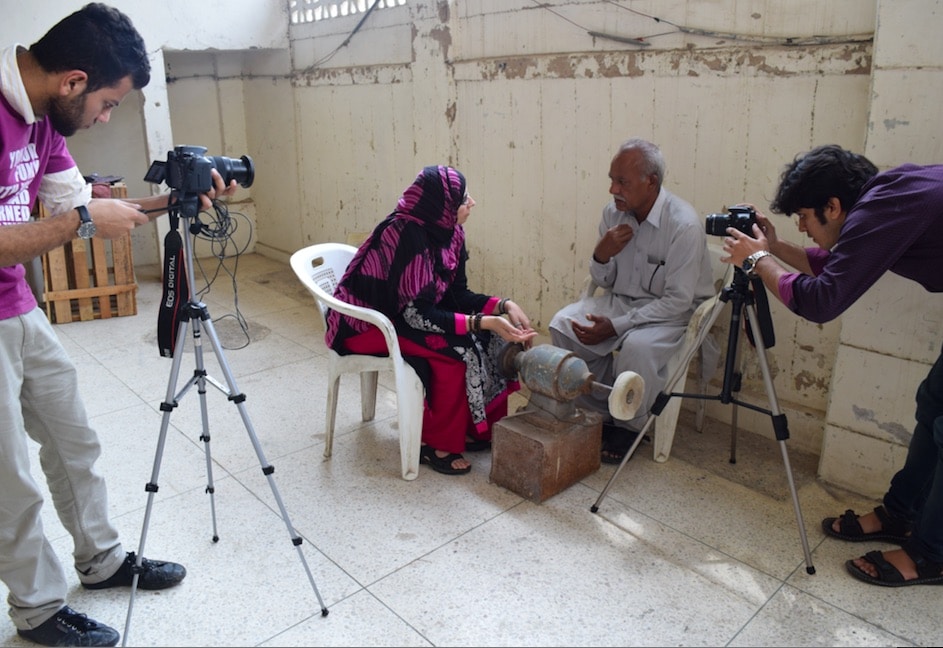 You’ve got to make the change within yourself, then change the way that you shop, and try to support and empower disadvantaged people. Be at the forefront of campaigning and act as the voice of the voiceless.

What can women do to support other women in general?

It about thinking about what you need as a person. Most of us have a roof over our heads and we have food on our plates. We have to stop thinking about us — nowadays is all about “me”.

Maybe start thinking about your extended family first, who may need help. If there are people in your family, if you know somebody in the community who is struggling, reach out to them. It is not about money, it’s about relationships. People crave to be with one another, they crave interaction, especially now.

Reach out to the nonprofit organizations in your community; support them as much as you can. Devote your time, energy, and your skills. Transferring those skills to other people and then talking about Fair Trade producers. When you go out shopping, try to figure out who made the products.

Especially, fast fashion is horrendous — so much fashion lands up on landfills. It is appalling how the fashion industry treats people who work in the factories in Bangladesh for example. Do you really need another new pair of jeans? Who made them? Ask questions about the workers, are they being exploited? Are they being given a fair wage? What conditions are they working in? Are they exposed to chemicals? It all comes down to educating ourselves about our choices.