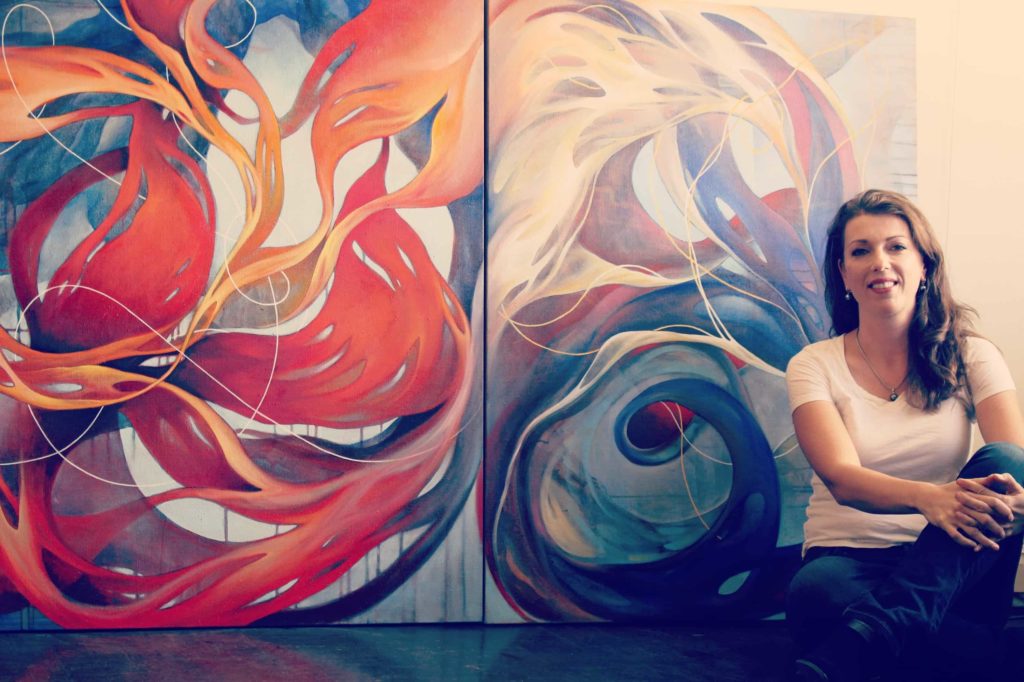 Masha Keating opens her show Gaia’s Path at galerie102 in Ojai, California from January 23 until February 28, 2016. Impactmania visited Masha’s art studio in Santa Barbara, California, where she spoke about her impact maker and showed us one of the pieces for the show.

Tell me a little bit about the work you have made for this coming exhibition.

Normally, I explore organic shapes and images in nature. I would start with an idea and see where it would take me. In this new show I’ve started to introduce some figure and some narrative element to the paintings. There’s a lot of feminine ideas and fertility in the work.

It just showed up on my canvas. I recognize it as what I was, then I recognized why it came up.

When you started in art school, what kind of themes were you drawn to?

I was mainly concerned with rendering the figure as accurately as possible. Since then, I’ve really branched out to  more conceptual realm, and trying to take more risks. I think life changes you, so your art changes with you.

Tell me about your studio.

I make sure that I’m here twice a week. I’m very religious about it. I don’t make appointments; I don’t meet friends for lunch. The real trick is that you don’t wait for inspiration to hit you. You have to show up and start working. I feel like it applies to so many areas in people’s lives and especially in creativity.

A lot of artists don’t have the luxury of picking up a brush when they feel inspired in the middle of the night. You have to hope that it will stay with you when you’re finally show up in the studio.

Walk me through the process.

With my abstract pieces, I have a new process that I’ve discovered that I really enjoy: I work on many pieces at once. Individually and they have their own composition and their own idea. Then I combine them and see which pieces work with each other. Instead of thinking of them as a diptych or triptych, I think of them as a one piece. I put them next to each other so they become one painting.

When you put the two pieces together it creates a new composition. It’s almost like finding partners for the paintings. It was a happy accident. I put two paintings next to one another and I realized that there really enhance each other and make everything so much more interesting. That’s when I realized I should pursue this process.

Was it really because of lack of space that you put them next to each other?

Yes, it was due to lack of space!

Some artists respond to the world with their work. Is yours?

Painter Tom Wudl has been a big part of my art life. The way he sees art is big. I always try to remember it because he wants to make sure people stay true to themselves.

It’s very easy to get caught up and, wanting to sell your work, make it marketable, or make it palatable for people. Make it nicer, make it less attractive depending on what the market requires. Then you lose the reason why you started painting in the first place.

Basically, you are doing it for yourself because you enjoy having something to express. I feel like when I get that accomplished, I already got the benefit out of the painting. If it gets sold, or I get recognition for it or compliments, that’s just extra. I’m happy with satisfying my own expectations of the work.

Did you struggle with that?

Yes, yes, at first I needed to prove something to myself. So I started to approach galleries, and was trying to get as many shows as possible. I spent a year or two, really busy and in a bad mood, stressed out. My family suffered, I suffered, and my work suffered.

I learned that it’s better to be minimal. Do one thing but do it well. If you have time just for one gallery to represent you instead of three, then that’s what you got to do.

What is another lesson?

Tom Wudl believes that there’s this creative force that flows through the universe and we’re all a part of it. Everyone is an artist whether they recognize it or not. It’s important to nurse that.

The most important thing is that you need to really stop the critical voices in your head. “Will someone think it’s good?”