Design with Cultural, Social, and Economic Impact – A Conversation at PNCA
January 9, 2018 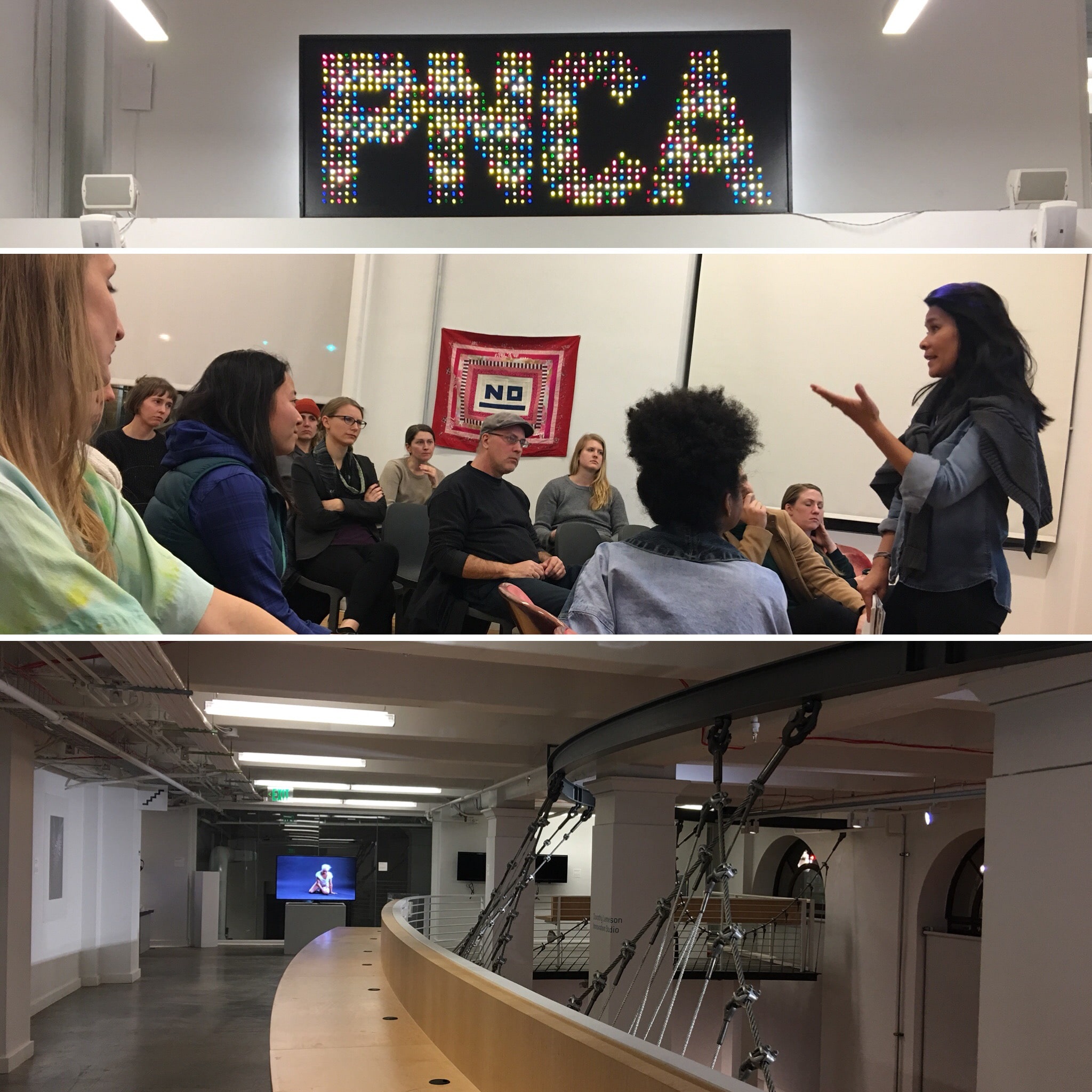 Paksy shared what she learned from interviewing close to 300 activist-investors, social entrepreneurs, award-wining designers, and other movement makers in 22 months. She touched on the future of work; how robots/AI have nothing on your emotions & creativity (yet!); and why she expects PNCA students to be the next impact makers.

Please find below the slides and speaker notes of the talk. Attendees comments were not captured.

Thank you to hosts Chair MFA program Peter Schoonmaker; Adjunct Professor and esteemed colleague at impactmania, Jody Turner; and Meghann for organizing everything.

I’d like to share a few examples of products/services with cultural, social, economic impact. Impact can be driven by a company in how they treat their employees to delivering an actual product that addresses a societal issue.

Then, Jody and I would love your contribution to a large social project we are collaborating on. Before we get to that, first some questions for you:

Who here are PNCA students? Alum? Then others are lifelong learners? I am a lifelong learner, so thank you for making time to be here. You’ll see why that is important in a few minutes.
Anyone studying/working abroad after this?
Who is here because you are afraid robots will be taking over your job?

BECAUSE ALL WE READ IS THIS:

The World is at a Tipping Point of Change

The World Economic Forum reports that three years from now, over 35% of skills that are considered important in today’s workforce will have changed.

The Guardian newspaper reported that by 2036, 85% of jobs don’t exist now and 47% of today’s jobs will be exposed to automation.

Initially, I found these numbers alarming. Now I look at these and am excited. These numbers also mean there will be many new opportunities. We’ll need Chief Productivity Officers, drone managers, nano-medics, robot-counselors (matching people w/ robots), 3D body part makers. Apart from wealth mangers, you will also have crypto-currency managers. One of my favorites: nostaligst, someone who recreates familiar living places for the elderly. There have been pilots in senior homes in the Netherlands and it has shown that people with Alzheimer reengage with family members in a recreated setting that reminds them of their old home. Talking about design with impact!

How do you prepare for the future of work impacted by a continuous stream of disruptive technologies? I asked MacArthur Fellow educator and founder of a STEAM (science, technology, engineering, art, and math) Academy, Amir Abo-Shaeer. He answered: “By working on open-ended projects.”Abo-Shaeer went on to speak at the White House about education. Interviewing more than 300 impact makers in the last 22 months, I have heard: Be flexible. Collaborate. Stay curious. And here it is: be a lifelong learner!

BECAUSE WE ALSO READ THIS:
“We need Artists, Designers, Chefs, Musicians, and Writers more than ever.” 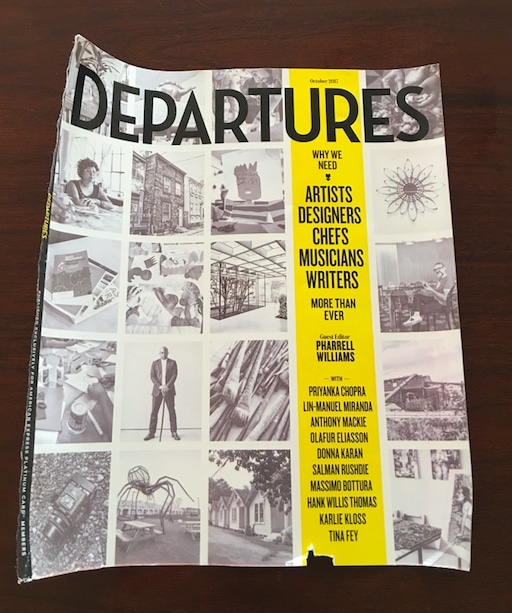 So what skills do you need, because we just found out that the 35% of your skills today are irrelevant? Here is the World Economic Forum research: What are the top 10 skills you need as a human being to be successful?

These are all things that a computer is not too great at yet. 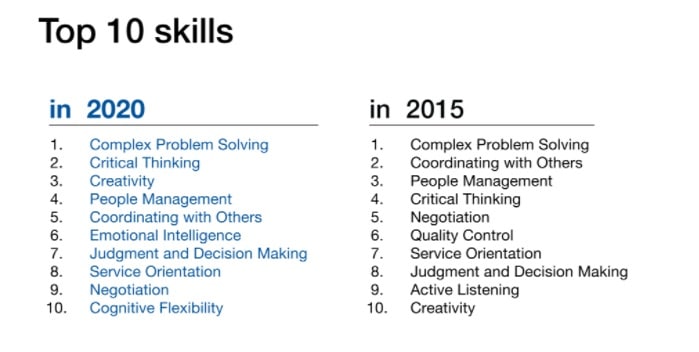 According to an award-winning Dutch designer Daan Roosegaarde who we interviewed two years ago: “Going to a museum might not be a hobby anymore, but you might go to be triggered in a way, which makes you different than a computer. The world might be witnessing a renaissance of arts and culture.”

THREE EXAMPLES OF DESIGN WITH IMPACT

Robots/AI have nothing on us yet. Humans are unique, have their quirks, emotions, and creativity. Humans develop relationships with others that drive cultural, social, and economic impact.

While I was going around interviewing artists, designers, entrepreneurs, scientists, and other rebel rousers, I was invited to co-produce and direct a short video about a large social enterprise in India. After researching and interviewing many social enterprises, I actually got to see a company with cultural, social, and economic impact at scale.

I won’t give you Death by Powerpoint, but I’ll show you a few examples of design w/ positive impact. This can range from a social enterprise (for-profit & for-purpose entity) or a product/service design that make people adjust/alter their behavior.

Here is a handwoven rug by Jaipur Rugs. It won the German Design Award. Would it look like this if a machine made it? 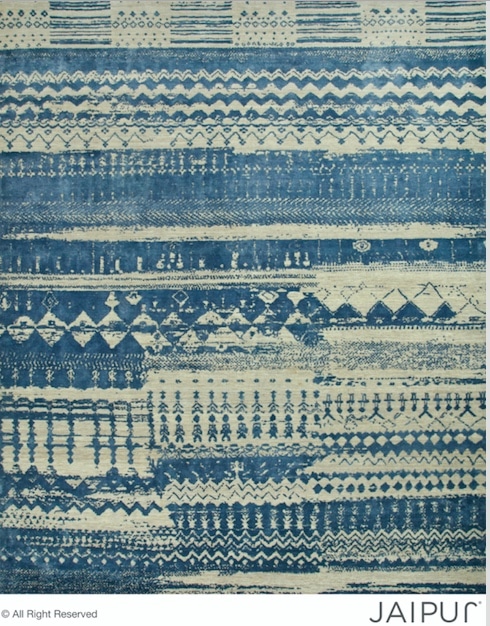 Anthar means Differences in Hindi. The Jaipur Rugs was designed and woven by women from the grassroots and won a German Design Award. Photo Courtesy of Jaipur Rugs.

Three women in a small town in India were given wool and a loom and asked to come up with a pattern for a rug and weave it. This was the result. The design of the rug tells you that the three didn’t agree on the pattern. It looks like they didn’t even particularly cared for one another.

The rug’s name is Anthar. It means differences in Hindi. You can see that it took weeks for them to gel and in the end there is (somewhat of) a resolution.

This could only come from a company that is working with the grassroots. The founder of the company, NK Chaudhary, started working with 9 people from the untouchable class in India and subsequently shunned by his own family. Today, 40 years later, the company is working with 40,000 people across 600 villages in India. They recently started to ask their weavers to come up with their own designs.
In addition, the Indian government has realized that these “uneducated” rural women have skills and experiences that support the Indian economy. Therefore, in collaboration the two entities are now recognizing and certifying the artisans. With this comes not only acknowledgment, but also health benefits and education. For more, see impactmania’s 4 min. video story on the company. 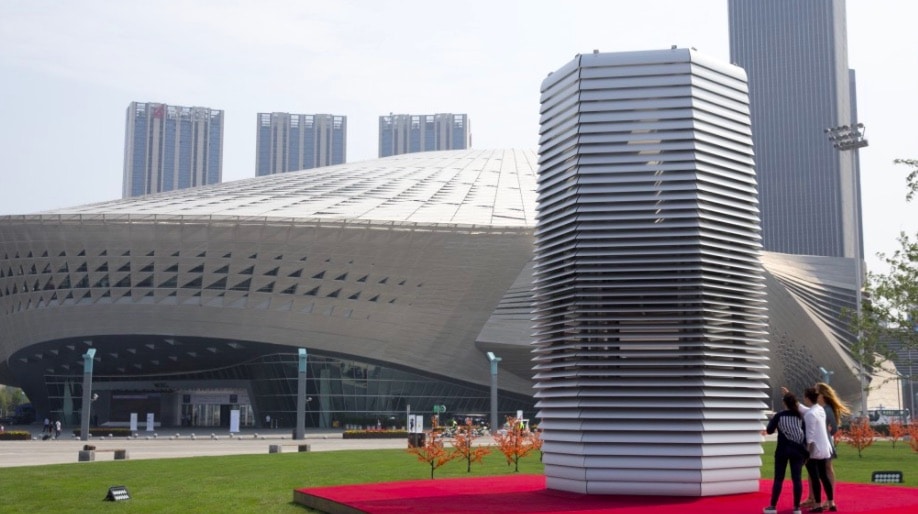 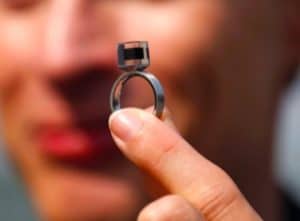 The Smog Tower and Smog Ring by designer and innovator Daan Roosegaarde. This beautifully designed tower sucks in polluted air, it has been touring China extensively, and they use the carbon to make rings. It is not going to miraculously solve all the pollution in China, but it is creating awareness and offers a smart way to get people involved. This has spurred a number of other innovators, organizations, and companies to support the efforts.

A great example of cultural, social, environmental, and economic impact. 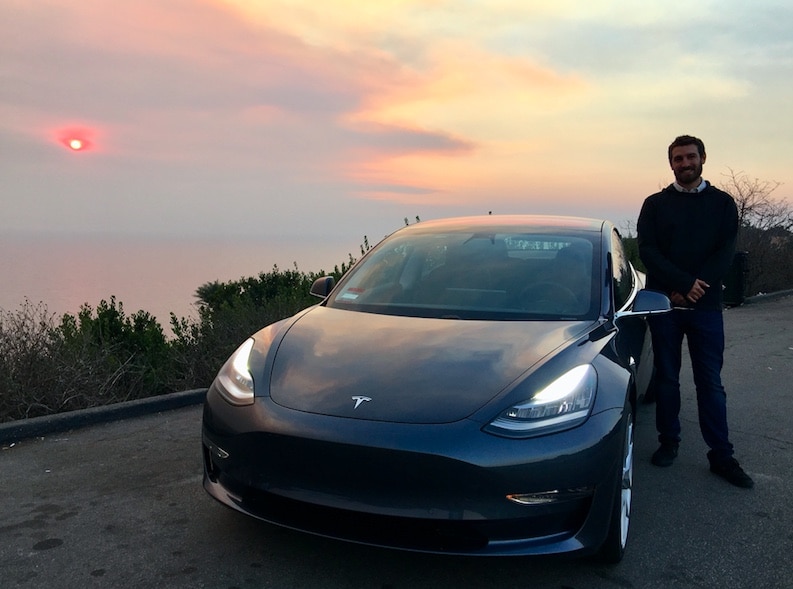 Michael O’Boyle and one of the first 300 Tesla 3. Photo by impactmania.

And of course, the holy grail of design that has enormous cultural, social, environmental, economic impact: Tesla. This is Michael, one of the Tesla’s employees who received one of the first 300 Tesla 3. We all know the electric car is taking over, but what I found remarkable is that this car will make your money. While you are in your co-working space, the car is outside driving people in the near future. The car is already equipped with 9 cameras, one of which is inside the autonomous car. That camera can keep an eye on who is in your car and if he/she is a good passenger.

There are countless of examples. Once you start looking for design w/ impact, you’ll also start seeing other brands designing stuff for more emptiness. The fancy designs, but empty products’ only objective is getting into your Apple Pay (or wallet!).

You are here to help design solutions for the world — you will become the next wave of impact makers. Because these hundreds of people I interviewed were where you are a few years ago. The more I spoke with people such as a 9-time Grammy Award winner, Ambassador, and Nobel Peace Prize Nominee, the more I realized we all are the same. We struggle with the same questions in life.

HOW TO BECOME AN IMPACT MAKER?
In short, this is what we learned from the people we interviewed:

Master your talent, expose yourself to what forms your trade. I heard most often during interviews: “I learned by doing.” I urge everyone to spend time in other parts of the world. At least spend some time in another part of this amazing country, if possible as a (short-term) resident. Find your unique value proposition, what sets you apart from the designer who is seated next to you?

TRIBE (for lack of better word, but don’t be tribal!)

Or that business term called networking. I use tribe here, it sounds more soulful, but don’t be tribal, which would actually set you off on the opposite direction. You need a core team you can trust and rely on: people who have your back. A group of people that is less transactional — more relational. Especially those who are masters in their fields, try to connect with people who are not like you, don’t think like you — older, younger, mix of social-economic background. Yes, even those with different religious backgrounds. Spend time with your tribe, work with your tribe, and most importantly support your tribe.

You will have to put in your time. There is no get-rich/famous/successful — fill in the blanks — scheme. You get up, do your work, and repeat. You will have to take calculated risks, you will have to listen, but also learn to ignore voices: the one in your head, the one from your parents who are anxious you will move back home or worse, the ones who would rather you move back home. Ignore voices from random disengaged people who are jealous, bitter, negative, you name it. Put in the hours. And even then, there is no guarantee. But you will be exposed to ideas, people, options, and therefore creating opportunities for yourself. You will figure out why you are here.

INVITATION TO COLLABORATE ON WOMEN OF IMPACT PROJECT

My own personal example of how you get exposed to opportunities when you are working on an open ended project, staying flexible, and (here it is again) being a lifelong learner:

That video story I was invited to co-produce and direct in India subsequently was featured at the United Nations Global Compact Conference 2017 and led me to attend the UN General Assembly week where a special UN – EU initiative was launched to eliminate gender violence.

This was especially timely, because our current project at impactmania is 125 Women of Impact. We are covering women in different fields in different countries. From an activist-artist, ambassador, U.S Presidential Award winner for her work in STEM, a Grammy winner, to a World Champion Boxer. Because Marian Wright Edelman said it right, “You Can’t Be What You Can’t See.” 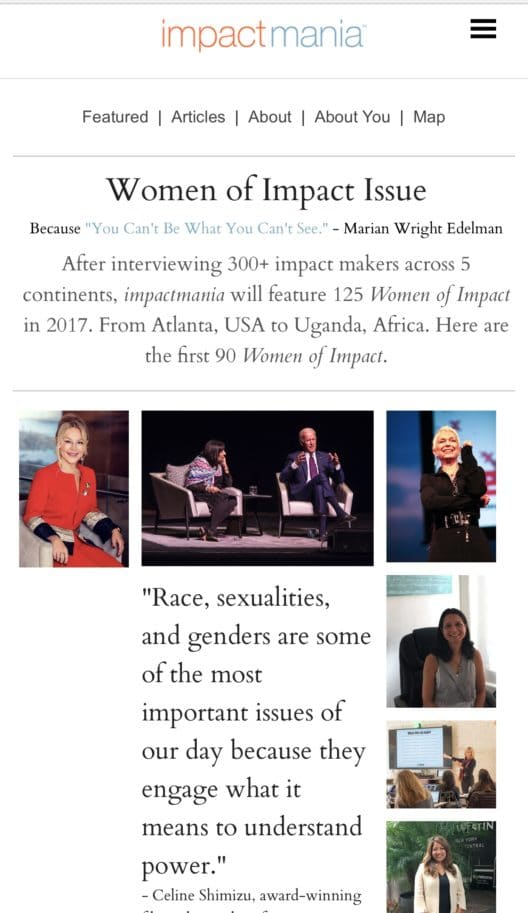 In 22 months, impactmania interviewed more than 120 Women of Impact from 30 cities.

Women of Impact will be launched on July 19th, 2018 at AD&A Museum, University of California, Santa Barbara (UCSB). On the 170th Anniversary of Seneca Falls Convention, the first women’s right convention in the United States.

We can debate how far (or not) we have come, but we will be remembering, launching Women of Impact, and celebrating by interviewing a special guest live at the AD&A Museum, UCSB. After the launch, Women of Impact will travel similarly to how the women’s convention at Seneca Falls sparked conversations elsewhere in the country.

Here you have a proposal that takes minimal time, where you show your talent, and start building your tribe as we talked about. I’d love for you to interview one Woman of Impact. It involves researching someone in a field you are passionate about who is driving cultural, social, or economic impact; connect with and interview this person. Please email [email protected] for more information.