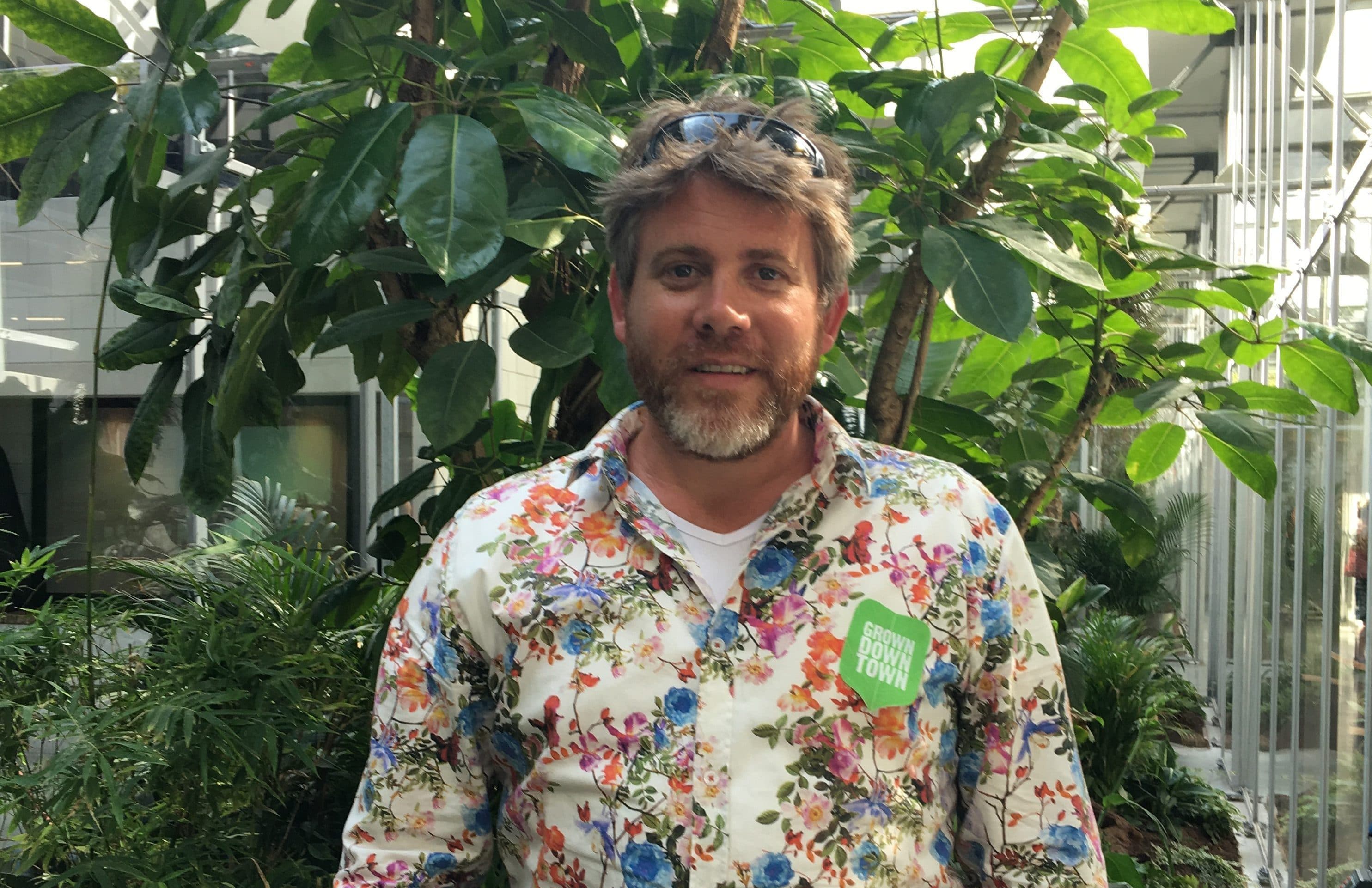 Philip Van Traa, founder of GrownDownTown, has been transforming the rooftops of a number of commercial buildings in Amsterdam into gardens.

He collaborated with Master Chef Chris Naylor, of the Michelin-starred restaurant Vermeer in Amsterdam, to develop Rooffood, a year-round, higher-yielding roof garden for the restaurant. There he has also introduced the concept of roof crates that are efficiently managed by the GrownDownTown team.

GrownDownTown has also built upon the roof of one of the largest start-up ecosystem B. Amsterdam, as well as hotels.

The roof of every city, when you look from above, is all black and unused. When you want to make a city greener and more sustainable and more resilient, then you need to look to the big open space, and that’s the roof.

Is there a downside to being up this high?

When the sun is there, it’s really there. There’s no shade, and it can be quite windy. But it’s also because of it — that it’s windy — it’s cooler.

Plants don’t get as large as on the ground floor. You get two meters tops. The taste of the plant can be very intense because of the wind. Plants make more oily stuff, so the taste is better. 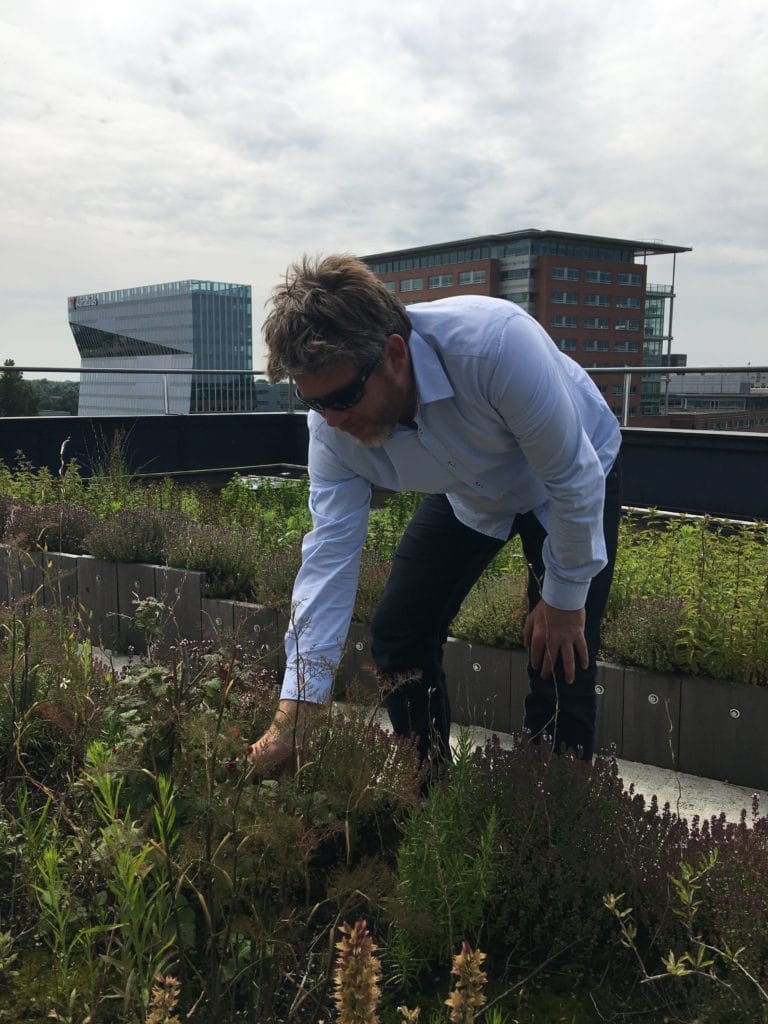 How did you even end up on the roof after being in high-end residential gardens?

Back in 2009, we started building the roof gardens, and we saw that it can be the place to solve some problems. Because when we’re talking about rainwater, there is a problem on the ground floor, and most of the rain in the city falls on that roof.

You have designed, created, and maintain rooftop gardens for Vermeer, a Michelin-starred restaurant. How much of the crops grown on the rooftop can Vermeer really use for its restaurant?

With Vermeer, we are now in our third year. This year we made a system of crates of seeds and seedlings placed on the rooftop.

It’s on the roof for three weeks. It’s harvested, and we take the crate out, and put in a new crate. This is how we grow eight or nine times more crops on the roof.

Normally from the roof, it’s possible to harvest one, maybe two times, but using a system of changing crates, it makes it more efficient.

Even with this system, is it for marketing purposes — how much can a restaurant really rely on a roof garden?

It is a way to start growing professionally. The restaurant has adjusted their menu [based] on what is growing on the rooftop.

What we want is a greener city, harvesting rainwater, and plant things we use. We are also reducing waste.

The next thing is working with an electric truck, to take it from the greenhouse to the place where it is grown, and regrow only with rainwater. By using rainwater, we help the city.

We are also working with a grower that hires former drug-addicts. Now the guys are driving the trucks, picking up the crates, and putting in the new crates with crops to a place on the corner of the Zeedijk where they used to hang around.

What is next is that we have just developed a new smart crate to put on the roof. The last four months we’ve been designing, redesigning, and now we have a great [system], which is so clever and so simple.

It’s going to be in production from September. We’re going to do that with the company who makes the system. Together we can make [the] city cleaner.

Tell us how the new crate system will help roof gardens. 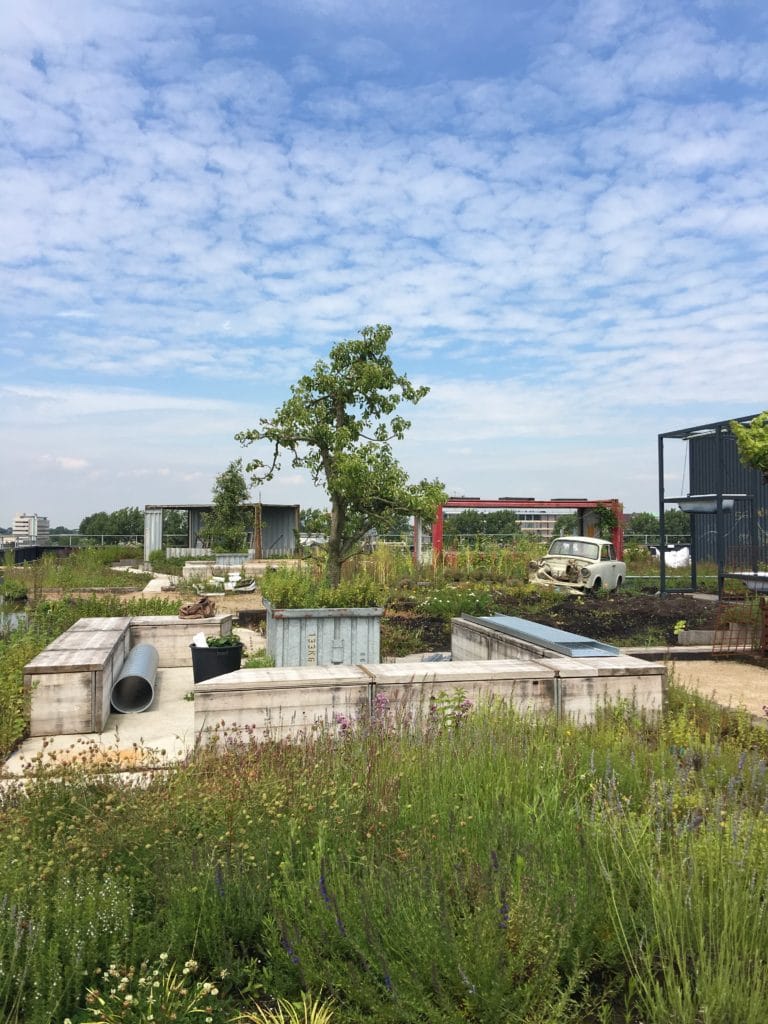 But when the soil and the plants are on crates, it is similar to a conveyor belt. You are putting in crates, growing, harvesting, and taking it out and putting it in again.

When you grow potatoes, you can’t grow potatoes next season in the same soil. With the crate system, it gets its own soil; you take the old soil after you harvest. And you have more production on the same size of lot.

What do you do with the soil?

It depends on what kind of crop. [With] some crops, [it] is still very good; you just fertilize. Other soil, when it’s completely empty, it’s dry stuff, which we still can use if we put it into the bigger amount of soil.

Who is an impact maker who has made an imprint on your professional DNA?

There have been several. One is a Dutch guy, Daan Roosegaarde. He’s an artist and made new things by separating and combining things already in existence. You don’t have to invent all by yourself. [Roosegaarde came up with a smart highway incorporating lights that only turn on when you drive on it and Dynamic Paint that illuminates road conditions when it is appropriate].

Everybody says food and water are the biggest problems. Not in my opinion, because for clean water and food, you need energy. 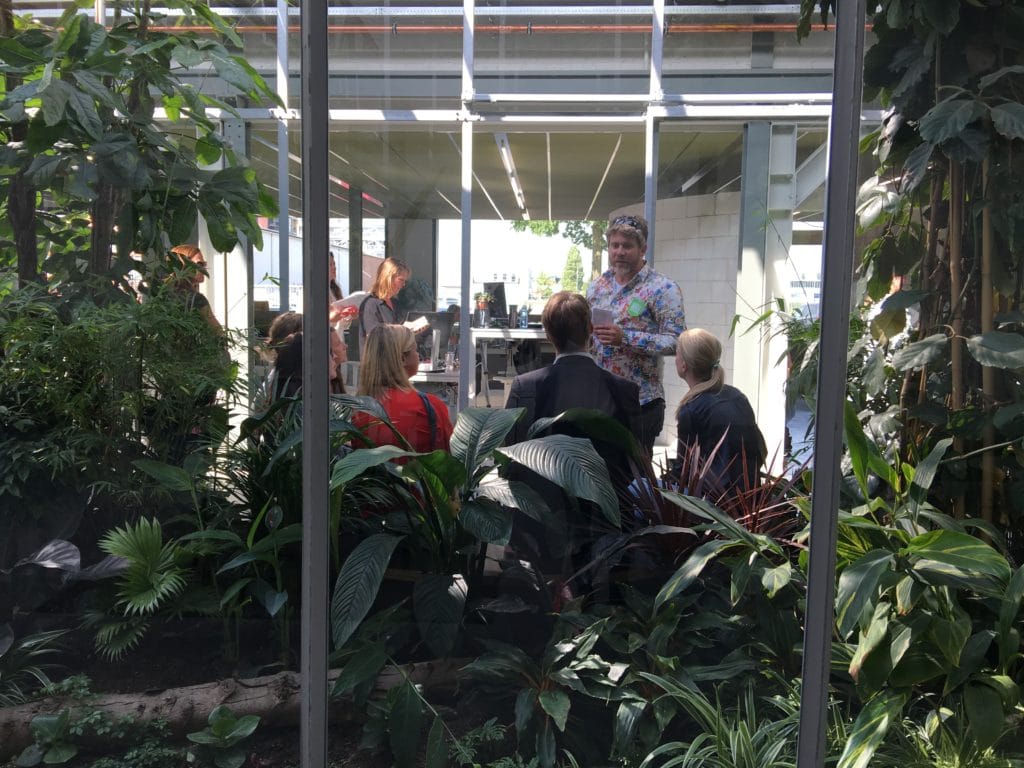 Philip van Traa in one of his projects.

Sharing knowledge and sharing energy. If we can share ideas — and I’m not sending you a bill — great things can happen.

In the world, power is a problem. Because if everybody has his own energy, water, and food … then I can’t tell you anymore, “You’ve got to listen to me.” But not everybody — those in power — want to share…