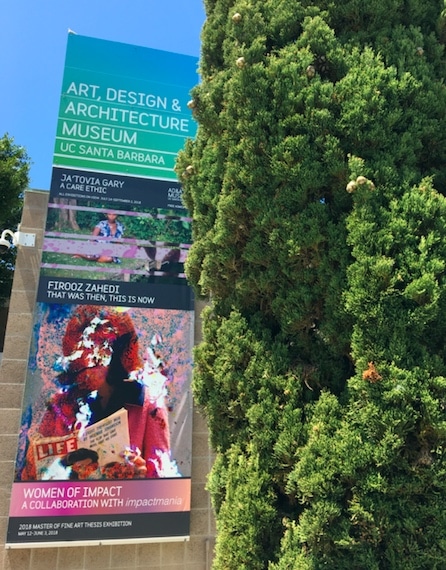 Although most media would like us to believe that women have taken a backseat in driving cultural, social, and economic impact, impactmania has featured more than 130 female change-makers in 30 countries, including artists, Intel’s Chief Diversity Officer, ambassadors, impact investors, architects, a Grammy award-winner, social entrepreneurs, adidas Senior Director, and a Nobel Peace Prize nominee. Considering the current empowering spirit, and the enduring equality issues raised by women, this theme is perfectly timed.

On July 19, 2018 — the 170th Anniversary of Seneca Falls, the first women’s rights convention in the United States — the AD&A Museum and the University of California, Santa Barbara will officially co-launch the book Women of Impact.

The night will be celebrated with a presentation of the book Women of Impact, a panel discussion including interviewees from different cities and countries who are represented in the book. Augmenting this project is an exhibition at the AD&A Museum that underscores some of the featured women’s contributions through audio/visual installations. There will be opportunities for the public to submit their own recordings of interviews with women of impact in their own lives. Integral to the conception of this element of the project is the recognition that everyday women make significant contributions to those around them.

The Women of Impact exhibition and conversations featuring a changing roster of participants, and will travel to other national and international institutions.

Internship component: Five AD&A Museum interns are currently participating in this program. They receive course credit for researching, interviewing, and contributing to the Museum’s blog and newsletters and impactmania’s website with original content. The interns are also contributing to the development and implementation of the Women of Impact panel discussion and exhibition by working with Museum and impactmania staff.

The Art, Design & Architecture Museum is an AAM accredited museum and teaching institution on the campus of UC Santa Barbara, a Research I University, among the top 10 public universities in the nation. Our mission is to stimulate research, support artistic practice, and generate original programming through the Museum’s collections. Additionally, the Museum has become the leading platform for bringing together faculty and students across disciplines, connecting the arts, humanities, and sciences, with today’s social issues. The result is a roster of unique exhibitions and events that draw upon the holdings of the Museum, as well as the brain trust/interdisciplinary nature of the campus as a whole. Teaching plays a large role in all that we do, as evidenced in the exhibitions we produce, but also in the Museum’s active intern program that trains 15-20 students annually to work in museums and teach art in the public schools. As a National Hispanic Serving Institution with numerous culturally-based student associations and departments, our interns represent the diversity of our state and country.

impactmania is an online platform featuring people and projects that drive cultural, social, and economic impact to inspire, involve, and connect the current and next-generation’s impact makers. Within two years, impactmania has interviewed more than 300 people in over 30 countries, spanning numerous disciplines and various for-profit and for-purpose enterprises. One of impactmania’s video stories was featured at the United Nations (UN) in 2017. A number of their interviewees and their projects have gone on to be featured at the White House, in The New York Times, Wall Street Journal, Business Insider, Wired, and others. impactmania has become a source cited by the Harvard Business School, University of Southern California (USC), and the U.S. Consulate.