Yuliya Mamontova shares the challenges of starting a vodka business in a male dominated industry, why she chose to work with artist Karim Rashid for the bottle design, and how she produces responsibly.

Yuliya grew up seeing her grandmother Anastasia make vodka to trade with the neighbors for chickens and supplies. Her grandaunt attempted to create a vodka business in the former Soviet Union during a time when a female vodka maker was not accepted. These women were the inspirations for Yuliya to start AnestasiA Vodka in the U.S.

Yuliya, your grandparents were vodka producers and you are obviously experienced with the craft. But what was the most challenging step in founding Anesthesia Vodka?

I have gotten used to some of the questions I now take humorously, although in the beginning it was a bit offensive to me. Questions such as “Who signs the check? Who is really behind this?” Many people in the industry expect that there is a man running the business.

That’s not the case right? It’s you!

I’m running this company 24/7! I do have a male partner, who is a full time dentist! He encouraged me to start this business, and he helped out here and there, but the business is fully on me. People think that there is a group of Wall Street guys, a bunch of men running the company, and I am just the face of the brand, which is certainly not the case.

Why was it important for you to produce AnestasiA Vodka here? You were deliberate about the vodka being made in the U.S.

The quality of the product was very important to me. Even though I come from Ukraine, from a family of vodka makers for generations — grandparents, great-grandparents. To produce a product with integrity, you need to supervise the quality.

I couldn’t be fully onboard with importing something from Eastern Europe, from Ukraine. Because of the ecological situation with what happened in Chernobyl [catastrophic nuclear accident] I can’t be on top of what’s going on if I live here and the product would be made in Ukraine.

I am also grateful for what this country gave to me. I want to give back to it by giving jobs to people who live here and create a support industry here. 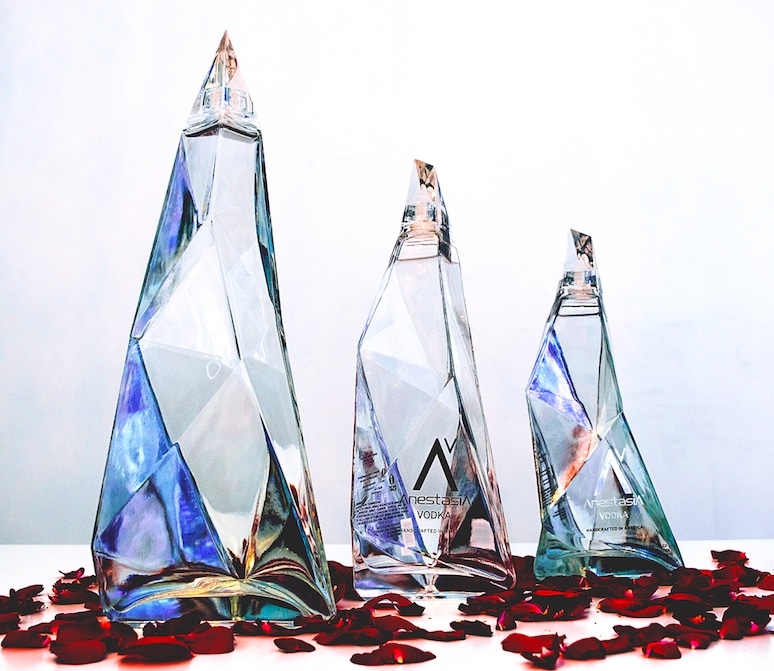 How did you end up working with artist Karim Rashid on the bottle design?

I’m an artist. For me, it was very important that the product is beautifully and visually impactful.

As an artist, I spend a lot of time in museums. I saw some of Karim Rashid’s design works in a permanent collection at MoMA. I just fell in love with his concept that design and beauty should be democratic, it should be for everybody. That every object that we use in our daily lives could be beautiful like a piece of art. When it was a time to produce the design for the bottle, I approached him. We worked together in developing the design.

I wanted something artistic and utilitarian. I struggled for years that there’s a notion that art has to be nonfunctional and unaffordable. This is something that I would like to change by creating a piece of art that could be democratic — that everybody can get inspired by and admire.

You also mentioned modern sustainability as one of your commitments. Give me an example of how you see that reflected in the product: how is it responsibly produced.

First of all, we use recycled glass, instead of producing new glass. It is something that encourages people to recycle and upcycle. The DNA of the bottle is that you don’t feel like throwing it away. People buy multiple bottles and collect them, or use them as vases or a sculpture on the shelf. We also donate 1 percent of our sales to 1% For The Planet.

Anything you do in terms of water that you use to produce AnestasiA Vodka?

What has been a surprising learning being an entrepreneur? Anything unexpected you learned?

I learned a lot! One of the things that I’ve learned is that you have to delegate work. As an entrepreneur you start working by yourself and you do everything.

The learning was to let go of control and believe that it will work itself out if you trust the work to the right people.

It is very important for entrepreneurs to have enough time on their hands to keep thinking creatively.

We always ask our interviewees who has made an imprint on their professional DNA. If you would have to name one or two people who have formed you as an artist or as an entrepreneur, who would that be?

You meet so many amazing interesting people when you create a new original project. Recently I started working with this amazing woman, Rushka Bergman. She is an image-maker and works with many entertainment artists and singers. She was the personal stylist of Michael Jackson.

I recently started working with her, as our Director of PR. Her energy is so alive. It brings in the importance of action. Sometimes we analyze things too much. What needs to be done is action and the action is needed now. Think big and act big right now.

We expanded from a small 200 square feet to almost 1,000 square feet office in a month. We’re working signing on a world-renowned celebrity. It’s Rushka’s energy and her encouragement of action that made an impact on me recently.

We just hired a sales team, 50 percent of my sales is outside the U.S. Anywhere from Australia to Chile, Azerbaijan, Italy, and Japan. So, we are expanding distribution and as mentioned, we are also looking to sign on a female celebrity as a brand ambassador for AnestasiA Vodka!

AnestasiA Vodka is handcrafted small batch vodka using the water of Bend, Oregon and corn from the Pacific Northwest. It is distilled five times and filtered five times and earned eight gold medals.