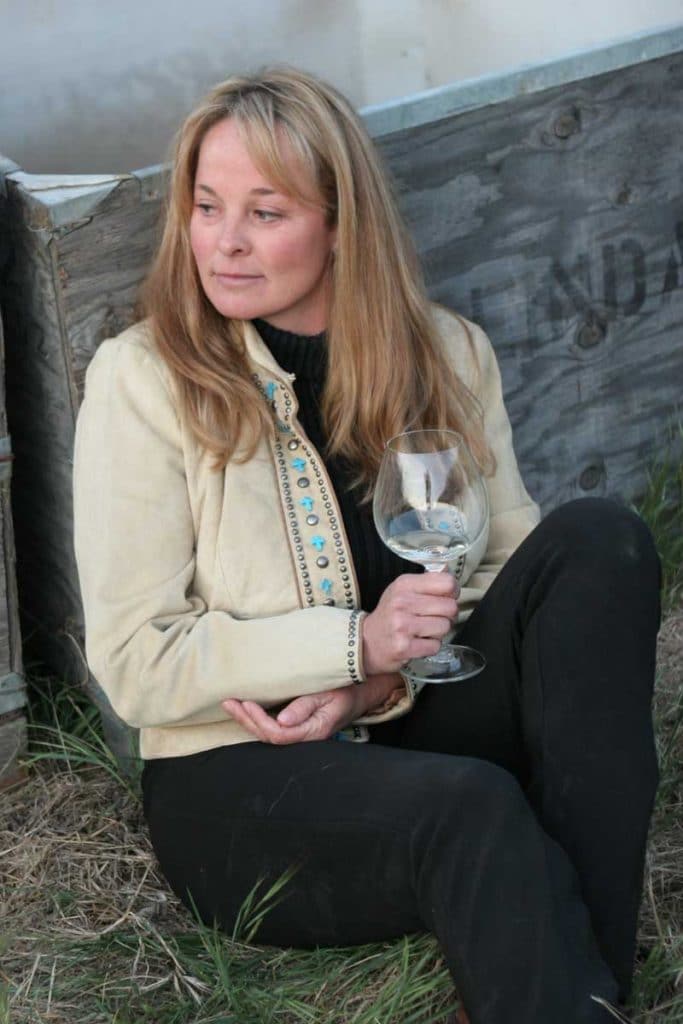 During Harvest time, impactmania caught up with winemaker Kris Curran, one of the famous winemakers in California. Together with Bruno D’Alfonso, they are founders of D’Alfonso & Curran Wines.

Curran spoke with impactmania about how to bring character to wine; how she forgot she is an entrepreneur; and the precarious future of the Santa Barbara County’s wine region.

Why the wine business, Kris?

What was it specifically about the wine business that appealed to you?

I grew up in Santa Ynez Valley and raised all sorts of animals. I loved the idea that the wine industry was physical; you get your hands dirty. I love food, wine, and the people that come along with the culture.

They’re pretty much intertwined. For the type of wines I make, it’s probably 80 percent science and 20 percent craft. To make the best wine is to know how to stop a train wreck from happening. [Laughs.] You can’t walk away from your wines and come back after a couple of months.

Especially during Harvest, we have probably 40 lots going on. They have to be tested and tasted every day. The craft comes in toward the end of the winemaking process, prior to bottling.

A lot of winemakers drop the ball on the one-yard line, right before they get in for a touchdown. At bottling they could do one more thing to polish off that wine. They don’t because they don’t take the time or they don’t understand the science. 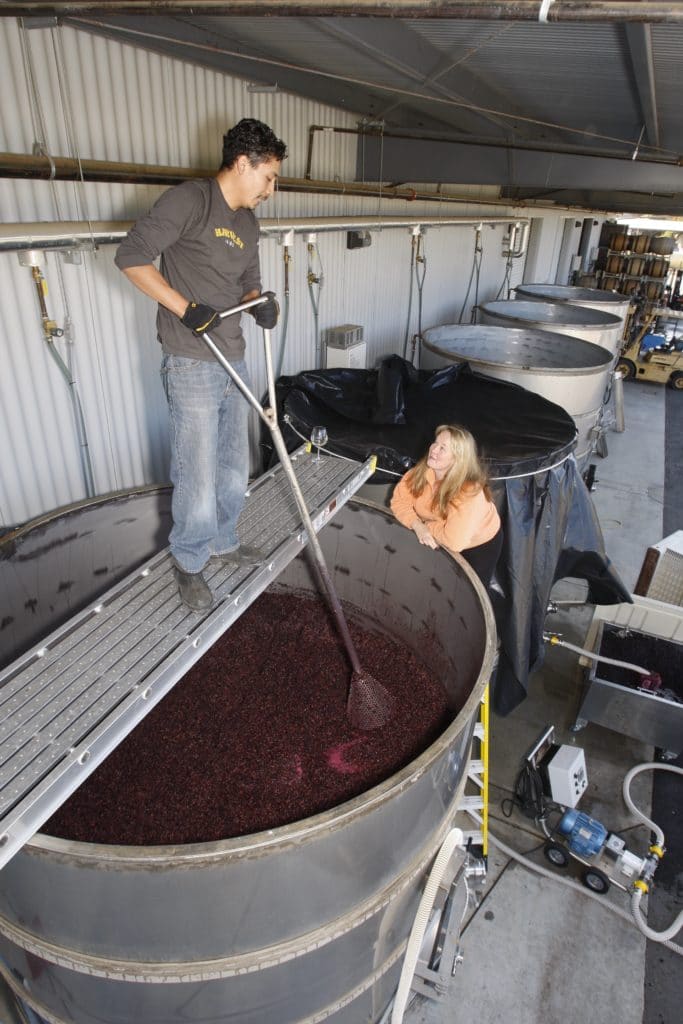 Homar is punching down and pumping over fermenting Pinot Noirs.

Give me an example of that one last step. What do you still tinker with?

We have our own bottling line. There have been times where we’ve made a blend and even filtered the blend. After filtration, you might say, “It needs something else — another fining.” Fining is like sanding wood. You can’t use steel wool to get that lacquered look; then there’s no real character about it. That’s what we call over-fining when you tend to polish a wine too much. But then under-fining is where there’s still a hint of bitterness or astringency in a wine.

If you’ve already scheduled your bottling out six months in advance, you don’t have the luxury of doing that. Owning your own equipment and your bottle line affords you the ability to take that last step and time to do that. We bottle year round for that reason. 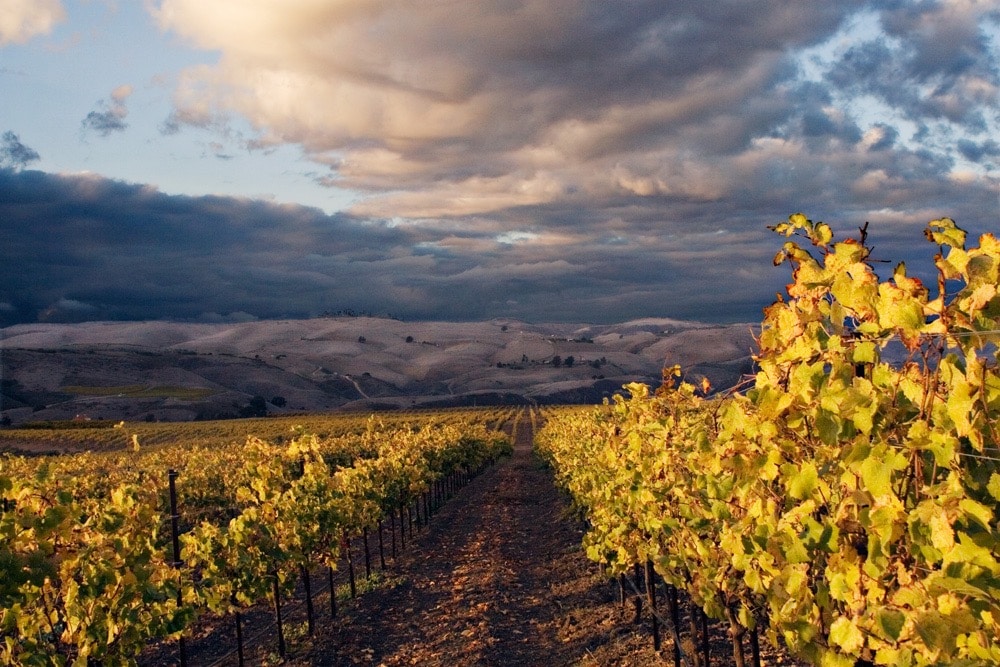 What has been a surprising learning building your own label?

I’ve had my own label since 1996, my first vintage. I was hired right after graduation at Cambria Winery, which is part of Kendall-Jackson. I had the ability to make wine under my employment agreement. I only paid for grapes and packaging.

Then I started two wineries up: Koehler Winery and Sea Smoke Cellars. I learned a lot starting projects from the ground up.

When Bruno and I started the D’Alfonso-Curran, on Rancho La Viña, in Santa Rita Hills, it was a big difference because before I didn’t have to worry about the water and electric bills, unemployment, and workman’s comp.

When you called, I thought, “Why does she want to talk to me? I am not an entrepreneur!” I have so much love for what I do in the winery that I forgot that I’m running an entire company”

You’re not an entrepreneur? [Laughs.]

It’s funny because when people ask, “What do you do?” I say, “I’m a winemaker.” Had I known what I was getting myself into, I would have been scared to death. [Laughs.] To get Koehler started through Santa Barbara County and the state and the federal government with building permits…ignorance is bliss. I learned by doing, which is the tag line for Cal-Poly! [Laughs.] [Curran’s alma mater.]

You throw yourself off the cliff, hope you can fly, and then you don’t have a choice, you just do it.

Sometimes it is. Sometimes you can over-think a project.

We’ve got quite a few women winemakers. The wine industry is probably one of the best industries for the acceptance of women. People are open to women being involved in all aspects of the wine industry. However, there are probably ten or less women-owned wineries — Rebecca Work of Ampelos Cellars and Kathy Joseph of Fiddlehead Cellars are some examples.

When I studied at Fresno State, probably 10 percent of the class were women. Five years ago, when I went back to give a lecture, it was a much bigger class and half of the students were women.

What advice would you give someone going into the wine business?

At small wineries that are upstart, you’ll get your hands dirty. Do your agricultural mechanics and electric classes.

California makes 85 percent of all wines in the United States. With the under supply of so many cases of wine a year, do you see Santa Barbara County expanding even more and does that concern you?

Santa Barbara County has more plantings of grapes. I don’t expect many more wineries, because Santa Barbara is not winery-friendly. The County doesn’t find the bars, restaurants, and liquor stores to be a problem, but they do have a problem with wineries.

There were a couple of wineries in the Valley that pushed with what they wanted to do with their property. When anybody tries to covertly do something, it make people say, “Wait a minute, now we have to look at everybody.” Not everyone out here’s having weddings and renting the property out to 300 people.

Let’s say we would retire. With the current regulations, I am not sure if anybody is going to take over. You are going to see people buy the fruit and truck it to wherever they can live.

We are all worried, because the wine industry does provide a lot of money for the County.

Bruno has left an imprint on your professional DNA. Who else has impacted you as a winemaker?

Yes, Bruno has been a huge mentor. I had the opportunity to work with Dave Guffy when I was at Cambria Winery. It was a wonderful learning experience. Probably one of my biggest mentors was Dr. Carlos Muller at Fresno State, a brilliant man. He gave me the grounding of what I needed to know on a (bio-) chemistry basis. It has enabled me to create the wines I have made in my career. 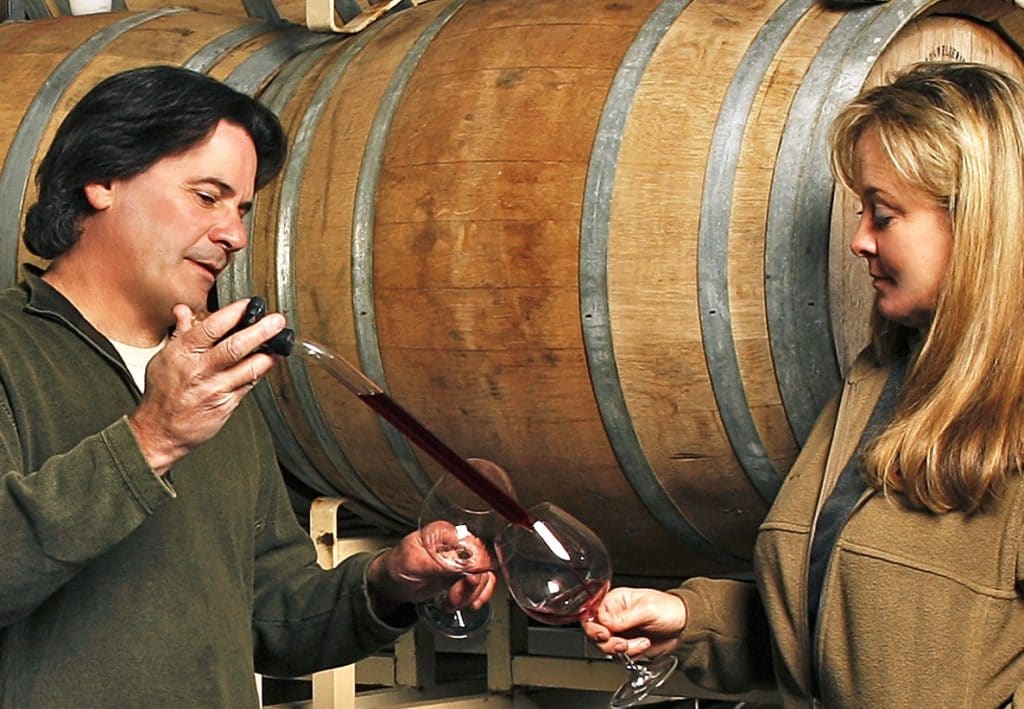 Give me an example of something that Bruno taught you.

Bruno likes to use co-pigmentation. It’s a chemical phenomenon that occurs when you add a related white grape skin to some related red grapes. It is a difficult process because sometimes grapes don’t ripen at the same time. By putting Pinot Grigio skins in with Pinot Noir, it stabilizes the color better, and it actually creates a darker Pinot Noir.

Bruno can fix grapes on the vines that people were going to reject. Over the phone, he was able to walk winemakers step-by-step on what to do, “Add this enzyme and wait 24 hours, then mix it and then add that enzyme…”

He’s a great scientist. It’s interesting because he received his oenology degree from UC Davis and I received mine from Fresno State. The two schools definitely taught different sort of things. We get into these arguments sometimes. It’s not even a belief, it’s, “I know this because I was taught this.” I give him a hard time, I say, “You must have skipped class that day!” It’s fun to work with him. 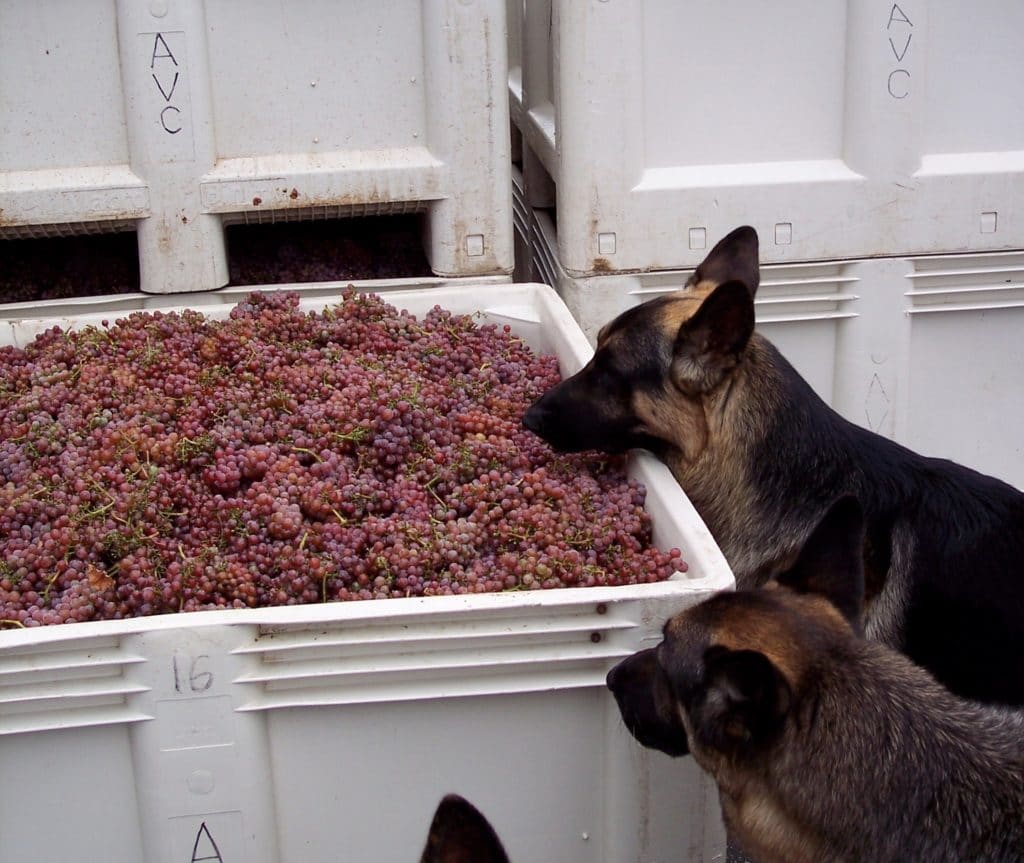 The D’Alfonso-Curran dogs maintain chi in the vineyard.

The other partners you spend 24/7 with are the dogs at the winery. I read that they maintain the chi of the winery.

They do, I believe that. It’s scientifically proven that animals lower blood pressure. They add humor when you need it at the winery.

Our new little guy Wyatt is the first dog that likes wine. We call him our leak detector. If he comes back to you covered in sticky red, it means you have a leaky valve someplace!

Kris Curran worked with Bruno D’Alfonso at Sanford Winery, graduated with a science degree from Cal Poly and pursued a second degree at Fresno State. She started her winemaker career as assistant winemaker at Cambria Winery (part of Kendall-Jackson) and became the founding winemaker at Koehler Winery and Sea Smoke Cellars.

When Sea Smoke was featured in the film Sideways, it was already a much sought after wine. After seven vintages at Sea Smoke, Curran became the winemaker at Foley Wines before launching her company with Bruno D’Alfonso.