Veronika Scott: Designing a Coat to Break a Cycle
March 5, 2014 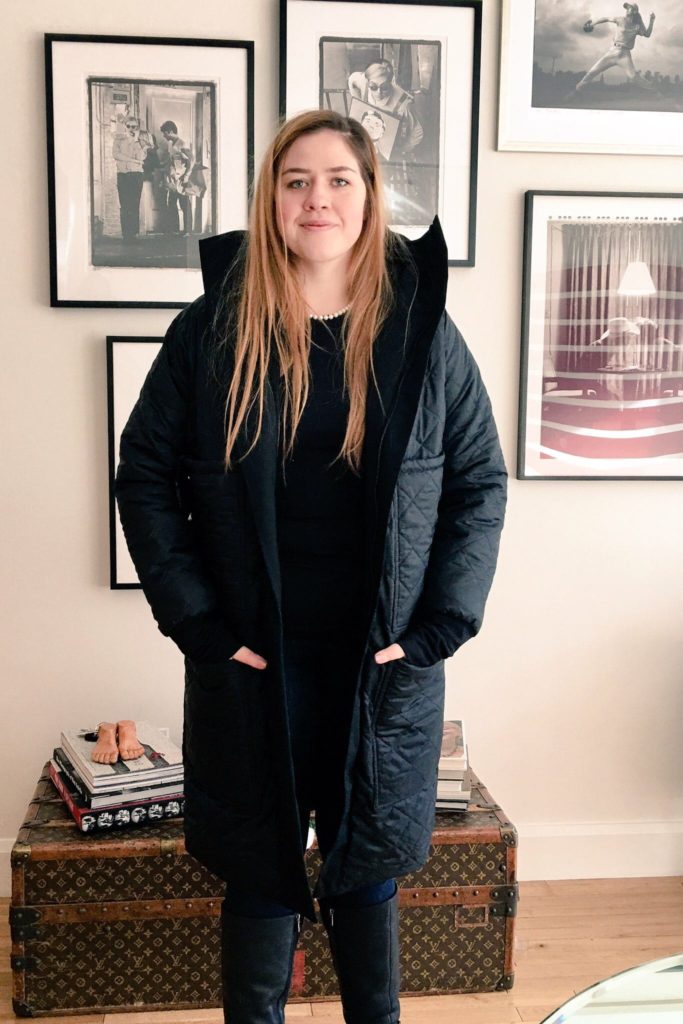 Designing a Coat to Break a Cycle

Veronika Scott, Founder and CEO of The Empowerment Plan, was challenged in a class at The College for Creative Studies in Detroit to create a product to fill an actual need in her community. Scott chose to work with the homeless community and designed a water-resistant coat, which can transform into a sleeping bag.

The EMPWR coat grew into a social enterprise, The Empowerment Plan, and employed 39 previously homeless individuals who produced and (through partnerships with nonprofits) distributed over 15,000 coats.

impactmania learned more about Veronika Scott’s hometown of Detroit, breaking the cycle of houselessness and poverty, and the importance of working directly with the people you want to empower.

What progress have you witnessed in Detroit?

Veronika:
Detroit has gone through a pretty amazing transformation. I’ve been living in downtown Detroit for the last eight years. The block that Empowerment Plan is located on used to be 80 percent abandoned homes and buildings. Now there’s only one house on this block that is empty. You can see these pockets begin to change around the city.

I’m looking forward to seeing how these little communities can spread and grow and at the same time not push people out. One of my biggest concerns is that Detroit is too trendy right now. We don’t want gentrification to ruin this beautiful and culturally mixed fantastic city.

What do you think has been needed for this social impact?

We hit rock-bottom point as a city with the bankruptcy. You can look at the economic collapse of a community as an opportunity to take the initiative to make change happen.

A lot of Detroiters see this as something that they don’t expect the government to take care of. They need to make the change happen for themselves if they want Detroit to be different.

That’s something unlike almost any other city I’ve been to. We’ve gone through so much as far as corruption and economic collapse and hardship. There was so much media attention on the city five years ago.

Everybody had covered Detroit as this post-apocalyptic wasteland. The cover of Time Magazine basically said there was nothing but ruins left. Everybody rose up against that because, “No, no, we’re still here!”

Then all of a sudden the tone started to change. It went from “it’s dead” to a phoenix rising from the ashes. All of a sudden it’s this wild west of creativity and it’s a clean slate.

There’s a population of people that have been here for generations. They have stood through the best moments of the city, but also the worst. It was a combination of the media, everything that had happened with the corporations, all of it at once.

The greatest social entrepreneurs that I’ve had the privilege to meet have the same perspective — authenticity is an overused word — but make sure that you’re working with the people you’re supposed to help.

A lot of starting social entrepreneurs have the perspective that they’re gonna come in and save everybody — the savior complex. They do it with communities that they’re not a part of and they have no connection to. But they act as if they do because they assume they are in better standing.

I watch this happen constantly. It’s, “I’m gonna come in and fix everything.” Frankly, who said that they needed your help, your saving, or your fixing?

It’s important not to reach into areas that you may not know. A lot of good can be done around the corner from you; communities you are already a part of. It’s important to make sure that you’re spending time and doing this with the people who need it. Their buy in, their belief, and everything that has to do with them is critical for your business. Without them, you don’t have anything. It’s not the other way around. Without you they’ll go on; without them you don’t have anything. That’s where people get confused.

The Empowerment Plan and my job, without the people we hire, I have nothing. Without them, this does not exist. We wouldn’t make coats, but we also wouldn’t make an impact. 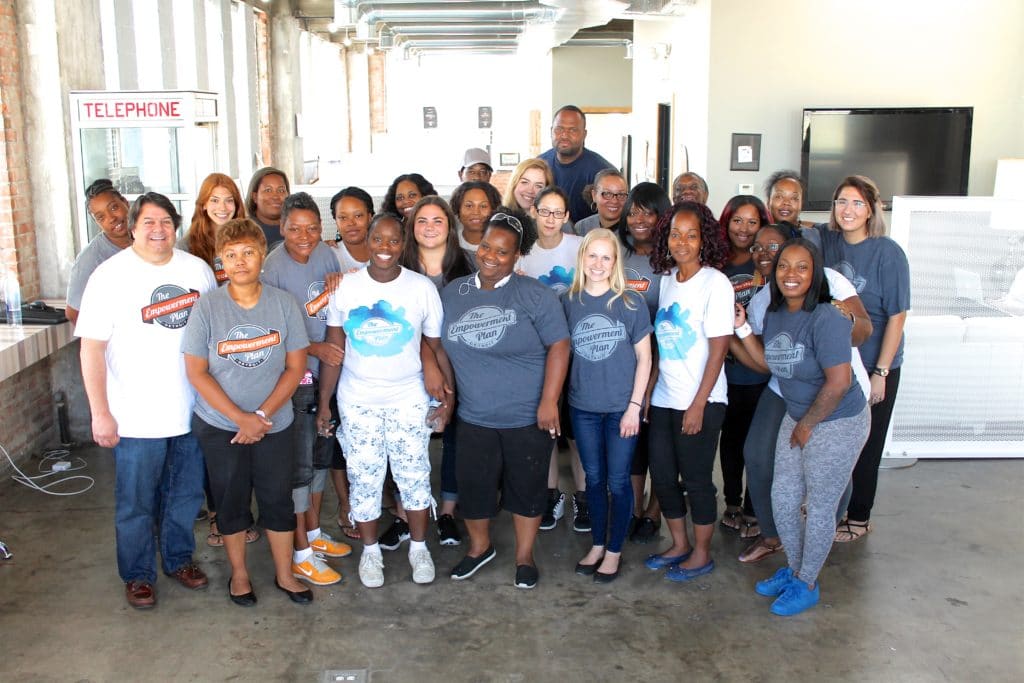 The team at the Empowerment Plan. Photo by Caroline Garau.

What has been a surprising learning for you building The Empowerment Plan?

So many things! There’s never a point of being comfortable.

It’s interesting ‘cause when I started out I thought, “Well, it’s gonna be crazy in the startup days.” You almost burn yourself out. But then the next year we’ll be able to level off a bit, or we’ll be able to do this and it will be much easier. It never really got easier.

It’s a good thing though. It’s getting used to the roller coaster ride. You hopefully adapt to the next thing, but if you’re doing a good job you’re growing constantly. The growth curve is a lot more intense than I ever thought it would be. The growing is a lot harder than starting.

What was a critical factor for you to be able to scale?

It’s almost that naive belief that it will work. Then from there, obviously there are things like infrastructure needs. You need the critical amount of capital.

We had zero in the bank account twice within the first two years. We’ve doubled every year since I began. We started with three people, and that lead to six, and then six lead to 12, and from 12 it went to 24. It’s really interesting to look at the hockey stick of growth, because it’s exponential, but it started off really small.

It was important having that proof of concept. The more data we get, the more scaling is requested and required of us. All of a sudden more cities, more people want to adopt this.

Data has been the coolest and the greatest part of the work that we do. It is not just an anecdote of somebody coming out of the shelter. It’s so much more than that. That’s been one of the biggest drivers behind scale.

Give me an example of a data point.

Every [homeless] person we hired moved back into the shelter within the first two to six weeks. People after six months with us potentially move out into other jobs. We are tracking the number of people that we’ve hired and how many kids they have. That’s the number of kids getting pulled out of the shelter system.

You’ve been able to break the cycle.

That’s really been our goal, to break the cycle of generational poverty. It’s very difficult. It would be so much easier running a nonprofit. This is two times as hard.

Then quality is huge for us. We’re launching a direct to consumer line. The product isn’t something that we want people to appreciate out of pity. It’s not a pity purchase.

No, the coat has to be good enough to stand on its own in any marketplace. For people who want it because it’s good. It is important for the dignity of the workforce. They wanna put out something that’s wonderful.

They want people to be proud of the work that they’re doing. Proud to wear the product they spend every day making. 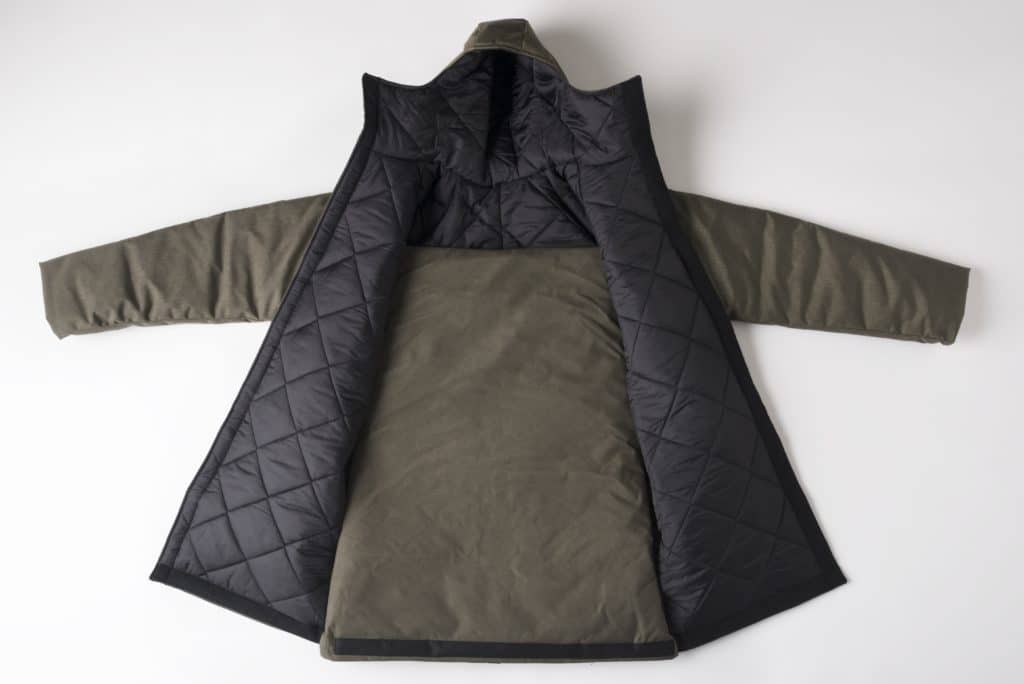 What is the process to distribute the coats? How do you decide who receives one?

We own employment and we own the production. We are almost like a business to business non-profit.

We don’t hire people directly off the streets. We partner with other shelters, outreach groups, and nonprofits; these channels already exist.

We can’t tell you who in San Francisco on the street actually needs the jacket. We don’t know San Francisco at all. We’ve partnered with other nonprofit outreach groups in 40 different states and in six Canadian provinces, New Zealand, Australia, Switzerland, Sweden, Malaysia, South Africa, the UK, and France over the last five years to do the distribution. We verify and work with them to make sure they have reputable business practices. Then we send them the product. Only 50 percent of our product has gone out in Detroit.

We always ask our interviewees who has left an imprint on their professional DNA. I’m sure there have been many. Who would that be, somebody who has formed you as an entrepreneur?

There are three major ones.

Imre Molnar, who was the previous Dean of the College of Creative Studies and had been Designer Director for Patagonia for 20 years. He took me under his wing.

He thought The Empowerment Plan could be a business before I did. I was going to art school, and business was never something that was talked about. I thought entrepreneurship was reserved for a higher class of people that have money and connections and networks. All this stuff that I did not have, and he was the first person that was like, “No, no, no, this does need to happen today.”

Then the second person that’s had a massive impact is Mark Valade, the CEO of Carhartt. Imre introduced me to him. Carhartt became our largest donor, but also our very first ever donor. I’d never seen a production facility; I had just learned how to sew for this project. I spent a lot of time in Carhartt’s factory. 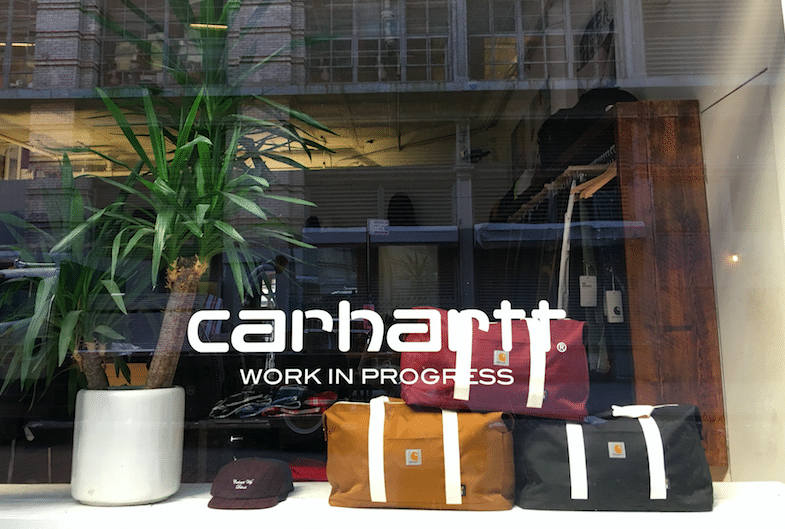 Carhartt, the first and one of the largest sponsors of The Empowerment Plan.

Then, the third person is probably the most critical. Annis Maxwell was one of the first three people I ever hired. She was about 58 and became the den mother to everybody.

Annis was that person even for me. Three years into working with us, she was getting out of her car walking to her house, and she collapsed and died of a heart attack.

Losing her was one of the hardest things that I’ve ever gone through. She brought this family atmosphere and mentorship. It took a long time to recognize what was gone, and what do you do when somebody that you’ve built a whole company culture around dies?

Losing her also made me realize that it wasn’t just a class project. Here’s this person that was able to get a home, a car, set up a college fund for her granddaughter. All of these things that she was with us that may or may not have existed if we weren’t there. That was one of the hardest lessons, though it was the one that was the most powerful for me to learn, that this is more than just a project.

How do we keep that and sustain that?

What would Annis say if she would see you now?

Annis was really excited about retail, the direct consumer. I know she would be pumped about that. She would be laughing; this is bigger than we had ever imagined.

She always said that if I ever wanted her to leave, I’d have to roll her to the curb in her sewing chair. That was her line all the time.

You mentioned retail, is that the next big thing?

That is the next big thing, revenue-wise. It sustains the organization and will get us to a point where we can financially take care of ourselves, which is very exciting and not very common within the nonprofit space.

There certainly have been times where it’s been insanely difficult, but I never thought, “Well, this is it, done.” Even when we hit zero [money in the bank]. It was, “Okay, well, we’re gonna get this next donation tomorrow.” Unless I’m literally being forced to stop by somebody or something, we’re just gonna keep going.