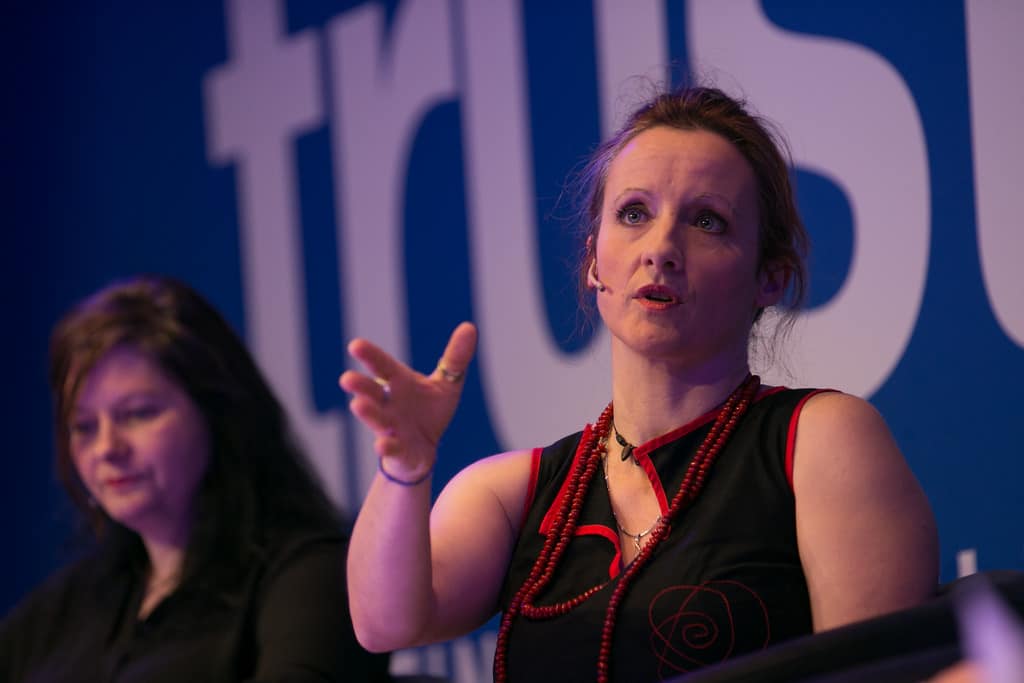 From the initial conversation impactmania had with Oguntê, we felt we found our tribe. Both organizations believe in for-profit and for-purpose and while impactmania is interviewing 101 Women of Impact, Oguntê has a network called ImpactWomen.

Servane Mouazan is the founder and CEO of Oguntê. She founded it to prove that women, when given more skills and space, can solve pressing social and environmental issues and create commercial opportunities at the same time. Servane offered a few examples of the social enterprises she is working with, how they drive impact, and why you should schedule a strategy day in the park. Just don’t call it a strategy day!

Ogunte is a woman who protects those at sea, she is a warrior and mother figure — not the quiet one! [Laughs.]

In certain parts of the world, Nigeria among others, Ogunte is part of a constellation of spirits (Orixas) that accompany people from their birth to death. These orixas are also found in Candomble, a spiritual practice primarily developed in Brazil with a number of elements derived from African culture. An old woman said to me years ago while I was working in Rio, “You are from Ogunte, bless your spirit.” I hope she was right, because otherwise, I would have been in great trouble for naming my business Ogunte! [Laughs.]

Ogunte focuses on coaching women entrepreneurs. What could women do to better support other women?

That’s an interesting question, because years ago we had very straight answers, and now… Politics is very complex and when there’s uncertainty, people tend to embrace racism, sexism, and xenophobia even more. In the global north, we thought we were cozy and secure. Now we realize we’re not immune from the craziness of the world. We are part of it and we certainly caused most of it.

How can women support other women? I think they have to really reflect on how they can become better leaders, how they can let their voices be heard, how they can encourage their partners (male or female) to be more of a support for them as well.

In the end it’s about redefining what you want and how you want to be treated. You can’t just wait for things to happen. You can draw big theories, but at the end of the day, it’s the tiny step you’re able to make yourself that counts.

In all these years working with entrepreneurs, what have you seen as the overriding challenge that they face?

I think there is a true challenge in finding the capacity to sit down and to strategize, to think beyond your day-to-day operations, and make sense of what’s happening. You may have a vision for the world, for your community, but how do you get there?

When entrepreneurs carve out time to be creative and start talking to people about what hinders them, what pains them, what hurts, they start designing products or services that are truly relevant. At the same time, you need a roof over your own head, pay the bills, raise funds… It is a fine balance. You have to have enough energy to make sound decisions every day, starting with you.

You have been building your company for the last decade plus. I’m sure there have been times where you wanted to drop it all. What is a step that you’ve had to take to move the company forward?

Yes, I’m still experiencing this now! Sometimes I realize that I don’t have enough financial backup, for example: How do I know that I can retire? I’m 43, but in my head I’m 23. How do I keep going? Because I’ve got to — I reach out to someone like you or to someone who is further ahead with their business. They put me in check. Honestly, people can tell me what to do, but generally, I don’t obey. [Laughs.] That’s why I am seeking out the help of a coach. They give me space. I want people to challenge me with a kick ass question, or challenge, or truth. I’m so stubborn that I sometimes want to prove them wrong! The other day, I woke up and said, “Dammit, I need a strategy day!” [Laughs.]

Spending the whole day trying to find a whiteboard that can cover my whole wall to write that strategy? [Laughs.]

First of all, calling it a strategy day probably makes most people’s hair rise up. So call it something else.

Second, don’t strategize with your usual team or in your usual environment. Don’t go in a cafe either. Go to the park. Anything that’s different and invite people who are not part of the team. Invite people who don’t just give you ideas or off the shelf solutions, but who will challenge you.

Third, invite a professional facilitator. She or he is going to take you from A to B, keep you on track, and shut you up if you bring long-winded nonsensical stuff.

Then ask the hard questions:

Why should people bother with what you make?

Whose world are you going to change if you do that?

What should people know about your product or service?

How would they hear about it?

What is the one thing you do very well?

If you claim that you will have a positive impact, how are you going to measure it?

What would make it a total failure?

You have been coaching others and you are an entrepreneur yourself, what is one of the trickiest thing to teach entrepreneurs?

To listen and to get on with. As a coach, I am creating a space where entrepreneurs can start to ask themselves the difficult questions. And then start to envisage the world outside of their bubble. I’ve been working with Luchadoras in Mexico for example. They are a collective of women media activists who lead various campaigns such as the prevention of online violence against women. When you listen to them, they don’t just talk about collaborations and distributed network, but they operate this way. In one of their projects, they work with Association for Progressive Communications (APC). [A distributed network of people who are doing work on Human Rights online.] Together they support people in becoming agents of change and disseminate an alternative feminist version of the world. It’s very powerful. 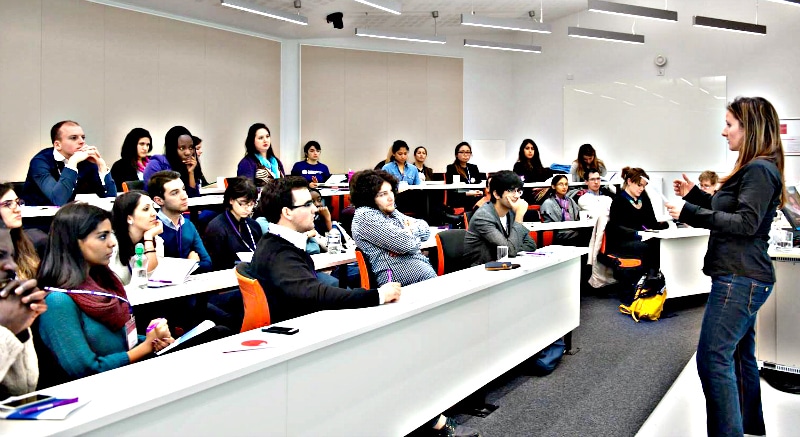 Servane at the Tata Social Enterprise Conference. An initiative of the Tata group and the Indian Institute of Management Calcutta (IIM-C).

What have you seen that other social entrepreneurs could learn from or could improve in their practices?

Luchadoras formed a collective, Siemprevivas, to amplify their impact. One of the collective’s activities is Voces de Mujeres a storytelling program in which women leaders — women who have their own groups in other parts of Mexico — learn a technology to broadcast their messages. It could be video, podcast radio, fiction radio, and tell the stories of women in their community.

This is an intersectional program gathering women from various locations, embracing various themes.

The collective realized that even as experienced trainers, they had to adapt the vocabulary, to include everyone. They had to re-think how they evaluated the journey traveled, the pace at which people learned, how people delivered outputs, the consequence of having some of these women empowered, going back to their community with a stronger voice. What happened to them? You need to be conscious about that.

Everybody loves storytelling, but secretly people say, “Well, it doesn’t really put bread and butter on the table.” My response is, “[Profit and purpose] are equally essential.” Storytelling is an essential foundation for peace building.

Yeah, and the facilitators learn as well. They become changed people, right? Because of the work they are doing. I think that’s the mark of progress. Things like: what did you learn during the process, how are you going to use that learning, where did you fail previously, and how can you be clear about your failure or your gains? We need to be very candid about that.

Has it become more acceptable to share failure stories?

I had a conversation with Roxanne Persaud who is studying failure. She is exploring how social entrepreneurs use or avoid failure or how they even talk about it. Failure is still very much coated in a sort of glamorous costume. We hear people talking generally about failure when they have learned something and passed that hurdle — they’re on the other side.

I can’t honestly say that I read a lot of impact reports, but I don’t see much about failure in the reporting, even though I’ve heard loads of negative impact experiences that people share in our workshops. Failure is part of the process.

Give me an example of an impactful project you have worked on?

I’ve done a lot of work in the prevention of violence against women in the past two years. An interesting example of is Chayn.co. It’s a fantastic group founded by Hera Hussein. They develop campaigns and co-design practical support tools with women who are facing violence and oppression.

Based on what these women are saying, Chayn develop tools that are relevant to all. They design “with, not for” women. So instead of creating yet another app, they develop tools using platforms that women already use, whether it is Google, Facebook, Twitter, WordPress, for instance. Ask yourself: what can you do, using what you already have?

One toolkit I particularly liked is: How to build a domestic violence case without a lawyer. Frankly, if I were faced with domestic violence, I wouldn’t know how to start a legal case. So Chayn put together a sort of road map, with information from lawyers, survivors, and people at risk. It is limpid and efficient.

What have you seen in the field that is required for social impact? What are the ingredients to drive second-order change?

The one thing that all these recipes have in common is the ability to think beyond a product and a service to actually look at a system. It is challenging. You’ll have to recognize that the community in which you work is not restricted to what you see with your eyes. There are a lot of invisible components. One of the ingredients is to be able to navigate a system in a nimble way and to understand that there are stakeholders around that you never thought about. You’ll need to learn their language and be very humble about the way you’re going to present your solution. Another key ingredient is having the people who are in need of support sit at the design table.

You are working on a novel…tell me about that.

I am working on an anticipation fiction that touches on many topics: tech, housing, energy, and gender. Looking at the future help simplify the stuff that I need to solve right now. The big frustration is that people, now and in the future, will have to face huge conflicts. It will be nasty. Many people have faced conflicts all their lives and for some people it won’t make any difference, because they’ve been living in political darkness for ages. And yet, a lot of them have managed to do fantastic work. We must find these examples, learn from them, and do our bit.