impactmania > Articles > Georgina Miranda: Mount Everest has nothing on Entrepreneurship!

Georgina Miranda: Mount Everest has nothing on Entrepreneurship!

Georgina Miranda: Mount Everest has nothing on Entrepreneurship!
April 26, 2017 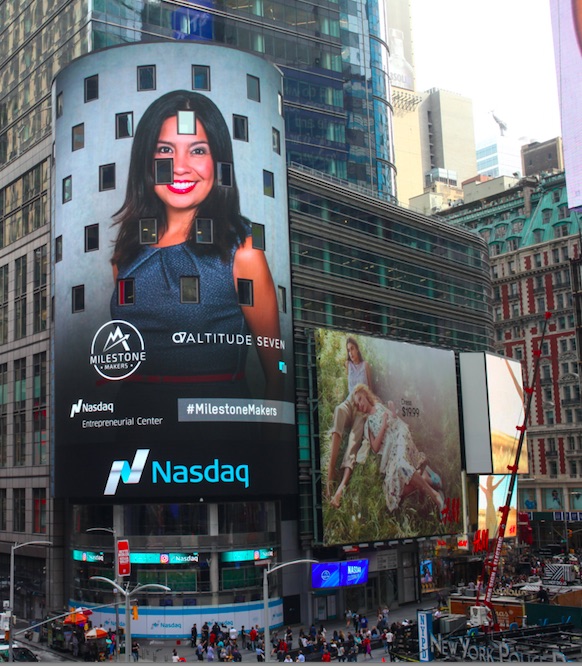 On April 11, 2017, Georgina Miranda, mountaineer and founder of Altitude Seven, along with her fellow MilestoneMakers & San Francisco 49ers CEO Jed York rang the Nasdaq Closing Bell from the Nasdaq Entrepreneurial Center in San Francisco. She looks back at the many peaks and valleys to get to this point.

impactmania spoke with Georgina Miranda about the article in Glamour magazine that spurred her to pursue the Explorers Grand Slam: climbing seven summits and skiing the last degree of the North and South Pole.

Before all of that, she had to learn to climb and ski!

You climbed many mountain peaks in the world, including the Mount Everest, twice. [The highest point in the world with a peak rises to 8,848 m or 29,028 ft 9 in.]

How did an indoor girl become an outdoor girl?

[Laughs.] I’m definitely the unlikely adventurer by many accounts. I signed up for an indoor rock-climbing course when I was 25. I was working full time, going to graduate school to get my MBA, and sitting for too many hours on the 409 freeway in Los Angeles.

I needed something that had nothing to do with school or work. There was a climbing gym near the campus. Saturday mornings I would go for 1 ½ hour and my mind was suddenly free.

Around the same time, I came across an article in Glamour magazine that Eve Ensler had written about her first trip to the Democratic Republic of Congo. The first line said, “I just returned from hell.” She depicts this very graphic account of her trip, and how many women had experienced sexual violence.

I was really shocked that I was reading about this in Glamour Magazine and not in a news publication. I thought, “If hundreds of thousands of men were being raped, the whole world would have heard about it.”

That inspired a crazy idea — let’s do something that you have never done before, that you don’t actually know that you can do, and maybe that will give you a voice to have a platform to speak about this.

I did some research as to the nonprofits that had been working in this area. International Medical Corp was one, based in Santa Monica. I was in LA at the time. I met with them and pitched this idea that I would go off and climb the highest peak on each continent.

This was when you had not climbed anything yet?

No, I had not climbed a thing! [Laughs.] The meeting was very funny. I said, I’ll pay for my own climbs. Whatever I raise goes straight to you.” And they said, “This is wonderful! We just have one question: what have you climbed?”

I was like, “I haven’t climbed anything. My first class is in eight months, and I’ll go on my first climb a month after that!”

I’m always grateful to them, because there was no judgment. There was just appreciation for a crazy idea. Had it not been for that, who know how this all would have gone down.

You climbed seven out of eight peaks now?

My goal was always to do the Explorer Grand Slam: seven summits and skiing the last degree of the North and South Pole. I never publicly said that, because I didn’t know how to ski! [Laughs]

I’ve learned to ski since then! This is the goal I am trying to complete in the next 12 months. I would have two more mountains to climb and then the two poles. 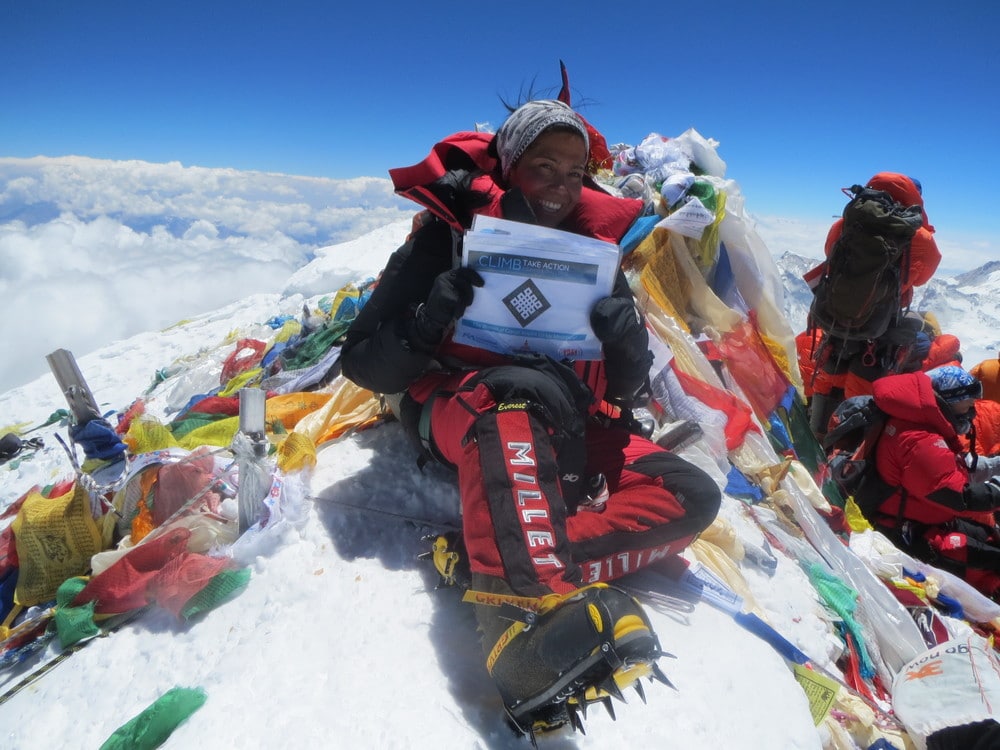 Georgina Miranda took an indoor rock climbing class at age 25. Today she has climbed six out of the seven highest mountain peaks in the world.

Why activism through climbing?

When I set the mission, I wasn’t a mountaineer. I didn’t know that I would fall in love with it as much as I did. It changed my life in so many ways. It also has taken on another meaning. As an entrepreneur, you climb a lot of mountains everyday. I tell everyone, “Everest has nothing on entrepreneurship.” The hardest mountain to climb is being a solo, female founder. My God, that’s an epic journey. [Laughs.]

This challenge [of climbing] gave me a voice to help me find this new level of confidence. It didn’t materialize until I set off on the journey. Thinking back as a kid, it’s like, “Whoa, did you ever think playing with the globe and watching these programs on TV — that you would actually be there? That you have worked up to the physical and mental ability to go?”

The other aspect is for women. We’re so often told things we should be or expectations as to certain milestones we should’ve hit in life by a certain time. There are women and girls all over the world that have big dreams. Maybe they’re starting at the same point I was at — a crazy place. There’s no direct path of how you’re going to get there.

I hope that it inspires other people to just go for it. And sometimes you might fail. Everest took two attempts. I collapsed five hours from the summit the first time. It was really gutting to fail being so close to a goal — waiting years. Then, putting the climbing project on hold to start a company. But you keep going. And to the women [rape survivors in Congo] that inspired me to start this in the first place — any mountain I climb will never compare to what they’ve gone through.

There are women all over the world that climb tremendous mountains everyday just to survive. That story still inspires me every single day. I hope that it encourages people to care more about other women.

Why do you think some women are such poor supporters of other women?

Women are care takers for their own families, for themselves, and their jobs. How much can you also take on from other people? I hear that a lot, “How much more can I do?”

Sometimes we don’t know how to best support each other. From an entrepreneurship standpoint: you’re trying to raise funding, recruit a new board member and key talent. You need to be associated with those having the best networks. Unfortunately, some of my biggest champions are still men, because they hold the access to the network.

Things start to shift when you start putting women in more positions of leadership. Then we’re much more empowered to help each other. Of course, we can be emotionally supportive, that counts for a lot too.

But when there are only a certain number of seats at the table — it becomes a competition as to who can get the one seat. The more you start to change the narrative; the more you will be collaborating to get multiple seats. 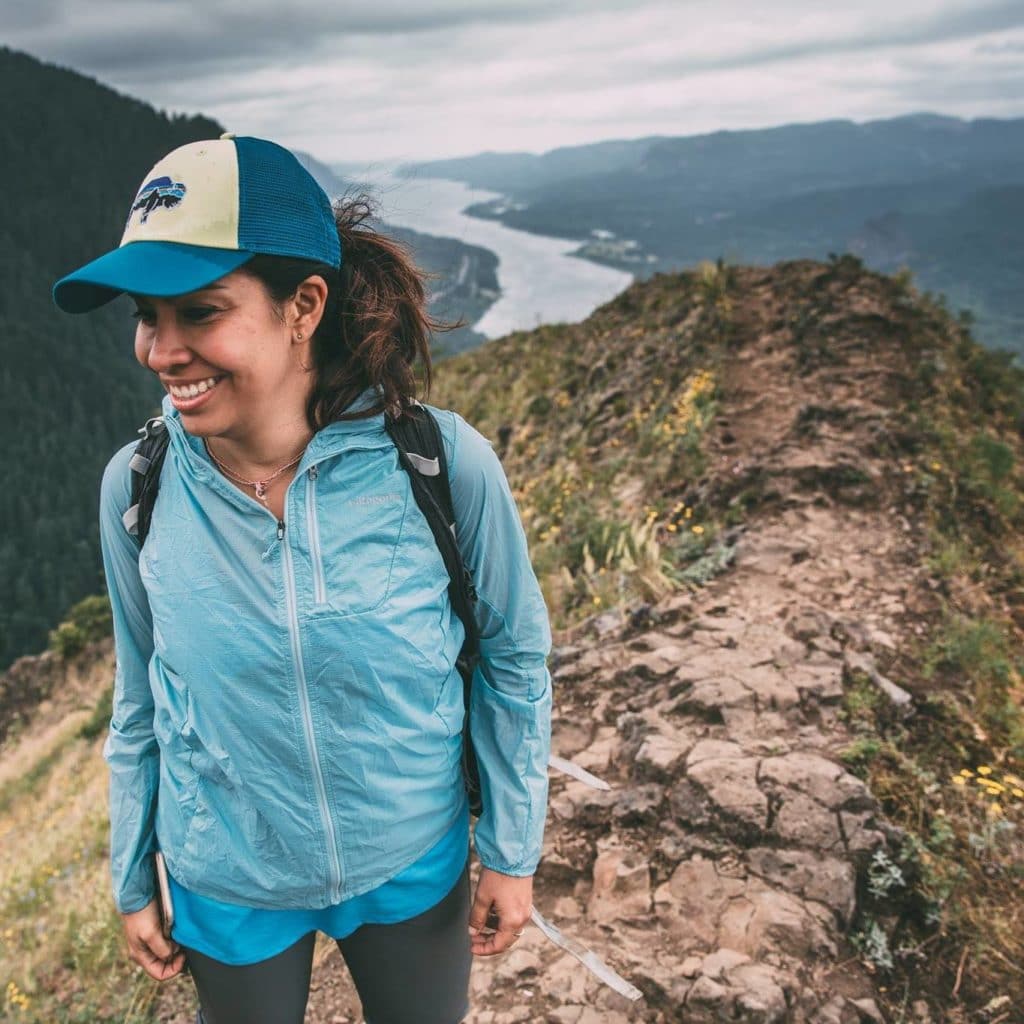 Give me a business challenge you faced and how you picked yourself up.

The first version of our company was launched as a curated e-commerce platform. There were so many learnings about that and about myself. I discovered my benefit to get more women outdoors adventuring and instilling that confidence. It wasn’t going to come from selling that jacket at the right price.

It was going to be around storytelling, around an experience. And, here are all the things you might need to go do that. Let us help you find those. That was a big shift, ‘cause it changed out the whole business model to a digital media platform.

Fundraising as a solo female founder has been extremely challenging. Maybe this translates to a lot of solo founders, because investors like seeing teams. But how many times can you hear the word no? It’s hard to hear no, but it really makes you go back, and think, “Why do I keep saying yes?” You have to wholeheartedly believe your answer. That’s what keeps you going past all the no.

You have to find your champions, it’s the person that’s investing their time because they believe in you and help gather folks that are going to give you support down the road.

Next for me is growing Altitude Seven digital media platform for women adventurers and travelers globally. Our goal is to become the leading destination for women around the world that want to get outdoors or on an adventure. We’d like to be that source of inspiration, information, and community. Also let them know how they can have impacts and give back to these places we love.

Personally is to finish the Explorers Grand Slam in the next 12 months. I would go to Papua New Guinea and head over to Antarctica. By December, climb Mount Benson, followed by skiing the last degree of the South Pole, and then end of March go to the North Pole.

It is not just a physical challenge, but I am trying to find sponsors too.

Since I set off on the hiking-climbing challenge, mindfulness and meditation has come into my life. Before I went back to Everest a second time, I found training your mind is equally important as training your body.

I completely underestimated how much patience was needed through this whole journey. Patience for not meeting my own climbing timeline as to where Altitude Seven would be — funding and team-wise.

I credit the mindfulness teachings and meditations helping me with the process. Eight years ago, I would go to yoga classes, and I would end up falling over, ‘cause I couldn’t shut my mind off. [Laughs.] I was like, “My god, I can’t sit here for an hour and not think!”

There are going to be things that are out of my control. Keeping a positive mindset and being patient is what is needed. Your poor little brain sometimes needs the time out. [Laughs.]

Sanna Grannas: Making a Mark with a New Brand, Runa