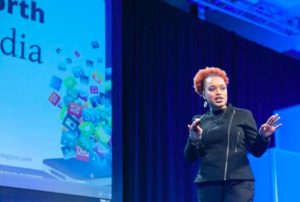 Crystal Washington is a technology strategist, speaker, and author of The Social Media WHY. She has worked with companies such as Google, Microsoft, and Kia Motors and has been interviewed by ABC, NBC, FOX, and CBS.

She shows how technology can empower the everyday person, whether it’s to connect with others, grow a business, earn extra cash, or simply make life easier. They only have to realize the potential that lies at their fingertips.

impactmania spoke with Crystal Washington about where social media and technology is heading, about speaking in Germany, and how to order a Christmas tree through an app!

I work with organizations that want to use technology to increase profits or productivity. It’s about connecting with people and making our lives easier. There are tons of brilliant people that are creating technology, and there are tons of resources for techie people. But everyday people are getting left behind; they’re walking around with smartphones and still just playing Candy Crush on them. They don’t know much power they have at their fingertips.

You’ve spoken at and worked with companies such as Microsoft and GE. Give me an example of what you taught them.

What I like to do is sneak in digestible tidbits. As much as we try to, at the end of the day, there is no separation between work and personal life. If you’re more efficient at home, you are free to focus better at work.

Give me an example of a tidbit you sneak in.

I talk a lot about efficiency apps. Right before we started talking, I used Postmates, a delivery service where you can do things like send someone to a restaurant with no delivery service to get you food.

I just ordered my Christmas tree on it. I was curious to see if I could send someone to the grocery store and have them strap a tree to the top of their car. They did it. The tree arrived before we got home!

I’m teaching busy people, “Okay, you feel like you’re behind at home, and you have to keep working hard to get the new client. Use some of these services.”

You don’t have to be super mom to look like super mom. You can send someone to wait in line at the store for the new iPhone, because you need to be in a client meeting. Showing women especially how we can use these tools is important, because a lot of us carry a lot of guilt and extra loads as a result.

If we have families, and we’re career people, you just have to get some of the stuff off your plate. I’ve actually had a woman come up to me with tears in her eyes over the tidbits she had used to make life easier at home.

What other tidbits do you have?

Apps can present income opportunities. We can make a little money on the side, using apps by doing deliveries or creating how-to-videos.

There’s a social network today, called live.me. Instead of likes on normal social media, they equate giving props to money. As much as you are appreciated, they put up a nickel, a quarter, or a dollar in, instead of a like. I met a gentleman whose 16-year-old-daughter has been using it since June. Between June and end of year, she made over $18,000 doing how-to-videos.

These are the things that I like to share with people. Technology has empowered the everyday person. Unfortunately, most of the information isn’t easily accessible or digestible. It’s not written for the average person. As a result, I consider myself a technology translator.

Do you have any insights on where technology, and especially social media, is going to take us?

Globalization is only going to become more and more entrenched. People are going to identify less and less with their nationalities, and more with global scale or local movements.

Innovation is constant when it comes to technology. We’re going to have a very strong battle between everyday people, who are currently being empowered by a lot of these things, and large corporations, which keep trying to get in on these things and usurp them. We’re going to see a greater fight to maintain these spaces for creativity and innovation, where you don’t have corporate conglomerates dominating the voice and vying for ownership.

We’ve seen this already with some of the major social networks. It’s going to become more of a focus in our world as people try to stay one step ahead.

What has been a surprising learning for you building your own business?

There have been two surprises.

I had to learn discernment because I am one of those people who wants to take everyone at face value. If someone says, “I can do this, let’s partner on this, and I will do this piece…” Initially, I trust them. I had to learn the hard way to be discerning.

The other thing that is surprising, and this feeds into technology, is how easy it is to create and build your business with different websites and apps in which you can hire people. This puts it at our fingertips. Twenty years ago, it took so much more to start a business. You can do almost all of it online with a small budget. I started my business with less than $130.

What has been a challenge for you in your business?

When you’re building a business, you meet people who mean well, but they may not share your vision. You have to be very careful; especially women, we tend to be more intuitive, inclusive and collaborative. You have to be careful not to steer off track. Potential collaborators might have bright ideas, but it may not be what you want.

What insights do you have for fellow entrepreneurs?

Relationships are everything. The best source of business for most of us are referrals, because you’re not spending as much time trying to convert them. On top of that, they value you, so they are going to pay more than someone that you’re begging to do business with.

Invest money and time in relationships. Make the relationship memorable. Do things that help them remember that you care, that you think about them. I learned this in sales before I had a business.

I would almost always get the contract against my competition, because I would hand-make little gift baskets for clients. It would always be specialized. For example, one company dealt with waste. I found a little remote control trash truck and decorated it with their logo. I put all of her favorite items in this truck, went to her office building, stood around the corner and rolled it into her space. [Laughs.]

When they see that you’re thoughtful and specializing things for them, they never forget. When you’re investing in relationships sometimes those people might help you immediately. But I’ve also had relationships that made a massive financial impact on my business ten years later, when I might have thought they had forgotten about me.

Technology is important and a lot of technology can help us with relationships, but it’s always about the people.

I actually have three people.

Antonio Thornton used to tell me, “You’re making things too hard, just do it.” Don’t wait for things to be perfect, just do it.

He did a project with me once where he announced, “We’re creating an information product.” This was on a Monday. He said, “On Tuesday, you need to have the outline; Wednesday, we’re going to record it; and you’ll be able to sell it on Friday.” I was like, “Wait, what — what are you talking about?” We did it. I won’t say it was effortless, but it felt effortless and we had the knowledge, so we were able to put it into place.

The second person is Karen McCullough. She is a professional speaker on branding and the generations. She made a huge impact on my speaking career, getting me through some doors. She’s the one who taught me the value of going above and beyond, always.

Whatever the client is asking for, you always give them 20 percent more. Whatever time you’re supposed to be there, you’ll be there 15 minutes earlier. I’ve seen that mindset, how that’s not normal, and how much of an impact that makes.

The last person is Hitaji Aziz. She has made a huge impact on my business. She’s the person who taught me that whatever personal things you’re dealing with, will come out in your business in some shape, form, or fashion. If you have low self-esteem, you’re probably going to have a hard time negotiating, even if you have great products. If you have a hard time saying no to family and friends you’re going to have clients that run over you.

She gave me a holistic approach to business. If I hadn’t been under her wings, I wouldn’t be where I’m today. Working through my own things made my business run much smoother and as a result, the way I interact with people is smooth and respectful. I’m comfortable with saying No. I’m also comfortable asking and knowing that the other person has a right to say No.

What specifically where you struggling with?

My family said to always be nice, which sounds like a good thing, right? But nice is different than honest. There can be a nice out of fear. There are times when you have to put your foot down which takes guts. That was probably the biggest thing Hitaji helped me with; I don’t always have to be nice. It’s more important for me to be respectful and real. Respectful can mean telling the truth. That might be saying, “No, what you’re saying is not going to work. Here’s how we need to do it right now.”

With speaking engagements internationally, do you see localization and translation being less of an issue now?

It’s becoming less of an issue. I do know speakers that have translators. I choose to only speak in countries where one of the main languages is English, just because of the way that I deliver information and the way that I use humor. I try to deliver an experience.

It is becoming a smaller world with social media. The international speaking engagements all came to me through social media, “I saw this video, I saw you talk about this, I think you’d be perfect for this conference.” The people from Germany found me on YouTube. They were looking for a speaker that could speak on social media in the United States. 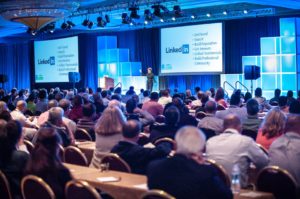 Crystal Washington speaking about the power of social media

When I went over to Dusseldorf, there were about 20 speakers. All of the other speakers were middle-aged Caucasian European males. And me. [Laughs.] I’m the only one from the United States that was a Gen-Y and black as well. I felt like I was their magic creature. I’m engaging; I know that I deserve the opportunity. But, I’m pretty sure at the same time, I hit every diversity aspect that you can think of. [Laughs.] They’re like, “Yes, and on top of it, check, check, check.” [Laughs.]

If you had to distill your journey so far into a social media post with an image and a few words, what would that look like?

The picture would have to be a brain being blown up…I could never have imagined being where I am right now. It’s been a crazy journey. The post itself would be short enough to fit on Twitter and would be something like: “Follow your gut, observe the world around you, create value.”