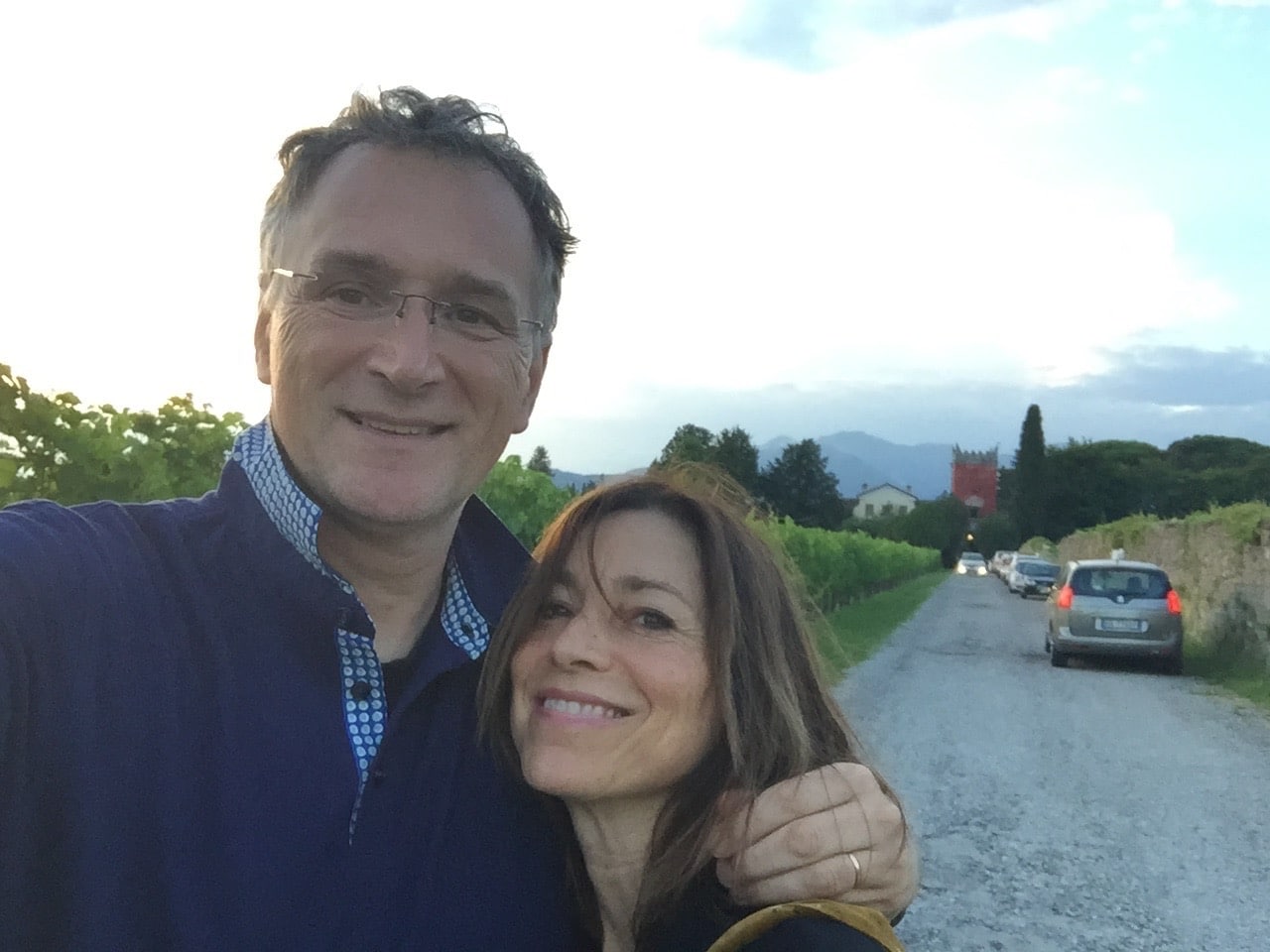 Paola worked at the United Nations Secretariat as the Assistant to the Assistant Secretary General for Public Information, and in the NGOs Office of the same department. With her husband, Mauro Ferrari, [President and CEO of the Houston Methodist Research Institute, and Executive Vice President of the Houston Methodist Hospital System] she founded L’Accademia di Gagliato delle NanoScienze. The organization invites scientist to meet and work to revitalize the community in a small village in the most disadvantaged part of Italy, Calabria.

We spoke while Paola was in transit leaving the floods caused by hurricane Harvey in Houston, Texas.

Paola, this was not the reason why we are speaking today, although connected to your work with communities. With what thought did you leave Houston, Texas?

I’m wearing on my wrist the bright colored paper bracelet that was handed out to identify the volunteers that got to the George R. Brown Convention Center set up by the city of Houston to welcome displaced people.

I want the bracelet to be a constant reminder of a situation that brought in unimaginable devastation to a huge population.

On Monday, there were a handful of volunteers looking at each other saying, “Is this the place where we go and help others?” And just the next day, the line of volunteers went all around the four corners of the building. When misery strikes, incredible solidarity, and the bigness of the human heart shine beautifully. It has been heartwarming. I left with these thoughts in mind.

With your husband, Dr. Mauro Ferrari, you founded L’Accademia di Gagliato delle NanoScienze, and then last November you started another nonprofit, Nuati, based in New York. What have you seen that is concerning regarding urbanization?

L’Accademia di Gagliato was established in Calabria, a region where 59,7 percent of the under-25 year olds are unemployed. The town’s population declined from several thousand people to just 400 in the last couple of decades. What we saw in this small town was what globalization tendencies are bringing to small communities: abandonment and neglect.

My husband was setting up a biomedical engineering program at a new university, Magna Graecia, in Catanzaro, which is less than an hour away from the town — we fell in love with the village. Since 2008, we’ve been inviting scientists from other disciplines and from all over the world to this small town. The bringing of creative minds has revitalized the town. It is now setting an example for potentially other small towns that experienced a loss of purpose and hope for the future. We felt very honored and humbled when Gagliato, because of the rejuvenation brought about by our science festival, got mentioned in the UNESCO Global Report presented at the important conference in Quito of UN Habitat III last October 2016, as an example of a ‘creative town’. [Report page 219.]

By reversing the flow of people and interest toward this little center, we showed that there are so many great attractors and they come from small communities like this one. Quality of life is after all very high, and people don’t need to be particularly wealthy to enjoy what really makes life valuable and good: family, friendship, great food, opportunity for socializing — interaction.

With a flock of outsiders descending only once a year you were able to revitalize the town?

Yeah. When we arrived ten years ago, what really struck me the most was this kind of depression and melancholy that you could see on people’s faces. There was an atmosphere of everybody fighting with each other. There was no cooperation, no common projects. Once people saw that there is value in their little place, the community came forward to assist us with the implementation of this annual event. Something in the morale of the town changed. It was a trigger for cooperation and coordination among especially the young people. They started building associations with cultural purposes and started new businesses. It was a transformation of despair and lack of hope to one of optimism and energy and collaborative spirit. To me, it was the most enduring and most fabulous outcome of what we did. 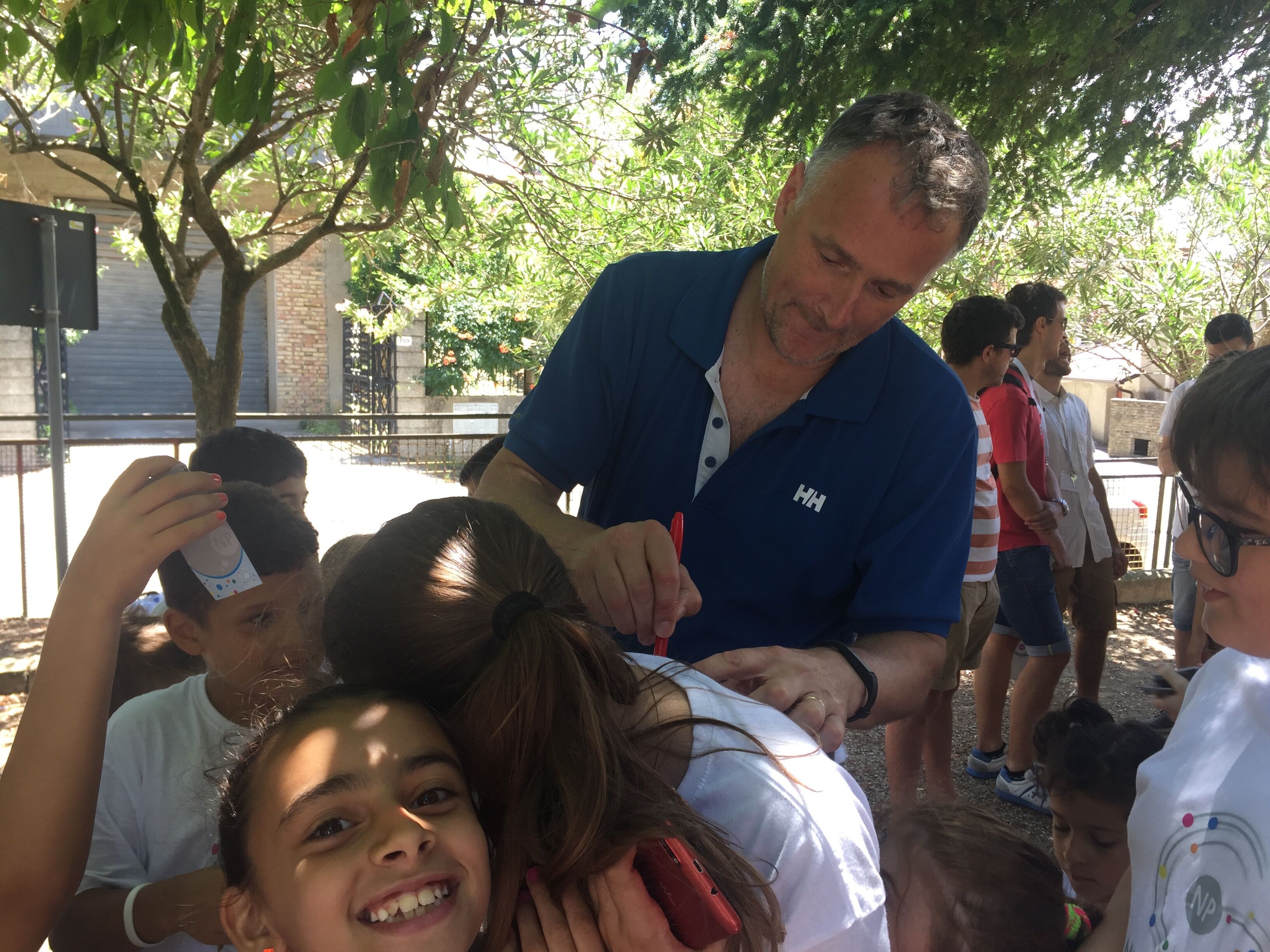 Dr. Mauro Ferrari signing trading cards and t-shirts at the end of a Q&A session between NanoPiccola students and the senior scientist that participate in the annual conference.

What are some of the practical solutions to set off a change in morale?

For example, the scientists who came held their own scientific meeting, but parallel to that we have an academy for children. The scientists have opportunities to interact with the children of the village. These scientists and their global work inspire the kids. We have trading cards, one for each scientist, so the children collect them and get them autographed. They put them in an album and follow the scientists online. Once a month, we realize a virtual connection between the kids in the town and the scientists from other centers of research that we are partnered with. So once a month, they get to meet with their new friends and get updated on the frontier of research. It’s a phenomenal exchange.

And then, we have a great town hall style meeting with the scientist population of the town who get to hear from the scientist on the most recent and most promising advances of medicine. Co-production is the key word for us.

Give me an example how you promote the UN Sustainable Development Goals (SDG)?

With NUATI, which stands for New Urban Agenda Translational Initiative, we organized a workshop that we called NUATI 1. Six senior urbanists and city planners from institutions such as the London School of Economics came to Gagliato with about 40 graduate students. During a workshop they investigated the situation in the town. They had beautiful ways to listen to the people of the village and did several interviews with the local population. The villagers expressed their desires and vision for the town. In return, the students and the professor translated the ideas and hopes for the future into actual projects and activities.

For example, the town has a problem of roofs that are made out of asbestos. This is a major environmental issue that they could not tackle for many reasons. The students offered a way to tear them down and turn these open spaces into artistic projects. Everybody said, “This is great. Why don’t we start doing this?”

An advisory committee is being formed, including some of the outstanding researchers. They will assist the local leaders carry out these solution-driven projects around town. The group also includes urban innovators to make sure that challenges can be properly addressed.

It is an ongoing relationship, versus just a one off. We are also not trying to parachute in solutions. All the ideas came from listening to the people of the village; these are their needs, their hopes, and their aspirations.

What have you learned that could be replicated in other communities?

The main point of this venture was this congregation of scientists that worked on health. So the focus is on health for small communities. We identified a village that ironically has the name of Med, India. They are part of a network of villages working with Jaipur Rugs and Jaipur Rugs Foundation. And so with our scientists, physicians, and administrators, we’re trying to figure out what the challenges are of a small community, especially the ones that have to do with women’s health.

One of our physicians offered what she called the ‘Preventative Box’. So it’s a small box, and in it there are some medical devices, like glucose and blood pressure measurers and other small devices. The box comes with individual forms so each person can record their vital signs or other measurement of health. It is to be kept in places where there’s a healthcare provider that’s trained and can help a small population that has no easy access to a clinic or hospital.

With all these ventures, what has been a surprising learning for you?

One of the biggest surprises has been that one of the qualities that you need, as a person with a vision and some leadership and ambition, is persistence. I cannot tell you how many times we had to deal with red tape. In this little community where the administration and regulatory system appears to be small, but can be really obstinate in preventing any change for the well being of the community. You have to keep on rolling. It took us eight years to get to the point where I feel like this village has a total sense of ownership for their future.

Well, my husband would say I’m very obstinate. [Laughs.] I was born under the sign of the Taurus, which now should make perfect sense. [Laughs.]

I have a large degree of flexibility and there are some pursuits where you have to step back and ask yourself, “Why am I doing this? Is there any egotistical source for going after this venture?” You need to let go of those ventures.

When I saw the children of the village, and the incredible impact we had, I couldn’t just let go. Even with the objection of some parts of the town at times or with the bureaucratic hurdles…I could read in the eyes of the children, the enthusiasm. Their perspectives and horizons have opened so much. They are certainly worth the hurdles we faced.

The town’s NanoPiccola’s participants learning about nanoscience with experiments and hands-on activities taught by trained students.

Absolutely. We should not use the verb of the future because it’s already been changing our lives. Nanotechnology is nothing else but a platform. It gives an ability to manipulate matter at the dimension of one billionth of a meter. The impact goes across all disciplines.

The nanoscale is already at work in the software of the phones we carry around. Perhaps the area where the change might be most important is in medicine. My husband published an article on the March 2016 issue of the prestigious Nature Biotechnology about his discovery of a new pharmacological device that has been curing 50 percent of the mice with metastatic cancer, that is the consequence of triple negative breast cancer. Metastatic cancer, as of today, has no cure at all. And it is responsible for 90 percent of all cancer-related deaths. The possibility that this drug, which is of a nano-formulation, can eradicate the death sentence that comes from metastatic cancer would have humongous impact.

What is next for you, Paola?

I was in New York and met phenomenal women that are part of this incredible sisterhood called the BWP. It was established in 1919. There are more than 25,000 members in more than 100 countries. I met with the national leadership of the United States and they asked me if I could start a Houston chapter.

This suggestion came when I was in New York delivering a talk, while in Houston, a transplant surgeon, [Sherilyn Gordon-Burroughs] one of only two African-American transplant surgeons in the United States, was killed at home by her husband.

No one knew of the violence that was happening in her home. Domestic violence carries a heavy stigma, and the careers of these women can be completely destroyed by a disclosure of a situation like this. That’s why they do not come forward. They remain silent, sometimes with fatal outcomes.

Sherilyn’s boss, Chief of Surgery at Houston Methodist Hospital, Barbara Bass, will lead a panel organized by BPW-Houston dedicated to the memory of Sherilyn. We are going to bring attention to this issue, and see if there are any tools or even legislation that can help professional women find a voice and protection against intimate partnership violence.