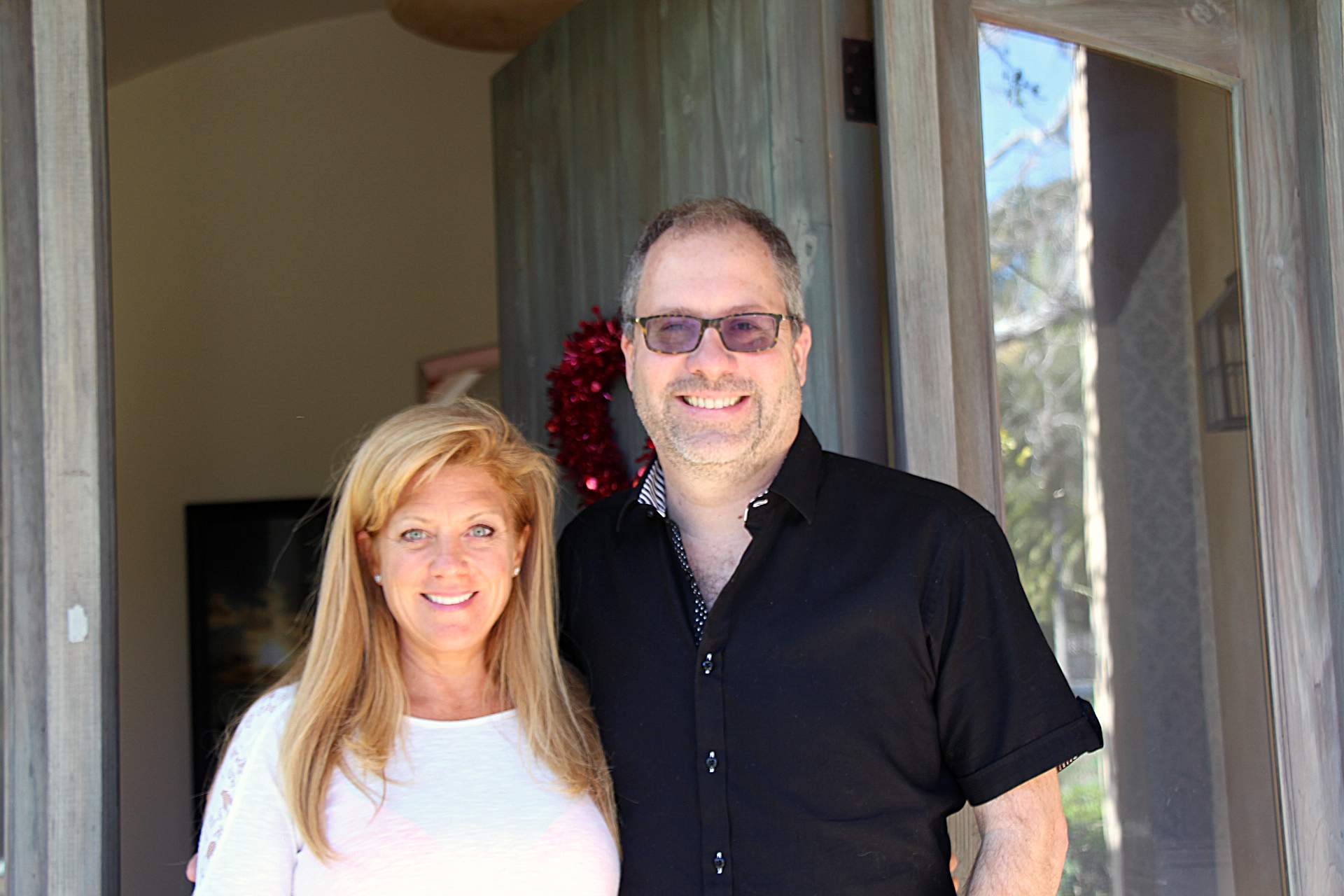 Fred Toye, with wife Sandy, at their home in Santa Barbara, California.

Los Angeles native Fred Toye, has made a promising career in the film industry over the past 25 years as an editor, producer and award-winning director for a variety of primetime television shows, including the CBS science fiction crime drama series Person of Interest, and Fox series Fringe.

Toye’s current projects include the critically acclaimed legal and political drama, The Good Wife, that will air its final episode on May 8, 2016, recently completed 11.22.63, a Stephen King mini series with James Franco and Chris Cooper, and an upcoming HBO series Westworld, with Anthony Hopkins, Ed Harris and Jeffrey Wright . He has also worked on the acclaimed ABC series Alias and Lost, and the CBS series CSI: New York and Ghost Whisperer.

Calm spoken and bright-eyed, Toye, was surprisingly alert even after working a 13 hour shoot in New York the day before for the popular, The Good Wife. Back at home in Santa Barbara, California, he shared his views on the film industry with impactmania.

The gracious and talented television veteran discussed his education at UC Santa Barbara, and his growth to what it takes to be in the director’s chair in an ever evolving and competitive industry.

Toye’s interest in the arts began in high school and was quite unexpected. It happened one day as he was walking past the school auditorium, when on a whim he stopped near the entrance of the theater and decided to audition for the school play, Cyrano de Bergerac, a classic romantic comedy written by Edmond Rostand in the late 1800’s. He continued to act in plays through his senior year and in college where he majored in Film and Media Studies at the University of California, Santa Barbara.

I was so proud to be part of the UC Santa Barbara Film Studies Department, because I learned so much there. We had such a great program. A lot of the faculty is still there, and having contact with them is just really fun for me.

“The UCSB Film Studies program was really set up around an education of the entirety of the filmmaking community. It was film theory school so we were learning about the film process and the impact that different genres have on different people and that was really critical for me now,” Toye said. “Had I been in a program where it was all about learning how to load a camera, and knowing what lenses to use, it wouldn’t have had nearly the impact on me that UC Santa Barbara did, because things like lens choices, or things that you learn on the job, that’s a craft. So, I credit my experience at UC Santa Barbara for ultimately how I have behave as a storyteller today. In terms of what I was interested in doing, I had always wanted to make movies, and I have had the opportunity now, growing through television to be able to make larger scale projects that are much like movies.”

Started from the Bottom

Toye, like most entering the highly competitive field, started at the bottom of the film industry in Hollywood, playing hookey from school to work on films as a production assistant running errands on movie sets for six years before moving on to work as visual effects coordinator. His hard work led to a promotion as an on set visual effects supervisor where he worked closely with the editorial department.

“At the time I was trying to decide what would be better for my education as a storyteller, to work on sets as a visual effects person, or a choreographer or editing. My hero filmmaker was a guy named David Lean (director of Lawrence of Arabia and Doctor Zhivago), who was an editor and he became a great filmmaker, so I thought editing would be a better choice for me,” he said. “I began work as an apprentice film editor, and I worked as an editor for about 15 years before I started directing.”

Toye’s directorial debut occurred in 2002, when he wrote and directed a 27-minute short film called Lost, starring Bodhi Elfman and Scarlett Chorvat, where he took a leap of faith by mortgaging his house to make the film.

“I decided that I was going to do something unexpected for me. I was going to push the boundaries of my creativity and I was going to do everything in my power to make the best film that I could make,” said Toye. “Regardless of the outcome, it was just the fact that I did it. Of course, I had expectations that it was going to win the Sundance Film Festival, which it didn’t but that didn’t matter ultimately speaking.

Now, 16 years since I made the film, I can say that it was just the experience of pushing yourself beyond what you think you can do – going that extra mile on your own and traveling a road you didn’t expect to travel that changes you in a very positive way.”

A transition from feature filmmaking to television primetime was a natural fit that opened up many directorial opportunities to enhance his creativity in visual storytelling. He’s directed episodes of Brothers and Sisters, The 4400, V, and Falling Skies, among other series.

When asked what he has learned over the years as a director, writer and producer in filmmaking, Toye replied, “I’ve learned that the world is an incredible place, and the variety and diversity of people that are out there is amazing and fascinating.

Having the opportunity to interact with so many enthusiastic and creative people makes me inspired about who we are as a people, and I think that being a filmmaker brings me closer to humanity in a way that I probably wouldn’t of had if I were involved in some corporate environment, or another field.

And you get a window into humanity that you don’t get on a daily basis in other places.

My lesson has been to value, and to adore and enjoy the company of people.”

You are currently directing the final series episodes for The Good Wife. What other projects are in the works?

“I just recently completed 11.22.63, a Stephen King mini series with James Franco and Chris Cooper, and I’m currently working on another series for HBO called Westworld, with Anthony Hopkins, Ed Harris and Jeffrey Wright that will be airing towards the end of the summer.

I love telling a closed in story of seven or eight episodes of a television series, and I feel like, creatively speaking, television is really great right now because there is so much creativity pouring into the television industry, and I think that I’m very fortunate and proud to be part of it.

I’m interested in just continuing to do television projects that are really pushing the boundaries of storytelling, which I think is happening more in television now than in features.”

What is your favorite part of storytelling?

“Looking back now, from the time that I was in high school and college at UC Santa Barbara, thinking about what interested me about storytelling, I can say that now I think that working with actors is probably my favorite part of storytelling.

I love to work with actors. I think it’s really, really fun. The magic that they bring to storytelling is incalculable, because you have an idea in your head, as a storyteller, of how you want to tell a story. And what exactly you want to say.

Always better, always more enhanced…when the actors come, when I get to work with them, that’s where it sort of explodes into something bigger and greater.

And so, I think that working with actors is my favorite part of being a film maker. What happens in the process of creating a story, and working with actors, is that when you have an idea, and a story that you want to tell, and a picture in your head of what a character might be, it lives only in just one particular plane of creativity until the actor comes in and brings their own sensibility to it.

So, for example, the mini series that I worked on, which is 11.22.63. That role, Jake Epping is the character name, was given to James Franco. And none of us knew before we started the project what he would bring.

It wasn’t until we showed up on the day with James, and saw what he brought to the project. And what we got, was I think, incredible.

And we were all very pleased with that. He was in every single scene in that mini series.

We were all completely blown by his performance, and we couldn’t have predicted it.

I think that’s the case with all performers and things that I work on, is that when the actors show up they bring themselves. And when you get to see that, it is really magical.”