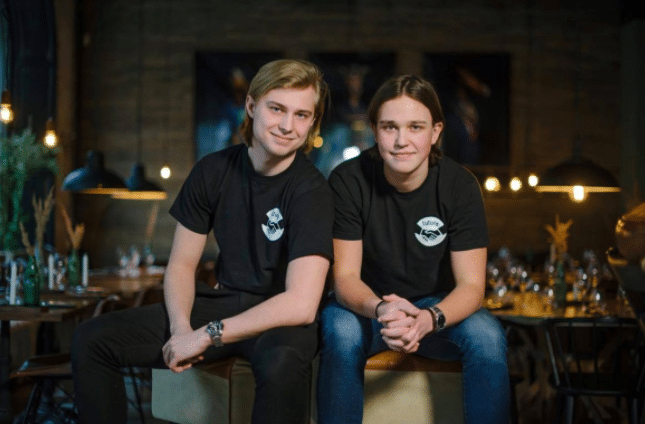 Ludvig Berggren is son of Jonas Berggren who was also interviewed for his startup Nordic Innovative Health AB.

Both Charlie and Ludvig began their business six months ago at 17 and 18 years of age. They are in their final year of studies in social science and entrepreneurship at Skvaderns gymnasieskola, Sundsvall, Sweden. This pre-business study supports students in creating business ideas for school credit and life experience. If the business idea is important to them, they can take it into their college studies and build their career from there.

You guys are on fire. Your idea puts you in the middle of the immigration integration issue here in Sweden. Sweden, like Germany, has opened their doors to refugees like no other. How did you begin your startup considering the complexity and challenges around this issue in Europe?

During 2015 an enormous amount of people searched for asylum in Sweden. We became one of two countries in the European Union, Germany and Sweden, who kept their borders open.

When refugees, or asylum seekers, first arrived in Sweden, we wondered what their next steps would be? Swedish politics is full of conversations about the border remaining open or not, but we hear no conversation about what people will do once they get here.

We found that 163,000 people requested asylum, approximately 35,000 received the residency permit while others remain in process — this is a large amount of people for a small and previously relatively isolated country. The status of the majority of the asylum seekers have not been decided upon.

Through a Swedish statistics platform and the Swedish Integration (Immigration) Agency research we found an interesting statistic. Half of the Swedish immigrants studied, it took approximately nine years to get any kind of employment. While the Swedish government offers businesses that hires immigrants a 70 percent coverage of their salary. We wanted to know what the hold up was.

What led to your solutions?

We were in Class 3 (a grade immediately prior university-level) taking business building courses. We were considering several ideas, but because this issue concerns every citizen of Sweden, we decided this was the issue to work on. We looked at why it takes 50 percent of the asylum seekers, approximately nine years, to find employment.

According to further research, Swedish companies are not seeing the 70 percent salary coverage as an attractive deal. Why? The deals seem very generous, so what’s the problem?

The government deals might have been, or appeared, too difficult to engage with or perhaps the companies were too busy to address the process.

We took the information needed to apply for the salary coverage, made it easy to understand. We assigned ourselves to be representatives of the company and the immigrants. We stood as the go betweens. We took our approach to companies, testing, and explaining how it works. We met with immigrants to work with and begin teaching them an approach. We honed our process.

The Swedish Integration Agency has a list of companies interested in hiring, we made the distance between the companies and the immigrant hires shorter, easier.

Wonderful idea and plan. Can you tell us where you are in the timeline of your plan?

We have been working on this particular business idea and plan for half a year. However, we began idea generating, designing, planning, and implementing a year ago. We decided on this particular approach and named it Futura Integration (integration meaning immigrant in Sweden). We were initially optimistic about the timeline, everything has taken longer than we expected, the relationship with the government authorities took us awhile to work through.

But today we have a solid groundwork in place, we have companies interested, and we’re moving forward with confidence. This will be a our work for some time now.

What is your current monetizing model?

We have a calculation model, for types of businesses, numbers of people hired, etc. A part of our monetization is a marketing fee as we bring the company to the world, sharing and showing their great work. If this story is heard and seen we believe others will want to join in.

What has been the surprising learning from this experience?

Others see us as young entrepreneurs with something to contribute. This is a norm for the new world.

Thank you for this interview, you are inspiring. We will be introducing you to a few contacts we have that will hopefully move your important work forward!

Living in the Creative Zone, Transforming the World One Idea at a Time is a collection of interviews with international figures driving change forward through purpose and passion projects. For the next year these interviews will publish on the impactmania platform, Jody Turner’s complete e-book is available in 2018.