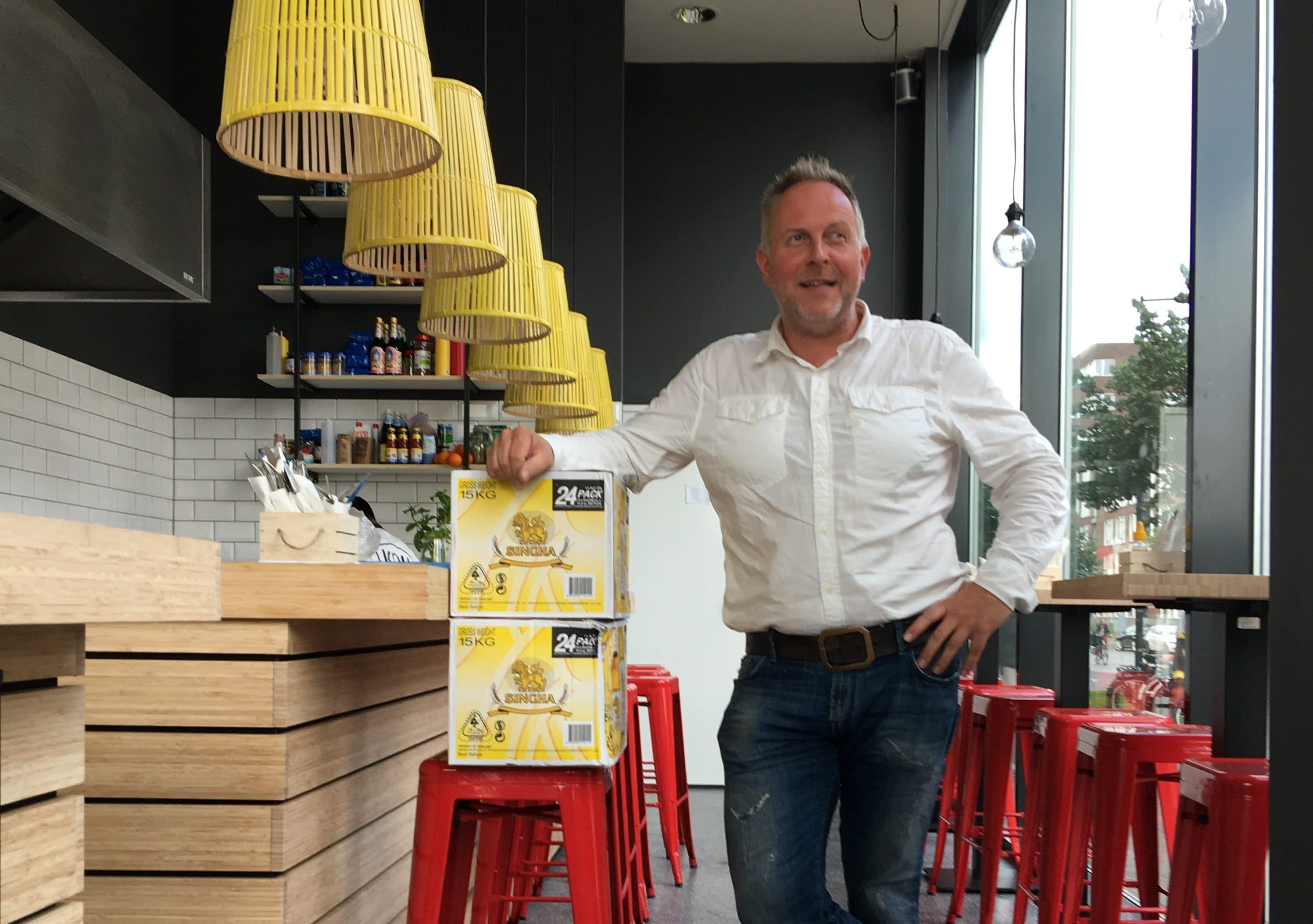 For the last eight years, Jansen and his friends felt a Thai place was lacking from the hip neighborhood. So after all the talking, he opened one. The retail advisor for Dutch entities such as Albert Cuyp Market, a shopping area in De Pijp Amsterdam, and a collective of flower growers with more than 2,500 members, is now also a shop owner — something that was in his DNA all along.

Marcel talks to impactmania about the importance of reviving small stores and markets in order to bring local flavor and story back to the streets.

What’s happening to the shopping streets in Amsterdam?

Online shopping is taking over. Besides that, there’s also a change of the type of customers. A lot of small-scale shops disappeared.

With that, the whole city is getting boring, because it’s only the big high street chains that are surviving. With the increase of the cost of rent, etc., it’s not affordable for small shops.

What you see — whether in Amsterdam or Brussels — the city is losing its identity. You see chains and coffee shops and ice cream stores taking over the streets.

In Amsterdam, locals say they don’t get into the center any longer because it’s too busy and boring because everything is the same. But a tourist, actually, wants a local feel; they are looking for a local touch. But that local touch is disappearing.

If this continues, the tourists will disappear.

I work for some of the bigger management groups of shopping centers, and they are starting to understand that they need this special touch of local and creative entrepreneurs.

We need to create areas for small-scale shops. People like shops with a soul where someone with passion is selling maybe just one single product made with craftsmanship.

What you see now is also more hybrid shops.

It’s not just one product, but it’s a strange mix of different products focusing on a specific group, for example, the personal taste level of the owner. So, the owner sells only the things he or she likes; it’s a good way, also, to sell.

Do you have an example of a shop that is a good model of the new shopping experience?

Hutspot — where they sell wine, they have a barber, they sell clothing, some gadgets, and also some interior design — their focus is that they want to help local designers that are not able to develop a huge collection. These shops offer shelf space.

You advised a popular Amsterdam market, Albert Cuyp. What is the function of a market?

The function for the public market is really a place to meet. If you hear people talk about markets, it’s about the products, but the main thing is that it’s a meeting place.

You see that adding a market to a local shopping center, for example, is a way to attract a new public. The problem is that many shop owners think it’s a threat. We have proof that at certain places it’s the other way around because you make the whole center more relevant.

In some areas like in the south of Holland you have a lot of smaller cities. And they attract tourism. They offer new jobs in that area.

Another Dutch phenomenon is the flower collective you advise.

Holland is the land of flowers. Small-scale growers, with one or few hectares, with all different flowers, export all over the world within one or two days.

There’s a really small-scale distribution system with two markets: the traditional florist shop at the corner and increasing supermarkets that are starting to sell a lot of flowers.

For an individual grower, you cannot really work with these supermarkets. Most of the smaller growers rely on the small-scale shops, which is still a big part of the market. But again, here is the same problem — the smaller florist is disappearing.

If you just supply supermarkets, you are looking at very small margins. It’s actually only possible for really large-scale growers or co-operatives to supply the supermarkets.

The average grower needs the florist to survive. The problem is that one single grower, mainly, is growing one or two products. But the florist, of course, has a wide collection of different flowers.

Growers are growing their product and then they go to the auction. Then for them, it’s a kind of wonderland what’s happening there.

For a single grower, it doesn’t make any sense to promote their products individually because they’re not big enough or a brand. What you see is — a lot of these growers that are growing the same product — they merged together as a kind of promotion organization. I helped create a kind of brand for that product, so they all have a kind of mutual goal and a mutual message to the markets. Simply Calla.

What is the objective of this collective?

The main focus is the florist, to inspire and to help them build their business. Through the florist we reach the consumer with specific products or with a specific story.

Most florists don’t agree, but bouquets in supermarkets are getting better. And also, their perceived value is increasing by the consumer. For example, Marks and Spencer’s in U.K. — it’s perceived [as having a] higher value than an average florist.

It’s important for the florist to focus on the market. The supermarket right around the corner is selling the same thing that you make. So, how do you make a difference?

We had 10 different product groups [flowers] to support that. It doesn’t make any sense to promote just your own product, because at the end, almost every flower ends up in a mixed bouquet.

So luckily, all these growers, they also understand this. So these 10 different groups, representing 120 growers, are now participating in the Simply Calla project.

I also work with growers in a bouquet details project, there are 2,500 growers participating.

What is your advice for a starting shop owner?

Create a proper plan or concept that gives direction; have a focus on where you are you going. It doesn’t have to be a big plan with a lot of the figures; it has to be kind of your passion or ideas, but at least make them tangible.

There are so many decisions to make, so a plan will help you. Try to use your network and see where you can get some help or feedback from people. That’s quite important. Of course you have to make your own decision, but it helps if you get some involvement from others.

You’ve had a lot of impact on many entrepreneurs, their shops, and their communities.

What I see with the markets, growers, shops … these are all quite conservative sectors. You have a lot of big advisory companies, but they are very corporate-driven.

I was born behind shopping counters. That helps.

What kind of shop?

Cheese, cheese, cheese [laughs], peanuts, and other delicacies. It [was] in Bleiswijk, close to Rotterdam.

No, it’s not there anymore.

It will come back with the boutique shopping revival.