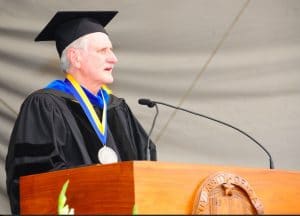 Below is the transcript of the address. This is part of the impactmania’s interview with Duncan Mellichamp.

Genetti: Dr. Mellichamp is a chemical engineer who earned his bachelor of science at Georgia Tech and his Ph.D. at Purdue University. He went on to become a research engineer with DuPont, but was recruited to UC Santa Barbara to help create the Department of Chemical Engineering in 1966. This

December will mark 50 years of his dedicated service to this campus.

Over the decades, Dr. Mellichamp has served on numerous boards and committees. He was Chair of the Academic Senate at UC Santa Barbara, and then for the entire University of California, and he has served on the UC Board of Regents.

Also, since 2003 he has held the position of Trustee of the UC Santa Barbara Foundation and in that role he chaired an advisory committee on Isla Vista, which produced a roadmap for positive change in that community, the results of which are visible today.

But Dr. Mellichamp’s impact does not even stop there. He and his wife Suzanne, a UCSB graduate alumna with a master’s in Education, have significantly focused their philanthropy on the UC Santa Barbara campus. They have endowed 13 faculty chairs, thus, in conversation with campus leadership, they have directly shaped the UCSB faculty. Currently, three areas are targeted for growth through these chairs: systems biology, globalization, and sustainable chemistry. The couple also actively supports half a dozen local arts groups, including Opera Santa Barbara.

Duncan Mellichamp Commencement Keynote at UC Santa Barbara, 2016. It’s there! Hold on!!! Must be there!! Nope, there! …Good Luck And Go Gauchos!