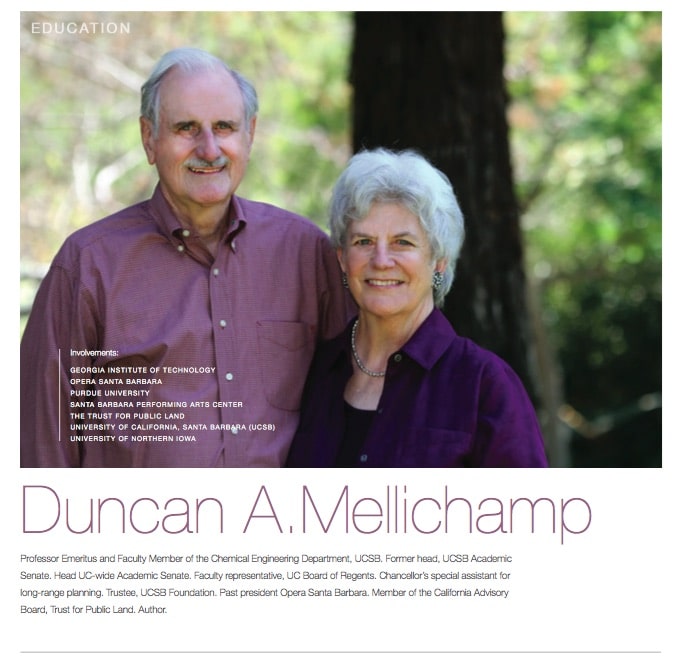 Duncan Mellichamp gave the 2016 commencement keynote address at University of California, Santa Barbara. Even if you did not graduate from UCSB, the transcript is an enjoyable read.

In 2006, the Mellichamps were awarded the Santa Barbara medal, UCSB’s highest honor, for their extraordinary contributions to the campus.

You and Suzanne endowed 13 chairs at UC Santa Barbara. What drove that decision?

At first, it was really quite selfishly motivated. I had put in 30-something years building a particular area of the program, and I didn’t want to see that disappear when I retired. So how to influence the department after you’re gone? Suzanne and I established an endowed chair in my own area to hire somebody who might continue the work.

That would explain one endowed chair; how about the other 12 that followed?

The other twelve came out of my long experience with the university. It was clear to me that if you really want to make things happen, you need to do several things: You need to bring in really good faculty; early in their careers when they have time and energy; you need to bring enough people in the same area that there’ll be concentration of effort; support them long enough to allow them to become self-sufficient. That’s why we set up these clusters. The faculty hired into these positions have turned out wonderfully.

As of 2013, there are three clusters: Systems Biology, Globalization, and Sustainability.

In addition to education and arts, you and Suzanne are involved in land conservation. Tell me a little about that.

One of my recent projects has been to advise on the Ocean Meadows Golf Course purchase by the Trust for Public Land, as it is conveyed to UCSB to restore and conserve as open space, in perpetuity.

I was significantly involved with the creation of the Ellwood-Devereux Open Space project [a preserve with 2.25 miles of coastline and 600 acres of open space] when I was working with the chancellor a dozen years ago. The golf course comprises about 60 additional acres at the north end of the Devereux Slough, destroyed in 1965 when the surrounding higher ground was bulldozed into the creek to make the course. Such an action, destroying a historical wetland, would not be allowed today and only seldom can be reversed.

Suzanne has long been interested in conservation. The first book we read after we were married was Rachel Carson’s Silent Spring. That book really started the conservation movement in this country, and the world, for that matter.

I finally had time to deal with some of those issues myself. Now, I’m thinking, what are we going to leave other people’s kids and grandkids? It just turned out that this is an area where we can make a difference, so we do that.

You have mentioned that Suzanne inspired you in the mission areas you support. Where else has she played a role?

Suzanne has been involved at each step. It was money she earned, over and above what we needed to live on during her 30-year career as a teacher, invested consistently and purposefully, that made our gift program possible. And Suzanne has worked with me – setting priorities, identifying donor organizations, and specifying programs to support and the level of gifts. I happily acknowledge our close collaboration in philanthropy, as in everything we are involved with.

Is giving part of the culture you grew up in?

I came out of a Southern culture, where people are still motivated by the religious beliefs that you give back 10 percent of what you earn. I never felt comfortable blindly giving 10 percent of our money away. There’s a better strategy: Maybe you should accumulate that 10 percent for years, until it really amounts to something and do something really meaningful with it.

That’s the sort of approach that we’ve taken. We didn’t give much away to anyone for many, many years. We basically just plowed everything into our investments.

Why do you give?

The idea of doing something with your life is an important concept for me. There are different types of people. You can almost put them into four categories: There are some people, users, who employ the resources of the Earth for their own purposes. And some abusers, people who misuse the resources. Then there are people who are builders, and people who are creators. I felt always I’d like to be on the building and creative end of things.

A lot of people would say, “What kind of Earth do you want? Do you want to have one where the maximum number of people can exist?” But there ought be some quality of life for people who are here 100 years from now, or 1,000 years from now.

In the last 10 years, people have gone in a different direction; the country has gone in a different direction. We are building essentially an oligarchy – if I can use that term – a very large oligarchy, consisting of many very powerful and wealthy families. I see many people who spend a lot of their time and efforts trying to preserve their estate and the power that can come with wealth for family members—which is not a bad thing to do, per se. But if everybody takes that perspective, then what is going to be left for… everybody else?

Oh, boy… we just have to last long enough to finish up some of the things we started! [Laughs]. I think we’ll just continue doing as much of what we’re doing. To stay active, that’s great, but I’m very happy to see other people take over from time to time.

One of the main reasons for our giving program at UCSB is that I have a great deal of faith in the structure. The faculty continues to perform such a major role in the governance of the university; we built that key idea into the way these cluster chairs work. The whole new program is called the “Academic Initiative Professorships”. The idea is to take the institution in new directions, and how that institution, as represented by what the most active and successful faculty think is most important. So for us some of the fun is just watching to see what happens.

In September of 2012, Santa Barbara Beautiful awarded the couple the inaugural Griswold Award for Philanthropy for their many endeavors in the community.

This interview is part of the book Impact X. Photo of Duncan and Suzanne Mellichamp by Monie Photography.