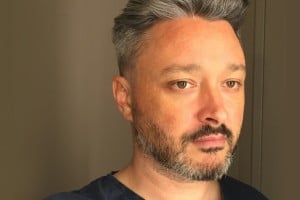 George Bolster (b. 1972, Cork, Ireland; lives in New York City) is an artist-in-residence at the Search for Extraterrestrial Intelligence (SETI) Institute in Mountain View, California.

This residency differs from a typical one because Bolster collaborates with leading scientists such as the SETI Institute’s Bernard M. Oliver Chair, Jill Tarter and Laurance Doyle who discovered Tatooine (Kepler-16b). They are part of the next-generation of explorers looking for life outside of planet Earth.

In our interview, Bolster spoke about his work Archive for an Unmade Narrative (2015-2016).

Does art always respond or react to something?

A lot of art doesn’t necessarily respond to anything. It has often to do with cultural constructions in the history of representation. What I do is more conceptual; I make art that addresses real problems or ideas. I try to shift the viewer’s perception of what they thought about the subject before experiencing my work.

Is art your way of leaving a legacy, like some people build companies, or others are into philanthropy?

I address this theme in the piece called Self Erosion (2013), which has to do with suicide. In it I pose the question: “Is art a way to be loved in some abstract way across time or a way to leave some impression across time?” There is an immortality associated with art. Considering the environmental situation we are in, how are we going to conserve all the art that’s been created, even the works created in the last century?

The new work that I’ve been working on with the Moon Museum and the McMoons archive project has to do with the idea that culture or even humanity is not infinite. We need to realize that we are impermanent, as are all art objects. Art is a mortal thing that we have to protect—in the same way that we need to protect our species.

Why is the McMoons archive project in a defunct McDonald’s in the NASA Ames Research Center?

I think that was the available building at the time. They nicknamed it McMoons because it contains the images of the mapping of the moon by five lunar orbits before the Apollo missions. 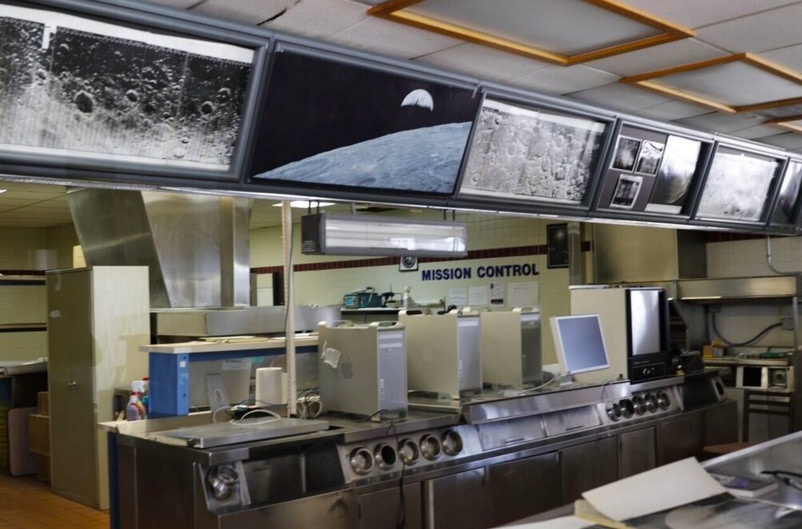 It was started and is managed by Dennis Wingo. Dennis was part of the LORIP Project, founded by SkyCorp and SpaceRef, to recover original images from the master tapes of the NASA Lunar Orbiter spacecraft. Nancy Evans, who was cofounder of the NASA Planetary Data System (PDS), donated the actual archive to McMoons.

It’s quite funny that the archive is in a defunct McDonald’s. It’s a very unusual sight. It also makes it visually fascinating because you’re looking at these incredible images at the height of technology at the time, being stored in a former fast food restaurant. The other reason the archive is in that building is because it is climate controlled and they can properly store the film and VHS tapes. 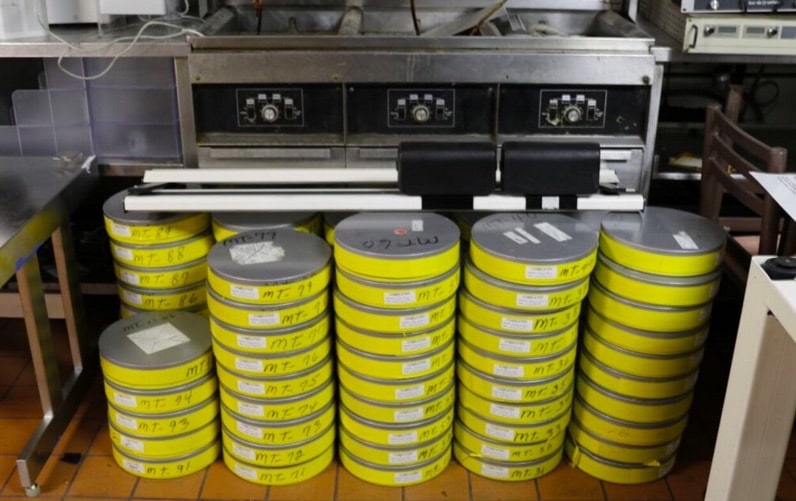 As the artist for this project, did you have free rein within set parameters, or did the scientists have ideas on how to visualize the project?

The program was founded between Jill Tarter and Charles Lindsay, the director of the program, who is also a fantastic artist. Curator Denise Markonish is the SETI AIR advisory committee. It’s a collaborative project. We have had numerous field trips to SETI, the Allen Telescope Array, in Hat Creek, which is the observatory, and NASA Ames. It’s a very open program. The artists can, based on different lectures from different scientists, find a subject they want to address and determine the way in which they want to address that subject.

Sometimes that happens through more philosophical or aesthetic means. Sometimes it’s more scientifically and research-based. I made three time-period film pieces, which address what we used to think, what we think in the present, and what we’re facing in the future. It blends sci-fi with documentary making.

I learned a lot about Robert Rauschenberg. I didn’t realize before I left that he was so involved with conservation, which is incredibly important to our collective future. He bought a lot of the land on Captiva Island, Florida to stop developers getting their hands on it. He kept most of it in its natural jungle state.

What did you learn about yourself?

I went there with a film piece in mind that I had been writing for a year. It was a very, very bleak subject. It was about my ex-partner, who died in 2010. It was an examination of depression. Once I arrived on the island, being in that unspoiled nature, it helped me gain a distance from that piece, and to finish it in a way that I wouldn’t have otherwise. Ultimately, it led to the next piece Un/natural History: Drowning Captiva, which was about saving and celebrating what we have in terms of our ecology.

Do you mean that the current SETI project is related to the film you made during the Rauschenberg Residency?

The previous film was called Unnatural History: Drowning Captiva (2014), Rauschenberg was invited by NASA in the ’60s to watch the Apollo 11 lift off. He was given access to NASA archives at that point. His Stoned Moon series was mostly based on the images from that archive. He started Experiments in Art and Technology (EAT) around this time, and then a project called the Moon Museum, which was a little ceramic wafer, the type used on the exterior of Apollo spacecraft. In collaboration with other artists, he printed drawings from Forrest Myers, Andy Warhol, Claes Oldenburg, John Chamberlain, and David Novros. They allegedly smuggled this aboard Apollo 12, so it is the first art object in space.

I was using that as material within the film to talk about this fascination with space, and the initial impulse to put a piece of culture into space. Also, the idea that we may not have any choice but to try and get to the next habitable planet in order to survive as a species. If we don’t survive, does culture survive—if there’s no one to interpret it? That became part of the film and how I ended up at SETI Institute. What I’m researching with McMoons is this idea of archival practice being a central impulse for saving culture.

What have you learned from Archive for an Unmade Narrative, (2016) this current project?

It’s early-days, but it has opened new, unknown fields to me. The scientists are so brilliant, generous, and humble. I was a nervous wreck after researching them. To meet people like Jill Tarter who is at the cutting edge of science, or Charles Lindsay, who has a major science background as well as art… Laurance Doyle is a totally amazing scientist who discovered Tatooine (the planet, not the fictional one from Star Wars!) The level of their research is extraordinary. It’s fantastic. It’s inspiring. There are a lot of cultural implications to the SETI’s research, but they’re at the forefront of trying to save us, really. 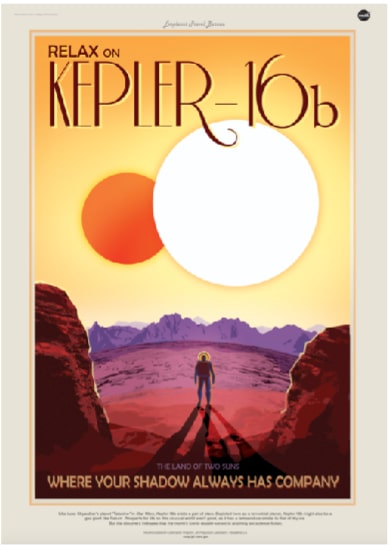 Laurance Doyle discovered the first planet to orbit around two suns — similar to the fictional planet in Star Wars, Tatooine.

What is the takeaway of the SETI art residency?

With all this work in the art world, who has made an imprint on your professional DNA?

SETI has had a huge impact on me as a person, and then also in terms of how I research. A lot of the art I’ve made was based around an idea, which I then narrowed down to one point. Since being there my work is now more like a narrative capable of having multiple points and opinions—often contrasting opinions to open up a field of questions as opposed to having one particular point.

With all the past research and your work as an artist, what do you think is needed for social impact?

A lot of the art I made was more aesthetic-based and aesthetically appealing. This more recent work is about ideas, and it’s about the conversation that can be sparked out of the ideas. A lot of people who’ve seen it said, “I didn’t really think of it in that way before—that we’re teetering on the edge of something we need to try to stop.” And what are you not good at?

You mean you are good at that, too?

All images courtesy of the artist, George Bolster.

George Bolster’s next show “Kenosis in the Supervoid” is at Station Independent Projects on Eldridge St., New York. It opens on April 8.

George Bolster’s “Archive for an Unmade Narrative” with Critical Practices Inc. and 21ST.PROJECTS runs from March 24 – April 22, 2016.
Viewing is by prior appointment only. For more information or to make an appointment to view the work, please contact: [email protected].