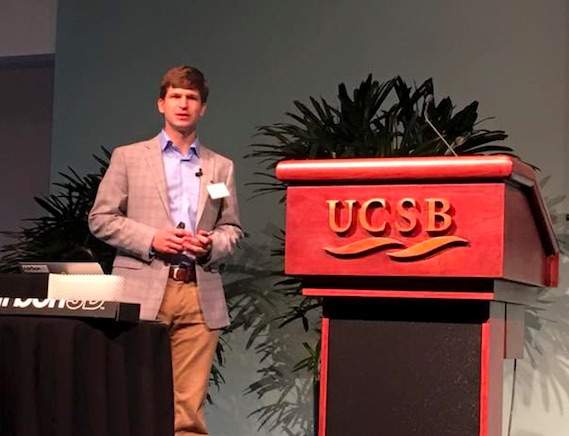 MROP was founded in 1999 to showcase research conducted at the MRL to industrial and venture partners. Prof. Ram Seshadri, co-director of the MRL, began the event with a description of the state of research and educational activities at the MRL. He emphasized how the MRL serves researchers on the south coast by providing state of the art instrumentation and facilities. Currently, the MRL is building a new Low-Temperature Characterization Facility, that will come online soon.

MROP stimulates collaboration between MRL researchers and faculty from science and engineering departments at UCSB. These interdisciplinary collaborations are the foundation for innovation at the MRL, which houses three main interdisciplinary research groups (IRG). The first session premiered the newest faculty member in the Materials Department, Prof. Daniel S. Gianola, who described his research on material deformation at the micro- and nanoscale for engineering the strength and ductility of structural materials. Other sessions included UCSB professors from Physics, Chemical Engineering, Mechanical Engineering as well as the Technology Management Program. Featured industrial partners included representatives from BASF, Intel, and Citrine Informatics.

MROP featured presentations from successful UCSB alumni including Dr. Justin Poelma of Carbon3D and Dr. Corey Hoven of Next Energy. Carbon3D is a Bay Area startup that is revolutionizing polymer-based 3D printing technology. Dr. Poelma was lauded “as an example of how the MRL prepares their students for success.” Next Energy Technology is a Santa Barbara startup that is developing transparent solar cells for installation in building windows. Dr. Hoven acknowledged the influence of UCSB’s Technology Management Program, which helped Next Energy get its start, as well as the enabling research developed at UCSB on semi-conducting organic molecules for solar cells.

Current research conducted at the MRL in IRG 1, a group that works to understand and engineer materials for adhesion in wet environments, was presented by Ms. Kaila Mattson and Dr. Matthew Gebbie.

In the two days of MROP, there were 20 talks given by scientists. To read more about the science that was presented, please see Science and Technology Highlights from UCSB Materials Research Symposium.