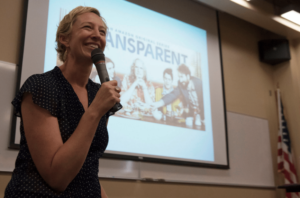 Rachel Gloger is co-founder and Executive Director of the Santa Barbara Transgender Advocacy Network (SBTAN) and a passionate advocate in the transgender (trans) community. Her journey started four years ago when her preschooler revealed she was a daughter, not a son.

Gloger found support, education, and understanding from Dr. Johanna Olson-Kennedy and a group of families at the LA Children’s Hospital, but was hoping for something local. Despite feeling like the only mother with a transgender child in Santa Barbara, she embarked on a journey to see if there were others like her and her family, to hear their stories, and to bring them together.

impactmania interviewed Gloger in her home over a cup of tea. She talked to us about dinner table activism, the perfect storm that allowed SBTAN to grow, and her dreams for the future of SBTAN and her daughter.

How did the Santa Barbara Transgender Advocacy Network evolve?

It grew out of a parent support group at Los Angeles Children’s Hospital my family had been attending for a number of years. We launched a chapter in Santa Barbara and it took off like wildfire, which blew our minds, as a family that felt like we were one of the only trans families in town.

People were really excited to have support and find something locally. We were fielding so many emails from people asking about resources, so we created a website. We started meeting a lot more adults and asked them if they would mentor our teens. We started having community events for the families and trans adults in the community.

And then we started hearing stories – This is what’s working in school, this is what isn’t. This is what’s going on with my doctor. I can’t find a doctor in this town. So I partnered up with Max Rorty, who has been doing clinical trainings for a number of years for hospitals and medical clinics on trans-sensitive care. We worked together to create tailor-made training curriculums for K-12 schools, universities, medical clinics, and government agencies.

We got a grant to write a handbook for the Santa Barbara Unified School District on how to care for transgender students. And we got another grant from the Fund for Santa Barbara to open a center staffed by paid trans adults. It’s a drop-in center and a place for wellness classes, legal need change clinics, support groups, and whatever we dream up. It’s really grown in a year.

Did you anticipate it to grow so fast?

We always joke about that quote from Field of Dreams, “If you build it they will come.” I feel like that quote is very applicable in that we made a space for families and it grew so astronomically beyond anything that I could have imagined. I’m still astounded at the growth and interest and need in our town. Having so many friends with trans kids and becoming a community, a family, is really profound and healing.

The other piece of SBTAN that blows my mind is the high demand for our culture proficiency trainings. When we first approached our school district four and a half years ago with, “Hey, we have a trans kid, let’s figure this out together,” nobody had ever heard of it. We were the first parents requesting accommodations in our school district. Now people are asking to be sensitive, proficient, and kind and overhauling their policies and procedures and really trying to be inclusive of trans folk.

There’s obviously so much work to do all the time in trans acceptance, but I think our town, in a lot of ways, has been making strides to be inclusive.

That’s a lot of change in just four years. What do you think has caused that?

As far as the trainings go, I think word of mouth is powerful.

But also the rising visibility in media was interestingly timed with the availability of a resource. There was this huge spike in media coverage with Laverne Cox on Orange is the New Black, Caitlyn Jenner coming out, I Am Jazz on TLC, The Danish Girl, and Transparent on Amazon. All of these shows and all of these stories. And then the bathroom bills in North Carolina. There was a huge amount of visibility for trans people and transgender safety and a lot of conversation when we were rising as a resource and as a community. It was just a perfect storm.

Also, those of us that started this journey a couple of years ago, when there were no resources, are very passionate about providing those resources to families so that they don’t have to feel the isolation that we experienced. The parents and trans adults in our group are amazing ambassadors.

What have been some of the challenges in launching SBTAN as an organization and being out in the community?

Even in a progressive community there’s still a lot of hesitance, and especially if you’re coming from a more conservative political or religious background. I don’t want to stereotype, but there has always been backslash.

The number one fear that families have about going public is whether their child is going to be safe. A lot of families don’t do press, they won’t touch it, because they’re fearful. Fear takes a lot of different angles. It could be from your family of origin, your employment, or your church. If your employer knows that you’re trans or you’re raising a trans kid, how does that impact your job? If your kid comes out as trans, how does that impact your faith community? Will they be accepting? [SBTAN keeps a list of trans-affirming churches and doctors]

What’s your idea for the future of SBTAN? Where do you want to go from here?

Our goal right now is to build the center, to have infrastructure in our community.

The next goal would be to expand our parent support groups. We’ve had a lot of requests and demand for that. People come to us all the way from San Luis Obispo through Long Beach, so I’d love to have satellite groups.

Another goal is to find more trans affirming doctors to provide primary care and hormones so that our friends don’t have to drive to L.A. or San Luis Obispo. We do have some local providers now, three doctors here and two in Santa Paula, so that’s a big improvement. And we did a big medical symposium in October where we hosted a doctor from Children’s Hospital and two clinicians from L.A. Gender Center. Sixty providers between SLO and L.A. came and learned intensively for two days how to care for trans clients.

My overall goal is just to normalize how we identify and making space for that. It’s just another human experience. 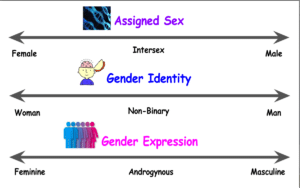 Assigned sex, gender identity, and gender expression all exist on a spectrum, allowing for many possible identities.

What would you recommend for someone who wants to start something like this somewhere else?

This all started with something called “dinner table activism” here in our home. We had different people in the community that we saw as leaders or that we wanted to get to know over at our house for dinner. That was something that we learned from traveling abroad and living in Northern Ireland, from this facility called Corrymeela. This idea of communities coming together and sharing food and experiences was a really powerful example for us of activism.

We went to Pacific Pride Foundation and PFLAG meetings to meet people like us, to see if there were any more families like us. I even went to the adult support group at PPF a couple of times just to see what the trans community here was like. What did the adults think and how was their experience?

You have to get out there and meet people. So much of what we do is networking and making friendships. We work with a lot of non-profits and different universities, and I know I can call them when I need something, or if I need them to train someone else. That’s our main strength.

I think, initially, my hope for her was just that she be safe. That was my biggest anxiety and fear. I really wanted for her to not be known as trans, because it felt safer to me to have her be known as just a girl.

But having learned from different trans adults in the community, I really love the idea of her being proud of who she is, and her gender identity, and all we have gone through to figure this out together. I don’t want her to be ashamed. I want her to know that being trans is a beautiful part of her life, but it’s not the only part of her life either. And she’ll tell you that. She’ll say, “I’m a soccer player; I’m a good friend; I’m an artist; being trans is just one part of who I am.”

What has been a surprising learning for you along this journey?

I’ve been surprised at how many friendships I’ve gained from this. From people from all walks of life that I wouldn’t have encountered before I had a transgender child, being only in the spaces that a cisgender, straight, white woman, and stay at home mom would frequent. I didn’t walk into LGBT spaces. I was going to playdates at the park and back to school night. So I feel like my world has expanded a lot in a really surprising, hard, and beautiful way.

After all these events and dinner table activism and fun, my health took a really big crash, and it was the community that we had cared for and become friends with that cared for my family, and that was really profound.

It sounds like you have lot of amazing people in your life, so I know there are probably many, but who’s one person who’s had an impact on you?

My daughter. My kids in general. I have very magical kids, who have stretched me to the idea of bend or break. And I’ve had to bend and be flexible. Whether it was accepting special needs with my oldest. Or figuring out different gender identity and gender expression through my middle daughter. Or my littlest daughter, who’s very sparkly and fun.

I definitely went into motherhood with a very black and white, cookie cutter idea of what my life would look like and how my kids would be, and that was rocked fundamentally. I’m grateful to the growth that these kids inspired in me.

What’s one word to describe your journey?

When I write I always sign off with, “strength for the journey.” Life is long, and we don’t know where it’s going to take us, so just wishing each other strength, wherever that leads us, whatever that requires.