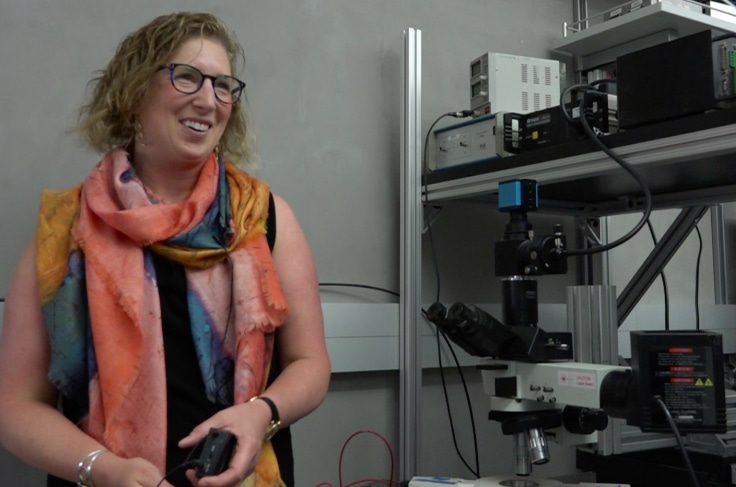 Kimberly Foster is a Professor in Mechanical Engineering and Associate Director, Center for Bioengineering at the University of California, Santa Barbara (UCSB). Kimberly  and her team are working on the Gecko project, where they design and fabricate synthetic adhesive devices for climbing robots. In our interview, she spoke about her latest project: building the world’s smallest hammer — the microhammer — to hammer cells!

Kimberly, what is the Microhammer project?

I was a bicycle racer—crashes are inevitable. Often, you crash your bike, hit your head, and get a concussion. Some people recover well from concussions, some people don’t. People are worried about the effects that these high-impact sports have on the long-term health of our brain, especially with football players. NFL players are subjected to repetitive head trauma, and although they may not show symptoms immediately, this can lead to long-term brain disorders. It seems you get predisposed to diseases like Alzheimer’s and other degenerative diseases after repetitive head trauma. We’re trying to address these concerns with the Microhammer and learn what happens to our brain after trauma on a cellular level. We’re comparing what happens with neural stem cells that are subjected to a mechanical impact to cells that haven’t been hit and looking for changes.

We’ve built this tiny hammer — the Microhammer —which can hit thousands of cells in a very short period of time using microfluidics. Cells flow down a tiny tube towards the hammer, and then when the cells get in front of the hammer, the hammer slams shut. It hits the cell and compresses it to less than half of its thickness. Then the cell flows down a tube, and we can collect it and study it.

I’m really excited about the Microhammer project. For people who build tiny machines, like I do, this is a very exciting time because now, we have the capability for building some amazing tools to study biology that we couldn’t even think of five years ago. The Microhammer, we believe, is the world’s smallest hammer!

What have you learned so far?

Right now, our early data shows that the cells go into a quiescent state. They don’t do anything for a few days and then they start growing again. I’m partnering with a neuroscientist who will investigate the gene expression in these cells. From these studies, we hope to answer questions like: Do these cells turn into different types of cells? Do they do what they were supposed to do or not? There are a lot of things that we’re about to find out because of this machine. As an engineer, when you build a new machine that no one’s ever built before, it takes a long time to convince yourself that it’s working properly and that the results are real.

How did you even come about building this machine?

When you’re a scientist or an engineer, and you have a career of doing research, you’re always looking for a new and exciting thing to study. For me, I wanted to do more outside of what I would consider traditional microsystems. I wanted to do something in biology. Since I used to race bikes, I’ve always been very interested in head injuries even though I don’t believe I’ve ever gotten a true concussion. I thought that this would be an interesting way for me to impact the future of athletes.

What does it take to do all this research, to build a new machine, to collaborate?

A scientist working on these high impact problems involves collaborating with other experts. You must have resilience and perseverance, because these types of experiments don’t all work — and they certainly don’t all work the first time. You also must be willing to learn new things. In order to communicate with people from many different fields, you have to be okay with never being the smartest person in the room. You have to be humble and hungry for knowledge and discovery. 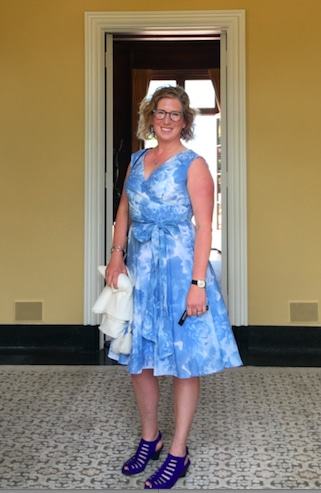 What is one of the most challenging things that you teach your students or that they have trouble grasping?

There’s one thing that I’m trying to address in my mentorship of others. I am a professor first and foremost, because I like interacting with people. I like watching people transition from new graduate student, where they do what you say, to being more of an expert in their project than I am.

I have noticed that especially with female scientists, they run through this hiccup partway to their PhD, where they have low confidence and are worried about not being successful. I’ve noticed it a lot more in females than in males, and so I’m trying to address it.

I’ve developed some alumni mentoring programs with former female students in my lab. This mentoring is important because when you’re doing a PhD — not everything you do will work, a lot of it in fact, doesn’t work. People can get really depressed and think it has something to do with them, rather than realizing that this is just the process of doing science, doing engineering.

The other thing that’s difficult for graduate students is writing their dissertation. They’ve done all this amazing work, and then when you say, “Really, you’re done, you need to write this up.” They have trouble doing that.

Part of it is the idea that the future will bring a lot of change, right? At some point you have to stop being a graduate student and start your own career. That’s a challenge. I think it manifests itself into trouble writing your dissertation.

It’s not even the transitioning it on paper. They’re stopping themselves.

…Of maybe growing beyond these walls?

Not ready, not ready. You notice some interesting things after many years of mentoring.

It’s a great time for microsystems to merge with biotechnology. There are a lot of experiments we can do in biotech that will change the way we understand biology and chemistry and medical device applications.

If you project out, what we will be seeing?

If you look at the commercial cell sorting company Owl Biomedical, they’re doing cancer immunotherapy for stage-four cancers in trials all over the world, and they’re successful. In medical treatments, we’ll be seeing a lot of these tools changing the way we treat illnesses and possibly curing illnesses.

With all this in discovery phase, we will form a better understanding how biology works. That will trickle down to drug manufacturers and how we treat illness. For example, some of my colleagues make microdevices that form stents for arteries and that expand on their own. There are also people developing pills for diagnoses that can take images while it’s in your body, in your esophagus, in your stomach. There are a lot of technologies for medical diagnostics.

We will see a big change. In the last 20 years ago, cell phones were just phones. Today, your cell phone is like an appendage. In it, there are sensors that tell you how fast you’re going, if you drop it, if you switch the orientation of the screen. Technologists call it the sensory revolution. Your cell phone is full of these micro-devices and that’s what makes it cool. In my opinion, the next big thing is this—in the biotechnology field.