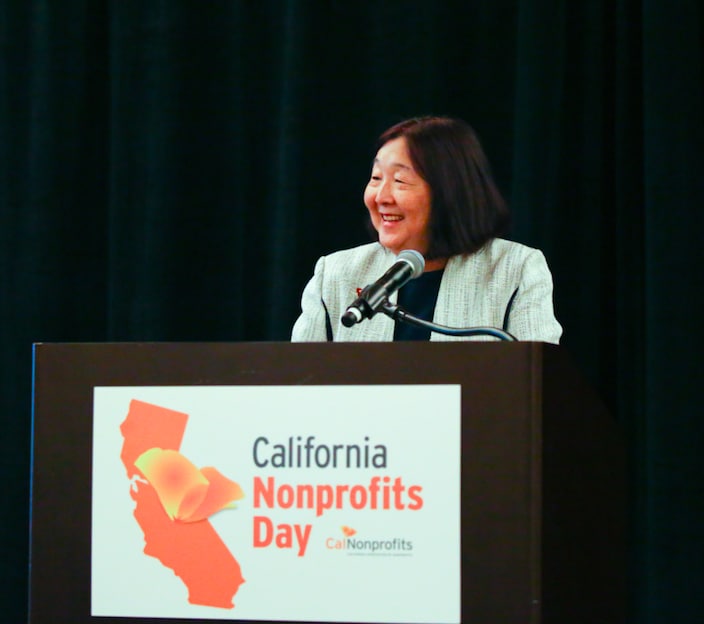 Jan Masaoka has been named eight times as one of the “Fifty Most Influential People” in the nonprofit sector nationwide and was appointed “California Community Leader of the Year 2005 by Leadership California.

Jan Masaoka, CEO of the California Association of Nonprofits, has been named eight times as one of the “Fifty Most Influential People” in the nonprofit sector nationwide and was appointed “California Community Leader of the Year 2005” by Leadership California.

She speaks with impactmania about sector developments, cuckoo ideas, and how to find your role in the community.

What inspired a career in the non-profit sector?

When I started working for a nonprofit, people were involved with causes. People would see themselves as an activist for Asian-American rights or working for women’s equality. We later realized, where we’re working is actually called the nonprofit sector.

A lot of people, for example, in the arts, don’t say, “I want a career in the nonprofit sector.” They get involved with a nonprofit dance organization or they’re in an administrative role and then realize, “I could also do this role for a dance organization.”

What was the cause initially? What jumpstarted this activism in you?

Initially, the Vietnam War and America’s military involvement around the world. Most of all, it was the African American liberation movement and similar kinds of ethnic awareness among Asian Americans.

What did you experience specifically to cause you to get involved?

I was involved in a lot of discussions in the movement where everybody would be thinking hard about what we ought to do. But often what we could do or not do was decided by money as opposed to what we wanted to do.

That led me to pay more attention to how you raise money and how you spend money. I eventually became a nonprofit finance director. I worked for a women’s organization, that helped low income women with employment.

It was a very difficult role, because the organization was teetering on bankruptcy the whole time. But it was very rewarding; for example we had a very effective program that helped women who had recently been released from prison get jobs.

Why did you decide to join Cal Nonprofits as the CEO?

After being a Finance Director, I wanted to have an easier job, because I had young children. I needed something that didn’t have as much responsibility as you have when you’re a nonprofit finance director. I became a consultant to nonprofits.

That led me eventually to serving as the Executive Director of CompassPoint, which is a consulting firm that does management consulting to nonprofits. I was there for 14 years. We were doing a lot of groundbreaking research on nonprofits as well as championing the values and the importance of community nonprofits. In the intervening six years, I wrote three books and started a magazine, Blue Avocado.

Then this opening came up at the California Association of Nonprofits. I would’ve been just as happy, if somebody else had taken the job. I could’ve been a supportive board member! I lobbied several people to get them to apply for the job. None of them would! I took this job because I felt it was important work to do.

Is the nonprofit sector poised to address these large societal and economic issues we have?

Well, we’re bigger than we think. Here in California, one in every 16 workers is employed by a nonprofit — more than construction or the film industry. We generate 15 percent of the GDP. We bring in $40 billion each year from outside California into California. We published these findings and more in the first-ever economic impact study of California’s nonprofit sector: Causes Count.

These are huge numbers. And that is if you only look at the economics and don’t even start to look at the kind of world-changing aspects.

If you stop and think about it, every important idea for social change in the last 100 years has been incubated in the nonprofit community: the idea that we should take care of the earth, the idea that LGBT people should not be discriminated against, the idea that disabled children can go to mainstream schools, the idea that Black Lives Matter . . . yet, we often an invisible sector.

Have you seen a successful collaborative effort between the different sectors?

There is a lot more collaboration between sectors than is apparent to the naked eye. It doesn’t usually work for people from different sectors to sit down together and try to come up with solutions.

What does work is somebody in one sector coming up with a great idea and shopping it around to the other sectors. You need to find people that go, “That’s great! Let’s change it a bit to fit our objectives, but let’s make it happen.”

What strength does each of the sectors bring to a solution?

I think of the for-profit sector as the marketplace for products. A bunch of products get produced, and some get weeded out. After a while you start thinking, “Wow, how did we ever live without this?”

The nonprofit sector can be thought of as a marketplace of ideas. Ideas emerge, some get weeded out, and others become part of how we understand our world and ourselves.

How do you feel about the rise of the social enterprises? They say, “We have ideas, we’re innovative, and make a difference.”

A coffee shop has a financial impact on its owner. Some coffee shops also are a wonderful place for the community to meet.

Don’t you find that there is a blurring of the sectors?

The blurring of the sectors is a cliché. For example, at the beginning all the organizations in the field of alcoholism were nonprofits, whether it was rehab, counseling, or residential treatment.

People thought alcoholism was something that couldn’t be cured or treated. Nonprofits came up with the revolutionary idea that people can stop being alcoholics. People can stop ruining their family’s lives through alcohol.

You can call that the blurring of the sectors, but it is a takeover of the high-end of this delivery system by the for-profit sector.

This is not a new trend. If nonprofits bring forth ideas that become successful, some people will see that as an opportunity to do the work in a for-profit way. They can make money while having the ability to change their minds about service delivery whenever they want to — they typically end up serving the wealthier parts of a certain community.

Do you feel the same about what they call the fourth sector? The new business engagement forms where an organization’s charter is for-profit and for-purpose?

It’s too early to tell. We’re seeing some good things happen. Some small for-profit ventures have always done good work. I perceive some negative impacts by some big corporations setting up these “social enterprises” as a way for them to disguise what they’re doing. We’re going to see a lot of different things happening in this zone.

What about the nonprofit sector? Is there any evolution there that is noteworthy?

Every generation reinvents the nonprofit sector [Laughs]. It’s something that happens. We’re undergoing a generational handover. There is a great deal to be excited about. Every generation does its work, and it’s important work to do.

When I was younger, the word nonprofit hadn’t been coined yet. When my generation started saying things like ‘nonprofit,’ the older generation would think, “What are you talking about?”

We felt we were re-inventing the whole world by using the word nonprofit. Now that’s become the word that is going to be overthrown or maybe not. This is why it’s good that people don’t live forever [Laughs].

Do you see the engagement in the nonprofit as strong as in your generation?

These global economic shifts may have more to do with these changes than generational differences.

With all you have seen, what is required for social impact?

People with vision have always driven social impact. Very often, people with a vision choose nonprofits as the vehicle to make change.

Remember the idea that we should save the earth? It seemed like a fringe idea, right? Those people who had those ideas could have started a company or they could have gone to government. For the most part, visionaries went to the nonprofit sector as the vehicle that they could use to change the world.

Now everybody accepts the concept of caring for the world. They might not agree entirely about how to save it, but people accept the idea that the earth needs to be taken care of, which didn’t use to be true.

What is the best way for people who are engaged with jobs and families to become involved and support issues?

People are sort of semi-intentional about their professional career, right? You get one job and it leads to another one. You may have an overall intention: I want to be in insurance, but you don’t really plot it out ahead of time.

You have to think about having the community career in the same way. You might take a volunteer position somewhere and realize I don’t want to be insurance anymore, I want to get involved with animals.

Think of having a community career, like a professional career. That means moving around different organizations, seeing what you like and seeing where you can be successful.

What is your motivation to give?

Some of it is because a good friend of mine is involved with an organization and I want to be supportive of her.

There are some organizations I believe strongly in — the ACLU is an example of that. The ACLU shares their money nationally. Mississippi, Alabama, and other states may not be as able to raise as much money as California. However it is important that there is ACLU in Mississippi, it will receive some of California’s funds.

The other thing is that my husband and I give more money to political causes than we give to nonprofit causes, because who’s in office and what ballot propositions are huge impacts on the world.

What’s next for you, Jan?

I’m on the board of MapLight, which is a nonprofit that investigates and shows the influence of money in politics. I also volunteer for Asian-Americans for Community Involvement, which is an Asian-American health clinic. I try to be intentional about my community career as well as my work career!

Jan Masaoka is the Chief Executive Officer (CEO) of the California Association of Nonprofits and is a thought leader on nonprofit organizations with emphasis on boards of directors, business planning, and the role of nonprofits in society. In her capacity, she has been coaching people in the nonprofits nationwide, either through her speaking engagements or through Blue Avocado, an online publication she wrote before until 2015.