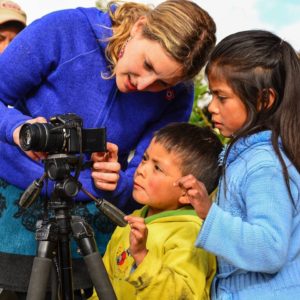 Sara Calvo, CEO and co-founder of Living in Minca and former senior lecturer at Middlesex University in London, is a certified social enterprise advisor and has provided consultancy services for a wide range of NGOs worldwide.

For her PhD research, she conducted case studies of a dozen social enterprises. Just a few years later, she’s found that of those twelve organizations, only three have survived.

With Living in Minca, she set out to connect and support the social enterprise ecosystem in Colombia.

Sara, you have been teaching social entrepreneurship in England. What is it like now that you are building one in Colombia?

It has been an adventure!

At the start, it was more like a project to support grassroots social enterprises, in terms of building capacity, connecting them with each other and with resources, and also documenting their stories.

When you do research, you visit an organization for a few days. When you start your own project, there are complex challenges; it is often difficult to address problems and even opportunities. We set up a consultancy arm, with training, marketing and design, and help measuring impact. I realized that there’s a need for more support even in the U.K. where there is a greater advancement in terms of policy and regulations. So I thought, what about social enterprises in Latin America, Africa, and Asia?

What surprised you building a social enterprise after researching the sector?

Academia is too positive about the sector. It looks easy and simple. When you start your own or look closer at other organizations, you realize that it is not an easy journey. Academics are supposed to be objective and critical, but I guess with social enterprise, because it’s a social good, the passion sometimes doesn’t allow researchers to look for the difficulties.

Give me an example of what was spoken about in theory and what you saw in the field.

There’s a famous framework developed by a professor called Nicholls. He talks about the three different types of social enterprises.

One is the hero entrepreneur; it’s the U.S. model of highlighting social entrepreneurs as change makers. The U.K. model is more focused on business and a combination of the social and economic impact. The third model is what is called a community model. The European approach is focused more on cooperatives.

When we visited indigenous communities in Latin America, they didn’t have a comparative model. They are applying the philosophy of Buen Vivir: the state of well-being, an indigenous approach to understand the way we live in harmony with nature, community, and ourselves.

In Africa, as well, particularly in East African countries, we noticed some of the traditions like Ubuntu, for example, which is the philosophy of understanding solidarity and community, which doesn’t come up in the West.

Measuring social impact is still such a murky area for investors. How do you measure social impact? What have you found that works?

Yeah, this is another thing that I found interesting. Going back to these indigenous organizations that we visited in Latin America, the way they were measuring impact was focused on the paradigms that they have in their own communities, in terms of culture and Buen Vivir approaches.

What would they measure? For example, one organization in India measures development through the girth of the arms of the daughters — the girls receive the least protein. Over the years, they can see the impact by keeping track of the upper arms of the girls.

With indigenous communities, there is more focus on happiness and good personal relationships in the community. They highlight the importance of nature.

Obviously, we have some green social entrepreneurs, but people see this as something separate. These indigenous communities are actually looking at nature as a whole, as part of everyone, basically. 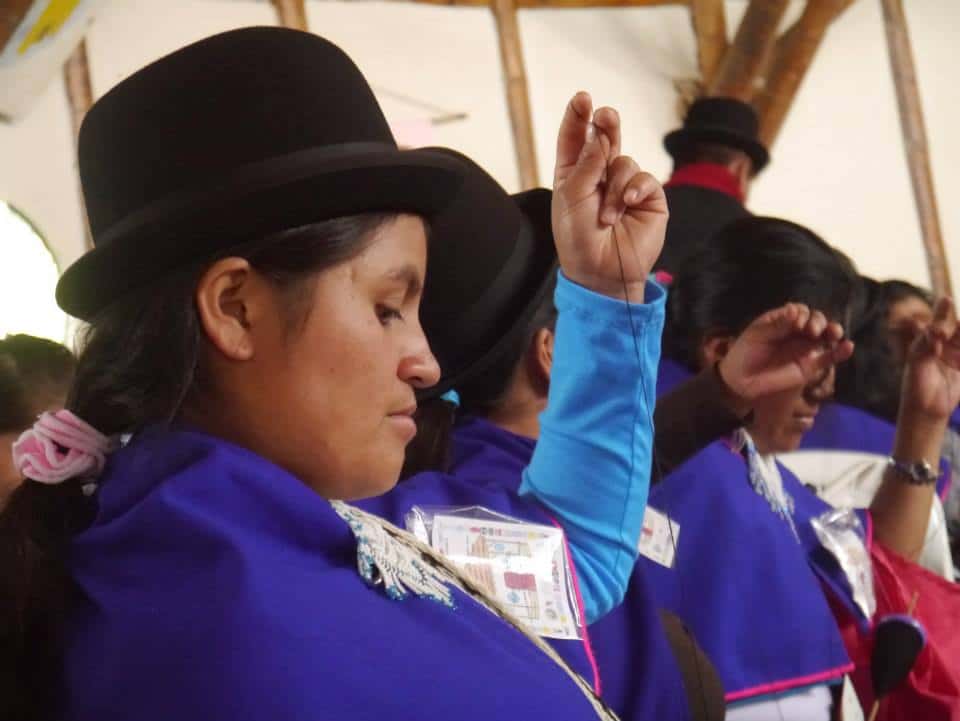 Women from the Misak community sewing — indigenous people whose territory is in Cauca, high in the Andes mountains in Colombia.

Social and environmental impact should not be just left to social enterprises; it could be part of every job and organization. It is everyone’s responsibility.

Yeah, definitely, I agree. But we tend to divide.

In Colombia, you have worked with organizations such as Circo Para Todos and the Bogotá Waste Pickers Association. Tell me a bit more about the state of social entrepreneurship in Colombia — what does the ecosystem look like?

Social enterprises in Colombia are gaining momentum. There are different approaches. The biggest thing that we are looking at creating is a network. There is no connection between the different organizations and people. This is perhaps the reason why the social class gap is huge.

I love the Bogotá Waste Pickers Association; it is set up by waste pickers to survive — because waste pickers were actually assassinated. Can you believe this? They were killing these people in Bogotá and in other places in the country. Obviously, they developed this social enterprise out of necessity — for survival, as a way to be together and to protect themselves.

Do you have an idea of the number of social enterprises in Colombia?

No, this is something we hope to find out. The Colombian government started a website and has a few reports with the 10 most successful social enterprises, but the researcher’s world is very limited. 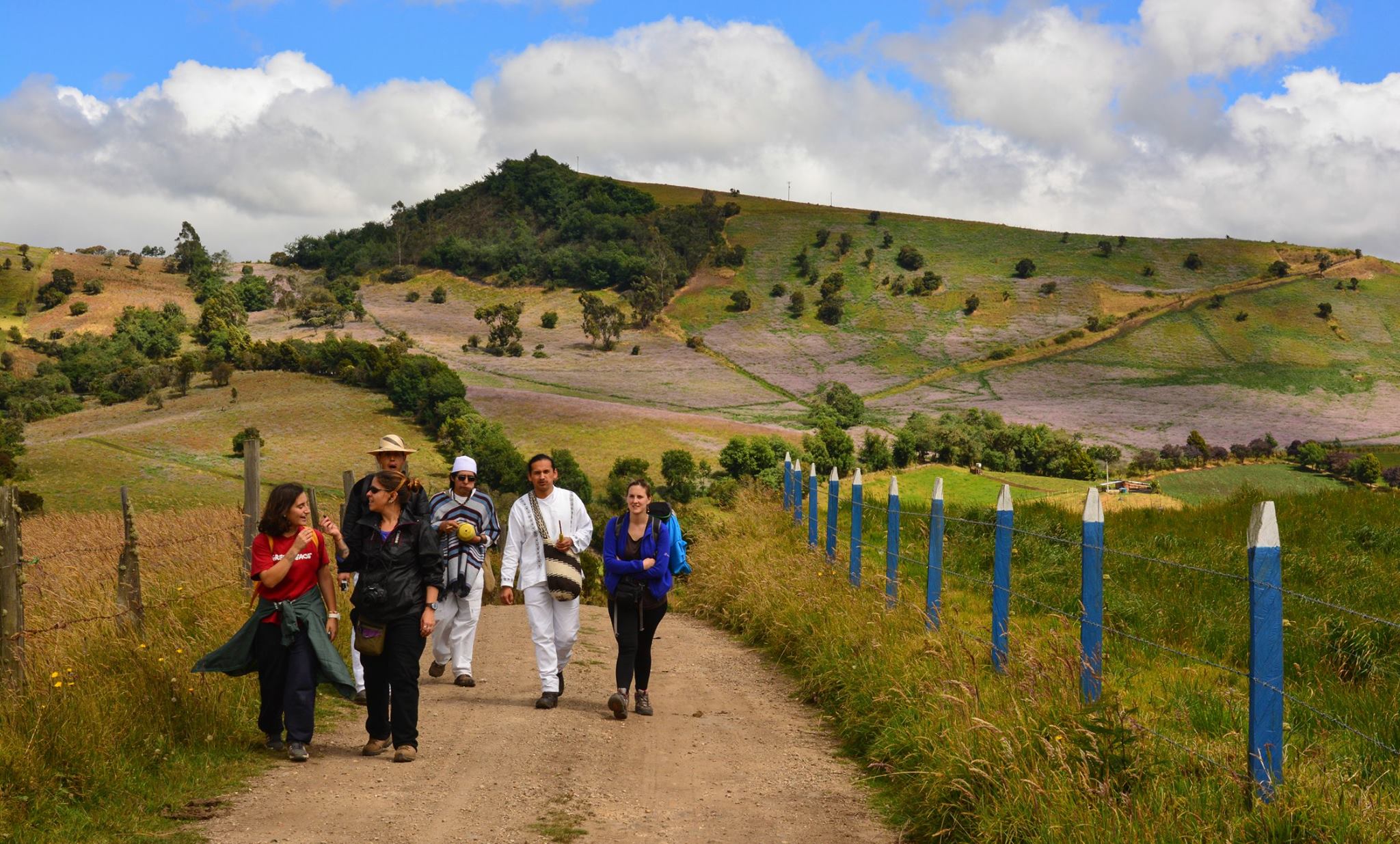 Sara Calvo walking with the muisca community [one out of four advanced civilizations of the Americas — apart from the Aztec, Mayas, and Incas] in Sesquile, Colombia.

How supportive is the Colombian government?

They were very interested in social innovation. In fact, they started a policy based on promoting it. They created a department and even have a Center for Social Innovation.

But the last couple of years, they have been occupied with the recent peace accord [between the Colombian government and the Revolutionary Armed Forces of Colombia (FARC)]. There should be a revived interest, because what is going to happen with the millions of people who have been part of the war?

With all the research you have seen and the experiences in the field, what are the ingredients to drive social impact?

The ones that survived were well connected, even if they didn’t have money. One of the drivers of social impact is to be at the right moment with the type of services you’re offering. The type of support the government or the public sector is giving also matters, because when I did my PhD in the U.K., there was a transition to the conservatives that stopped all the support.

Another driver for social impact is to have a clear business model relying on funding or donation. From my experience, the ones who follow a sole focus on the social aspect of the organization don’t last long. Without funding, they cannot survive.

Being persistent is important, as well.

When academia talks about this hybrid model, economic and social, they can be very idealistic. The reality is that social entrepreneurs often tell you, “Well, at the beginning, I was trying to do both, but then I realized I couldn’t do both properly. I had to focus first on the economic side to make sure the social was going to happen.”

Who has made you the social entrepreneur that you are today?

I grew up traveling around Spain with a caravan. A lot of my friends were gypsies and people from disadvantaged communities. I guess that makes me have a very open mind.

I was very lucky as a child because I was able to travel throughout the country meeting a lot of people from different locations, with different problems. It made me feel like I wanted to help offer solutions. I didn’t want to have a job that focused only on the economic side; I wanted to make something that benefited communities.

What did you see specifically that made you realize that you wanted to help bring solutions to communities?

My mom always said that I used to save the animals everywhere and tried to protect the kids I met. When I studied in a boarding school, we had a lot of nuns that would bring the word in Africa and other countries, they used to tell us all these stories of different problems. When I was 17 years old, I wanted to go to Chiapas. [Laughs.] Obviously, my parents didn’t allow this — too dangerous.

What’s next for Living in Minca?

The plan is to establish more projects in Colombia. We have a good relationship with the Social Innovation Scientific Park, which was established by the UNIMINUTO University. The idea is to create projects to support social enterprises. I would also like to support the creation of a Latin American network. Colombian social entrepreneurs should be able to connect with those in other countries, to learn from each other and work together.