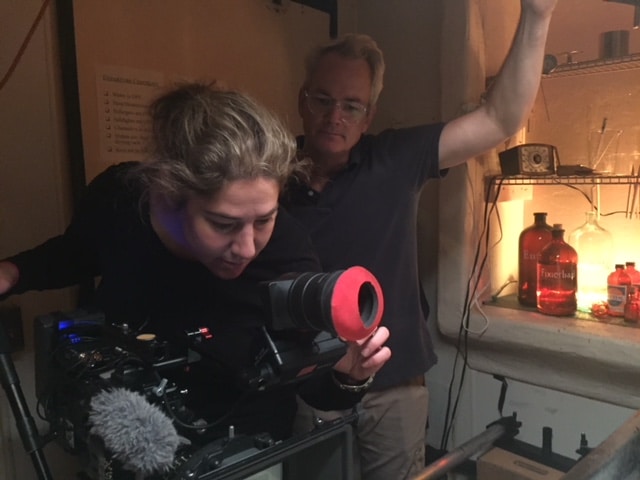 Laura Bialis, American-Israeli filmmaker, spoke with impactmania about her documentary films, Tak for Alt – Survival of a Human Spirit (1999), Refusenik (2007), View from the Bridge: Stories from Kosovo (2008), and Rock in the Red Zone (2014). She is currently filming the life of Russian-American photographer Roman Vishniac through the eyes of his daughter.

What are the stories that need to be told?

Obviously the world seems to be crumbling. There is non-willingness to understand; there is division and polarization. It is a real challenge because people pick sides. Ultimately, individuals from two extremes end up kind of converging.

People tend to watch things that support their thinking. The people you’d most like to watch your documentaries are probably not watching.

Yes, I had an interesting experience with the last film I made, Rock in the Red Zone. I heard about a town, Sderot in Israel where there were rockets getting launched over the border from Gaza. This town is famous for its music, and it is fascinating how musicians are dealing with living in a continual war zone.

It took me many years of filming, because I ended up moving there and marrying one of my subjects. [Laughs.] It was challenging to tell a story in this highly politicized area, because you would find that people have built up stereotypes in their minds. Most of the people in this town are people of color: Moroccan, Kurdish, Iraqi, and Ethiopian. They are on the receiving end of the rockets.

We went to a college campus where we were having a screening. Somebody had covered up the posters with flyers indicating this was an “anti-black movie” because there was a campaign to stop people from watching the film. It was ridiculous that they considered it an anti-black movie since they even did not see the movie and clearly knew nothing about it.

The main characters are from Africa as well as Middle East, and they are also the victims in the story. When the film posters were covered, it was an informative moment about what happened to our society—on the right, but also on the left—and how people build these divisions. Everything I have done in my career tries to break down divisions.

How do you check your biases as a filmmaker? In other words, how do you approach a topic with open eyes?

That’s a really good question. It depends on what the subject matter is. I made a film in Kosovo and in that case, I went in completely unbiased. There was a prevailing bias in the media toward the Albanian Kosovars, and against the Serbs. Our media chose a good guy and a bad guy, even though it’s a complex situation and there is always another side to the story.

Bill Clinton and NATO launched a bombing campaign in 1999, to try to stop the ethnic cleansing trending at that time. The film was about what happened after the war. This country was basically a territory managed by the United Nation (UN). How do people pick up the pieces in a society where they were at war with their neighbors?

There were very absurd circumstances. People had to flee from one area of a city into another area to be safe, so they crossed over the Ibar bridge in Mitrovica and squatted in other people’s houses while they could still see their own houses across the river.

I tried to interview Albanians, Serbs, and Roma (Romani people) who were impacted by this situation. The film ended up being a series of vignettes about experiences of people from all different sides during and after the war.

In the editing room, you realize that your biases are totally ingrained in yourself, even if you think that you go in completely clean. I was raised to be a non-racist, so if somebody makes a racist comment, that’s bad, right? When I overhear someone make a racist comment, I immediately have a judgment.

In the film there are Serbs who said very racist things about their Albanian neighbors. At a screening we held on the Albanian side, this outraged the Albanians. They didn’t understand that we were trying to say, “Well look, this guy on the other side is a racist.” But at the screening on the Serb side, they were like: “Yeah, we’re glad someone said it.”

Growing up in America, I already have a bias: if a racist comment is made, that is a bad thing, which is already a bias.

As a filmmaker, you hold so much power. In the editing room, you can pick certain comments and leave out others to make your point.

We had an interesting moment while editing my first film about the Holocaust survivor, Judy Meisel. Judy was obviously very emotional while telling her story. We found that it was hard for her to complete her sentences or to speak with the proper pronouns because she was just so involved in the story.

We found ourselves taking words from different parts of her narrative and patching them together in order to create meaningful sentences. I was a film student, 24 years old, with friends, Broderick Fox and Sarah Levy, on summer break. We rotated in six hour editing shifts, so the editing system would be always working. At one point, we said, “Is it okay that we’re taking words from here and put it there. Is that ethical?”

We brought over one of our professors, the fabulous editor Bill Haugse —the editor of Hoop Dreams. He came to our editing room and said, “It is ethical if you’re helping your character tell the story the way she would want to tell it.”

Then he said, “By the way, this is the reason that I won’t go see any film, unless I know a lot about the filmmaker. I have to know where he or she is coming from.” Anybody can make anyone say anything.

Is there anything I particular that civil rights activist Judith Meisel said that stayed with you?

Judy lost her mother in a gas chamber. She had her hair torn out by the roots, and she was beaten. But when she is speaking to students, she brings it down to the students’ experiences—on the level of what’s happening in the school. For example, bullying: are you making fun of someone because they’re fat or gay? her who life she has been really driven to share her story, that her story could help people. If they understood what she had gone through, they would see the world differently.

Having her as my first subject—someone who was so committed to making positive change and never giving up—informed my entire career. She said, “Don’t say that there’s nothing I can do. One person can make a difference.”

Did you have any challenges being a female filmmaker?

My colleagues in the documentary world are more like activists, who are trying to make an impact. This is a kinder universe than the regular Hollywood scene. But, it is really challenging for female directors to be noticed. I realized that if I found a subject that I was passionate about, I could raise money, pick up a camera, and not have to wait for somebody to give me a chance.

What is your advice for aspiring film students?

You have to strongly believe in your story. What message are you trying to get across? Who or what are you making this film about? It might take a long time to raise the money. Some of my films have taken eight years to make. It’s got to be meaningful enough for you to stick with it until it’s done.

For Refuseniks, you even met Mikhail Gorbachev (former President of the Soviet Union).

I did meet Gorbachev. I also interviewed one of the former heads of the KGB. Both of these experiences were completely surreal. The former head of the KGB denied everything: there were no Refuseniks. [Individuals, typically but not exclusively Soviet Jews, who were denied permission to emigrate by the authorities of the former Soviet Union].

Refuseniks are a great example of a completely unbelievable situation. We are so privileged in California, because we can say whatever we want, but speech control is still happening all over the world. Sitting across from human rights activist Natan Sharansky or Israeli member of parliament Yuli-Yoel Edelstein, we see that there are people who spent years in Russian prisons, because they wanted to teach Hebrew, or because they dared to say: “This is not just” or “I want to leave this country.” By seeing the horrendous physical trials they went through, we realize free speech should always be safeguarded.

Give me an example of how you safeguard free speech.

We have to stay vigilant. Again, political boundaries have been blurred. When we look at what’s happening in Washington D.C.—where people are getting fired left and right if they oppose the [current U.S.] President—that’s not how the country was built by our founding fathers.

In the same vein, on the extreme left, it’s become commonplace that people are denied to speak in universities, because a politically-correct mentality is prevailing about a certain issue. Israel is a subject that I am very connected to, and it’s a disaster in that regard. There can’t be only one point of view, because that’s not free speech either.

After people become aware of these societal issues, what is a simple step people can take to make a difference?

Don’t silence people and don’t keep quiet. The work I am doing is anti-silence. In some cases, I feel I made films because people didn’t have a voice and they had no way to tell their stories.

I am working on a film called All This Life: The Many Worlds of Roman Vishniac. Vishniac was a photographer who lived in Berlin during the ‘20s and ‘30s. He was sent by the American Joint Distribution Committee, a Jewish aid organization, into Eastern Europe from 1935 to 1938. He took pictures of small Jewish towns and communities, mostly impoverished. Then, within a couple of years, most of those people and places he documented were gone. He is known for capturing the last records of this civilization. A Vanished World was published in 1983.

His daughter, Mara Vishniac Kohn (who is now 91 years old) was married to the late Professor Walter Kohn, a refugee on the Kindertransport from Vienna, who was awarded the Nobel Prize in chemistry in 1998. I’m making this film about Roman Vishniac through his daughter Mara’s eyes and memories. She was six when Hitler came to power.

That must be very intense.

It’s very intense. Mara has given the access to all of Roman’s work. It’s a goldmine of beautiful photographs. Her memories are so vivid. I am constantly reminded that this is the last generation of those who were there. She doesn’t consider herself as a Holocaust survivor, because they escaped from Europe in 1940 and she was never in a camp. But she was a refugee from Europe, and the whole refugee experience has parallels with the one we see today.

Laura, what will your story line be?

That’s a real hard one. I’ve filmed in Gulag camps in the middle of Russia, in post-war Kosovo, where we were afraid of walking on landmines. We filmed in prisons, in psychiatric hospitals in the Ukraine, and in Nazi concentration camps. I filmed and lived in a war zone in Israel. With documentary film making you really get involved, even if you don’t marry your subject matter. [Laughs.]

With every film my worldview has been changed somehow. That is why I love what I do, because it’s always challenging your assumptions about everything.