“We women need to make sure that we do not emulate men the way some men exhibit leadership, force, and power. This is our chance to show leadership and power in a new way.”

Zainab Salbi started a grassroots organization dedicated to serving women survivors of wars. Under her leadership as CEO (1993-2011), the organization grew from helping 30 women to more than 400,000 women in 8 conflict areas.

During one her 10 appearances on the Oprah Winfrey Show, Zainab mentioned she starts her day with reading a passage by Rumi, the thirteenth-century poet, jurist, and Islamic scholar.

What Rumi quotation did you open up on today?

There’s completeness in every person, and there is no need to compare. I’ve never read it before while I open up the book daily.

Tell me more about the big trip you’re going on tomorrow.

I’m going to Fiji for one week to speak to young entrepreneurs. I had my memoir, Between Two Worlds: Escape from Tyranny: Growing Up in the Shadow of Saddam (2006) published there.

The trip will then lead to Turkey and Georgia to film young women in the region. Women from Syria, Palestine, Saudi Arabia, and Egypt are fighting to make a difference. I’m doing a series about their journeys. Then I go to Kenya where a small group is gathering from all over the world to talk about conservation: how do you preserve and care for the animals?

With all these projects and your past experiences founding and running Women for Women International, what is required for social impact?

One must inspire a few goals and believe in the possibility of change. For me, that is the most important ingredient. Inspiration is not only in the success, which is important, but also in talking about the challenges. Everyone who lives through change, whether they are social entrepreneurs or activists, deals with challenges. When we share our stories, it helps people know that they are not alone.

Even though on a day-to-day basis their lives may feel lonely, they’re not alone. The community may not be in your surrounding area. It may be this person in London, and this person in New York, and this person in Turkey. That’s how I formed my community, by fostering a global awareness that there are other people out there fighting the fight.

I usually pick up the phone. I do my research, and I call. What’s happening? Who needs help? How can I send help? Who are the people involved?

And that doesn’t take money. It needs time. It needs persistence. Many years after founding Women for Women, I decided to do something different and started a whole new journey with The Zainab Salbi Project. How do we feature women’s voices in areas where there may not be the possibilities of change from within their own culture or religion? I started exactly the same way.

When we see injustice and look the other direction, we not only legitimize that very injustice, we allow for change in our own values. How can I tell you that I believe in this value, while when I see something and I don’t act on it? I need to show up for me, not to make anybody else happy or give me awards.

I interviewed girls and women in countries such as Pakistan. They’re very strong and vocal. When I asked them how that came about in a society where those traits are not really appreciated, they often said they had the support of their fathers. How can we encourage more fathers and brothers—more men— to be strong supporters of women?

It’s a good question. When you’re a child—even if you are girl—society actually tells you, “You can do anything, honey. You can be anything you want. You choose whatever.” They keep that freedom until the girl has her period or her breasts appear. Then it is, “You cannot say this. No, you cannot wear this. No, you cannot go out.” All of a sudden society starts chipping, chipping away. It’s very confusing for the girls in these cultures. Because we are told that you can do anything you want growing up, but then we grow up and we can’t.

As loving as my father and brothers are, they gave me a hard time about everything. This is a big secular liberal family, but they didn’t want me to be out there telling our stories. They are part of my success, but not part of the journey. For them to understand what I’m fighting for is a challenge.

I feel there is a crisis of masculinity right now. Women are finding their identity in their voice and not allowing themselves to be silenced anymore. Men’s worlds are crumbling down, because that old form of power is no longer tolerated.

We women need to make sure that we do not emulate men the way some men exhibit leadership, force, and power. This is our chance to show leadership and power in a new way. The biggest mistake would be to become the masculine definition of power. Then we have failed ourselves.

I am appealing to men’s hearts to show compassion to women’s plights. 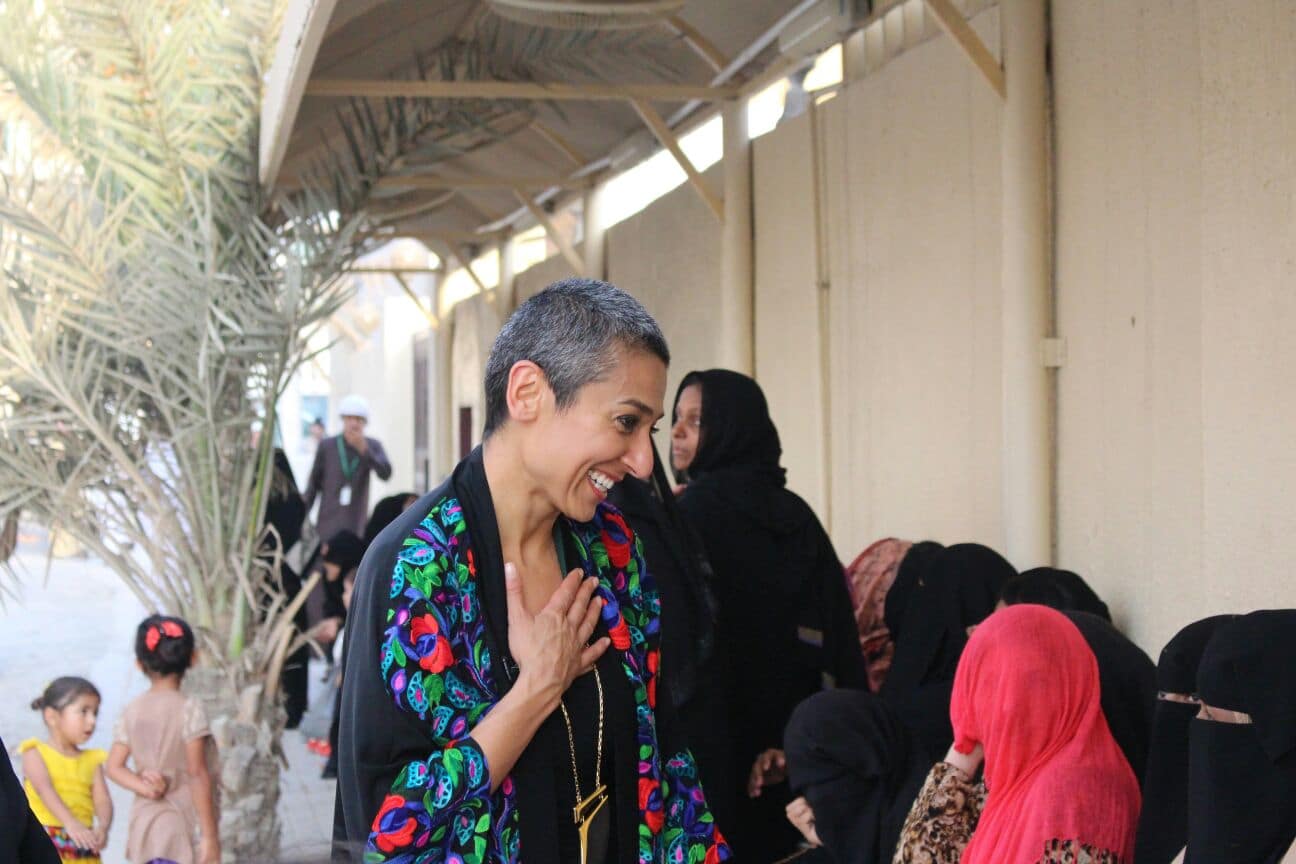 We have interviewed 130 women of impact in 30 countries. A lot of these women tell me that, sadly, they wished they had better support from other women. How can women be better supporters of other women?

Because we look at the men, and sometimes sisterhood is not really there either. For women, this is even more devastating. If a man says something, he may not get it. He doesn’t understand what it means to be a woman. When a woman says something negative, the dagger goes much deeper in the heart.

I came out of these experiences by realizing that what we want to do is to stop acting out of scarcity. For many years we have been fighting over a single seat at the table. We always celebrate that one seat: the first woman board member, the first woman executive. The fight should be to make the table larger and we haven’t done that.

It’s similar to the images of refugees fighting over food. People say, “Look at these savages. Look at these barbarians.” But they’re fighting, because there is no food. If they are provided with a Whole Foods, the first day they will raid it. The next day, they will not because they realize there is food for everyone.

That’s how women are operating, thinking there are no seats. My vision is not to celebrate the first woman; it’s to celebrate the second and the third. I want 50 percent of a table’s representation, panel discussion, or books to be by women. It’s just fair.

The shift will happen when women support other women. When women are not supportive, it comes from scarcity and from jealousy. “How dare she have this, and I don’t have it.” But I say, consider your behavior as a woman. No, we don’t need to operate out of scarcity. There is plenty for all of us.

You mentioned your mother. What were some of the things she said that stayed with you?

Never let anybody touch you or talk to you in the wrong way. Never allow this.

When I was touched in a wrong way, I screamed and put a stop to it immediately. Sometimes I failed, but my mother gave me permission to not allow it. She told me to always be strong and always be independent.

Because I left my country, I have been independent since I was 19 years old. I found out my mother also meant for me to be financially independent. My life has always held that thread. She told me never to cry, which I disagree. I never cried until I was in my mid-thirties. When I wrote my memoir, I poured out oceans of tears.

When you wrote your memoir, what did you cry about the most?

The whole story. I don’t know how to deconstruct it. I kept the story in a chest box and hid it. When you open the chest box, all the stories come out. Right now, I believe very much in showing my emotions. I just finished a new book called Freedom is an Inside Job (2018).

I own every emotion, and I advocate for owning each emotion. I don’t believe we need to have the mask of sense or perfection. I think we need to take our imperfection next our perfection, to put anything emotional and psychological right out there physically,

To be very honest, I don’t buy into the whole deception of warrior woman and wonder woman. I’m a human being; I’m not a superhero. This is for all of us. This idealization in our beauty, our strength, or our power is hopeless.

It’s even more stressful. When the film Wonder Woman (2017) came out, I thought, “And now, we have to be all like her?” How unhealthy is that?

Exactly. That’s what I mean by let’s make sure not to emulate masculine power. It would not be healthy if men celebrated Superman as a role model. We don’t need to create another superhero. The superhero is the Malala of the world. She’s shot, and her face still suffers from the injury.

For me that’s the superhero, the imperfection and the perfection, the beauty and the absence of it. It’s everything: the light and the darkness.

Let’s talk about how we were connected and about another Woman of Impact. How do you know Marla McNally Phillips?

Marla and I have a mutual friend, Nancy Koppelman,[2] who was a very dear friend. She was a wonderful, wonderful woman, and she supported my Women International efforts.

I come from a country that is completely destroyed. Every part of my memory is destroyed. When my father and I talk, I tell him we are the lucky ones. People may say, “My gosh, you are so brave. You have been in an arranged marriage. You have gone through all that.” But I respond, “No, no, no, I am the luckier one.”

Tell me something Nancy said that stayed with you.

I called Nancy. Her mother’s house had just burnt down, and she said, “She’s well, she’s healthy. Only material damage.” Last year I went to my own house in Iraq, and everything from my memory of my home was destroyed. I looked at it, and I remembered her saying. “We’re still okay.”
The United States is not innocent from that destruction; it led to that destruction. It’s very sad. How do I deal with these emotions? Do you choose to do something good with them? Do you choose to say, “I’m going with compassion, dialogue, love and to understand each other rather than to fight?”

Is it conflicting for you to live in the United States? This country had a hand in what happened to your home country.

[1] Zainab Salbi was eleven years old when her father was chosen to be Saddam Hussein’s personal pilot.

Norlha Textiles: Made from Memories and Miracles